Mammalian Securin which has been isolated initially from rat pituitary tumor cells as pituitary tumor transforming gene (PTTG1) is an oncogene and has been implicated in the development and progression of several malignancies. It encodes a protein which prevents separin from promoting sister chromatid separation during mitosis. Earlier higher expression of Securin, induction of precocious anaphase (premature separation of sister chromatids) and chromosomal instability have been observed to be significantly associated with an increased risk of raw areca nut (RAN) induced oral, oesophaegal and gastric cancers in both human and mouse. Thus it is been proposed that Securin level be considered as a molecular marker which can be a potential therapeutic target for many cancers. Since the mechanism of upregulation of Securin is still unclear, the present study is intended to look for epigenetic histone modifications pattern because such modifications do have profound effects on gene promoter activity. Likewise the effect of micro RNAs on epigenetics is an area that needs to be explored. Micro RNAs or miRNAs are small RNA molecules that are known to negatively control their target gene expression post transcriptionally and they've also been linked to cancer development. In our case as well, several miRNAs have been selected through in silico analysis (TargetScan, miRbase). The target for these miRNAs is 3' UTR of Securin primary transcript. Thus, it can be said that this investigation will play a pivotal role in understanding induction of carcinogenesis in mammalian cells.

Research over the years have shown enough evidence to implicate areca nut, as a potential carcinogen in humans. People in North-Eastern states of India consume raw areca nut (RAN) and lime which could lead to oral, oesophaegal and gastric cancers. (Singh V, et al, 2015) In Meghalaya, India, the variety of areca nut is used as raw and unprocessed form whose chemical composition and pharmacological actions have been reported. (Kurkalang S, et al, 2013) Yet very little is known about the areca nut induced carcinogenesis pathway. In our approach we're trying to device an epigenetic approach in relation with the use of selective micro RNAs. Micro RNAs are 22-25 nucleotide long non-coding RNA molecules which are encoded in the genome that can have a profound effect in controlling gene expression. More than 30% of human genes are believed to be targets of miRNAs, which signifies that miRNAs do have a comprehensive impact on transcriptomes and proteomes of eukaryotes . (Valinezhad Orang A, et al, 2014) They can bind to their target mRNAs and downregulate their stabilities. While binding to its target mRNA with full complementarity, this miRNA can lead to the degradation of the target. (Plotnikova O, et al, 2019) Micro RNAs can also bind to their targets with incomplete complementarity, often in the 3' UTR regions, and this leads to the translational suppression of their target genes by a mechanism that is yet to be completely understood. We know that each miRNA is predicted to have many targets and each mRNA may be regulated by more than one miRNA. Micro RNAs have recently been shown to be linked with cancer and they can act as tumor suppressor genes. One more important criteria for using miRNAs for our research is that they may also regulate chromatin structure by regulating key histone modifiers. So, it's clear that screening of target specific miRNAs is a necessity for this study.

Statement of the Problem

We need to find out the stable miRNA sequences that can attach to the 3' UTR of the primary Seurin transcript and degrade it.

The current objective of my research is to look for the possible miRNAs via in silico analysis that can bind to the primary Securin transcript.

The binding sequences are to be identified and analysis of the data obtained is required.

In silico analysis of predicting binding regions or screening against a primary mRNA transcript is largely dependent on several bioinformatic tools and softwares. With time these tools have improved and have become accurate enough to be held accountable for solid research. The current research focuses on screening miRNAs and finding out their binding sequences and carry out an extensive understanding on the various parameters involoved.

Already available research in the present domain definitely throws some light on the work I've done. Securin was monitored since over-expression of this gene plays a role in carcinogenesis. Kurkalang S, et al, 2015 Histopathological preparation of stomach tissue of mice revealed that RAN + lime induced stomach cancer. There was a gradual increase in the occurence of precocious anaphases in both RAN + lime treated mouse as well as in human heavy chewers. Levels of Securin were increased in these cells during the early days of RAN + lime exposure. The levels of securin were significantly higher in the human tumor samples than their adjacent normal counterpart. Kurkalang S, et al, 2015 Thus it was proved that overexpression of Securin was associated with the increased consumption of RAN with lime and thus these parameters were considered of early diagnostic value going forward to my own research. So, since miRNAs have shown to have regulatory effect on transcription of genes, I'll be screening miRNAs keeping the Securin/PTTG1 gene as our target.

For the process of screening of miRNA against the target securin transcript I've used a couple of open access webserver tools available in the public domain.

Firstly, I've used TargetScan, or rather TargetScanHuman 7.2 (Agarwal V, 2015 ) for finding out certain sequences of miRNA that appear to be best fit with our PTTG1 gene transcript in relation to context scores and overlaps. Then, the resulting miRNAs selected across several criterias which will be discussed later on, were then further analysed using miRbase. (Kozomara A, et al, 2019 ) Now since mammalian-specific miRNAs have far fewer conserved targets than do the more broadly conserved miRNAs (Friedman R.C, 2009 ), this tool (TargetScan) enables statistically powerful analysis of individual miRNA target sites, with the probability of preferentially conserved targeting (PCT) which is done correlating with experimental measurements of repression.

In general, the sites that match the miRNA seed, essentially which are in 3' UTRs are conserved. Targets are predcited easily by looking for the 6-8mer matches to the miRNA seed region. (Lewis GB et al., 2005) TargetScan predicts two types of 7mer sites in addition to 8mer sites. 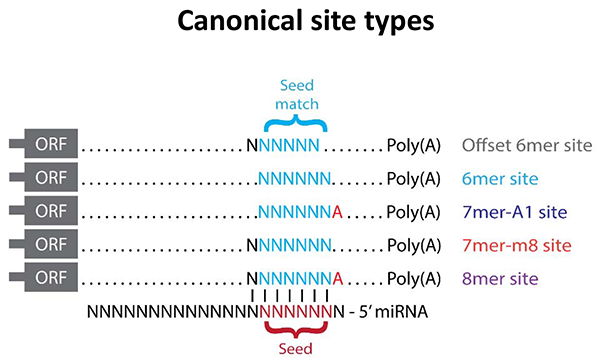 7mer-A1: This is an exact match to positions 2-7 of the mature miRNA (the seed) followed by an 'A'

First TargetScan webtool was opened and under species section, 'Human' is selected. Next, under the Human Gene Symbol section, our target gene PTTG1 was selected. Then I chose Broadly Conserved microRNA families from the drop down of step 3. This was the first step of the process, and subsequently the relevant results were obtained.

Next, taking the results of our first step, we handpicked certain microRNAs based on their context scores and conserved branch lengths, which will be elaborated in the results section, and found out individual binding sequences, taking into account their probability of preferential conservation. These miRNAs were then subjected to sequencing using miRbase (Kozomara A, 2014), to find out other related properties.

TargetScan analysis was done along with sequence identification with miRbase and miRDB.

The conserved miRNA sites that were obtained from the first step of the process from TargetScan are:

Because of similar scores and site of binding, I selected hsa-mir-655-3p which has a higher negative context++ score. Upon clicking on the view table of miRNAs link on the left corner of the results page, we get the miRNA families conserved only among mammals sorted based on their cumulative weightage score:

Now, context score is a sequence based score for individual target sites that is calculated by TargetScan. (Grimson A et al., 2007) Targets with lowest context plus scores are generally considered to be the most representative ones. (Garcia DM et al., 2011) It is been used for the analysis of preferentially conserved miRNA-pairing motifs within 3' UTRs.

Again, TargetScan conserved branch length score is that it represents the sum of phylogenetic branch length between species that contains a site. (Friedman R.C, 2009) This will be elaborated more later on.

Each colour code for the miRNAs represent their seed type, as already mentioned in the earlier table. What TargetScan or such similar tools do is, they calculate probabilities. There is always a range of probabilities for even something like miRNA target prediction. The true value lies in the range between higher and lower probabilities for the same set of colour markers.

As we can see that miR-655-3p is highly conserved across most species, i.e the sequence is the same throughout, till Opossum, while the other two are poorly conserved, conserved only till Chimp. This justifies the fact why miR-655-3p has a conserved branch length score as high as 2.667.

These miRNA sequences are then extracted via the miRbase link available also on the TargetScan result page. The sequences as provided by miRbase and verified by TargetScan are as follows:

Few things that have unraveled through this endeavour are that the above three micro RNAs (hsa-mir-655-3p, hsa-mir-186-5p and hsa-mir-329-3p), obtained by in-silico analysis can be designed and tested in wet lab to actually analyse their ability to post-transcriptionally regulate the Securin mRNA transcript and actually degrade it. Among them, hsa-miR-655-3p, as found to be highly conserved can also prove fruitful in mouse model testing as well. This can serve as a novel method of understanding the process of induction of carcinogenesis in mammalian cells due to Securin overexpression.

I express my sincere gratitude to my guide, Prof. Anupam Chatterjee, Department Of Biotechnology and Bioinformatics, North-Eastern Hill University Shillong, for giving me the opportunity to explore various dimensions of the topic, despite certain limitations we faced in conducting this fellowship online. I would also like to thank Prof. Dipankar Chaudhuri, Department Of Biotechnology, Heritage Institute Of Technology Kolkata, for his valuable technical inputs throughout the course of this fellowship.

Lastly, I'm grateful to the Indian Academy Of Sciences for offering me this fellowship. It has been a great learning experience for me, something that'll contribute immensely to my own knowledge and understanding.