Geochemistry of natural waters as tracers to weathering and reverse weathering

Silicate weathering of continental rocks over geologic timescale leads to the drawdown of atmospheric carbon dioxide. CO2 is an important greenhouse gas thst is also acidic in nature. Chemical weathering plays a modulating effect on the global climate by regulating CO2 levels. Exposed crustal rocks undergo chemical reactions involving consumption of carbon dioxide, its conversion to carbonic acid to dissolve minerals in the rocks, leading to dissolution of major cations from the solid phase to the fluid phase. These ions follow its unique geochemical path to reach the oceans. The residence time is different for different ions and varies with change in the reservoir. Higher the weathering, higher is the consumption of carbon dioxide from the atmosphere. Chemical weathering works as a negative feedback that moderates long-term climate change and is considered to be a prime driver of Cenozoic cooling. Sea water is the most widely available natural electrolyte solution and serves both to control and to record the effects of global terrestrial and oceanic geochemical process. An increase in chemical weathering in warmer climates would have increased the cation flux discharged into this ocean reservoir, leading to increased alkalinity and increased pH of the oceans. The sea is considered to be in steady state, so it acts as a buffer which helps in maintaining the steady state by the elemental recycling of oceanic elements. Carbon dioxide is introduced into the ocean system via hydrothermal vents and sea-air interface. Recent studies indicate the occurrence of reverse weathering, leading to rapid authigenic clay formation by utilizing the cations and the alkalinity from the ocean reservoir and discharge of CO2 into it.This report aims to quantify the weathering and reverse weathering profiles in river water and deltaic systems. In this project, we shall work on the cores collected and undertake pore-water sampling to understand the natural water geochemistry. 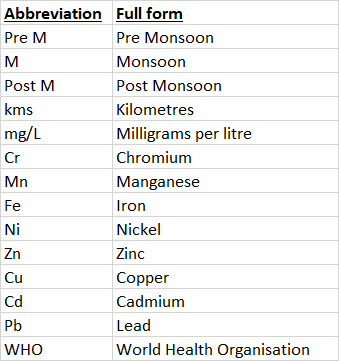 Formation of cation abundant authigenic silicate clays is thought to occur through the following reaction: 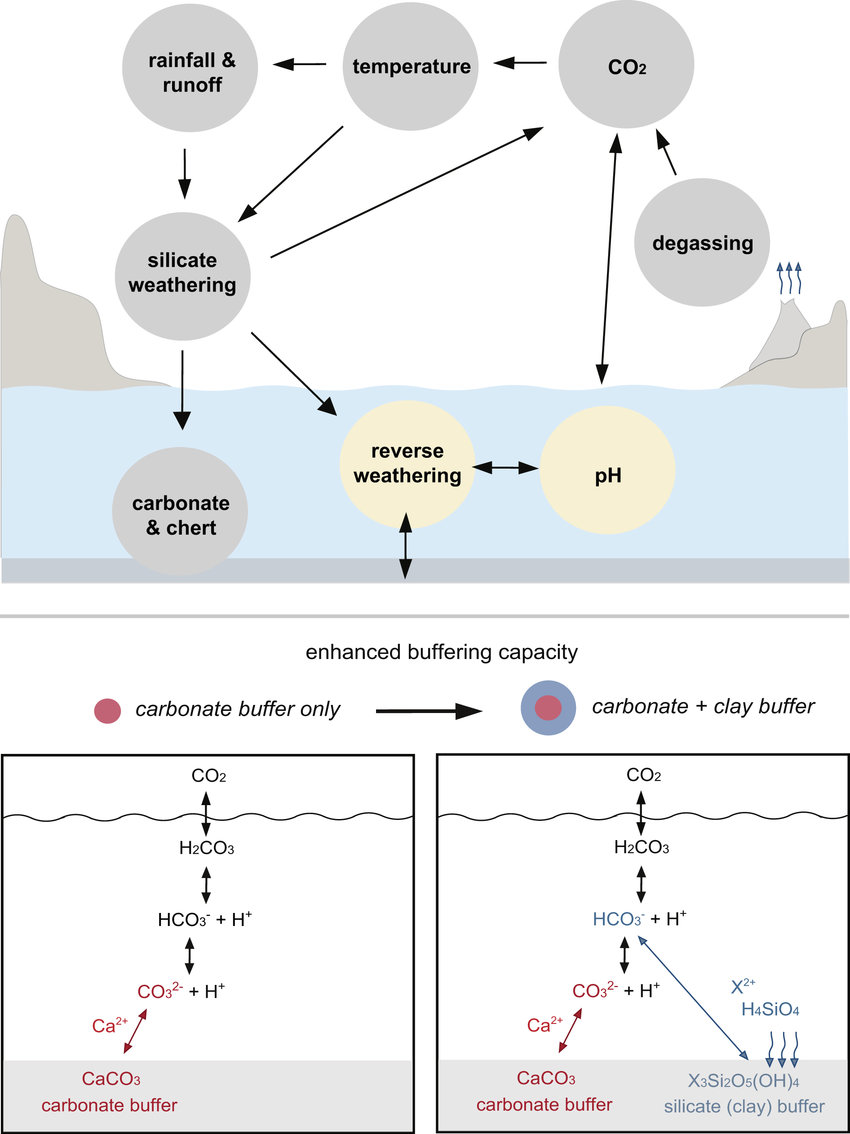 The major limitation of reverse weathering is the less availability of reactive silica. Rapid biomineralization rates ensure that >90% of today’s global Si export is sequestered as biogenic opal.

River Ganga is one of the largest and longest rivers in India and originates from Gangotri in the Himalayan Mountains. After flowing about 2,525km the river meets the Bay of Bengal near Kolkata.The important cities located at its banks areRishikesh, Haridwar, Kanpur, Allahabad, Varanasi,Patna and Kolkata.

Globally, aquatic ecosystems are highly polluted with heavy metals arising from anthropogenic and terrigenous sources. The river Ganges has been one of the major recipients of industrial effluent in India. 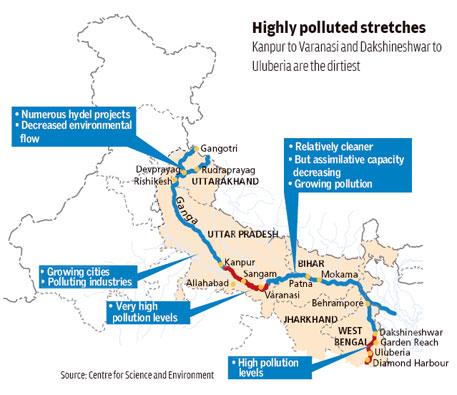 A literary review was done to try and quantify the heavy metal concentrations along the Lower stretches of Ganga downstream from Berhampore( named S1), Palta Station (S2), Dakhineswar(S3), Uluberia (S4), Babughat (S5), Diamond Harbour(S6), and Gangasagar(S7). To see the seasonal variations in the river water quality with respect to heavy metals contamination. 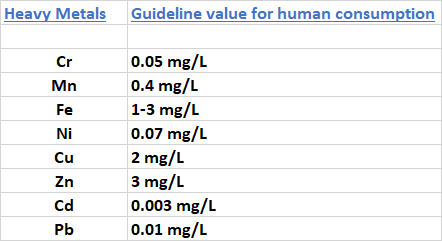 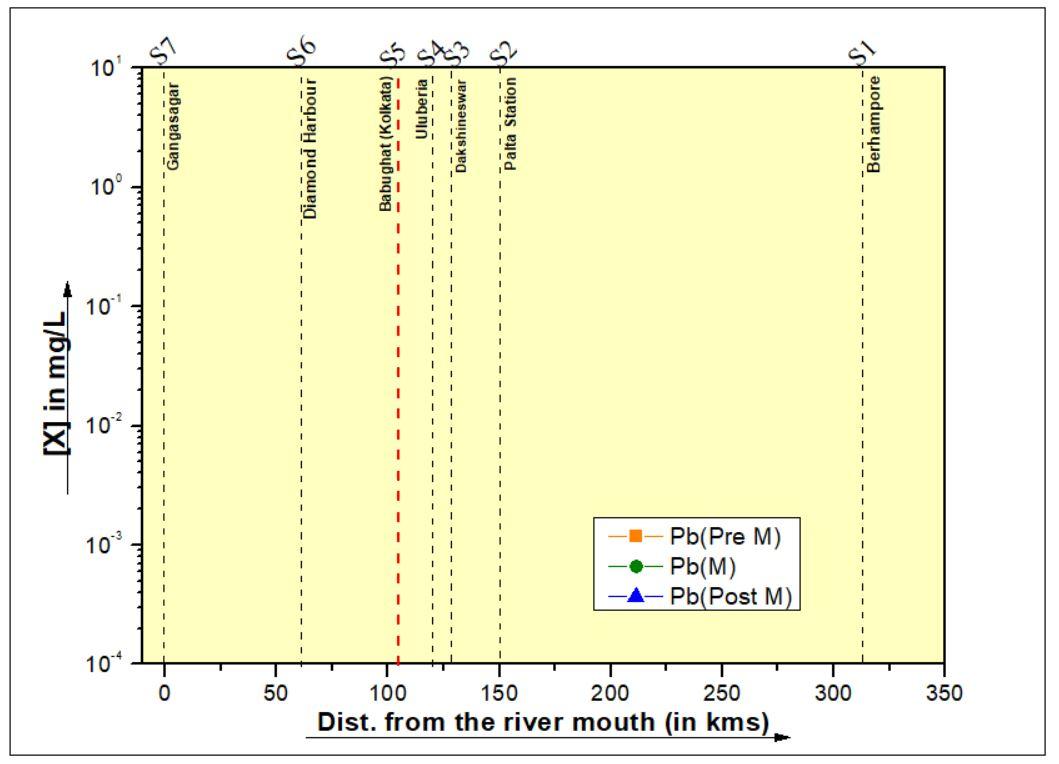 Note- In the plots, the red dashed line indicative of S5- Babughat(Kolkata) and the horizontal violet dash-dot line indicates the guideline value for human consumption. Distance from river mouth is in kilometres. 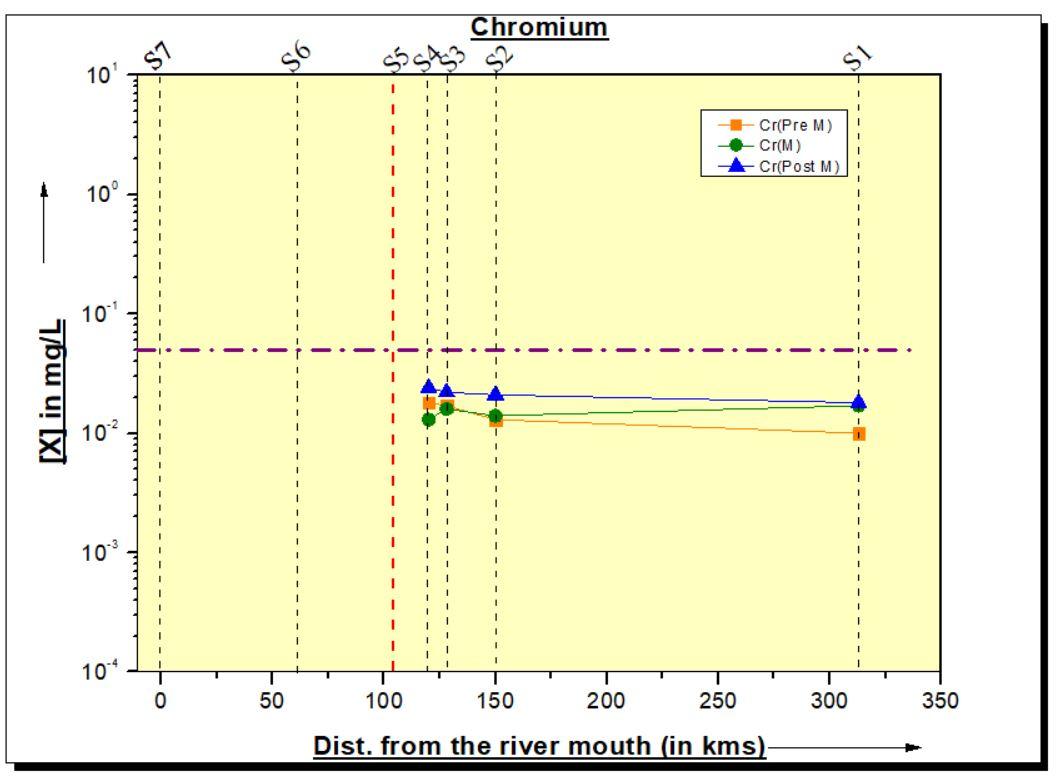 From Graph 1, Cr concentration is highest in post-monsoon, followed by monsoon and pre-monsoon. 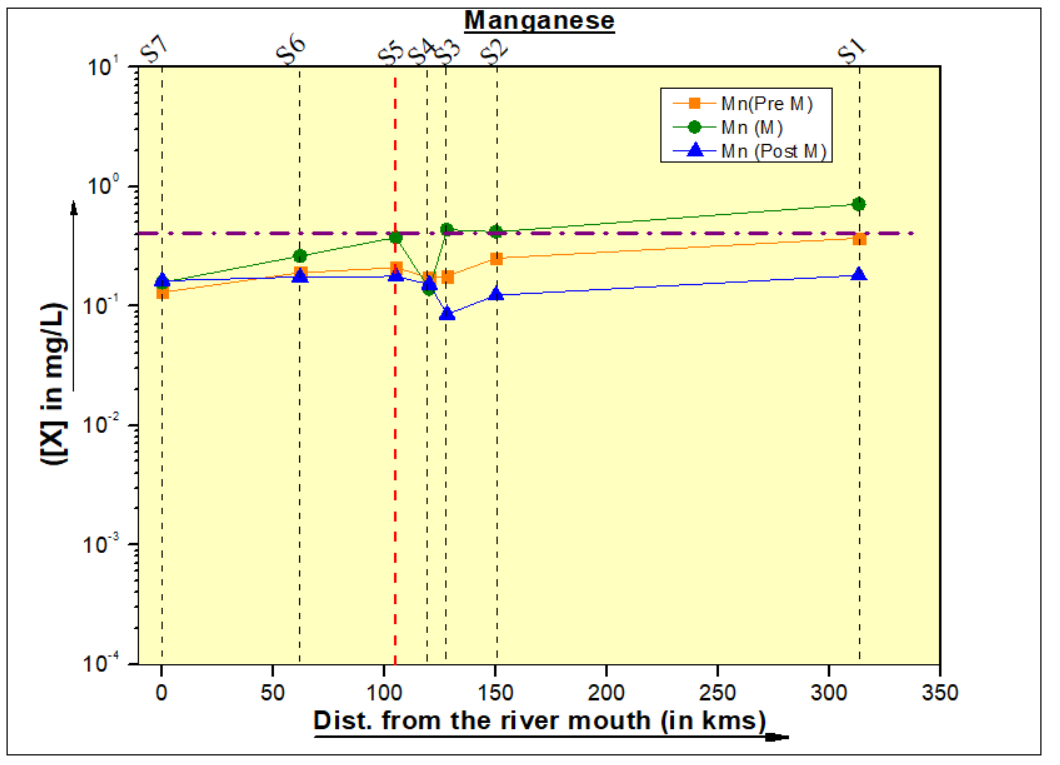 From Graph 2, we find near river mouth the concentration of Mn remains quasi-constant irrespective of seasonal change. Towards north of river mouth, the concentration is maximum in monsoon followed by pre-monsoon and then post-monsoon; and the positive gradient from (S3 to S1) remains almost parallel with the change in seasons, due to the no change in annual contamination amount from the plastic and iron and steel industries. Irrespective of the dilution factor in monsoons, the rate of Mn concentration is high mostly due to the contamination from fertilizers and pesticides used in agriculture. From Graph 3, the highest concentration near river mouth is in the monsoons followed by pre-monsoon and post-monsoon. It is mainly due to the comparitively redox-sensitive mobile phase of Fe2+in the solution phase. Thus with increase in riverine water flux, Fe2+is more near river mouth in the monsoons. There is a seawater influence till Diamond Harbour and thus the iron concentration decreases upstream towards kolkata. Near S5, all the year round the conc. remains almost the same. There is a sudden surge in conc. further north of S5 which is probably due to the presence of iron and steel industries in S4 and S3 locations. 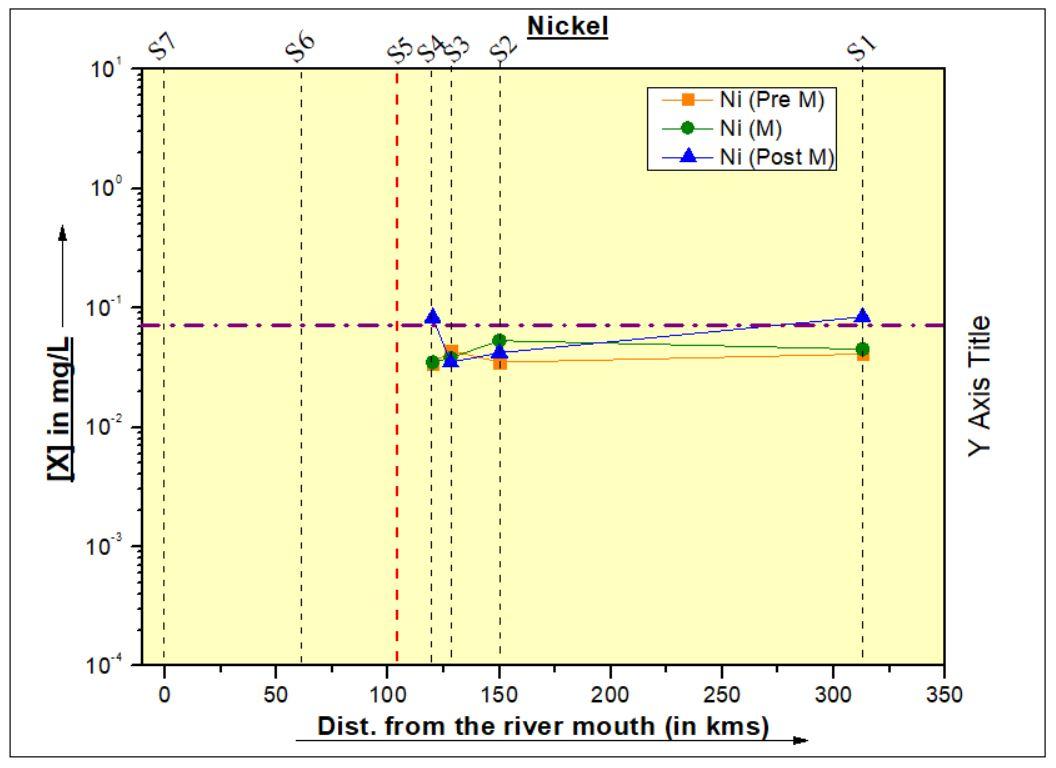 From Graph 4, post-monsoon concentration shows highest followed by monsoon and premonsoon. Near Dakshineswar, the concentration remains the same irrespective of seasonal changes. 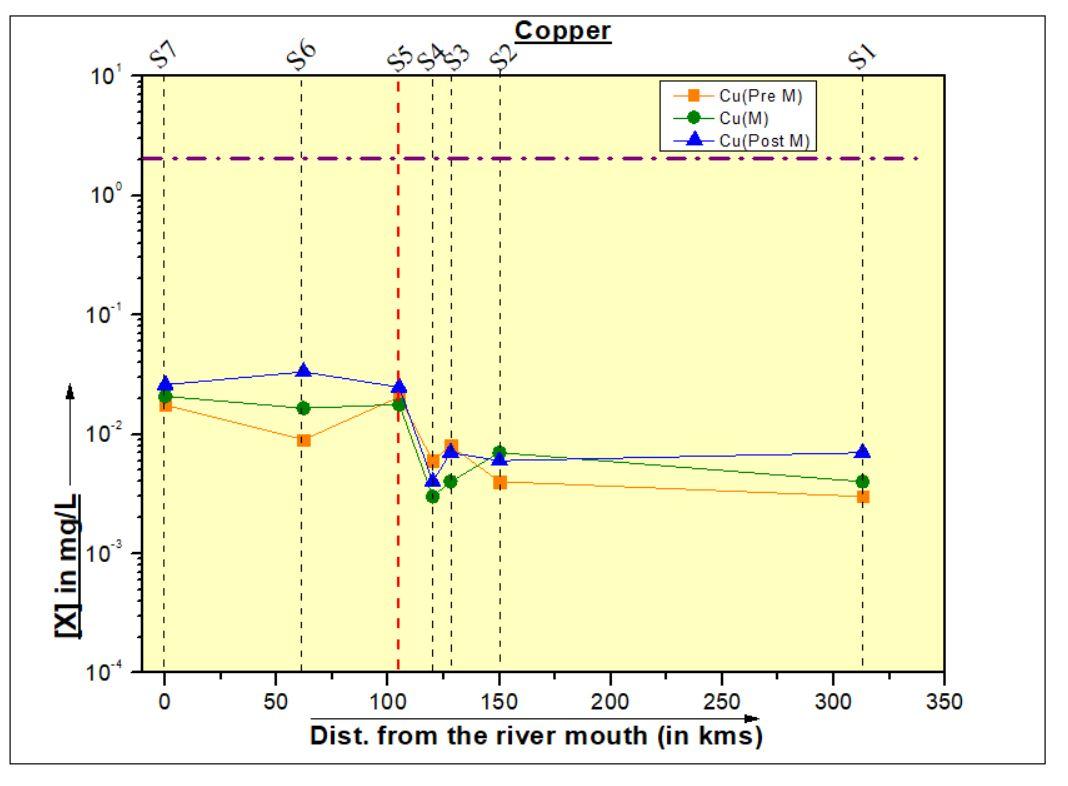 From Graph 5, concentration of Cu is maximum in Post-monsoon followed by monsoon and pre-monsoon. From Graph 6, we find there's a concentrational variation along river mouth([Post M]>[Pre M]>[M]) but the concentration remains almost constant at S1. 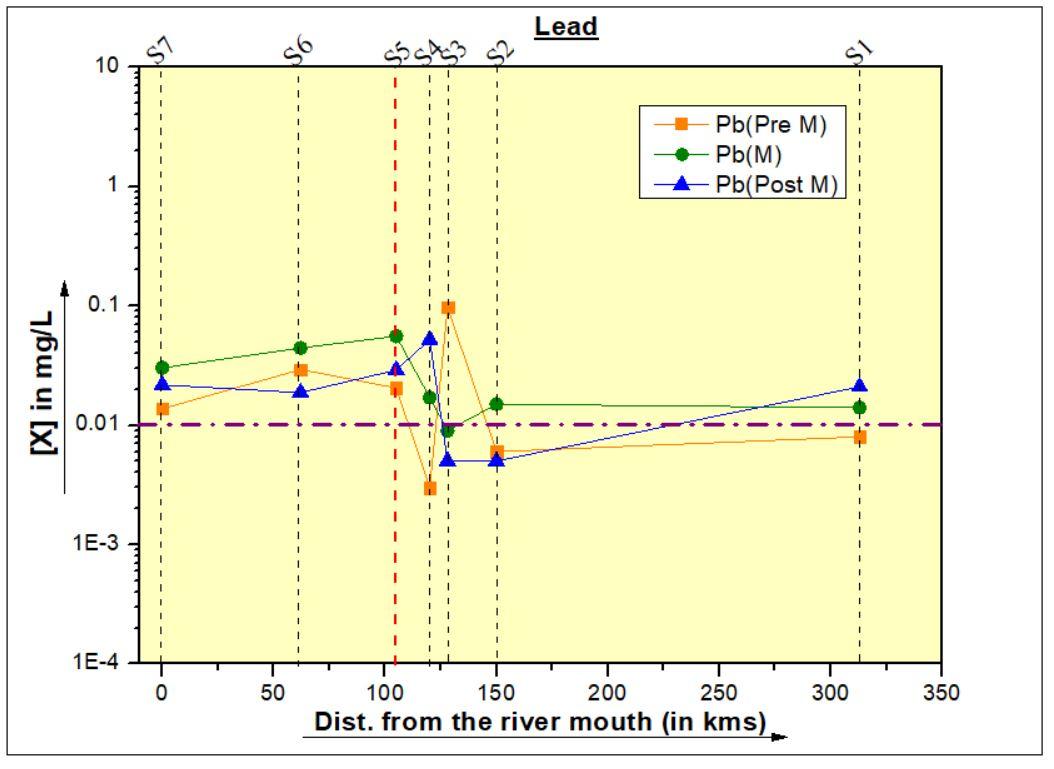 At the river mouth, irrespective of seasonal discharge amount, the concentration of the heavy metals remains invariant due to sea water influence. Elements from the fluid phase tend to flocculate in this brackish to salt water region. As we move northwards, i.e.,away from the river mouth, there is a distinct and characteristic variation in each elemental concentration with seasonal changes in precipitation pattern. Pre-Monsoon the concentration should have been highest similarly concentrations should have been lowest in monsoons due to dilution effect. But critical soil-water interaction, industrial emission, pollution all these factors contribute to an increase in concentration even during monsoons overprinting the natural signal.

Natural source of heavy metals in water is chemical weathering of silicate rocks and at times clays. Natural sink of these elements is the oceanic reservoir. The anthropogenic input of elements, change in redox state, seasonal variability, sea and river water interaction leading to change in salinity are factors which deplete or elevate the metal concentration from its natural concentration. Thus, all these factors thatperturbs the concentration must be taken in to consideration for correct assessment of the weathering and reverse weathering rates.

I would like to take this opportunity to express my heartfelt gratitude to the Indian Academy of Sciences for accepting my proposal for the Summer Research Fellowship Programme 2019.

I would also like to thank my guide, Dr. Sambuddha Misra,IISc,Bangalore for his constant guidance and encouragement throughout this fellowship.

I would not forget to thank my sir, Dr. Shiba Shankar Acharya, Presidency University,Kolkata without whose help and motivation I might not have been able to get and complete this fellowship.

I also thank my family and my friends who have always been my constant support system.

Finally, I apologise to all other unnamed who might have helped me during this project.