Globalization and extensive population explosion consequences in dramatic deterioration of global climate that ultimately affects the natural ecosystem. Drinking water contamination is a burning issue and indeed poses a challenge in almost all parts of the world. In its consequence the utilisation of naturally abundant and chemically moduled inexpensive adsorbents with an aim of purifying the drinking water that is contaminated with Arsenic, Fluoride and Iron is the urge of the present era. In the present study chemically activated carbon has been synthesized by using husk charcoal obtained from various bio sources that acts as one of the adsorbent. This is further mixed with aluminosilicate bearing clay mixtures to escalate the efficiency of adsorption. Although a surfeit of adsorbent materials have been reported in literature towards removal of arsenic and fluoride from water, however in the present century the application of nanosorbents is burgeoning towards environmental applications. In its relevance the incorporation of transition metal (iron) oxide based nano-materials are known for their target specific affinity towards Arsenic and fluoride removal. The nanoparticles (NP) have been prepared by co-precipitation method. Various combinations of these adsorbents at different ratios were studied for the removal of the targeted pollutants from the ground water resources. It was found that the wiseful ratio had a significant impact on the physical and mechanical properties of the adsorbents. NP holds maximum potential for adsorption as per the results obtained. Various ratios of adsorbent materials have been taken into consideration including unique weight % ratio of clay mixtures: ActivatedCarbon. This mixture was made hydrophobic by the addition of CTAB, a cationic surfactant. To know the effectiveness of adsorbents, various sophisticated analytical instrumentations like AAS, FE-SEM, FT-IR, AFM study before and after adsorption were carried out.

The major problem encountered by human population especially those who are solely depended on groundwater resources for drinking purposes is metal pollution.[1] Our focus is on the 3 main metals which are highly threatening for human life, Arsenic, fluoride and Iron and are responsible for creating imbalance in the ecosystem.[2]

Arsenic contamination of groundwater is a form of groundwater pollution which is primarily caused due to naturally occurring high concentrations of arsenic in deeper levels of groundwater.[3] A 2007 study found that over 137 million people in more than 70 countries are profusely affected by arsenic poisoning of drinking water. [4]

Several million people are exposed to fluoride (F-) via drinking water in the world. Current review emphasizes the elevated levels of fluoride concentrations in the groundwater and associated potential health risk globally.[5] The latest estimates suggest that around 200 million people, from among 25 nations all over the world are under the dreadful fate and clutches of fluorosis. To name a few India and China, the two most populous countries of the world, are the worst affected.

Contamination of ground water with Iron is causing concern all over the world. In India particularly in the North Eastern States and West Bengal are intensely affected. The presence of iron in water beyond the WHO limit, affects taste/ appearance and has adverse effects on domestic use, water supply structures, and promotes iron bacterial growth.

Utilization of agricultural residues and weeds as alternative materials for fossil fuel is of colossal importance and interest due to its environmental friendliness. The present study proposes production of husk charcoal obtained from various bio sources. The use of conventional adsorbents for arsenic and fluoride removal from groundwater could be expensive, ineffective and tedious. In its consequence, the use of alternative adsorbents is of great relevance, such as products of biological origin, or wastes and by-products from industrial and agricultural activities. These agricultural waste materials used as biosorbents have some advantages over the conventional adsorbents owing to their abundance, inexpensive, facile synthetic route and may act as complexing agents due to their physicochemical characteristics and particular structure. Particularly, lignocellulosic materials derived from agricultural wastes have been considered as efficient adsorbents due to their high cellulose, hemicellulose and lignin content and also because of their large melon scale generation, low cost and is indeed a potential material towards target specific removal of contaminants.

The water pollution due to indiscriminate utilization of heavy and toxic metal containing products is of great concern since they are highly soluble in water and cannot be distinguished from pure drinking water with naked eyes and hence millions of people consume unhealthy water in their day to day life. Hence, to find a solution to this problem is far reached and need to be focussed seriously by scientists. There is an urgent necessity to develop a method for the removal of these metals from water to provide a safe and healthy drinking water to millions of people. Proper utilisation of adsorbents including low cost, naturally abundant and chemically moduled adsorbents towards selective removal of target specific analytes is scanty in literature. Majority of the population are literally unaware of the existence of such metals in the groundwater far beyond the permissible limit. Research in this field has to be done to nip this problem at the budding stage and thereby save millions of people from the havoc.

Ø  Synthesis of activated charcoal from various naturally abundant husks followed by their chemical modification that would serve as next generation material towards effective removal of Arsenic, Iron and Fluoride like toxic contaminants from groundwater.

In this work, our target will be towards removal of the major toxic raw water contaminants Arsenic, Iron and Fluoride from ground water sources by gravity based adsorption technique that includes the following:

The main focus of the present work is to provide a safe, eco-friendly, efficient, non-pollutant, non-toxic adsorption system which would be a sustainable development based integrated solution wherein all the three major raw water contaminants can be remediated thus fulfilling the prima facie motto of CSIR “Waste to Wealth” and accomplishing the Swatch Bharat and Swatch Neer Mission.

Adsorption is a superior method over the others owing to the following reasons:-

Ø  Easy to install and maintain.

Ø  Efficient to remove certain organics as well as inorganic contaminants prevailing in the water.

Ø  Adsorbents are based on naturally abundant materials.

Various works have been carried out by scientists all over the world for removing heavy metals from ground water. While carrying out a literature survey, the most prominent ones based on adsorption was found to be:

(i) Adsorption of Mercury, Lead and Cadmium Ions on Modified Activated Carbons.[11]

A glimpse through these papers provide us with certain drawbacks such as usage of only a single naturally abundant adsorbent which may limit the efficiency, not using the optimum conditions for the impregnation of husk charcoal for its chemical activation[15], providing a heat treatment than necessary etc. Through the present work emphases is levied towards overcoming the aforesaid loopholes and thereby rectify all these and develop a better efficient adsorbent.

[2] Both the husks were properly washed separately 3 to 4 times with hot distilled water and dried under sunshine.

[3] The dried husks were treated with 0.2N dilute sulphuric acid for increasing the porosity.

[5] Take out the material and filter it several times with distilled water until pH of the filtrate is neutral.

[7] The so obtained charcoal is chemically activated by taking 50g of it and impregnating it with 200ml of 0.1M Zn(NO3)2 solution.

[8] It is then kept for magnetic stirring for 2 hours.

[9] The obtained solution is the filtered using normal filter paper in Buckner funnel.

[10] The residue obtained is of shining blackish colour with sticky nature which is then kept in muffle furnace at a temperature of 102˚C for one hour.

4.        After sometime, pour the prepared solution of Zinc nitrate hexahydrate.

5.        The acidic pH of the above mixed solution is decreased to a neutral pH of 6-7 by adding ammonium hydroxide (NH4OH) dropwise using a separating funnel.

6.        pH of the solution is checked using a pH paper in definite intervals of time.

7.        Now the solution is kept overnight to settle down and precipitate out.

8.        It was filtered out and kept in microwave oven at 120˚C for one hour. Black crystals of nanoparticles were obtained.

The weight ratio of the husks were optimized and because of larger surface area of Husk 1 charcoal than husk 2 charcoal and it’s more selectivity towards arsenic adsorption the former was greater in amount than the latter. Sulphuric acid treatment was used as an oxidant to increase the porosity of the activated carbon. The heating temperature of dried husks was optimised at 250˚C for 1 to 2 hours by trial and error. The residue of Zn-impregnated activated carbon was kept at 102˚C for one hour by hit and trial in the following way.[16] 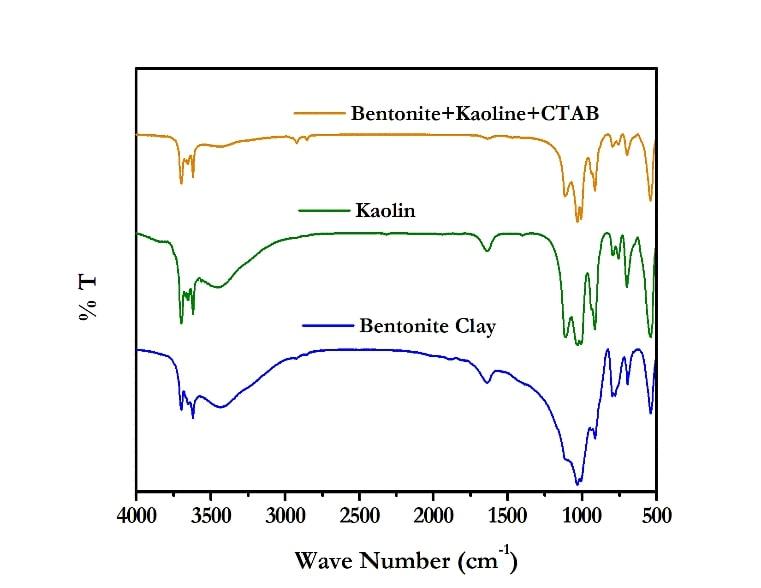 (ii) IR of Nanoparticle before and after adsorption 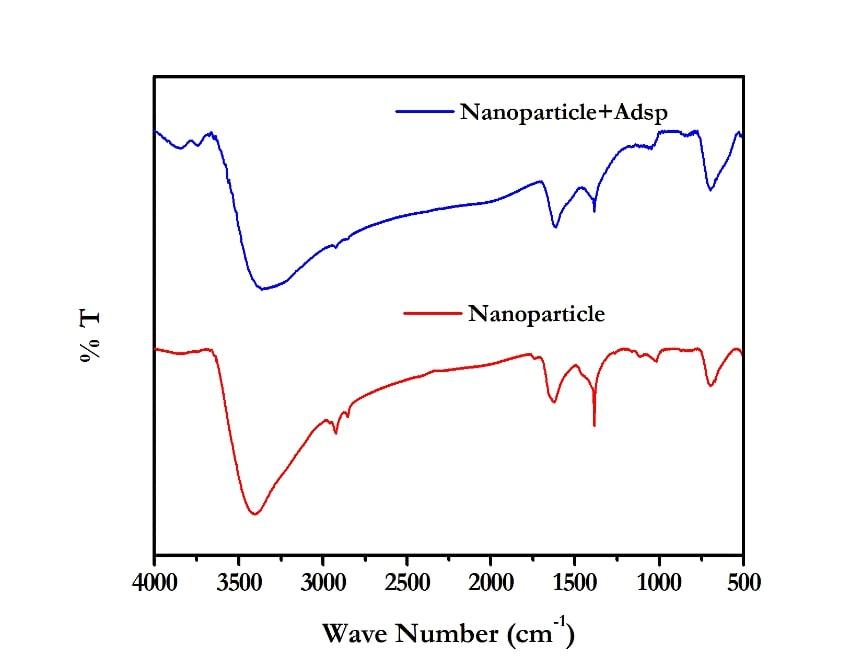 . FT-IR spectra of Nanoparticle before and after adsorption of As(III).

(iii) IR of FIA balls before and after adsorption 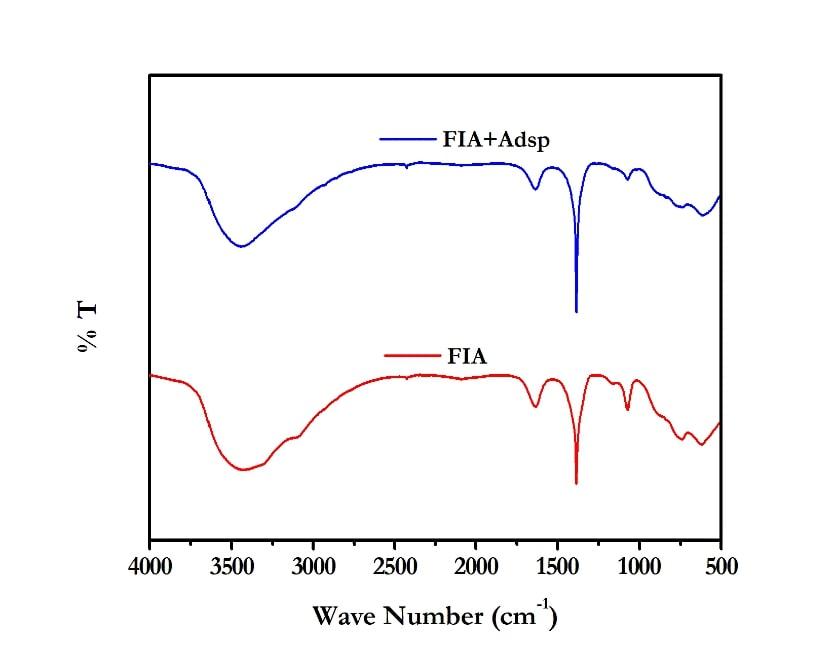 FT-IR spectra of FIA balls before and after adsorption of Fluoride.

(i)  FE-SEM of clay mixtures 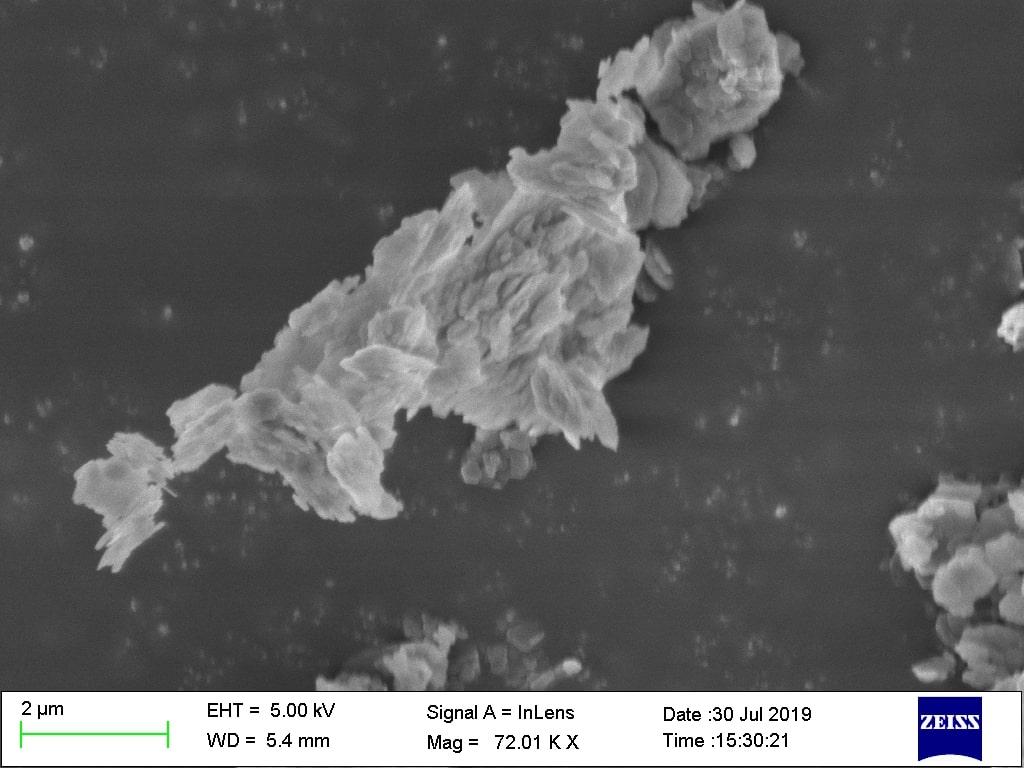 Using the atomic force microscopy (AFM), individual particles and groups of particles can be visualized and unlike other microscopy techniques, the AFM offers visualization in three dimensions. Here, the Fe nanoparticles have been characterized using the AFM by making samples on a glass slide of uniformly dispersed nanoparticle solution with ethanol. 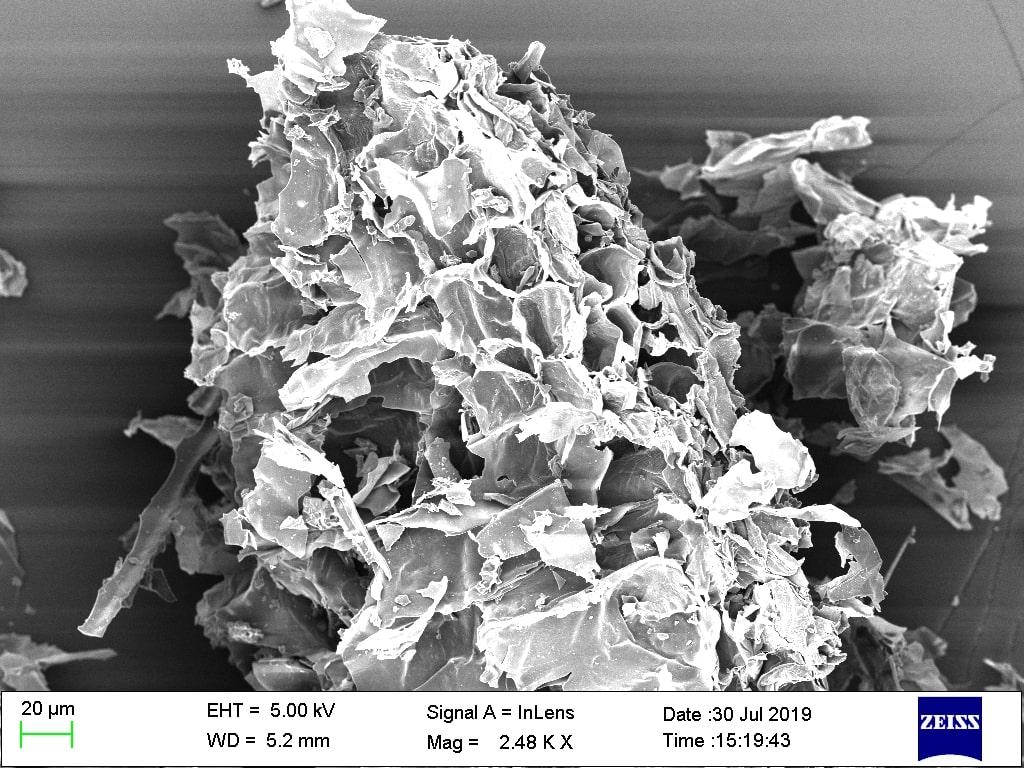 FE-SEM study of Zn-impregnated charcoal provides an idea of its surface morphology and characteristic pore size and shape. 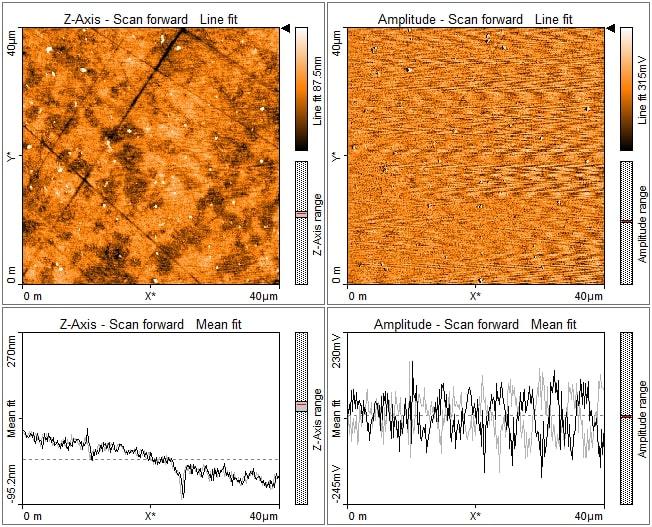 AFM Images of Nanoparticles provides an idea of its surface morphology and characteristic pore size and shape. 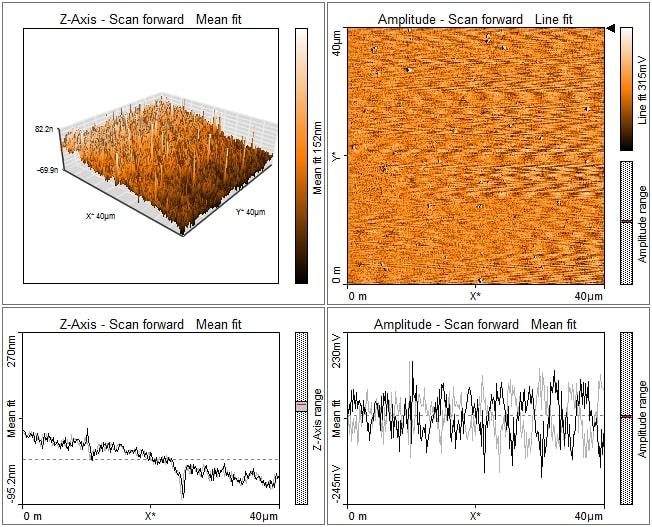 AFM Images of Nanoparticles (Topographical view) provides an idea of its surface morphology and characteristic pore size and shape.

Using the atomic force microscopy (AFM), individual particles and groups of particles can be visualized and unlike other microscopy techniques, the AFM offers visualization in three dimensions. Here, the Fe nanoparticles have been characterized using the AFM by making samples on a glass slide of uniformly dispersed nanoparticle solution with ethanol.

Images of the chemically moduled adsorbents 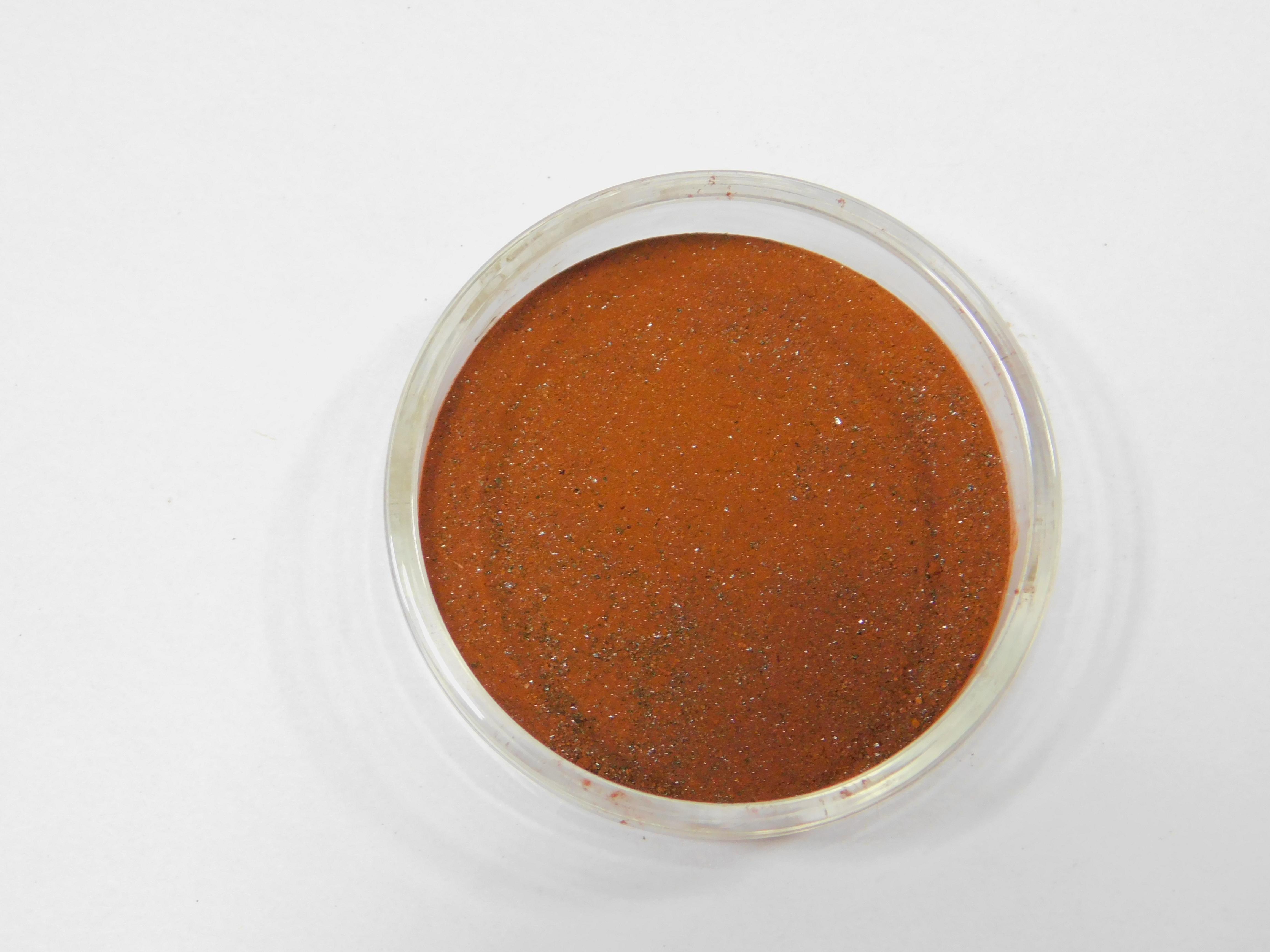 Photograph of freshly prepared Fe-nanoparticles from the iron salt Ferric nitrate. It is shiny and brown coloured in powdery form 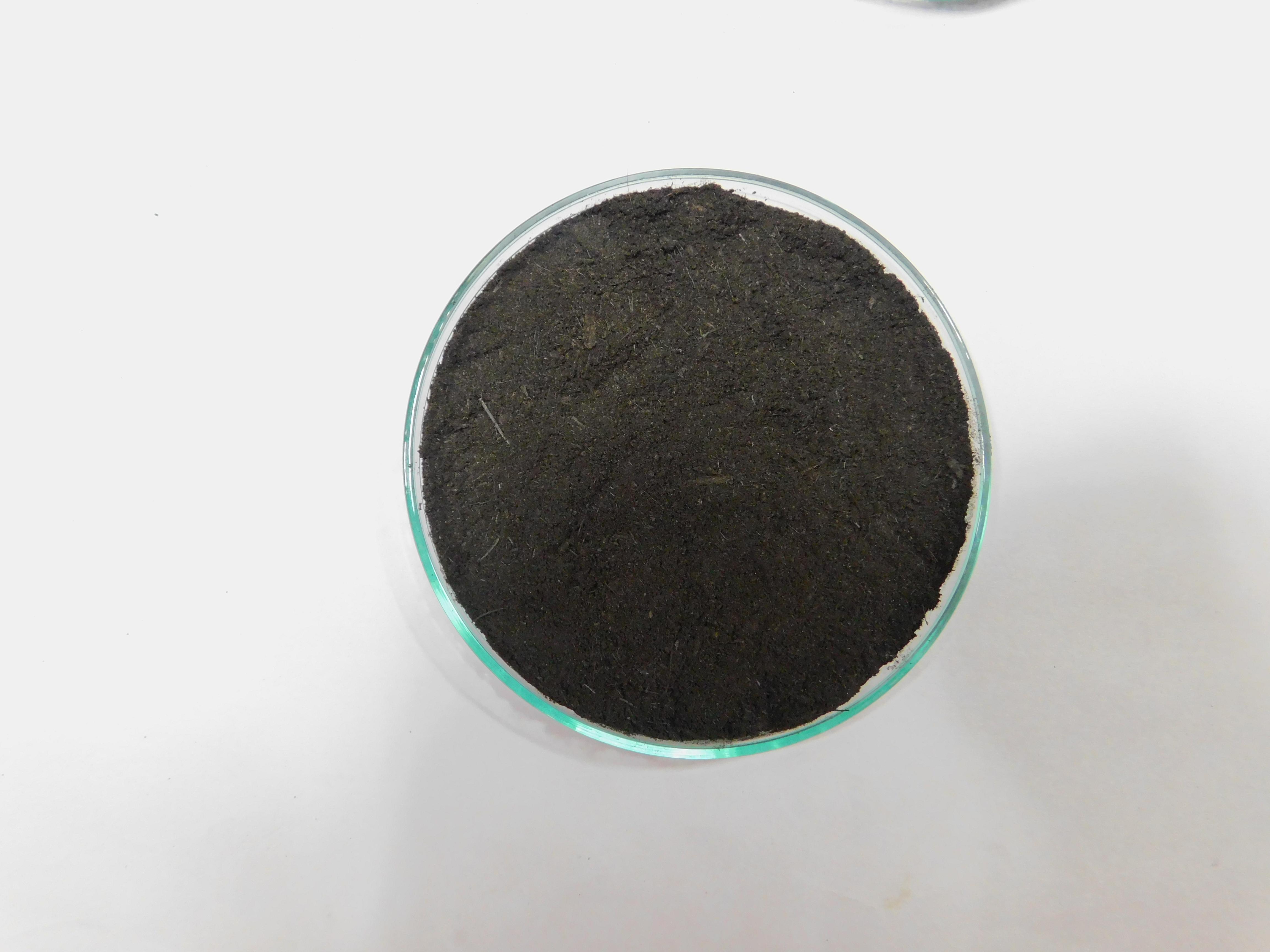 Photograph of Zn-impregnated activated charcoal which is obtained from husk1 and husk 2. It is shiny black in colour and sticky nature

Adsorbents for the removal of targeted heavy metals from water were successfully synthesized and subsequently characterised. Zinc impregnated activated carbon and Nanoparticles have been primarily emphasized in the present work. The synthesized nanosorbents were characterized by spectroscopic tools. These nanosorbents are highly efficient towards adsorption of fluoride and arsenic from contaminated ground water resources. A unique stoichiometric ratioof Zinc impregnated husk charcoal with varying clay mixtures are indeed a promising material towards removal of water contaminants. In the futuristic work target will be solely levied towards undergoing a comparative study of the asynthesized materials before and after adsorption of the targeted analytes along with exploration of the plausible mechanistic course of interaction of host material with the incoming guest analytes.

7. Debasis Ghosh, Removal of Fluoride, Iron and Arsenic from drinking water using a combination of electro-coagulation and micro-filtration. 2009.

First of all, I would like to express my courteous thanks to Indian Academy of Sciences for giving such a golden opportunity and platform to enhance my research skill.

My immense gratitude to CSIR-CMERI (Central Mechanical Engineering Research Institute), Durgapur for giving me a great opportunity to work as a Summer Research Fellow in this prestigious research institute,

I owe a debt of gratitude to my guide Dr..Priyabrata Banerjee, Senior scientist, Surface Engineering and Tribology Division, CSIR-CMERI for hisimmense guidance and encouragement during the project. I thank him for being an excellent mentor and guiding me in the right path.

I would like to express my sincere gratitude to Ms. Suparna Paul, Senior Research Fellow (DST INSPIRE), CSIR-CMERI for her constant support and assistance throughout the project.

Last but not the least; I am very much grateful to Dr Kallol. K. Ghosh, Director and Dr. Bhanushree Gupta, Assistant Professor, CBS-Centre for Basic Sciences, Raipur, Chhattisgarh for being my motivators and support system. I am also grateful to my family for their love and support.