Oscillators are the electronic circuits which produce periodic oscillating signals. Oscillators produce sinusoidal signals and clock pulses etc., which are used in signal generators to generate a periodic wave form. High frequency Sine wave oscillators are used to generate RF carriers. They are also used to generate local frequency in superhetrodyne radio receivers. Low frequency oscillators are used to generate audio tones and to excite LVDts. Oscillator can be used as a clock of the micro controller where clock is the most essential part of the micro controller, without an accurate clock, the functionality will be erratic. In almost all the applications where timing and synchronization is very essential, an oscillator finds its place. A Wien bridge oscillator is a type of electronic oscillator that generates sine waves. It can generate a large range of frequency signals. Oscillator is based on the bridge circuit originally developed by MaxWien in 1891 for the measurement of impedances. The bridge comprises of four resistors and two capacitors. Conventional Wien bridge oscillator consists of op-amp which has voltage feedback. This conventional oscillator can be improved by replacing voltage feedback amplifier(VFA's) with current feedback amplifier(CFA's). CFA's overcome the gain bandwidth trade-off exhibited by voltage feedback amplifiers(VFA's). Another advantage of CFA's is the virtual absence of slew rate limitation. These CFA's are used as filters , D/A converter buffers, audio amplifiers, however the features of these devices are not effectively used as signal generators. Here the analysis of Wien bridge oscillator using current feedback amplifier is carried out. The existing Wien bridge oscillator using CFA's have an actual feedback system. The circuit which is designed and analysed here is also a Wien bridge oscillator with CFA but it has a virtual feedback system which means the output is reflected on input but not directly. This virtual feedback circuit with CFA has the same characteristics as that of real feedback with CFA's.

This work is about the analysis of Wien bridge oscillator with the use of new class of amplifiers known as current feedback amplifier(CFA's) as an active device in the sinusoidal Wien bridge oscillator. They offer improved performance regarding frequency, accuracy, dynamic range, distortion level and also they seem to be more flexible for the inclusion of automatic gain control scheme. Analysis of oscillator using CFA with direct feedback system were carried out previously. Here we have focussed on direct feedback system and tried to replace it with a virtual feedback system as an experiment, just to know how the characteristics of Oscillator changes. Surprisingly we came out with the same result as that of direct feedback system using CFA. This type of analysis was not conducted here before. Characteristics of current feedback op-amp are primarily used to provide feed back indirectly from output to input which is not possible in voltage feedback op-amp. This CFA's signal frequency is independent of signal amplitude and the sensitivity of oscillation frequency to bandwidth variation is lower comparatively.

Operational amplifiers (op amps) are analog circuits that amplify voltage. They may be constructed so that their output voltage is based on the voltage difference across their differential inputs for voltage-feedback amplifiers, or VFAs and on the current flowing between those inputs for current-feedback amplifiers, or CFAs. There are many advantages of CFA's over VFA's, hence here we are intrested in CFAs instead of VFAs. Conceptually, a CFA consists simply of a unity-gain buffer with high input impedance between the non-inverting and inverting inputs. This is followed by an output stage whose voltage is equal to the product of current through the buffer, and the transfer impedance, Z . Generally, CFAs are implemented as a high-Impedance unity-gain buffer between the non-inverting and inverting inputs followed by a transimpedance output stage. Any system is expected to give stable output. For any ideal system output must not change with change in any of the factor which drives the component in the system. Here also CFAs exhibits stable bandwidth gain compared to VFAs that is product of bamdwidth gain doesn't change drastically with change in frequency. Ideally the bandwidth gain of CFAs is independent of frequency. Op amp with voltage feedback has another draw back, regarding slew rate, the amount of current available to charge and discharge the stabilizing capacitance. CFAs are inherently capable of much faster slew rates than VFAs. Hence the oscillator with CFAs that too especially with indirect feedback system proves to be stable over VFAs.

The oscillator must give stable output (oscillations) for all frequencies which cannot be achieved in voltage feedback op-amp. Bandwidth gain product must be constant for all frequencies. These are the major expectations from oscillator. This is achieved using CFAs in Wien bridge oscillator with direct and indirect feedback system. Large amplitudes are somewhat difficult to achieve in VFAs because of presence of slew rate, so this is also a major drawback in the oscillator system. We can overcome these draw backs by using CFAs with or without feedback.

A Wien bridge is a type of oscillator that can generate sine wave. It generates sine wave with large range of frequencies. The oscillator is based on a bridge circuit. The bridge comprises of four resistors and two capacitors. The oscillator can also be viewed as a positive gain amplifier. Automatic gain control, intentional non-linearity and incidental non-linearity will limit the output amplitude in various implementations of the oscillator. Assuming that the amplifier is an ideal element (without phase error) ,

characteristic equation is given by

Design equations are given by 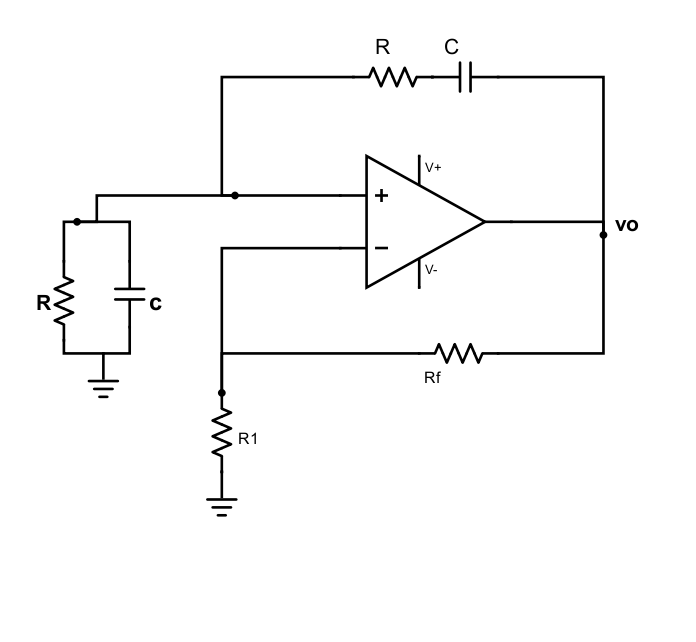 These are the conditions for charecteristic equation of ideal VFA.

In practical VFA the open loop gain will not be equal to K.

where K denotes dc gain and T denotes time constant of op-amp that is inverse of its gate bandwidth product .

these equations shows that signal amplitude disturbs the signalfrequency and vice versa. The degree of coupling is proportional to product then at medium-high frequencies the inaccuracy in the frequency and amplitude determination can be intolerable. Another drawback is associated with the moderated SR inherent in VFA configuration In fact,where operating at high frequencies or large amplitudes, the SR produces a strong distortion, and consequently a dominating amplitude dependence on the operation frequency.

Hence to overcome this limitations we can replace CFA in place of VFA. This is also experimented before and the result is as follows 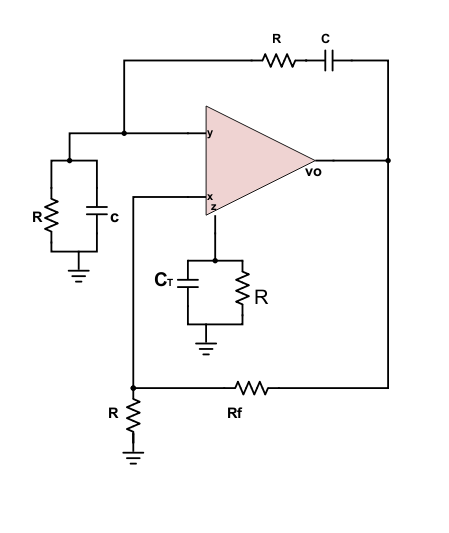 Now let us analyse the circuit,

​ this is from the condition of CFA

​ by appling the KVL

The closed loop gain is given by

​By Barkhausen criterion we know that Aβ=1 for the oscillator to produce sustained oscillations. let z1 be impedence of capacitor and resistor in series and z2 be impedence of resisitor and capacitor in parallel.

beta is the ratio between z2 and summation of z1 and z2.

Now by Aβ=1 we get the condition of oscillation as

These equations present an effective uncoupling that means the amplitude does not affect the frequency value. This provides important advantage of CFA based oscillator over VFA counterpart.

We always have a tendency of providing negative feedback to op-amp to stabilize the output and avoid distortio. But CFA has a terminal which is internally connected to output that has the effect on output. So here we need not to give an extenal feedback to attain stable oscillation. Hence we can use the internal structure of CFA to avoid negative feedback and analyse the conditions these are obtaied without actual feedback.

The major thing here that we are analysing is the responce of Wien bridge oscillator using CFA without actual feedback.

let us see the circuit, which is very similar to other Wien bridge oscillator circuit. 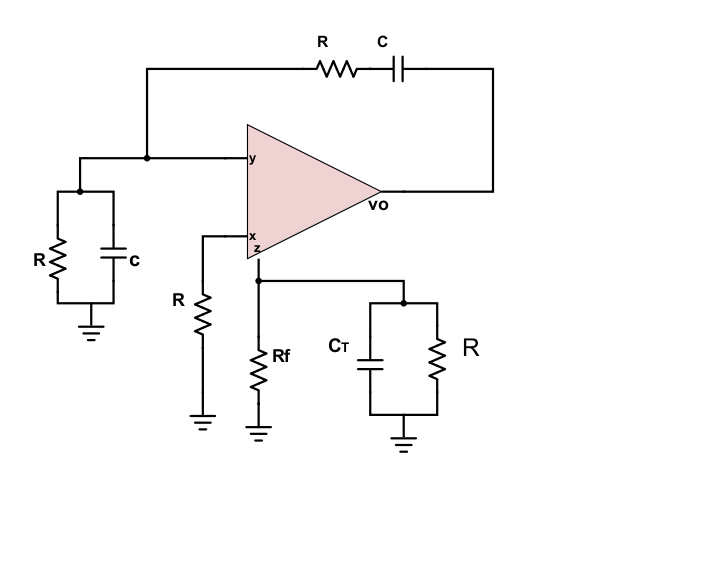 the transfer function of the circuit is

as K(s) is same as that of oscillator having feedback, The design conditions and considerations can be obtained by analysing the circuit .

By Barkhausen criterion we know that Aβ=1 for the oscillator to produce sustained oscillations. Let z1 be impedence of capacitor and resistor in series and z2 be impedence of resisitor and capacitor in parallel.

Beta is ratio between z2 and summation of z1 and z2.

Hence all the characteristics of this oscillator is same as that of the one exhibited by the previous system. The only difference we noticed is that the open loop gain is different for both circuits but the charecteristics exhibited by them are same. Hence this circuit can be used instead of feedback circuit.

To verify and analyse the effect of feedback on the oscillator and the effect without feedback on the oscillator's performance, stability and frequency response. For this particular case, the results are same for both the circuits and charecteristics exhibited are also same. Hence using CFAs instead of VFAs, we can design oscillator which is independent of gain variation. It plays major role in the situations where there is requirement of accurate gain and in cases where their is high order of frequency variation.

I sincerely thank The Indian Academy of Science, for providing me this great opportunity and I am very much thankful to the Netaji Subhas University of Technology, New Delhi for permitting me to use the fascilities like library, laboratory etc.

I would like to thank Dr Rudraswamy, Associate Professor, E&C Department, JSS Science and Technology University, Mysuru, who guided and encouraged me throughout, with his kind advice which helped me to get a wonderful experience. I express my gratitude towards my College and the Department. Without this platform I would not have participated in this program.

The special thanks goes to respected sir, S.Raghavendra, Associate Professor, EEE Department, JSS Science and Technology University, Mysuru and Smt. Kavya.M.C, Bengaluru for their timely suggestions and support which made my work easier. My heart felt thanks to my parents and to all my friends for their support in every stage of this work. Further more, most importantly I thank my Guide Dr.Raj Senani, Ex-Director, NSIT, Professor, Dept. ECE, NSUT, New Delhi, who made me learn the subject in easy way and taught me the way in which researches are to be carried out. He encouraged me to study new class of amplifiers(CFAs) which I would have never studied in my curriculum. 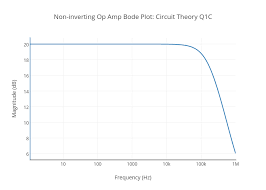 Bode Plots Enhance Feedback Analysis of Operational Amplifiers. Engineers routinely use Bode plots(1) to determine the bandwidth and frequency stability of voltage-gain op amp circuits. A Bode plot provides a visual representation of an op amp’s transfer response and its potential stability. Moreover, such plots define the circuit’s pole and zero locations at the intercepts of the response-curve extensions.