Dynamically Contrast Enhanced- Magnetic Resonance Imaging (DCE-MRI) is a relatively new modality that helps in both pre-clinical tumor modelling as well as clinical oncology. It requires acquisition of MR images before and during the administration of contrast agent (CA) or tracer. Further quantitative analysis of the acquired data provides information for diagnosis and monitoring response to medication. In DCE-MR images we need high spatial and temporal resolution. However, a tradeoff exists between the two. In order to obtain a large spatial coverage at high temporal resolution, undersampling technique is a feasible option. This brings out the need for a good reconstruction technique to make up the loss of data in the k-space. AIF and TK parameters can be jointly estimated from the undersampled k-space data directly without reconstructing the image of the tissue. This work aims at the comparison of Lp-norm regularisation schemes (p≤1) and L2-norm regularisation scheme to enforce model consistency and compare the accuracy and the reconstruction time of the two methods with 20x, 40x, 60x, 100x and 120x undersampled data.

A tumor, however benign it might be, cannot depend on diffusion metabolics for its proliferation. Thus, it starts developing its own vasculature which is known as angiogenesis. These new vessels, unlike the vasculature of normal healthy tissues, are leaky, missing epithelial cells and have blind ends. DCE-MRI exploits these differences to characterise the neo-vasculature, indirectly the tumor, as they appear as a bright spot due to leakage of the CA. 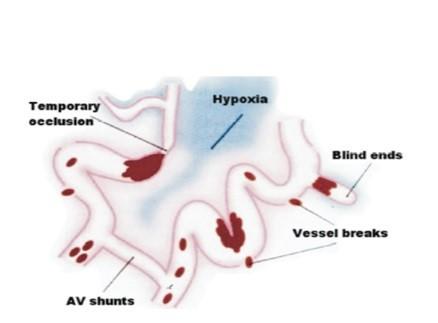 The conventional Nyquist sampling is unable to simultaneously provide the adequate temporal resolution and spatial coverage. DCE-MR images acquired at Nyquist rate can provide around 5-10 slices in the time span of flow of CA. To achieve the required temporal resolution at Nyquist rate, spatial resolution can be coarsened, but this results in a compromise with the quality of the image and also hinders the clinical evaluation of the image. Thus techniques involving undersampling and reconstruction have been developed to simultaneously obtain the required spatial coverage and temporal resolution. A good reconstruction model uses the prior information provided by standard modules on the tracer kinetics in capillaries while complying to the model consistency constraints and data fidelity. Early work on reconstruction was based on reconstructing the MR image from the under-sampled k,t-space and then applying TK modelling software to obtain the high resolution TK maps based on the reconstructed images. However, newer studies have been focusing on directly using the TK models to reconstruct the undersampled k,t-space data. These studies have shown to allow higher undersampling rates.

Studies have been using L2-norm regularisation to enforce model consistency. Recent studies have also suggested the possible use of Lp-norm (p≤1) regularisation methods. This review draws an efficient comparison between the two methods of regularisation and also tries to compare the existing backward model methods i.e. Patlak model and eTofts model.

DCE-MRI is the serial acquisition of T1 weighted images, before and after the CA is intravenously administered, in the ROI. CAs are usually paramagnetic material which decrease T1 time. The addition of CA makes the tumors in the ROI to appear brighter than the surrounding healthy tissue. MR signal intensity of any tissue is directly dependant on the local concentration of CA. By this relation, due to angiogenesis, the concentration of CA is much higher in a malignant tumor than in a healthy tissue. Upon quantitatively assessing the signal intensity in the time span from the administration of CA to its ejection, an insight into parameters related to blood flow, vessel permeability, tissue volume fractions etc., can be obtained.

To support the DCE-MRI data quantitative analysis, compartment models are used. Human body can be represented as one or more 'compartments' in which the CA dynamically flows. A compartment is a bound space that a CA can occupy and whose volume remains constant on the time scale of the experiment. In each compartment, it is assumed that, the CA is uniformly distributed throughout, without any time delay.

The simplest as seen in fig 1 from ​Thomas E. Yankeelov, 2007 is the single compartment method wherein it is assumed that the entire human body is one single compartment and the drug under consideration reaches an equilibrium throughout the body. This assumption is seldom held good as CAs are typically distributed with different rates in different tissues. 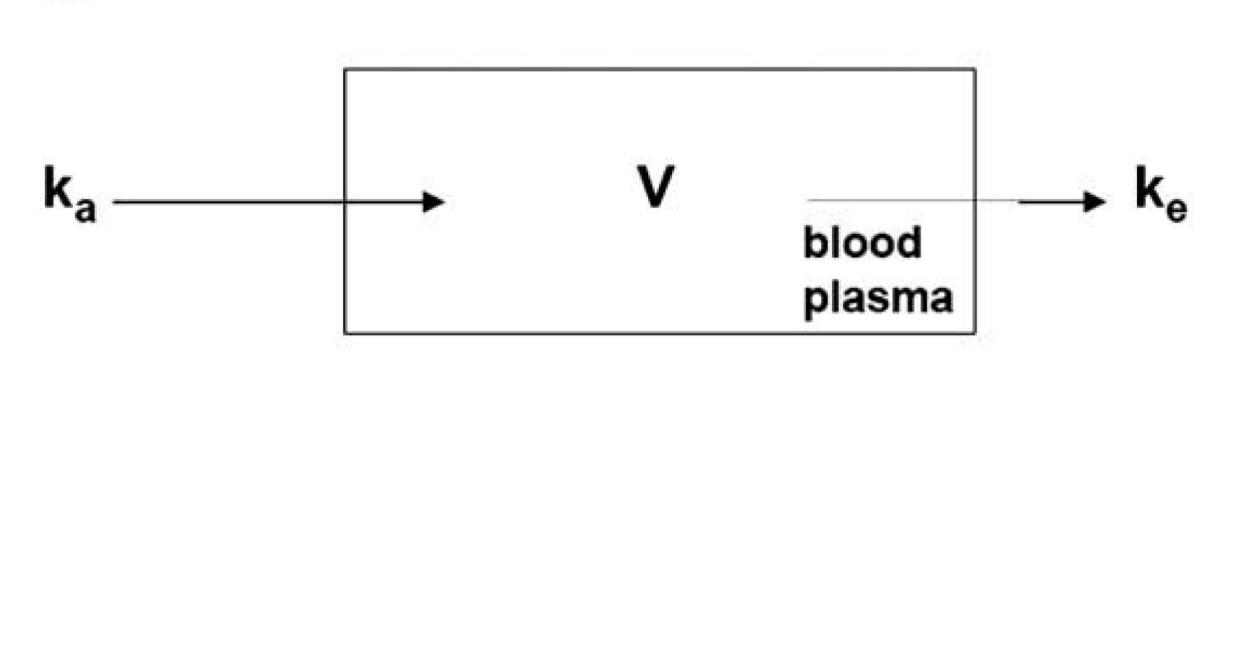 The simplest pharmacokinetic model is the single compartment model depicted above. A drug enters the compartment, V, with a specific rate constant ka, and is eliminated with a rate constant ke. Source:  Thomas E. Yankeelov, 2007 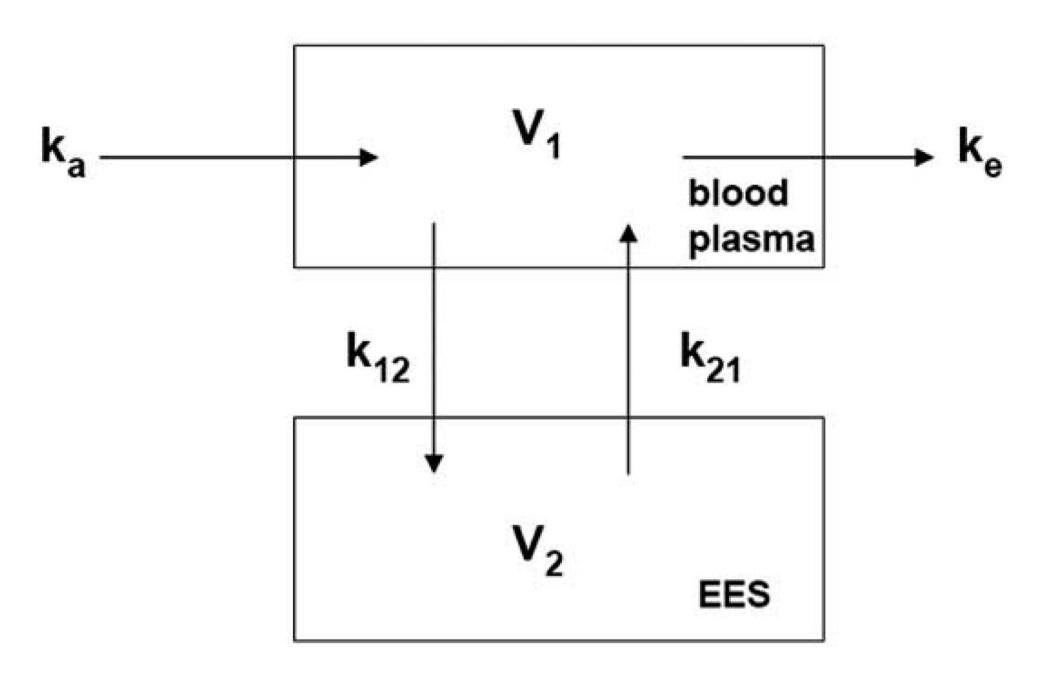 A more realistic approach is described by the two-compartment model which considers the extracellular intravascular space (blood plasma) to be the central compartment (V1), and the extravascular-extracellular space (EES) to be the peripheral compartment (V2). In this model, the CA is introduced into the vasculature and transported into the EES in a reversible process characterized by a distribution rate constant (k12) and a redistribution rate constant (k21). Source:  Thomas E. Yankeelov, 2007

Obtaining the Arterial Input Function (AIF) is by far the most technically demanding process in the acquisition of DCE-MRI. The AIF is the estimate of the concentration of CA in the blood plasma as a function of time, Cp(t). There are three main types of obtaining the AIF for data analysis.

The first method involves introducing an arterial catheter into the subject and measuring the concentration of CA during the imaging process. This method is highly accurate but at the same time it is invasive and has very poor temporal resolution.

Patient specific AIF can be obtained from the DCE-MRI data set itself. The signal intensity changes, due to the passing CA, in blood plasma and the surrounding tissues is simultaneously measured and later converted to intravascular concentration levels of CA using methods discussed later. The advantage of this method is that AIF is obtained at an individual basis while being completely non-invasive.

The third method, population average AIF, assumes that the AIF is similar for similar subjects. The AIF is measured for a small cohort of subjects and the same is assumed to be the valid AIF for the later subjects also. The merit of this method is its simplicity in both acquisition and analysis. The major drawback is that the changes introduced by the pathology under study are ignored.

The Patlak model is a linear model which follows the two compartment theory.

where Ct is the total CA concentration, Vp is the fractional plasma volume per tissue volume, Cp is the AIF and Ktrans is the forward transfer model. Since this is a linear model, concentration can be retrieved by taking the pseudo inverse.

The extended Tofts model assumes a term Kep which accounts for the backward flow of fluids into capillaries.

Since, eTofts model is non-linear in nature, a simple pseudo-inverse technique is not sufficient to obtain concentration levels back. An iterative algorithm can be used to solve this model fitting:

As the name suggests, Forward model is essentially the reverse operation of Backward model, i.e., the concentration maps are derived from the TK parametric maps.

The first term, L2 norm, represents data consistency, i.e., C should be consistent with the measured data y by signal equation (ψ), undersampling mask (U), fourier transform (F) and sensitivity encoding (E). S0 is the first time frame image which is fully sampled. S0 is usually obtained before administration of the CA. The second term, LP norm (​Pant et. al., 2014​) represents the model consistency constraint, where, C must be consistent with the modelling TK parameter maps i.e. Patlak or eTofts in this scenario.

This review is on joint estimation of AIF and TK parameters. AIF can be incorporated in equation (5),

we solve each variable alternatively as shown in (8), (nth iteration):

equation (8) is backward TK modelling, which also estimates patient specific AIF. For the estimation of pat-AIF, the arterial ROI must be identified.

The data used in this project is the In-vivo dataset, which has been made available by Guo et. al, 2016. This consists of nine fully sampled brain tumor DCE- MR images of a male patient of age 65 years diagnosed with glioblastoma. The parameters of this data set are as follows: field of view = 22 x 22x 4.2 cm3, spatial resolution = 0.9 x 1.3 x 7.0 mm3, temporal resolution = 5s, 50 time frames, eight receiver coils, flip angle = 15°, echo time = 1.3ms, repetition time = 6 ms, DEPOSIT1 has been performed before DCE-MRI, with flip angle of 2°, 5°, and 10° to estimate precontrast T1 and M0 maps. The contrast agent that has been used is gadobenate dimeglumine.

The data was retrospectively undersampled using randomised Golden angle Ratio at R= 20x, 40x, 80x, 100x and 120x. Gaussian noise was added to the image. For patient specific AIF, the ROI was detected and AIF was calculated by applying the forward model to the fully sampled image S0. A modified version of Conjugate gradient method proposed by ​Pant et. al., 2014​​ was used to to optimize the function.

Normalised RMSE is calculated as 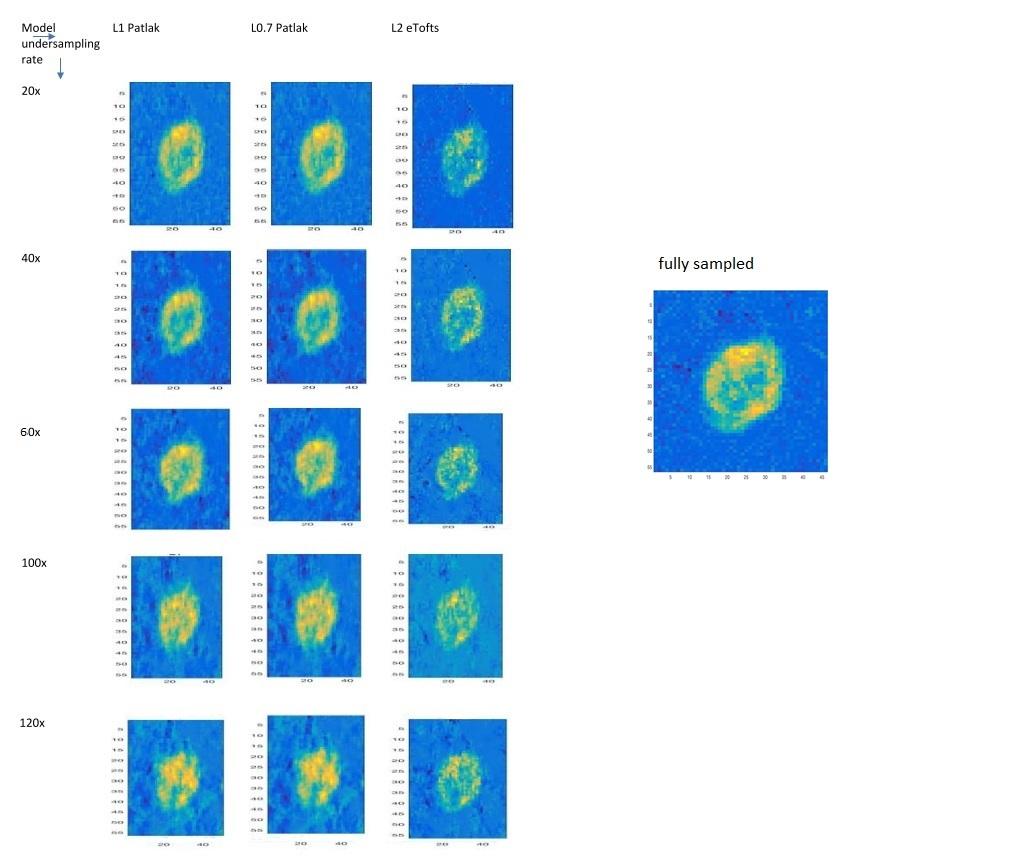 Fig 4 shows the Ktrans maps of the ROI for L1 and L0.7 norms using Patlak model and L2 using eTofts. 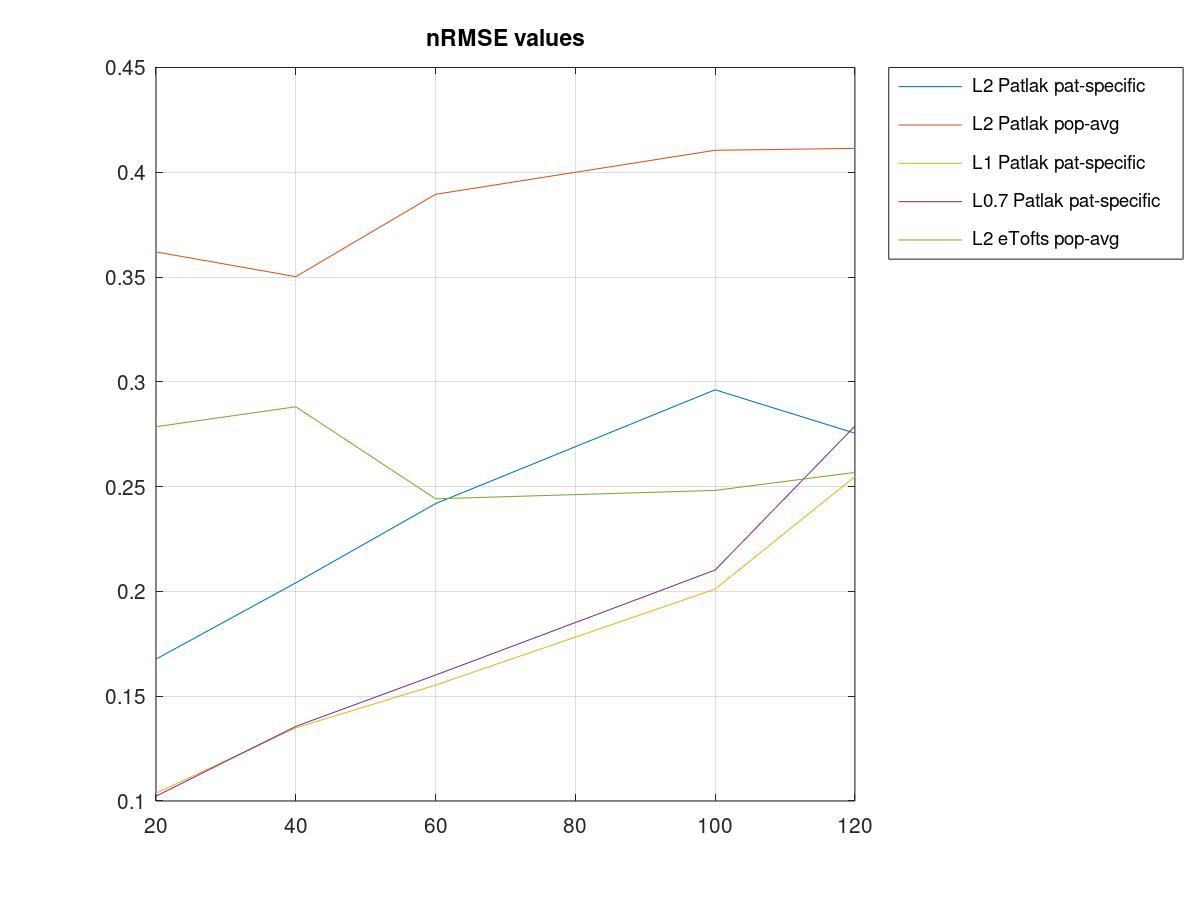 Fig 5 and table 1 show the RMSE values for the undersampling values 20x, 40x, 60x, 100x and 120x which were performed for Patlak and eTofts model using L2-norm, L1-norm and L0.7-norm regularisation on model consistecy constraint. As seen on the graph, L0.7- norm regularisation and L1-norm pat-specific have performed fairly well even at 120x undersampling when compared to the other methods.

eTofts has maintained a steady average RMSE of 0.26 throughout all the undersampling rates. Whereas, L2-norm regularisation of Patlak model using pop-AIF has performed poorly having an average of 0.38 RMSE worsening with progressing undersampling rates. L1 and L0.7 norm regularisations have performed exceptionally well with negligible error rates.

Fig 6 depicts the graph of AIF values for the 50 slices of images in the data for L0.7, L1 and L2 regularisations at R=60x undersampling. As the value of p in Lp-norm reduces, there is a significant rise in accuracy in the estimation of the AIF peak. Conversely, as p value increases, the average estimation has improved of the AIF after the 15th slice. Hence, it can be said that a trade-off exists between the two in terms of estimation of AIF. 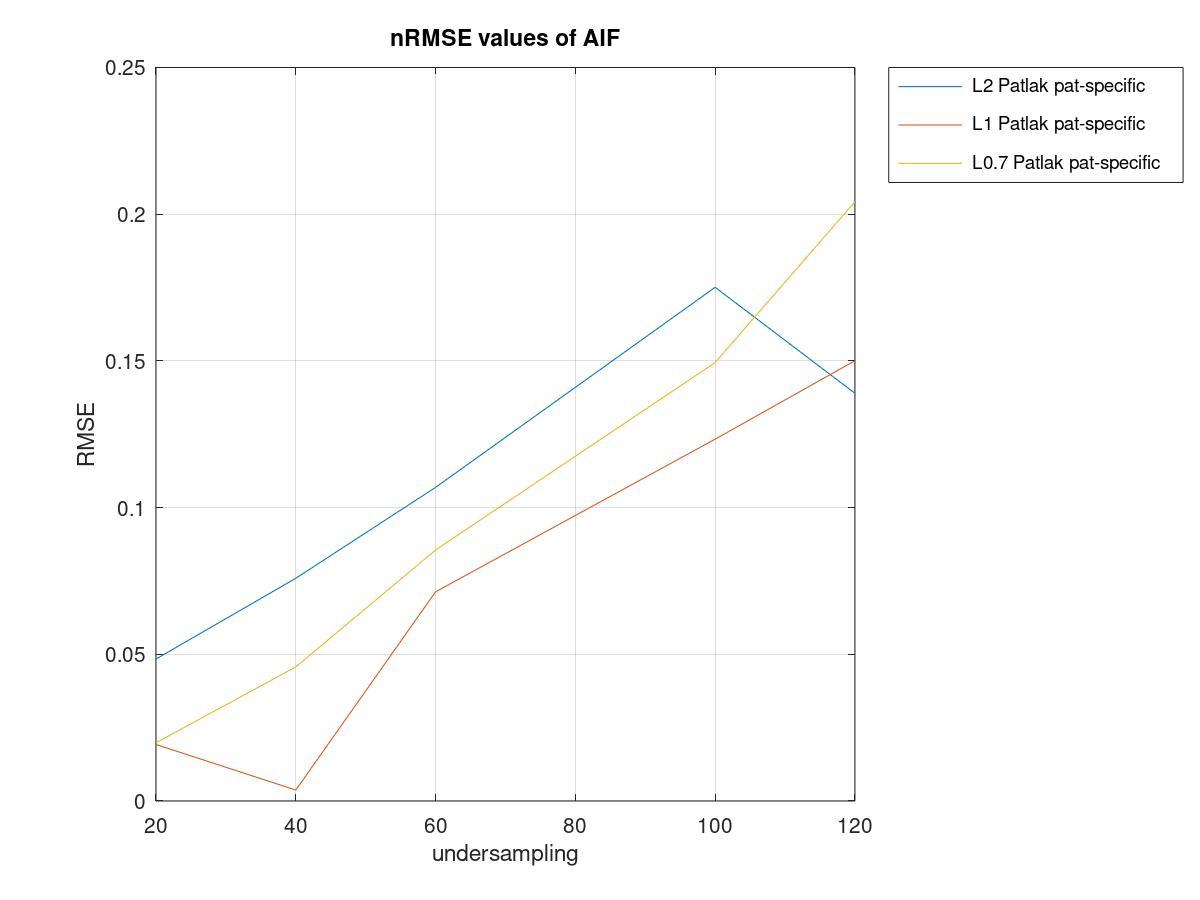 As suggested by ​Khalifa et al., 2014​, we can observe the simplicity of Patlak model as it omits reverse vascular transfer coefficient, Kep. This highly simplifies the model and makes it linear thus facilitating the easy extraction of concentration values from TK parameters. At the same time eTofts model, even though slightly more accurate than Patlak in some cases, fails to perform adequately due to its acceptance of pop-AIF and less flexibility in comparison with Patlak model. For all the above reasons, the Patlak model has evolved to be more popular in the quantitative analysis of DCE-MRI than eTofts model. Studies also claim that the eTofts method sometimes produces drastic errors as opposed to Patlak model.

We explored the implementation of the proposed methods of joint estimation of AIF and TK-parameters, weighing them based on their RMS errors. While L2-norm regularisation of Patlak model failed to perform on heavily undersampled data, the same on eTofts model seemed to show stable performance but with low accuracy. As we moved to Lp-norm (p≤1) , the accuracy visibly improved in TK parameter estimation, but at the cost of increased error in AIF estimation.

Methods which strike a balance between the L2 and Lp norms incorporating the strengths of each and also reaching the optimum solution quicker are worth exploring. The scarcity of DCE-MRI datasets that provide complete AIF information is a major setback in this regard.