In recent years due to the rise in performance of automatic speech recognition (ASR) systems, many applications process spoken speech transcripts such as machine translation, information extraction systems and dialog systems. The training set for these applications usually is well-written texts. Since spontaneous speech is unstructured, the spoken speech transcripts generated from automatic speech recognition systems consists of false starts, repetitions of the words or phrases, edit terms such as ‘I mean’ or ‘you know’ and filler terms like ‘oh’, ‘ahmm’ or ‘uh’. In order to increase the performance of working on these ASR-generated transcripts which is used to generate Indian Sign Language using machine translation, detecting and correcting these speech disfluencies is important in the preprocessing stages. Sequence models and concepts of natural language processing are applied in order to detect the speech disfluencies in the generated transcripts. Data collection and Corpus generation of ASR-generated disfluent transcripts along with their manually corrected transcripts is carried out for E-learning video courses like NPTEL and Stanford classes.

The objective of the project is real-time translation of content (spontaneous speech or lectures in classrooms) in a spoken language (typically English) into Indian sign language using MT. An example of an English sentence translated to ISL is as follows -

ISL - 'PAST ​ SCHOOL TEN PASS ONE NINE SEVEN ONE'

Spontaneous speech differs from written text as the former is not well rehearsed and is unstructured. It is observed that most people make repetitions of the words or phrases, use edit terms to correct themselves and add filler terms to fill prolonged pauses during spontaneous speeches. This phenomenon in spontaneous speeches is called Disfluency. Commonly observed categories of disfluency are -

Example of complex disfluency - "I need a bus ticket to Bangalore sorry I mean Chennai."

Datasets for MT have well written or cleaned training set. Therefore there is a mismatch between the trained dataset and ASR-generated transcripts fed as input to the model. This leads to decreasing the performance of the model and yielding bad translations. An example of translation which does not convey the intention of the speaker due to disfluencies is depicted in Fig 1. 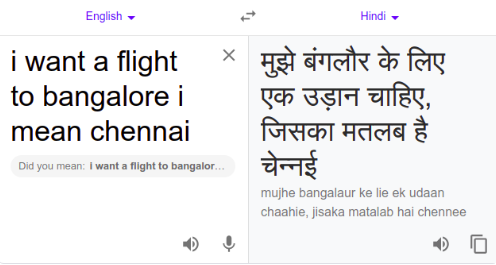 Wrong translation due to disfluency

Having disfluencies in the ASR-generated transcripts makes the translation to ISL difficult. Therefore, detecting the disfluencies and correcting them in the preprocessing stages is essential in this project.

Statement of the problem

The project aims at real-time translation of content (spontaneous speech or lectures in classrooms) in a spoken language (typically English) into Indian Sign Language. Building a corpus that can be used for translation of English to ISL and detecting the disfluencies in the spoken speech transcipts are carried out.

The main objectives include -

Detecting and correcting the disfluencies in preprocessing stages can help in increasing the performance of machine translation models, information extraction systems and dialog systems that process spoken speech transcripts.

Hany Hassan et al in 2014 proposed a new approach of identifying disfluencies firstly by simple-disfluency removal followed by segmentation and then the complex-disfluency removal. They propose CRF classifier to remove simple disfluencies. Then sentence boundary and punctuation detections are carried out using CRF classifiers restricting the annotation to three classes only, period, comma or nothing. Finally using a knowledge based parser complex disfluencies are detected. The difficulty in implementing this model is that a broad coverage of rules must be defined for the parser which is also able to maintain the grammer. They used a broad-coverage rule-based parser, NLPWin by Microsoft, to help identify disfluencies, which is not open-sourced.

Julian Hough and David Schlangen have carried out various combinations of utterance segmentation and disfluency detections in their experiments to identify disfluencies and in 2017 they presented the joint task of incremental disfluency detection and utterance segmentation and a simple deep learning system which performs it on transcripts and ASR results. Their architecture consists of input embeddings of words in a backwards window from the most recent word, durations of words in the current window (from transcription or ASR word timings) and POS tags for words in current window, which is passed incrementally to an RNN model with LSTM units. This model predicts pre-defined disfluent tags to each word of the input sentence. They also conclude in the paper that their joint-task system for disfluency detection and utterance segmentation shows good results and a new benchmark for the joint task on Switchboard data and due to its incremental functioning on unsegmented data, including ASR result streams, it is suitable for live systems.

Contrast to the work of Julian Hough and David Schlangen, Shaolei Wang et al ​say that the RNN method treats sequence tagging as classification on each input token and doesn’t model the transition between tags which is important in recognizing the repair phrases of multi-words. They also say that the sequence tagging methods and RNN methods have no power of modeling the linguistic structural integrity i.e the grammer of the text. They present a method that addresses this problem by implementing neural attention-based Bi-LSTM model to learn the conditional probability of the output which is an ordered subsequence of the input. They conclude with a note that experimential results reported good performance with an F1-score of 86.7 on the Switchboard corpus. In 2019, Qianqian Dong et al built transcript disfluency detection model on the basis of Transformer, which is the state-of-the-art neural MT model. They obtained an F-score of 89 on testing on the Switchboard data.

Since one of the aim of the project is translation of classroom lectures in English to ISL, to build a corpus for the MT model, platforms like NPTEL and Stanford online classes were scrapped to obtain ASR-generated transcripts along with the manually edited transcripts. 20000+ videos from NPTEL were scrapped for their transcripts and later filtered if manual transcripts were unavailable. 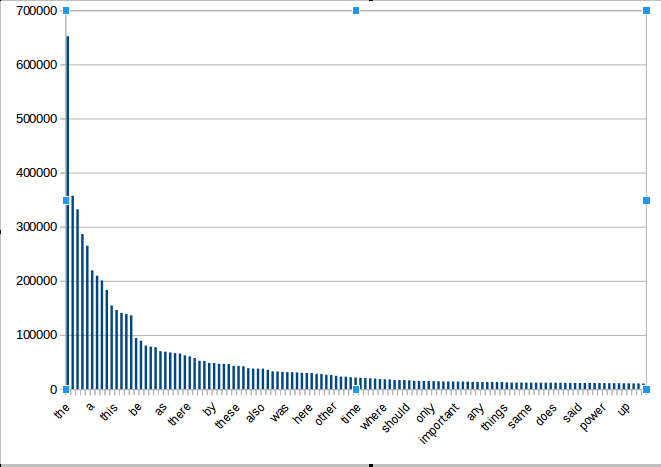 Method 1 implemented the approach presented in the paper by Julian Hough and David Schlangen.​

Disfluencies are typically assumed to have a tripartite reparandum-interregnum-repair structure as shown in Fig 3. Here 'loves' is the repair word that must replace the reparandum 'likes'. If reparandum and repair are absent, the disfluency reduces to an isolated edit term like 'uh' or 'er'. Each word in the input sentence is assigned a tag which lables the word as a fluent term '<f>', edit term '<e>', reparandum start word '<rms>', interregnum '<i>', repair term '<rps>' and so on along with their offset index. 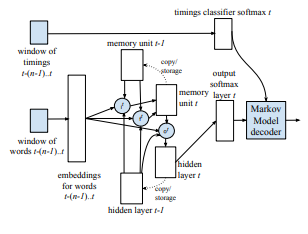 The dataset used for this experiment was the Switchboard dataset which has telephonic conversations between strangers. After identifying the representation of various notations used in the Switchboard, the training dataset had English sentences with disfluencies along with their cleaned sentences(clear of all disfluencies) as target. A few tuples of the dataset is shown in Fig 5. These sentences were cleaned by removing all special characters, converted to lower and '<start>' and '<end>' tokens were added to each sentence. 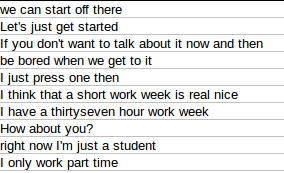 Given the categorical nature of words, the model must first look up the source and target embeddings to retrieve the corresponding word representations. The input vector then is put through an encoder model which consists of RNN model which gives us the encoder output of shape (batch_size, max_length, hidden_size) and the encoder hidden state of shape (batch_size, hidden_size). Each input word is assigned a weight by the attention mechanism (Bahdanau attention) which is then used by the decoder to predict the next word in the target sentence. Adam Optimizer was used to reduce the loss function.

On training the RNN model with LSTM units, examples of few test cases with correct results are shown in Fig 6. 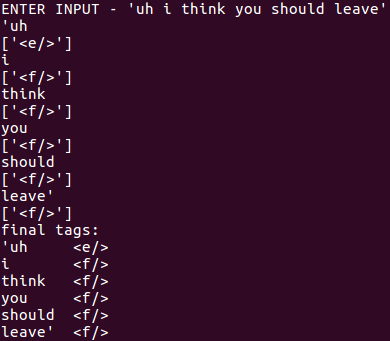 Test cases shown in Fig 7 gave incorrect results which gave insights that the model was overfitting on the term 'know' and sentences begining with 'I' and had to be further tuned. 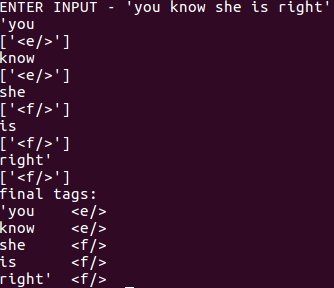 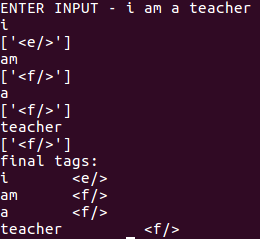 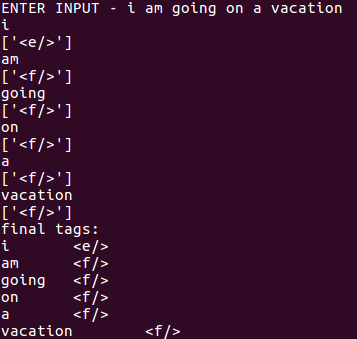 Loss obtained for each epoch

On training the neural MT model with Attention mechanism, attention maps of examples of few test cases are shown in Fig 9. 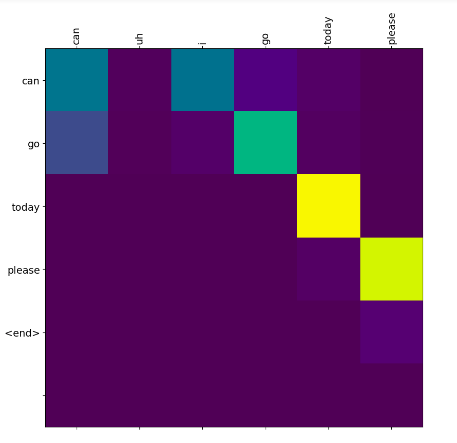 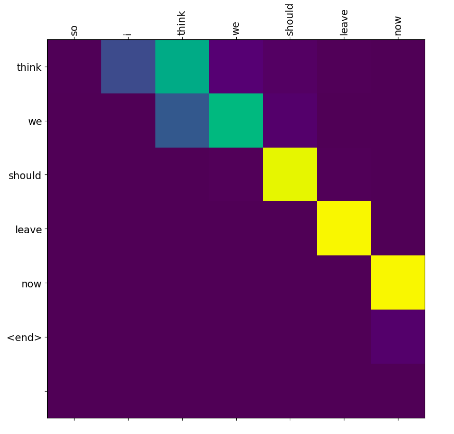 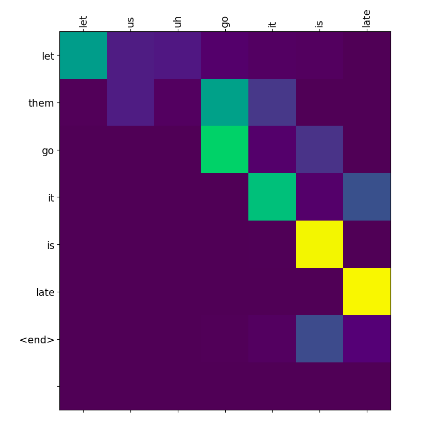 The implemented model was observed to be handling only the simple disfluencies and was overfitting on certain terms, for example in Test case 1-3 of Fig 9 where term 'I' was edited. Test case 4 of Fig 9 showed the main drawback of this model i.e during translations new words would replace certain terms of the input sentence due to the attention weights. The term 'us' was replaced with 'them'. Also this model could not handle complex disfluencies.

The approach presented by Julian Hough and David Schlangen provides good results for both simplex and complex disfluencies. It needs to be further tuned to avoid overfitting the model on certain commonly used disfluent terms.

The Neural Machine Translation model with attention mechanism handled only the simplex disfluencies. To avoid new words replace the input words, the loss function must be modified such that it restricts the output words to belong to the set of input words. To handle complex disfluencies, Transformer model which is the state-of-the-art NMT model could to be studied.

I am grateful to the Science Academies' for giving me this wonderful opportunity. I would like to thank my guide, Dr. Dinesh Babu Jayagopi for his guidance and support throughout the research work. Also, I would like to thank my mentor, Mr Shyam Krishna for providing valuable insights and helping me figure out the various intricacies involved. I am also thankful to my family and friends for their continuous support.