Japanese Encephalitis (JE) is caused by Japanese Encephalitis virus (JEV), which is transmitted through mosquitoes (Culex sp.). The cases of the JE have been frequently reported in Southeast Asian Countries. The JEV infection in brain cells leads to the release of several cytokines and chemokines; which activate the microglial cells. Microglial cells are the resident macrophages of CNS. The production of Interleukin-6 by microglial cells play an important role in the host defence mechanism as it can act as both pro-inflammatory and anti-inflammatory cytokine depending upon the conditions. IL-6 can also induce the acute phase response during chronic inflammation. The microglial cells were infected by JEV and confirmed by qPCR. The JEV infection to microglial cells suppresses the IL-6 expression, which was confirmed by qPCR. The suppression of IL-6 may be the strategy adopted by JEV to evade from host’s innate immune response.

Japanese Encephalitis (JE) is a mosquito-borne arboviral disease and its etiological agent is Japanese Encephalitis Virus (JEV) which belongs to Flaviviridae family. Other members of this family are Dengue virus (DENV), Zika Virus (ZIKV), Yellow Fever virus (YFV) and West Nile virus (WNV). The JEV circulates in enzootic cycle where the pigs are the reservoir for infection, water birds and mosquitoes are the vectors and humans are accidental dead-end hosts ​​​1​​ . JEV is endemic in Southeast Asia and around 68,000 cases are reported annually. The new-borns and the old-age people are at higher risk for JEV infection. The incubation period of JEV usually lasts for 4 -14 days with mild fevers and headache which progresses to vomiting and gastrointestinal pain. The severity of disease is characterized by the rapid onset of high-grade fever, headache, seizures, spastic paralysis and neck stiffness, which ultimately lead to death. The symptomatic treatment regime is followed during JE. Moreover, there is no therapeutics to prevent the encephalitis during JEV infection due to which, 30%-50% case fatality rate has been reported and the survivors suffer from permanent neurological and psychiatric sequelae ​2​ .

Japanese Encephalitis (JE) is caused by Japanese Encephalitis Virus (JEV), an arbovirus which belongs to the Flaviviridae family. It is a vector-borne disease spread by mosquitoes of Culex sp. (mostly by Culex tritaeniorhynchus). JEV was first reported in 1871 in Japan and today JE is frequently reported from Southeast Asian countries. Humans are considered as ‘dead-end host’ and thus disease does not transmit through physical contact. The JEV undergoes enzootic cycle among mosquitoes, pigs and/or water birds, where the pigs are the amplifying hosts, water birds and mosquitoes are the vectors and humans are accidental-dead end hosts ​7​ . The JEV transmission enhances during the rainy season when mosquito’s population increases.

JE involves neurological signs and symptoms which primarily affects children between the age of 0-15 years and old-age people ​8​ . The symptoms include headache, fever, convulsions along with gastrointestinal pain and vomiting. There are no prescribed anti-viral drugs against JE and vaccination is the only option. As a result, about 30%-50% case fatality rate has been reported in JE patients and the survivors suffer from permanent nervous defects and psychological problems.

In India, JE was first reported in 1955 from Southern states of Madras, now Tamil Nadu. At present, it is endemic in 171 districts of 19 states mainly in Uttar Pradesh. The vectors for JEV transmission in India are Culex tritaeniorhynchus, C. vishnui and C. pseudovishnui. These mosquitoes breed in the water with luxuriant vegetation mainly in paddy fields. According to the census of NVBDCP (National Vector Borne Disease Control Programme), 1678 JE cases with 182 deaths were recorded in 2018, while 321 cases and 30 deaths have been reported till June 2019. The Symptomatic treatment regime is followed for JE patients, along with supportive clinical management. The fluid and electrolytes are administered to manage the initial acute phase of infection. Steps taken by the government include the establishment of physical, medical and rehabilitation (PMR) department and a Vector-Borne Disease Surveillance Unit (VBDSU) at BRD Medical College, UP; supplying free of cost diagnostic kits from NIV, Pune, etc ​9​ .

Live attenuated vaccine of strain SA 14-14-2 was developed by China against JEV which was approved by WHO in 2013 ​10​ . In India, JENVAC, prepared by Bharat Biotech (Indian strain Kolar-821564XY), is an inactivated JEV vaccine propagated in Vero cells ​11​ . In addition, inactivated mouse brain-derived JE vaccine is used which was developed by using Nakayama strain of JEV in Central Research Institute Kasauli, Himanchal Pradesh ​9​ .

Microglial cells are the resident macrophages of the nervous system, involved in immune surveillance and phagocytosis. Microglial cells play an important role in both innate and adaptive immune response in CNS, by migrating to the site of infection and injury ​5​ . The sub-ventricular zone (SVZ) from where neural progenitors cells (NPCs) originate are infected by JEV. The production of pro-inflammatory cytokine (IL-6) activates the microglial cells and promotes neuronal killing in bystander fashion. Further, it was reported microglial cells act as a reservoir for JEV infection ​12​ .

Role of IL-6 in Inflammation

The expression of pro-inflammatory cytokines (IL-1β, IL-6, TNF-α) increases during inflammation. Interleukin-6 (IL-6) is a glycosylated soluble pleiotropic cytokine (molecular weight- 26KDa) involved in immune response, inflammation, acute phase response and haematopoiesis ​13​ . It is also involved in B and T cell differentiation ​14​ . At the initial phase, IL-6 along with chemokines help in chemotaxis ​15​ . IL-6 increases lymphocytic response during viral infection. It can act as both pro-inflammatory and anti-inflammatory cytokine. The IL-6 level helps in maintain the immunological haemostasis through classical-signalling pathway whereas the excessive production triggers a series of inflammatory response through trans-signalling pathway ​6​ . Therefore, IL-6 activates the immune response against the etiological agent.

The total RNA (500ng) for each sample was converted into cDNA by using SuperScript First-strand synthesis kit (Invitrogen).

First step was the addition of following reagents (Table-1):

Tubes were short spinned and incubated at 65°C for 5 min in the thermocycler.

The master mix was prepared by adding following reagents (Table-2):

The 9µl master mix (10X RT Buffer, MgCl2, DTT, RNase out) and 1µl Reverse Transcriptase enzyme were added to each tube and were given a quick spin.

The tubes were kept in the thermocycler for cDNA synthesis with the following thermal profile (Table-3).

At last, 1µl of RNase H were added to each tube and kept for 20 min at 37°C in thermocycler. After completion, the cDNA were stored at -20°C.

The reverse and forward primers were diluted and a reaction mixture was prepared by adding the following reagents (Table-4).

The RNA were isolated from the mock-infected (control) sample and JEV infected samples at different time points (12hrs, 24hrs and 48hrs) and quantified by using Nanodrop Spectrophotometer (Table-5).

The total RNA (500ng) from all the samples was converted into total cDNA by using random hexamers and SuperScript first strand synthesis kit. The cDNA was used to perform qPCR and the expression of JEV NS3 and IL-6 gene were quantified in JEV infected microglial cells at different time points.

The qPCR of control and JEV infected samples were performed and the expression of JEV NS3 gene has been observed maximum at 24hrs (Figure-1). The expression of IL-6 gene was found to decrease during JEV infection in microglial cells (Figure-2). Although JEV infection activates the immune response, in the present study the JEV infection suppressed the release of pro-inflammatory cytokine, IL-6. This may be the strategy adopted by JEV to actively replicate inside the host and evade from host immune response. The suppression of pro-inflammatory response has been reported to facilitate virus persistence in cells ​16​ . 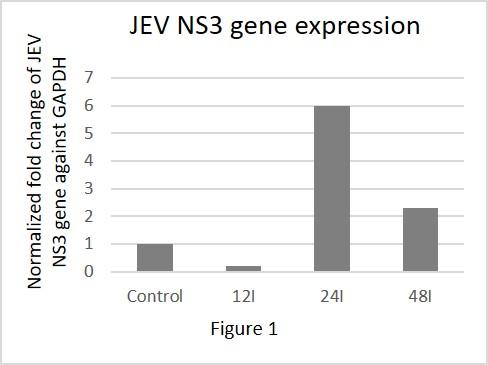 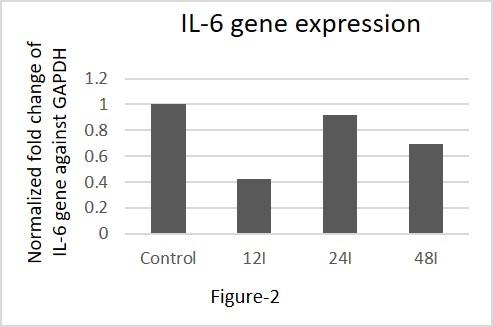 The microglial cells were infected by JEV and the maximum replication has been observed at 24hrs post-infection. The suppression of pro-inflammatory response by JEV during infection may be the strategy adopted by JEV to evade the innate immune response. The evasion of host innate response and productive replication inside the host further prove the notion that microglial cells may be used as a reservoir for JEV infection. The molecular mechanism underlying the phenomenon of immune evasion by JEV has to be explored in order to develop drugs and therapeutics against JEV.

First and foremost, I heartily thank Indian Academy of Sciences (IASc-INSA), Bangalore, for providing me a golden opportunity to carry out this project.

It is my radiant sentiment to place on record my best regards, deepest sense of gratitude to Prof. Sunit K. Singh, Head-Molecular Biology Unit (MBU), Institute of Medical Sciences (IMS), Banaras Hindu University (BHU), for giving me constant support, advise and precious guidance which made me complete the project duly.

I sincerely record my thanks to Ms. Meghana Rastogi for her kind advice that helped me to execute my work along with her expert assistance.

I am equally thankful to Ms. Astha Shukla, Ms. Neha Pandey and Mr. Utkarsh Bhardwaj for their encouragement and moreover for their timely support and guidance until the completion of my project work.

I owe my special thanks to the technical staff of Molecular Biology Unit, Institute of Medical Sciences (IMS), Banaras Hindu University (BHU) for their corporation and help.

It is my privilege to express profound regards and a deep sense of gratitude to my teacher Dr. Anuj Tewari, Assistant Professor, Department of Veterinary Microbiology, College of Veterinary and Animal Sciences, Govind Ballabh Pant University of Agriculture and Technology, Pantnagar, for his guidance, valuable suggestions and encouragement. I am extremely thankful to him for forwarding my recommendation letter to IASc, Bangalore.

Last but not least, I am so grateful to my beloved parents, colleagues and friends who have supported me with their valuable suggestions and guidance.