The groundwater has high magnitude of nutrient concentration due to various natural as well as anthropogenic activities. This nutrient-rich groundwater gets exchanged with the sea water at the ocean-land interface, and it is called Submarine Groundwater Discharge, resulting in the increased nutrient level in the coastal water. For the marine phytoplankton, major limiting nutrients are nitrogen and phosphorus. Due to the Submarine Groundwater Discharge, the phytoplankton biomass increased due to input of abundant amount of nutrients causing them to flourish. The phytoplankton are the base of the marine food webs, so any change in the phytoplankton composition or abundance will have huge impacts on all the other dependent living organisms of coastal ecosystem. To understand the effect of groundwater intrusion on marine phytoplankton, several ground water samples were collected in and around Visakhapatnam city region to evaluate the spatial variability in nutrients levels in the ground water. The coastal waters samples were also collected, and some proportion of ground water was added from different regions and incubated for 5 days to examine the change in phytoplankton composition. The incubated samples for phytoplankton are being analyzed to examine the response of ground water addition to the coastal water. Nutrients (nitrate and phosphate) are measured following colorimetric technique using autoanalyzer.

The primary objective of the work was to understand the influence of nutrients input through submarine groundwater discharge on marine phytoplankton.

Submarine groundwater discharge (SGD) has been defined as “direct groundwater outflow across the ocean–land interface into the ocean” (Church, 1996). It is place at the ocean-land interface where the groundwater mixes with the seawater. The physical as well as chemical properties of sea water changes because of the discharge, which delivers the groundwater nutrients to the sea water. Since the groundwater is highly dependable natural resource, it is extremely polluted due to various anthropogenic activities. The concentrations of nutrients in the sea water and ground water are different; much higher in groundwater. The exchange of ground water with coastal water increases nutrients level in the coastal water and have significant impact on coastal phytoplankton abundance and composition. The excessive nutrient addition to coastal water may result in the formation of red tides or Harmful Algal Blooms (HABs), which have significant impact on the ecosystem dynamics. Nitrogen and phosphorus are the major limiting nutrients for marine organisms. For the balanced growth, marine phytoplankton requires nitrogen and phosphorus in a ratio of 16N:1P. The submarine groundwater discharge delivers plenty of the limiting nutrient to the marine organisms. This lessens the stress of limiting nutrient and results in proliferation of phytoplankton in the marine ecosystem. Thus, resulting the change in abundance and composition of the phytoplankton.

The phytoplankton provides the base of the food chain in the marine ecosystem. Any change in the phytoplankton abundance or composition will therefore affect the whole marine biodiversity. The SGD causes enormous growth of phytoplankton, sometimes resulting in eutrophication, which in turn causes anoxic condition and hence death of the marine organisms. The coastal population living along the coastline that highly depends on seafood as a source of their sustenance and income might be affected due to these changes. SGD may result in the formation of HABs which will have toxic effect on marine organisms and on the human beings consuming it.

The procedure followed for Lugol’s iodine solution preparation is:

To understand the effect of groundwater intrusion on sea water phytoplankton, a specific amount of groundwater sample is mixed with the sea water sample and incubated at room temperature in a semi-shady place. With the groundwater collected from two different locations, two sets of experiment were set up. In each set there were three samples:

The samples collected for 5 days were analyzed for nutrient concentration (nitrogen & phosphorus) and the phytoplankton abundance. The nutrient concentrations were measure by the colorimetric technique using the autoanalyzer. The nitrate concentrations in the samples were measured with the EcoLAB Insitu nutrient autoanalyzer. The phosphate concentrations were measured using SYSTEA µMAC-1000 autoanalyzer. For the phytoplankton abundance analysis, the following steps were followed: a) 1 litre sample that was collected was siphoned using a siphoning pipe and phytoplankton mesh of size 10 micron. b) The volume of the sample was reduced to 10 ml and was stored in polypropylene tubes. c) 1 ml of the siphoned sample was taken and spread over the gridded microscopic slide and observed under the microscope. d) The number of phytoplankton was counted in 10 squares from each side and the centre of the slide under the microscope at 40X resolution. e) The total number of phytoplankton for each sample were added up and used for further calculations. f) The phytoplankton count from each square corresponds to the number in 1 microliter of sample, since the 1 ml sample is distributed in 1000 squares on the gridded slide. So, counting 10 squares from each corner and the center of the slide will give the number of phytoplankton in 50 microliter of sample which can be extrapolated for the total amount of sample.

The data for nutrient concentration and phytoplankton abundance were compared for all set of samples and the results were interpreted accordingly.

The pH data indicate that the groundwater sample from both the locations are slightly acidic. There is no health-based guideline value for pH according to WHO, but pH lower than 6.5 can have corrosive effect and can leach metals.

NITRATE: The nitrate concentration was measured using the EcoLAB Insitu Nutrient Auto analyser. The alternative days samples were chosen to be examined i.e., day 1, day 3 and day 5 sample. The concentration of nitrate in the samples of both sets A and B, calculated from the absorbance values are listed in the table below:

Graphical comparison of nitrate concentration in samples of set A:

The concentrations of nitrate in the samples of set B:

Graphical comparison of nitrate concentration in samples of set B: 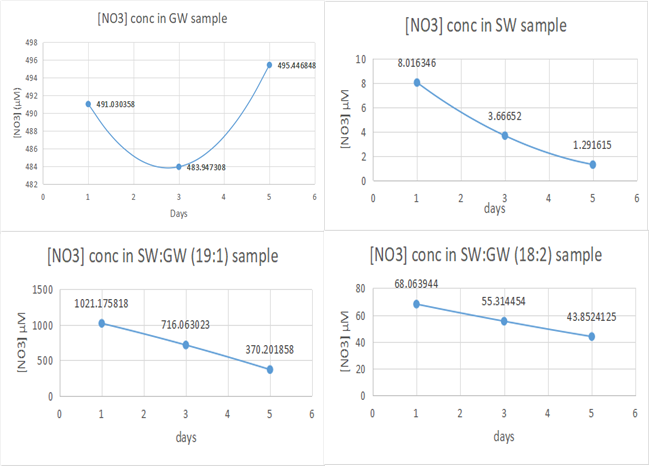 Graphical comparison of the phosphate concentration in samples of set A: 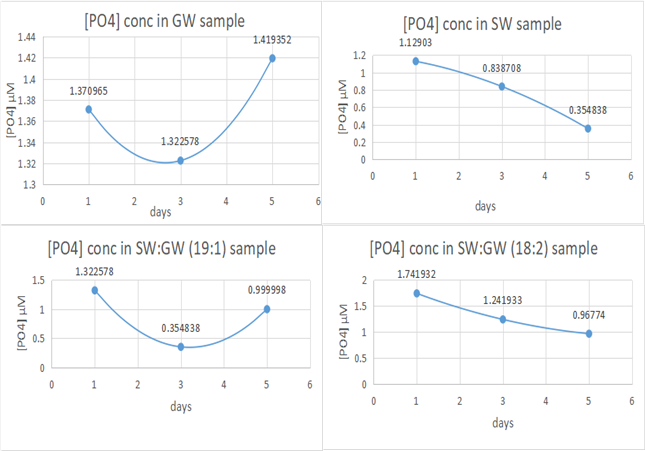 The concentration of phosphate in samples of set B:

Graphical comparison of the phosphate concentration in samples of set B: 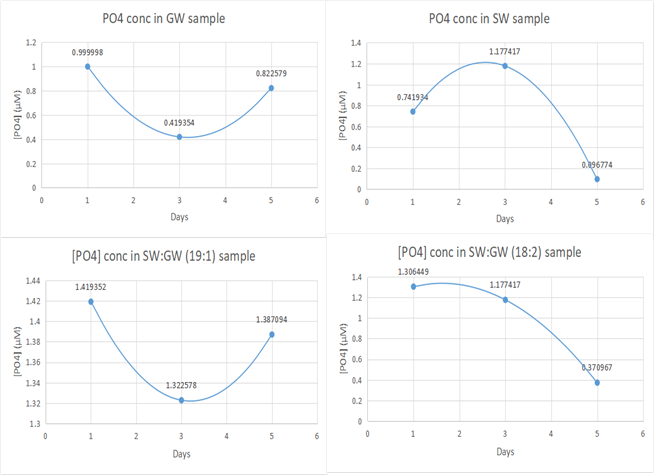 The phytoplankton abundance in sample of set A:

The abundance of various samples was compared graphically: 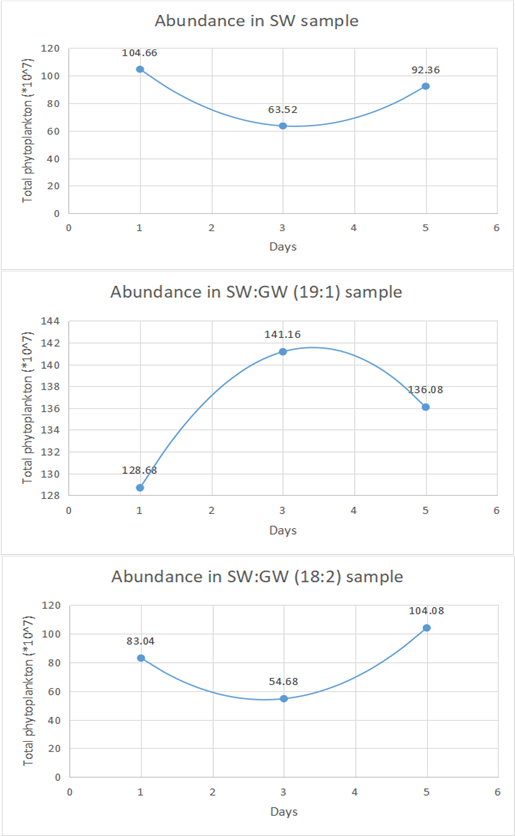 The phytoplankton abundance in samples of set B: 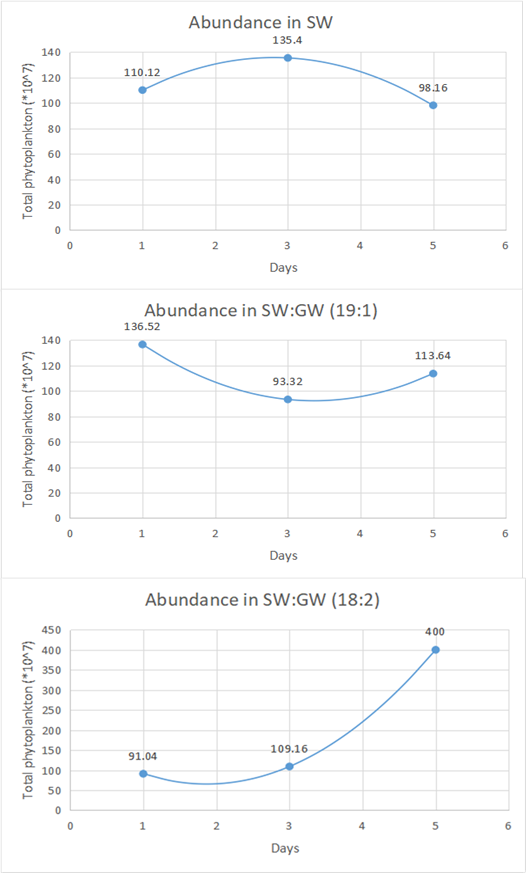 The overall data of Set-A and Set-B can be compared from the tables given below:

The groundwater contains high concentration of nutrients, especially nitrate. The nutrient concentration increases even more when the groundwater gets polluted due to the anthropogenic activities. When this nutrient-rich groundwater is exchanged with the coastal water, it delivers the nutrients. Our results suggest that mixing of ground water with coastal seawater results in significant increase in nitrate, however the increase in phosphate was rather minimal. Therefore, the mixing experiments conducted in this study were mainly controlled by availability of phosphate rather than nitrate. Increase in the phytoplankton abundance was observed in 3 out of 4 experiments by 10–400%. This change must be considered as a net increase, as some of the phytoplankton might have been removed by the micro zooplankton grazing. These experimental results can be further used for comprehensive studies by measuring the phytoplankton composition, growth rate, grazing rates of micro zooplankton to examine the gross impact on phytoplankton composition and the possible changes in diversity of phytoplankton due to mixing of ground water with coastal seawater.

I would like to thank the Indian Academy of Science (IAS), Bangalore for selecting me as a summer research fellow for the SRFP-2019 and providing me the wonderful opportunity. I take immense pride to have worked under the supervision of Dr. VVSS Sarma, Senior Principal Scientist, National Institute of Oceanography-Regional Centre (NIO-RC), Visakhapatnam. He has been extremely kind in accepting me to work under him and giving me the chance to get a great learning experience and exposure. He has given me his valuable time in guiding me throughout the project. He has been patient in teaching me and correcting my mistakes whenever and wherever needed. I am thankful to Dr. Jagadeesan Loganathan, Scientist at NIO-RC for his support and guidance while handling the microscope. I am also thankful to Mr. Arindam Basu, intern at NIO-RC for providing the nutrient concentration data of the groundwater samples and for all the support. Lastly, I would like to thank my parents and brothers for always being very supportive and encouraging towards my studies.

1. Knee K, INPUTS OF NUTRIENTS AND POLLUTANTS TO HAWAIIAN COASTALWATERS FROM SUBMARINE GROUNDWATER DISCHARGE, A DISSERTATION SUBMITTED TO THE DEPARTMENT OF GEOLOGICAL AND ENVIRONMENTAL SCIENCES AND THE COMMITTEE ON GRADUATE STUDIES OF STANFORD UNIVERSITY, 2010