Curcuma longa var Lakadong, belonging to family Zingiberaceae, is one of the prominent varieties of turmeric across the world, and is renowned for its high curcumin content of up to (8%). Curcumin is one of the principal bio-active compounds found in the underground rhizomes of turmeric and is reported to possess immense medicinal properties. However, it is a challenge to meet the increasing demand of this variety because of the slow rate of propagation through vegetative means and lack of seed set in C. longa. To mitigate the problem of multiplication, micropropagation of Lakadong turmeric has been taken up to produce plantlets in vitro. Although tissue culture based micropropagation is a promising approach, however regeneration of plantlets through this culture technique often gives rise to somaclonal variants which pose as a major hindrance to maintenance of germplasm of the high-quality species. Therefore, the present study is envisaged to check the genetic fidelity of the in vitro raised plantlets of Curcuma longa var Lakadong turmeric through various DNA based molecular markers such as RAPD, ISSR and DAMD to rule out the occurrence of somaclonal variation in in vitro raised plants. The combination of these dominant, single primer marker systems is expected to offer a clear and reliable picture of the genetic stability of the in vitro grown plants.

Curcuma longa, commonly known as “Turmeric” belonging to family Zingiberaceae and order Zinziberales of monocots is an important genus which comprises of 47 genera and1400 species including important species like cardamom and ginger (Nair 2013. Most of the species are perennial, tropical herbs and are cultivated all over the world including India, the north east region is the highest producer of turmeric with an annual productivity of 1.5 tonnes against 3.9ton/ha in the country(Singh et al 2013).

Turmeric plays an important role in Indian economy as it occupies 6% of total area under spices (Choudhary 2018). The innumerable therapeutic properties of turmeric can be attributed to the bioactive compound, curcumin found in its underground rhizome. It is a yellow coloured pigment which has varied therapeutic usage and has recently been identified as one of the key compound for treating Alzheimers disease (Anand Raj et al 2014).

Thus, micropropagation through tissue culture can be utilized for rapid clonal multiplication, as well as for its conservation. All plants possess the capacity of totipotency, i.e. the ability of a single cell to differentiate into a complete plant. Plant tissue culture broadly refers to the cultivation, in vitro, of all plants parts, whether a single cell, tissue or organ under aseptic conditions. Micropropagation generally helps in production of identical plantlets. It is the rapid vegetative propagation of plants under in vitro conditions of high light intensity, controlled temperature and a defined nutrient medium. In micropropagation rapid proliferation is achieved from tiny plant part such as stem cuttings, auxiliary buds, and to a limited extent from somatic embryos. The process of micropropagation is usually divided into several stages i.e., propagation, initiation of explants, subculture of explants for proliferation, shooting and rooting, and hardening. These stages are universally applicable for large-scale multiplication of plants (Bhojwani and Razdan 1986).Thus, micropropagation techniques are a must for conservation and large scale production of medicinally important species within short time span and limited space.

Fresh rhizomes of C. longa were acquired with the help of Ms. Trinity Saioo, a Self Help Group volunteer, from West Jaintia Hills, Meghalaya. Vegetative buds sprouting from the rhizomes were used as the explant material for the study.

Murashige and Skoog (MS) medium (1962) was utilized as the nutrient medium supplemented with 3% (w/v) sucrose and 0.75% agar augmented with various combinations of growth regulators such as auxins and cytokinins. The pH of the medium was adjusted to 5.6-5.8 before autoclaving. The medium was dispensed in 15-ml aliquots into 25×150 mm culture tubes and autoclaved at 121°C and 1.1 kg cm–2 pressure for 15 min.

The rhizome buds were surface sterilized by washing in sterile distilled water for 2-3 times and then in 70% ethanol for 5-10minutes. The seeds were then washed in 0.1% NaOCl solution for 15-20 minutes and finally they were thoroughly rinsed in sterile double distilled water for at least four times under aseptic conditions in the laminar air flow.

Inoculation of the explant material

After sterilization, the buds were aseptically transferred to culture tubes containing MS media supplemented with growth regulators. All the cultures were incubated at 25±2°C with a relative humidity of 50–60% and a 12-h photoperiod in a walk-in growth chamber.

The vegetative buds were cultured on different combinations of Kinetin (KIN) and Indole-3-acetic acid (IAA) for shoot elongation (Table 1). The regenerated shoots were sub-cultured after intervals of 15-20 days.

[a] DNA isolation from in vitro plantlets of C. longa

DNA was isolated from randomly selected in vitro regenerated plantlets and also from the donor plants using CTAB method as described by Doyle and Doyle, 1987with minor modifications. The quality and quantity of DNA obtained were further determined.

[b] Quality and Quantification of DNA

The quality of the DNA isolated was assessed using Agarose gel electrophoresis and ethidium bromide stain to visualize it in the gel. Quantitative analysis to measure the yield of DNA was carried out using Nanodrop spectrophotometer.

PCR amplifications of genomic DNA with a number of RAPD primers were carried out to analyse the genetic stability of the in vitro grown plants. The PCR reaction was carried out for 30 cycles with the conditions for initial denaturation at 94ºC for 3 mins, followed by denaturation at 94ºC for 2 mins, annealing at 42ºC for1 min and extension at 72ºC. 3µL of each primer were used for each reaction along with the reaction mixture containing genomic DNA, MgCl2, dNTP, buffer and Taq Polymerase (ThermoFisher). The PCR products were resolved by electrophoresis on a 1.5% agarose gel stained with EtBr and were visualized using Gel Documentation System.

A dendogram was constructed using the NTSYS Software for determining the genetic stability of the in vitro raised plantlets. The gel profiles obtained using RAPD primers were scored and the Dendogram was generated (Table 2).

The observation and results obtained from the study are presented in detail and discussed as follows:

In vitro regeneration of C. longa 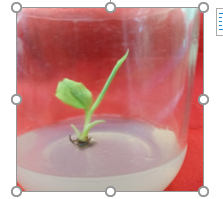 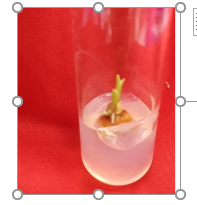 The genomic DNA isolated from field grown (donor) and in vitro grown plantlets of C. longa (Lakadong) were qualitatively analyzed on 0.8% agarose gel in 1xTAE buffer. The gel was imaged in gel documentation system (Figure 4). 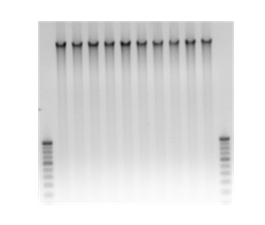 Quantitative analysis of genomic DNA was done using Nanodrop Spectro photometry by considering the A260/280 ratio.

Quantification of DNA isolated from field grown and in vitro regenerants of C. longa

Somaclonal variations are very common in tissue culture based micropropagation systems. To ensure the genetic stability of the regenerated plants of C. longa, DNA isolated from tissue culture-raised plants were evaluated with the DNA of the donor. In this background, we assessed finger printing profiles of the culture regenerants and of the donor plants done by RAPD markers to confirm whether the plantlets were genetically stable or not. A total of 10 randomly selected RAPD primers were tested for the assessment of genetic stability. Out of these, only 5 primers produced clear, scorable and reproducible monomorphic bands (Figure 5 -9). The number of bands for each primer varied from 3 to 7(Table 2). RAPD markers have the ability to amplify different regions of genome thus result in better analysis of genetic affinity. No polymorphism was detected during the RAPD analysis of in vitro raised plants with the mother plant (Figure 4), thus proving the uniformity of the regenerated plants with the field grown donor was maintained, indicating high genetic stability among the clones. 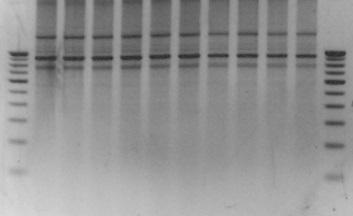 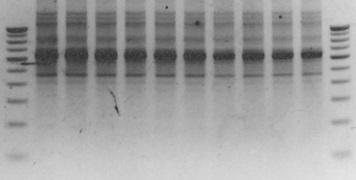 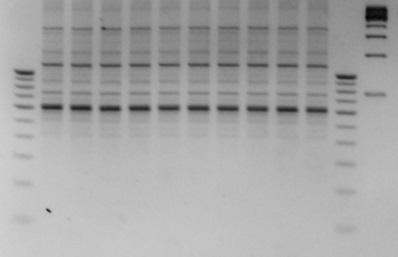 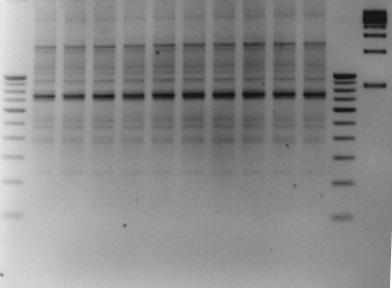 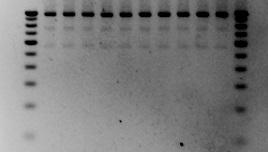 The Dendogram generated using NTSYS Software revealed that almost all the plantlets generated through in vitro propagation were identical to the donor plant, thereby suggesting the genetic fidelity of the cultures. Only one plant indicated somaclonal variation which can be attributed to repeated sub-culturing and exposure to artificial conditions. 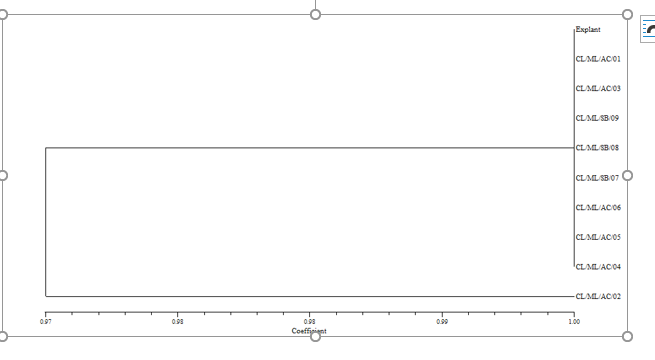 Plant tissue culture plays an important role in the conservation of medicinal plants for achieving rapid multiplication and reintroduction to nature (Neeraj et al 2017). The present study was undertaken to standardize an efficient protocol for large scale cost-effective multiplication of true-to type plantlets from different explants from an elite plant and to analyse the genetic stability of the regenerated plantlets using RAPD markers.

The in vitro regenerated plants in the present study were highly uniform and did not show any detectable variation phenotypically when compared with that of the mother plant. However, the validation of the similarity at genetic level by molecular markers is highly essential as sometimes mutation induced by tissue culture cannot be detected phenotypically as the structural difference in the gene products are not enough to alter the phenotypes. The detection of genetic fidelity in tissue culture raised plant has been reported by several workers using RAPD cost effectiveness and requirements for small quantity of DNA. However, the efficiency of individual molecular markers to detect genetic variability is always not reliable. As a result, to test the similarity at the genetic level, a combination they usually amplify different regions of the genome. Thus, in the present study, clonal fidelity of 9 randomly selected in vitro plantlets as well as the donor plant was checked by RAPD markers

Comparison of the bands with the mother plant revealed the monomorphic nature and true-to type clones. Arbitrary primers (RAPD) were successfully employed for establishing genetic fidelity of micro propagated plants. This molecular marker has validated the genetic stability of tissue culture raised plants. In our study, the banding pattern observed in in vitro raised plantlets as compared with that of mother plant showed no changes, indicating the genetic uniformity. The RAPD technique has been used successfully for analysing the genetic stability of species propagated through in vitro techniques (Martins et al. 2004; Lakshmanan et al. 2007.

Success of any work depends upon the dedication, sincerity, and hard work. It also requires some ingredients such as motivation, guidance, encouragement and time. A whole heart effort altogether makes the project useful and meaningful. My first and foremost heartfelt gratitude to Indian Academy of Sciences (IAS) for bestowing with INSC-INSA-NASI Summer Research Fellowship Programme – 2019. I would especially like to convey heartfelt thanks to my supervisor, Prof. Satyawada Rama Rao, North Eastern Hill University, Shillong, for his vital support, Guidance and providing such a wonderful Research Lab experience. I wish to record my thanks to Prof. Rishikesh Autade, Principal, College of Agriculture Biotechnology, Loni and all my loving and caring Teachers for guiding me in the right path. I will never forget the valuable suggestions given by all the Research Scholars who provided comfortable and friendly lab environment. My acknowledgement wouldn’t be complete if I do not thank to my parents enough, who supported, guided, encouraged me constantly and most importantly believed and confided in my abilities. Above all glory and praise be to the lord for always being there.