This project aims to study the optical absorption and photoluminescence (PL) of Hexa thio benzene acid. Optical absorption refers to how the photons of incident electromagnetic radiation are absorbed by matter thereby changing this photon energy to its internal energy. Using the recorded data, absorbance vs. energy curve is obtained. Also the band gap is obtained from the tauc plot. Photoluminescence is the emission of light after the absorption of photons. When light is directed onto a sample, it absorbs the photons. The energy absorbed excites the electrons to permissible higher energy levels. This excess energy is then emitted in the form of light. This is photoluminescence. PL spectroscopy is useful in characterization of electronic and optical properties of semiconductors and molecules. Under this project the PL spectroscopy of Hexa thiobenzene acid is studied with the help of the plots of intensity vs. wavelength. Energy band gap can also be obtained from photoluminescence.

The absorbance of an object refers to the quantity of incident light that is absorbed by it. When white light (that consists of light of various wavelengths) is focused on a sample, the photons that match the energy gap of the molecules are absorbed. That absorbed energy excites the molecule. Other photons are transmitted unaffected. This transmitted light appears as the complementary colour if the radiation lies in the visible range (380nm–750nm). Thus by studying the transmition for various wavelengths an absorption spectrum can be obtained. 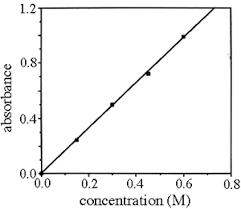 All solids have valance band and conduction band. The energy difference between these two is called the energy gap or band gap. This energy gap is quantitatively equal to the energy required to promote a VB electron (Bound to the atom) to the CB (where the electron can move freely and act as a charge carrier). When a photon of energy equal to this band gap energy falls on an electron , the electron gains enough energy to overcome the forbidden energy gap and thus becomes a CB electron. But this excited state is unstable and the electron again comes back immediately to VB by releasing the excess energy. The energy is emitted in terms of a photon having energy equal to the band gap energy. Thus by studying this emitted photon we can directly measure the band gap energy of the material. The emission of photon of particular wavelength after the material is photoexcited is known as photoluminescence and is a helpful tool in finding the band gap energies of various materials.

OBJECTIVES OF THE RESEARCH

➤To obtain the optical absorption of Hexa thiobenzene acid.

➤To obtain the photoluminescence (PL) of Hexa thiobenzene acid.

➤To obtain the band gap from the recorded data.

Beer-Lambert Law states that: when a beam of light is pased through a solution of absorbing substance, the rate of decrease of intensity of radiation with the thickness of the solution is proportional to the incident radiation as well as the concentration of the solution.

Mathematically it is expressed as:

= Intensity of the light incident upon the sample,

I = Intensity of the light leaving the sample,

c = Molar concentration of the solute,

l = Path length of the beam of light through the material sample,

UV spectroscopy deals with the absorption of light in the UV or visible region of the spectrum. The transition that result in the absorption of electromagnatic radiation in this region corresponds to the energy difference between the ground state and the higher energy state (). Generally, the most probable transition is from the Highest Occupied Molecular Orbital (HOMO) to the Lowest Unoccupied Moleculer Orbital (LUMO).

Molecules that contain bonding and non-bonding (n) electrons can absorb energy in the form of UV or visible light to excite the electrons to higher anti-bonding molecular orbitaned. Some of the important transitions with increasing energy are: 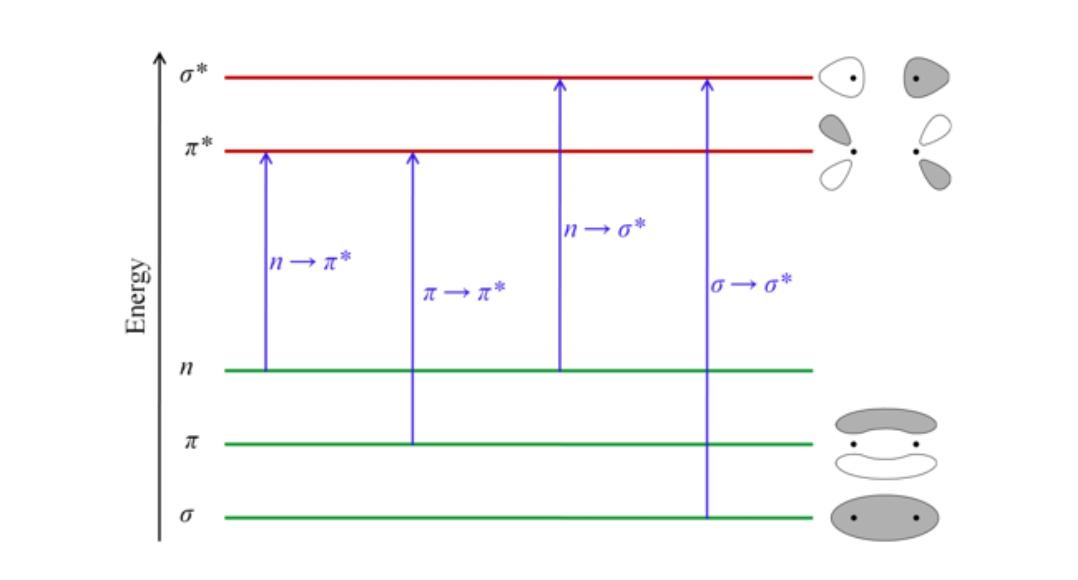 We have already discussed the Beer-Lambert Law. From Beer-Lambert Law it can be said that greater the number of molecules that can absorb light of a particular wavelength, the greater the light absorption. This forms the principle of the UV visible spectroscopy.

The optical absorption for Hexa thiobenzene acid is gleaned from the data obtained by UV-Visible Spectroscopy. We used dual beam UV-Vis spectrophotometer for our measurement of intensities. The working of dual beam UV-Vis spectrophotometer is already explained in brief in the previous section (Sec. 3.1.2). We used DMF as the solvent for Hexa thiobenzene acid. 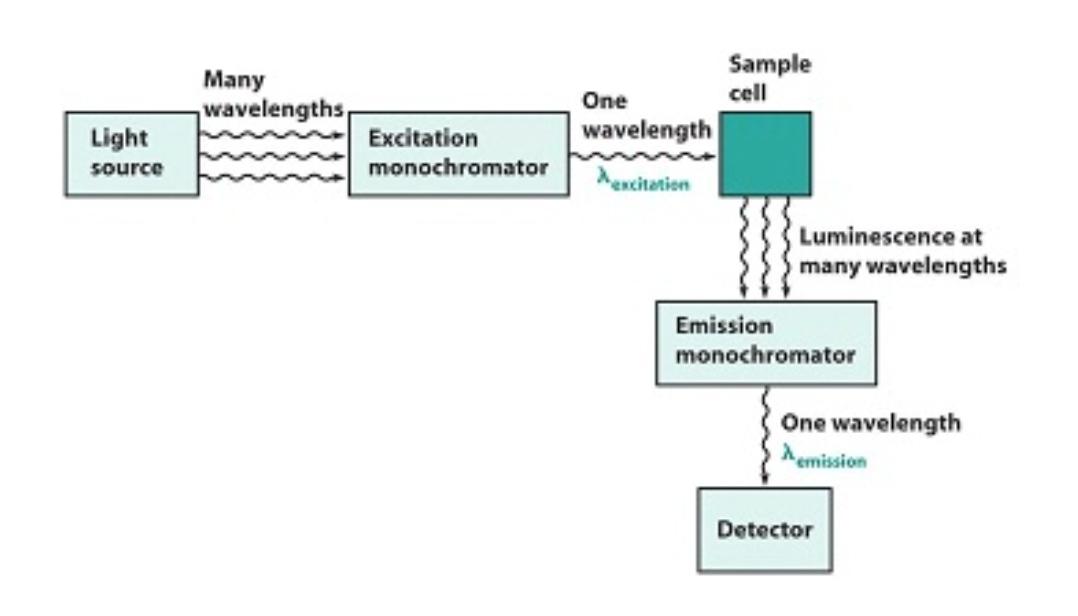 From the UV-Vis spectrophotomerty we obtained the ratio of the intesities of the emitted light and the incident light, which is called the transmittance, i.e.

And the absorbance can be obtained from this using the formula given as:

The Absorbance Vs. Wavelength graph obtained is as shown below: 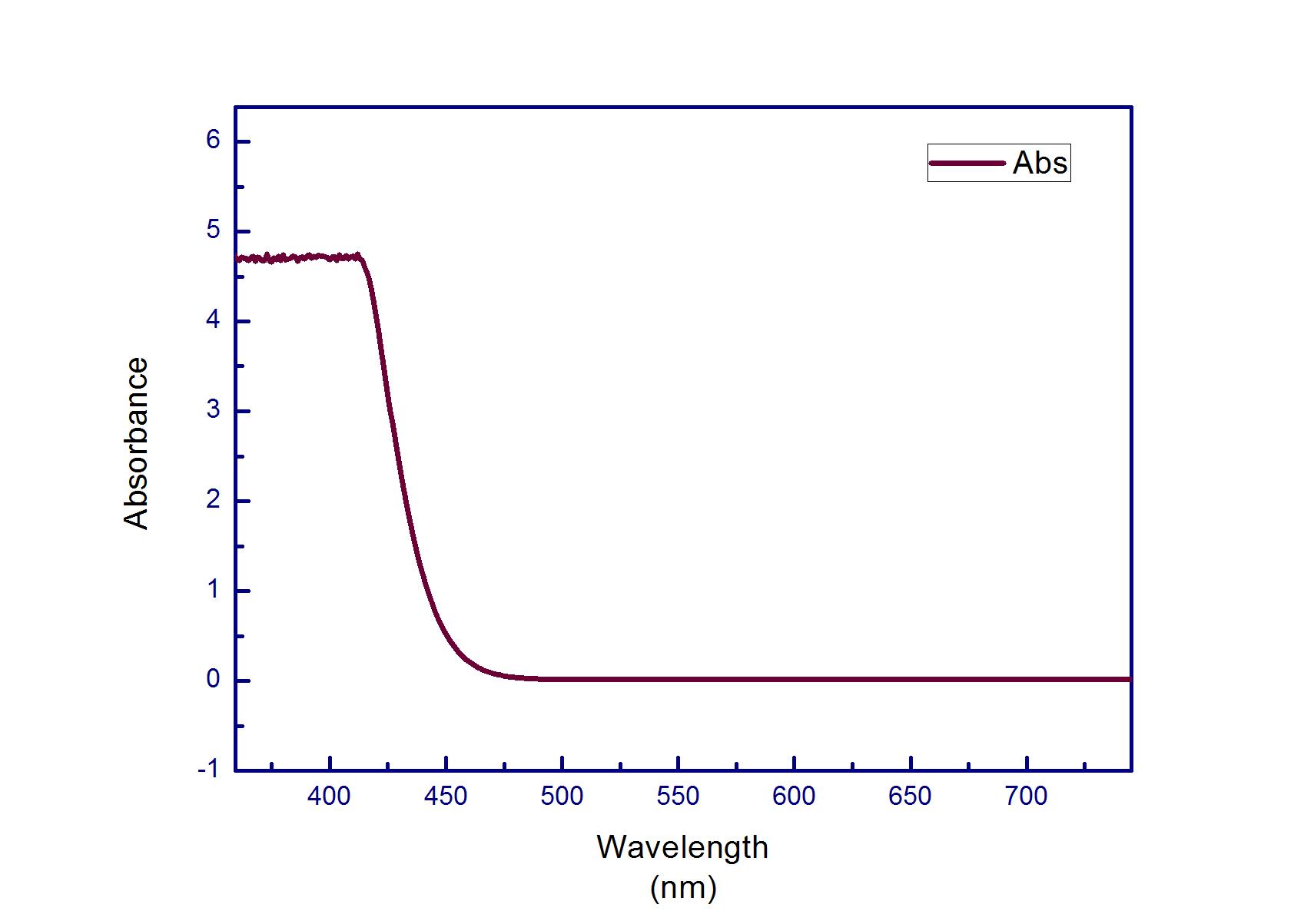 The maximum absorption corresponds to a wavelength value of about 416 nm. This wavelength is designated as .​.

To obtain the band gap from the UV-Vis spectroscopy we take the help of the Tauc relation, which is given as:

It is seen that at (Ahν)1/2= 0 the curve cuts the energy axis at 2.7 eV (as shown by the blue line). This value of energy corresponds to the band gap of Hexa thiobenzene acid.

The excitation spectrum shows at what wavelengths the solutin uses to produce fluoroscence. The excitation curve obtained by using the PL spectroscopy data is shown below: 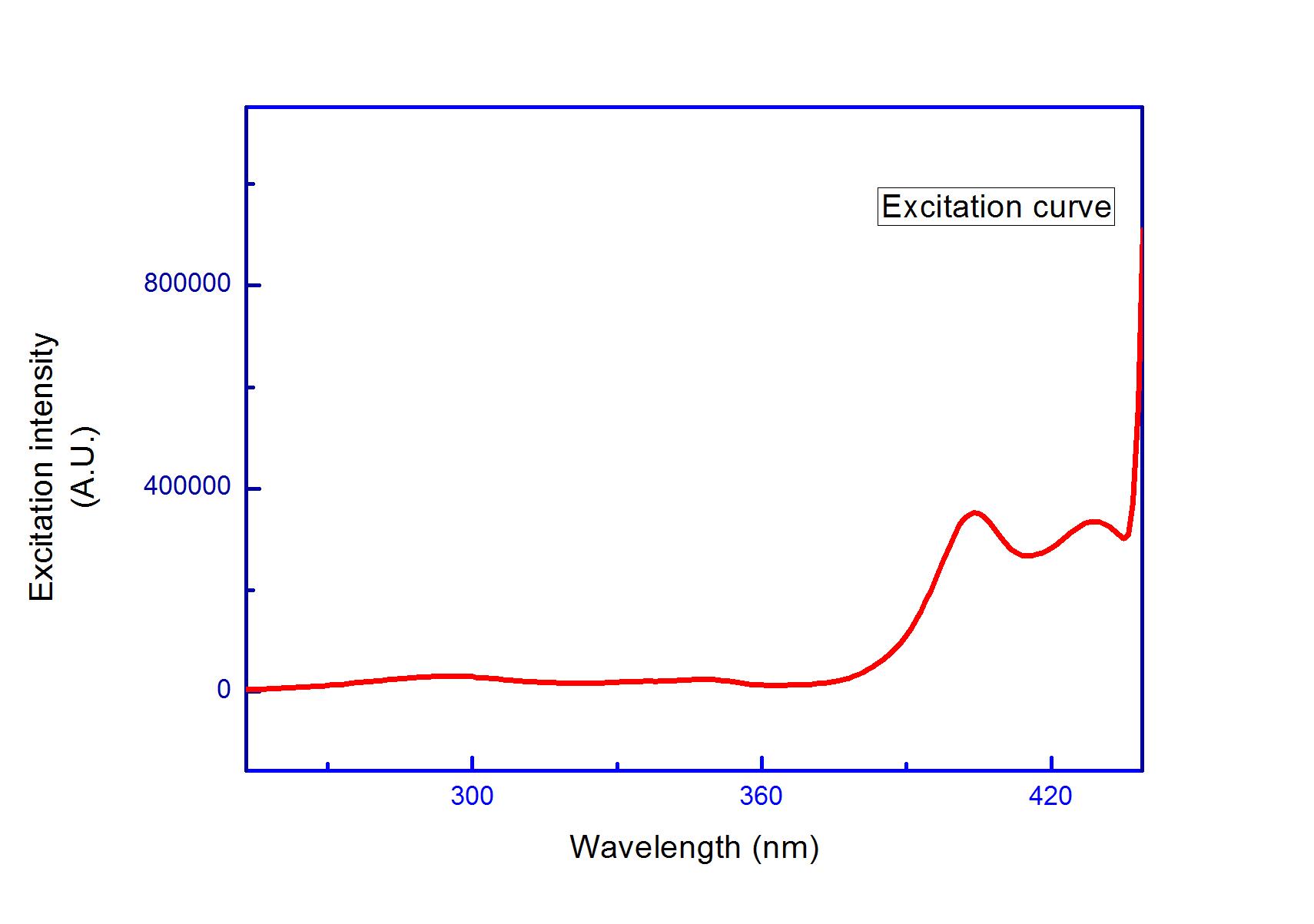 It can be seen clearly from the above graph that the maximum excitation intensity corresponds to a wavelength value of 404 nm. This wavelength inturn gives the energy band gap which is obtained to be 3.07 eV.

The emission spectrum shows what wavelengths are given off by the solution. The emission curve obtained from recorded data is as follows: 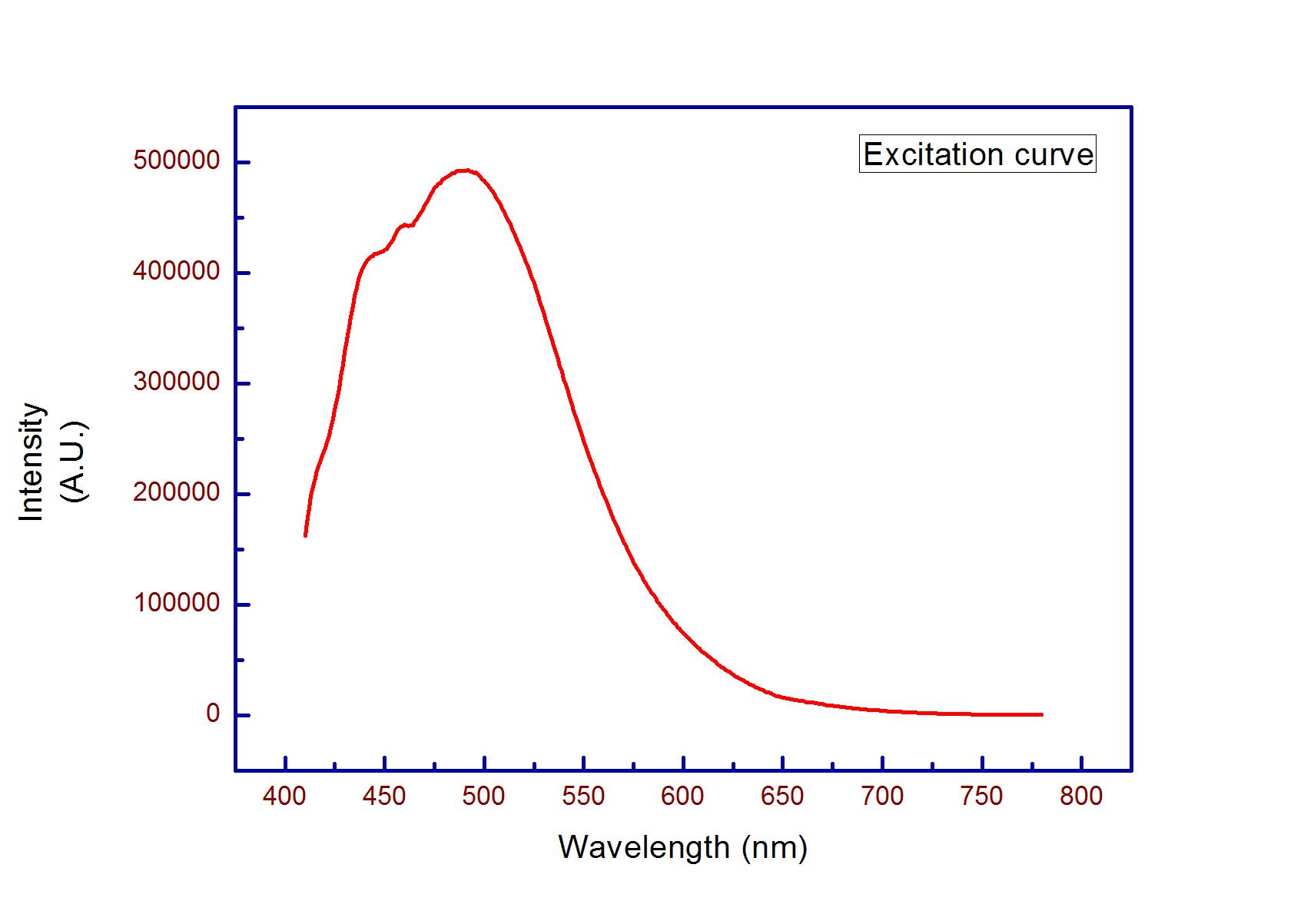 An excitation spectrum looks similar to an absorption spectrum. The greater the absorbance at the excitation wavelength, the higher the number of molecules promoted to the excited state and accordingly more emission will be observed. 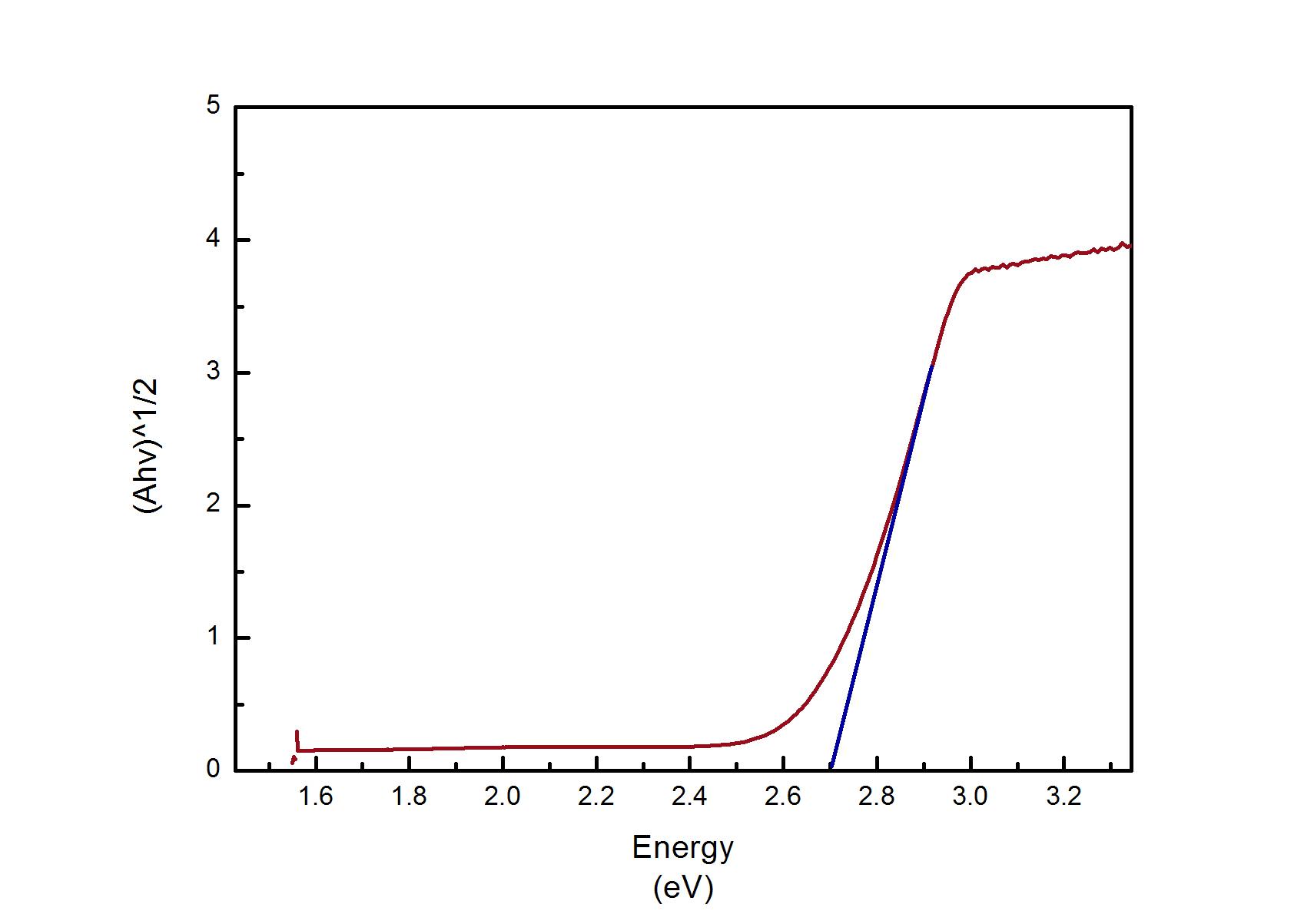 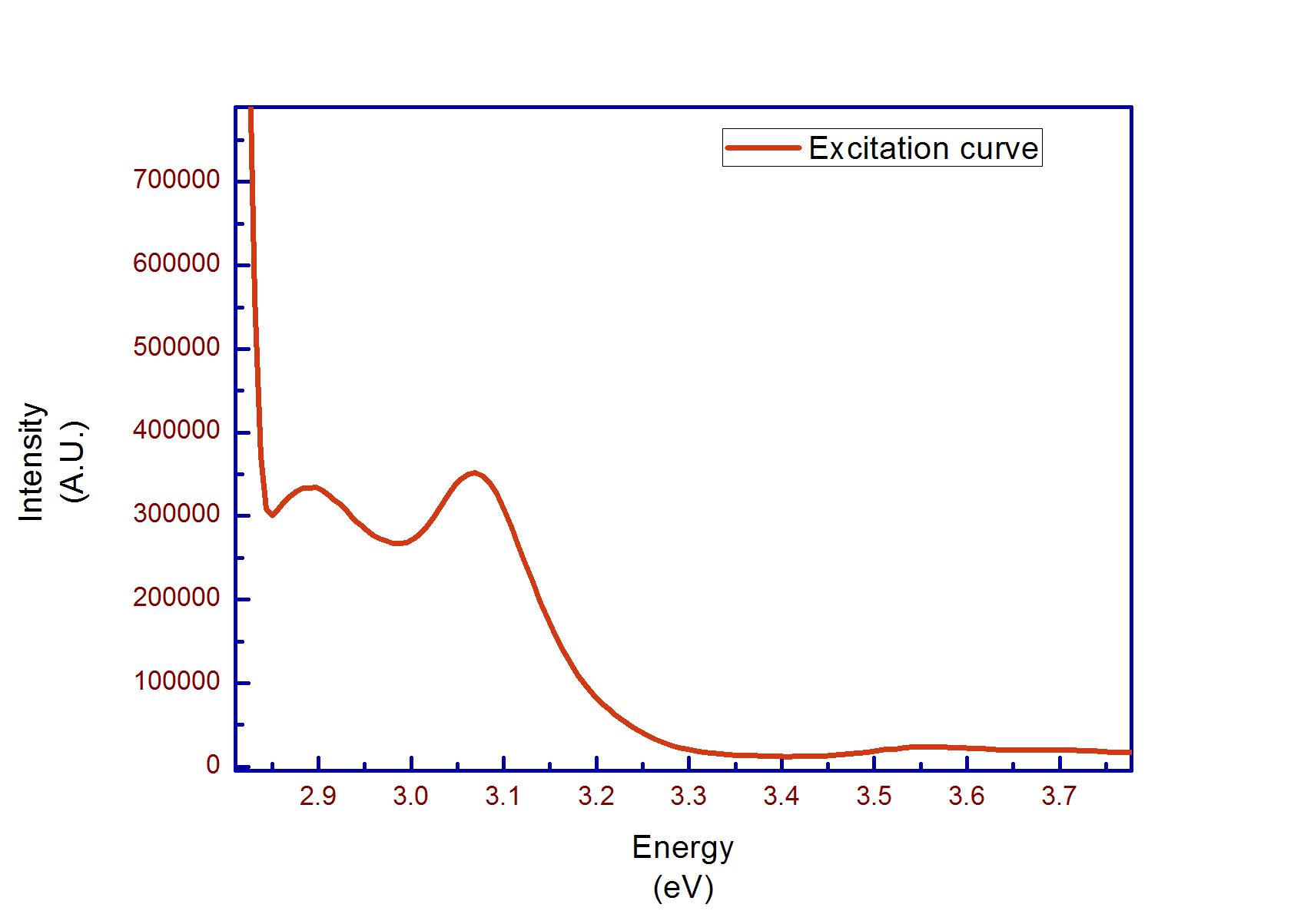 We have obtained energy band gap from both UV-Vis spectroscopy and Photoluminescence as shown above (Fig.11).

From the tauc plot, the band gap is obtained to be 2.7 eV. On the other-hand the excitation curve obtained by photospectroscopy gives the band gap to be 3.07 eV. This difference in band gaps is resulted because of the red shift in the wavelength in the later case. This is due to the presence of trap state, to which non-radiative decay of the photon occurs.

Under this project work we obtained the optical absorption for Hexa thiobenzene acid using dual beam ultraviolet-visible spectroscopy (UV-Vis spectroscopy). From the recorded data we plot the graph between absorbance and wavelength and also the tauc plot. The tauc plot gives the band gap of Hexa thiobenzene acid to be 2.7 eV. Then we performed photoluminescence spectroscopy of the same material. From the excitation curve we obtained the band gap to be 2.52 eV. The difference in band gaps is due to the nonradiative recombination of carriers during the photoluminescence.

I am indebted to the Indian Academy of Sciences for selecting me under the Summer Research Fellowship Programme.

I owe my sincere thanks and deepest sense of gratitude to my guide Prof. Kumaran Nair Valsala Devi Adarsh for all his guidance and motivation through out the internship period . I would like to extend my heartiest gratitude to the research scholars of our lab Mr. Dipendranath Mandal , Dr. Rajesh Kumar Yadav , Mr. Anirban Mandal and Ms. Riyanka Karmakar for their help and guidance . Heartfelt gratitute to IISER,Bhopal for making the internship period fruitful and enjoyable.

I would like to thank Prasad Basu Sir from the Dept. of Physics,Cotton University for his valuable recommandation.

I would take this opportunity to thank my fellow intern and friend Pratyush Pratim Das for his cooperation and constant support.

I would also like to convey my gratitude to AuthorCafe for providing such a wonderful platform for writing my report.

Last but not the least, I am deeply obliged to my parents and friends for all their love, care and support.