The consecutive photo excitation of perylene diimide (PDI) produces the excited doublet state of its radical anion (PDI˙−*), which is demonstrated to be a strong photoreductant for difficult-to-reduce substrates, such as aryl halides. In this report we attempt to analyse the bay substitution effect on the PDI scaffold and its efficiency in the reduction of aryl halide moieties using the principle of consecutive photoinduced electron transfer (conPET) process. The substitution of four bromine atoms on the PDI core will reduce the reduction potential and thus enhance the ease of formation of stable radical anions by photoirradiation. Study is also extended to the iodination of the 1,6,7,12-Tetrabromoperylene-3,4,9,10-tetracarboxylic diimide by halogen exchange reaction to 1,6,7,12-Tetraiodoperylene-3,4,9,10-tetracarboxylic diimide which is expected to further reduce the reduction potential and is expected to enhance the efficiency of reduction of aryl halide moieties than that of tetrabrominated PDI. Attempts were also done in synthesizing PDI cyclophanes to analyse its efficiency towards reduction of aryl halides.

A recent application is the generation of highly reactive aryl radicals, which are useful arylating reagents in synthesis, by photoinduced electron transfer (PET) from photoredox catalysts to suitable precursors followed by bond scission. However, the choice of aryl radical precursors is currently limited to electron-poor arenes, such as diazonium or iodonium salts, or in a few cases aryl iodides with weakly bound leaving groups, due to the accessible reducing power of typical visible light photoredox catalysts. The energy conferred by visible light excitation for subsequent reduction chemistry is limited by the energy of a single absorbed photon. The energy of blue photons (440 nm) of 270 KJ/mol or 2.8 eV defines a maximum theoretical energy threshold between the donor (i.e., photocatalyst) and acceptor (i.e., substrate). In addition, part of the accessible energy is always lost due to intersystem crossing and reorganization of the excited states of the photocatalysts by nonradiative pathways. The limitations of visible light–mediated chemical photocatalysis can be overcome by using the energies of two photons in one catalytic cycle. The excited dye becomes a stronger oxidant (and reductant) and is converted into its radical anion. However, compounds that are less reactive (e.g., aryl bromides and chlorides) due to a more negative reduction potential, higher carbon-halide bond dissociation energy, and a different, stepwise cleavage mechanism are not accessible by this process using typical photocatalysts and, more importantly, visible light. The energy of a second visible light excitation can be added to the process if the radical anion of the dye is reasonably stable in the ground state, colored, and thus can be excited again by visible light.

Perylene diimides—a class of fluorescent dye molecules2 that have been used as pigments, colorants, photoreceptors, and more recently, as electronic materials because of their characteristic combination of thermal and photostability and optical and redox properties—fulfill the requirements of such a biomimetic organic dye–based catalytic system. Halogenation of PDIs offers a great platform to tune these properties and to explore new reactions. PDIs are a good candidate as acceptor materials due to their high electron affinity and high electron mobilities. The large surface area of the π-system of PDIs is also responsible for an efficient aggregation of these compounds via π-π stacking, the extent of which can be modulated to some degree by controlling the twisting of the aromatic core caused by the substituents at the so-called bay (or 1,6,7,12 ) positions. The unique self-assembly properties and the intrinsic chirality of this type of compounds recently have been elegantly explored in supramolecular chemistry and anion-π catalysis. The HOMO/LUMO levels of perylene diimide derivatives can easily be tuned via substitution at the bay position. PDIs are easily reduced through a mild photoinduced electron transfer process to its stable and coloured radical anion PDI·¯* with a reduction potential of around 0.43 vs SCE. Excited doublet states (PDI·¯*) are strong photoreductants for difficult to reduce substrates, such as inert aryl halides (a reduction potential of ca. 1.5-2.0 V) which are produced by subsequent photoexcitation of PDI even by visible or near infrared light. This consecutive photoinduced electron-transfer (conPET) process overcomes the current limitation of visible light photoredox catalysis and thus allows phocatalytic conversion of less active chemical bonds in organic synthesis. Upon irradiation with blue light (455 nm) in the presence of triethylamine (Et3N) as electron donor, PDI forms a colored radical anion PDI•–* and that can again be excited by visible light. In the absence of oxygen, the radical anion is very stable. Spectroscopic investigations confirmed that electron transfer from Et3N to PDI requires photoexcitation. 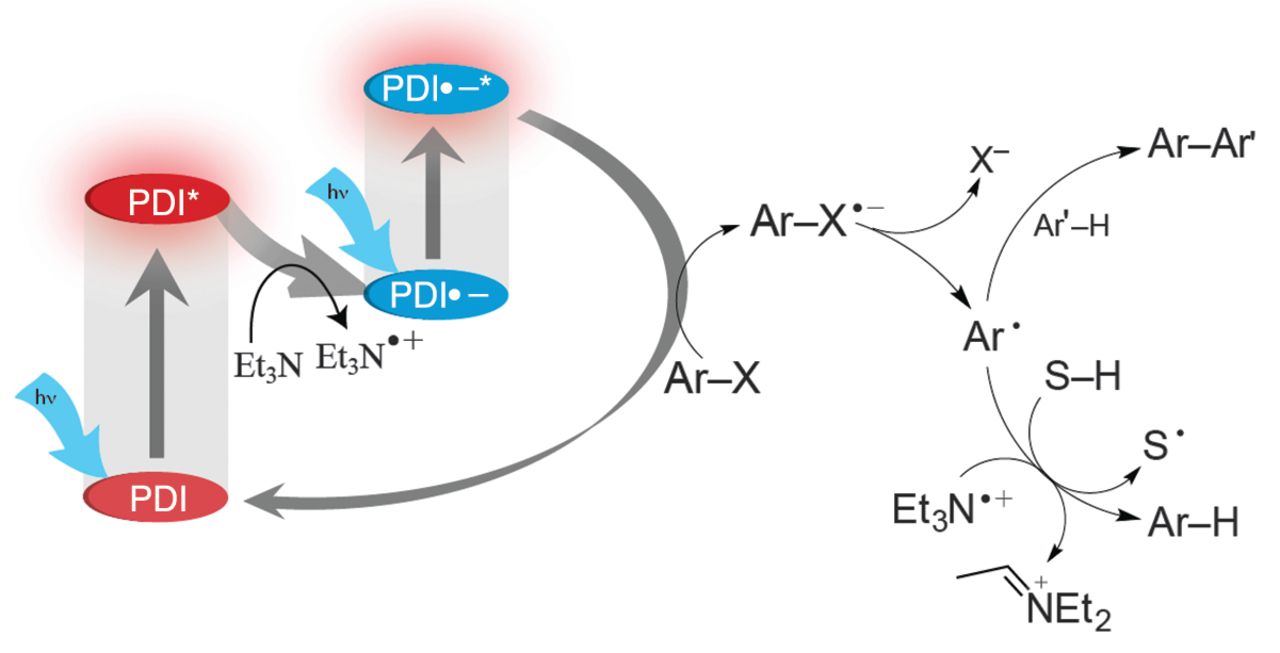 Considering the fact that the functional groups at bay positions govern the optical and electronic properties of PDIs, we set out to investigate the effect of tetrahalogenation on the PDI scaffold and its efficiency in the reduction of aryl halide moieties using the principle of conPET reaction. The substitution of halogen atoms on the PDI core will further reduce the reduction potential and thus enhance the ease of formation of stable radical anions by photo irradiation. Additionally, we tried the synthesis of PDI cyclophanes to analyse its efficiency towards the reduction of aryl halides.

Objective of the Research 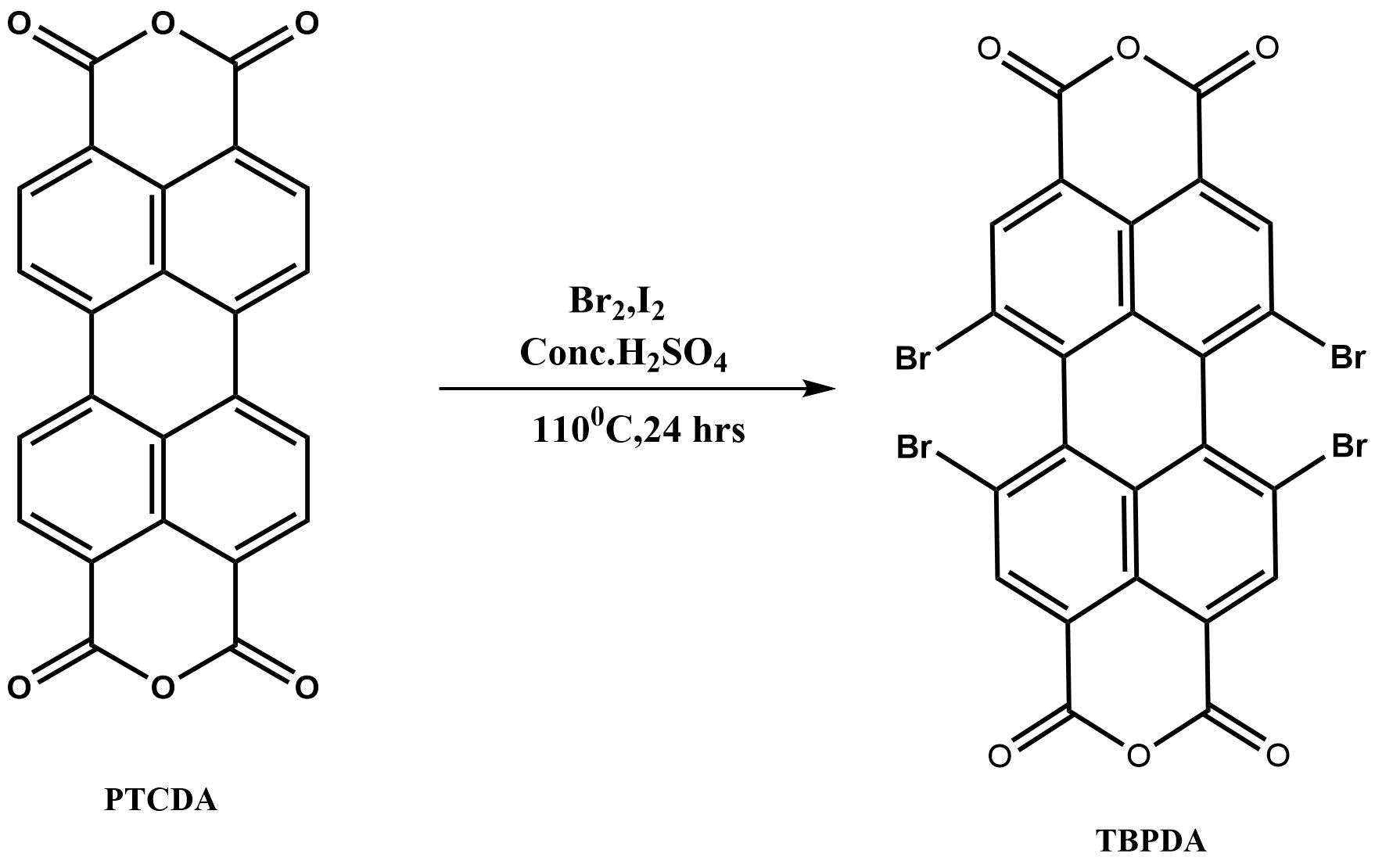 4 g (10 mmol,1 eq) of perylene-3,4,9,10-tetracarboxylic dianhydride (PTCDA) was stirred with 80 mL of concentrated sulphuric acid for 6 hours. 100 mg of elemental iodine was added and the reaction mixture was heated to 110°C. 2.3 Ml (44 mmol,4.4 eq) of elemental bromine was added drop wise to synthesise tetra bromo PTCDA. The reaction mixture was refluxed for 24 hours. After 24 hours, the product was precipitated by pouring the reaction mixture into 200 mL of crushed ice. The product (PTCDA-Br4) was filtered and dried in hot air oven. Owing to the insolubility of the compounds, they were taken for next step of synthesis without any characterisation. 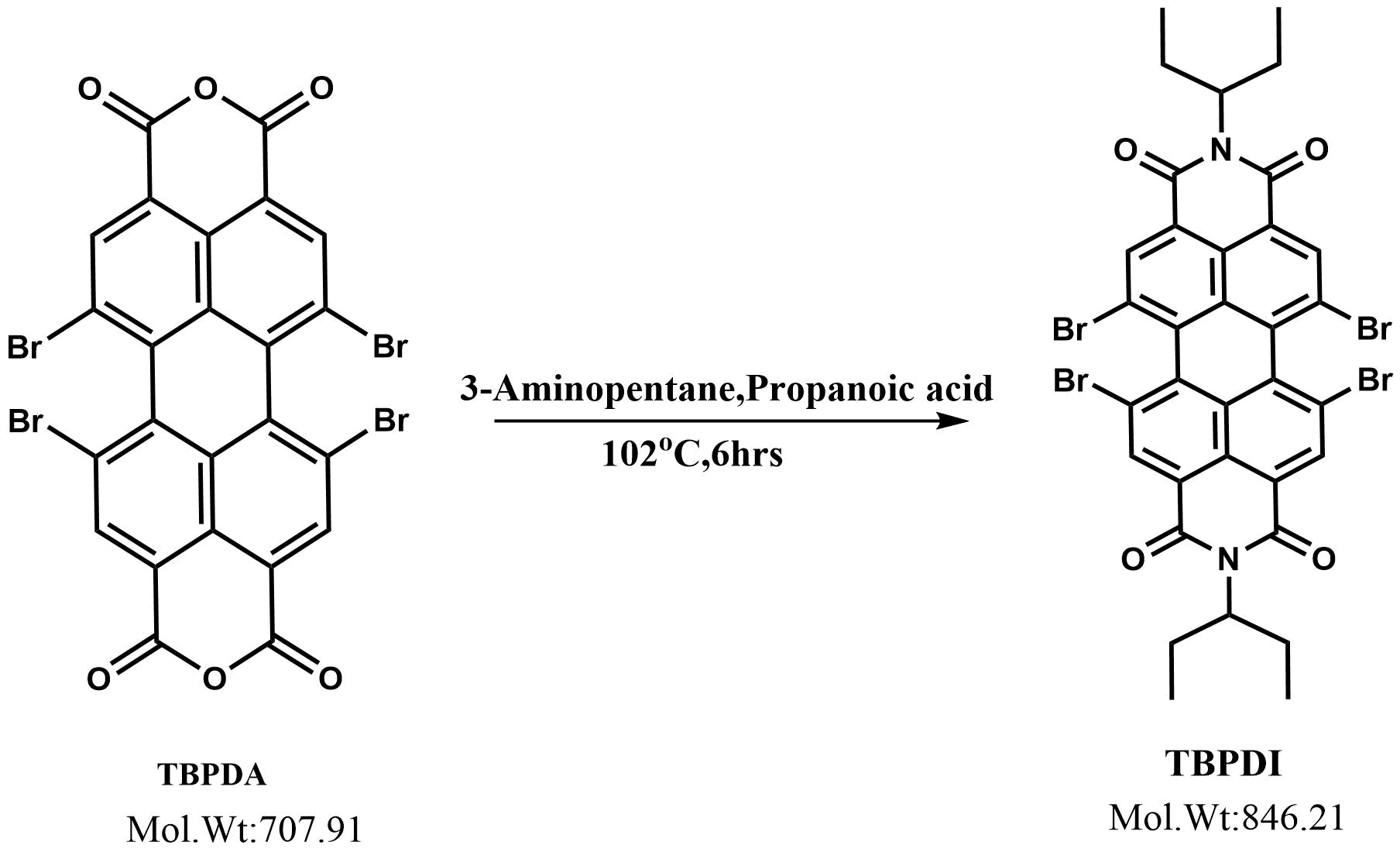 1g (0.0014moles,1 eq) of PTCDA-Br4 was taken in 20 mL propanoic acid and stirred for 30 minutes. 1ml (0.0084moles,6 eq) of 3-aminopentane was added dropwise into the reaction mixture at 50°C. The reaction mixture was refluxed at 102 °C for 6 hours. After 6 hours, the reaction mixture was quenched by using NaHCO3 and water. The solvent was removed under reduced pressure and product was dried in hot air oven. The final product PDI-Br4 were purified by column chromatography on silica gel with DCM and pet ether as the elutent. 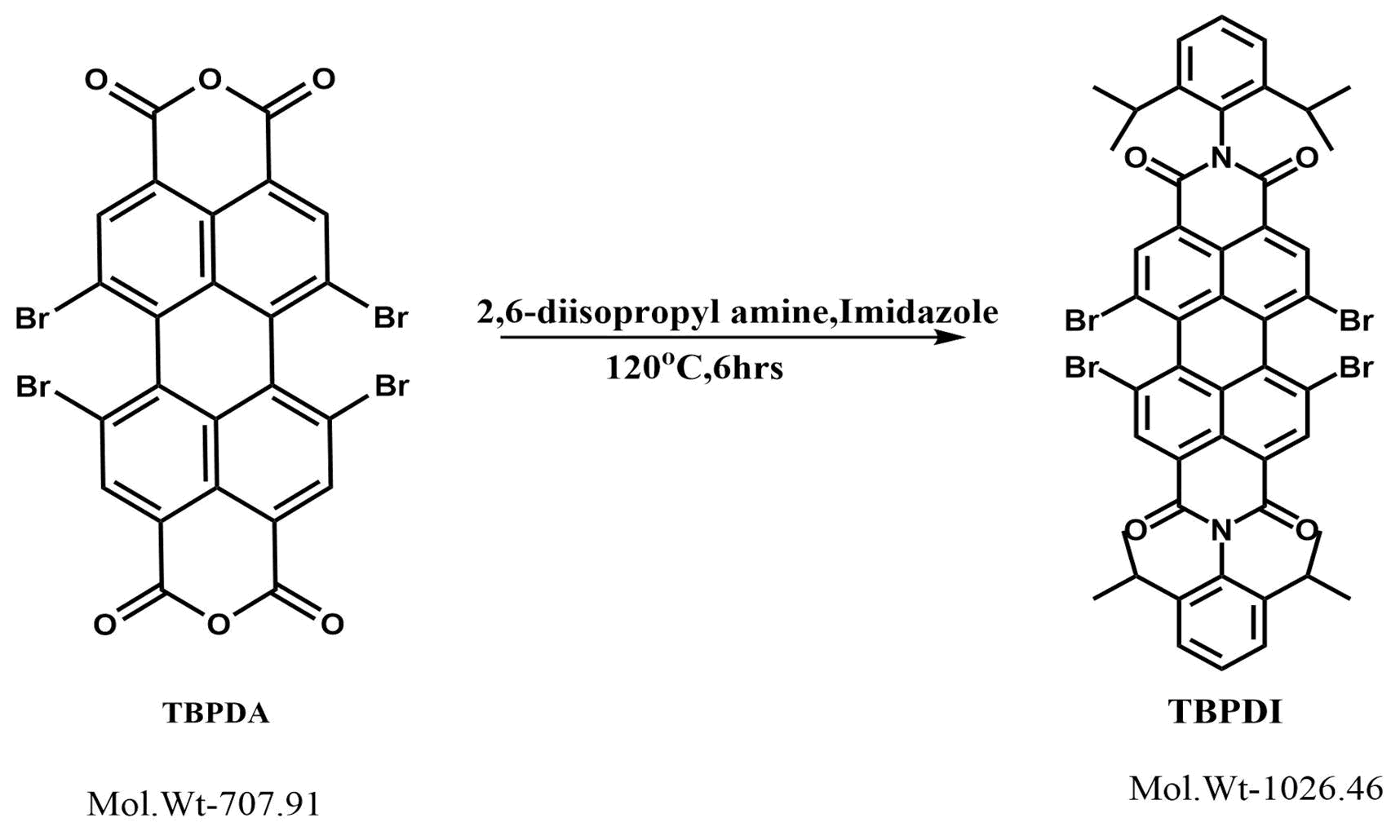 1g (0.0014moles,1 eq) of PTCDA-Br4 was taken in 20 mL propanoic acid and stirred for 30 minutes. 1.5ml (0.0084moles,6 eq) of 2,6-diisopropyl amine was added dropwise into the reaction mixture at 50°C. The reaction mixture was refluxed at 102°C for 6 hours. After 6 hours, the reaction mixture was quenched by using NaHCO3 and water. The solvent was removed under reduced pressure and product was dried in hot air oven. The final product PDI-Br4 were purified by column chromatography on silica gel with DCM and pet ether as the elutent. 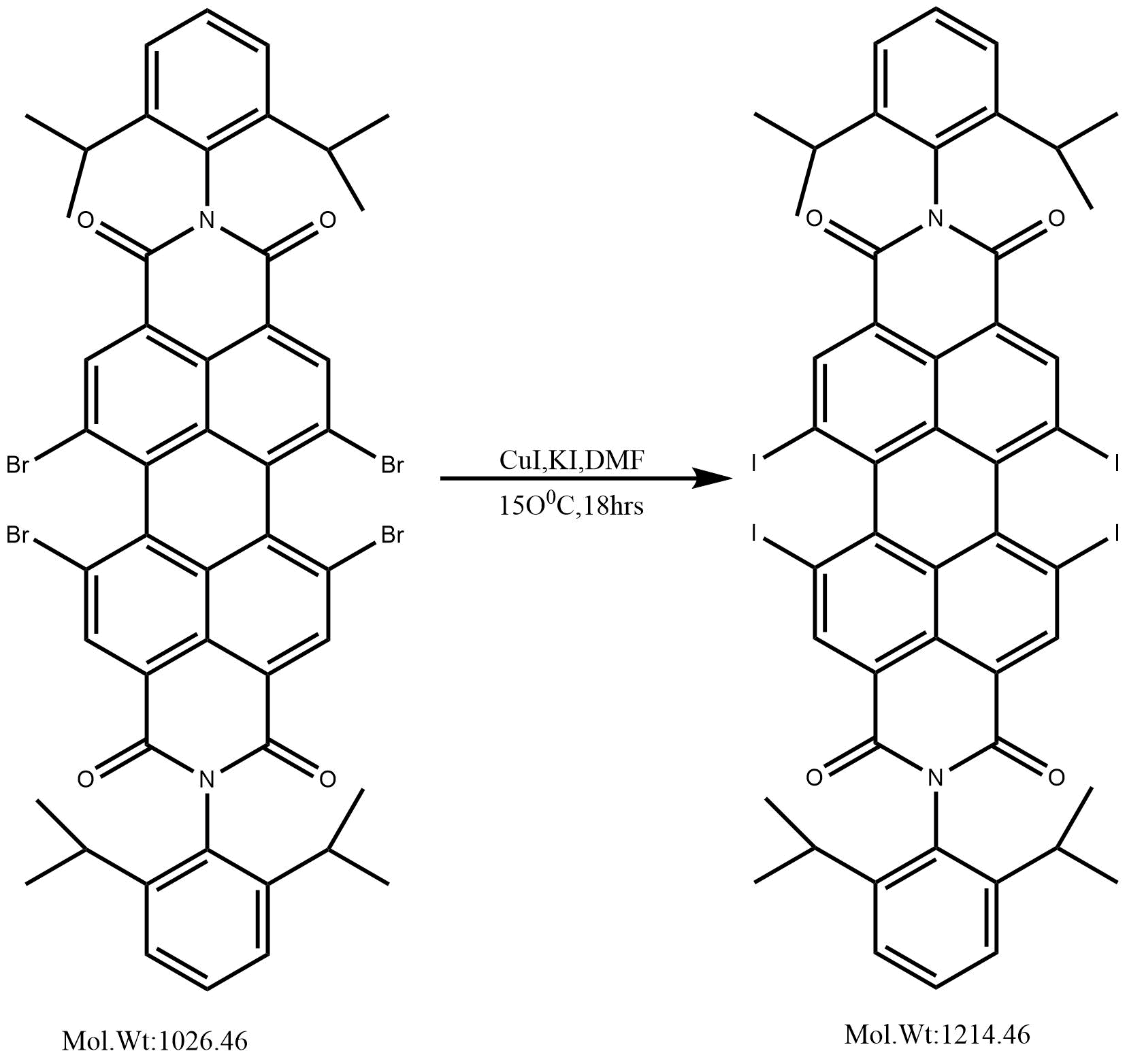 40 mg (0.04mmol,1 eq) of PDI-Br4 was refluxed under inert nitrogen atmosphere for 18 hours with 77mg (0.47mmol, 12 equiv.) of KI and 74mg (0.39mmol, 10 equiv.) of CuI in 10mL of DMF. Then, the reaction mixture was cooled, poured into a separatory funnel and organic layer was extracted with DCM. The organic solvent was evaporated under reduced pressure and the crude product was purified by column chromatography using PET Ether/ DCM to afford as pink coloured solid.

General Procedure: In a 10mL snap vial, 10 mg (0.05 mmol, 1 equiv.) of the respective aryl halides and PDI- Br4 (0.0025 mmol, 0.05 equiv.) were dissolved. The resulting mixture was deoxidized by using an inert nitrogen atmosphere for 20 minutes. Et3N (0.40 mmol, 8 equiv.) was added under inert nitrogen atmosphere, and the resulting mixture was further degassed. Then it was irradiated through plane bottom side of the snap vial using LEDs of 419 nm. The reaction progress was monitored by LRMS. 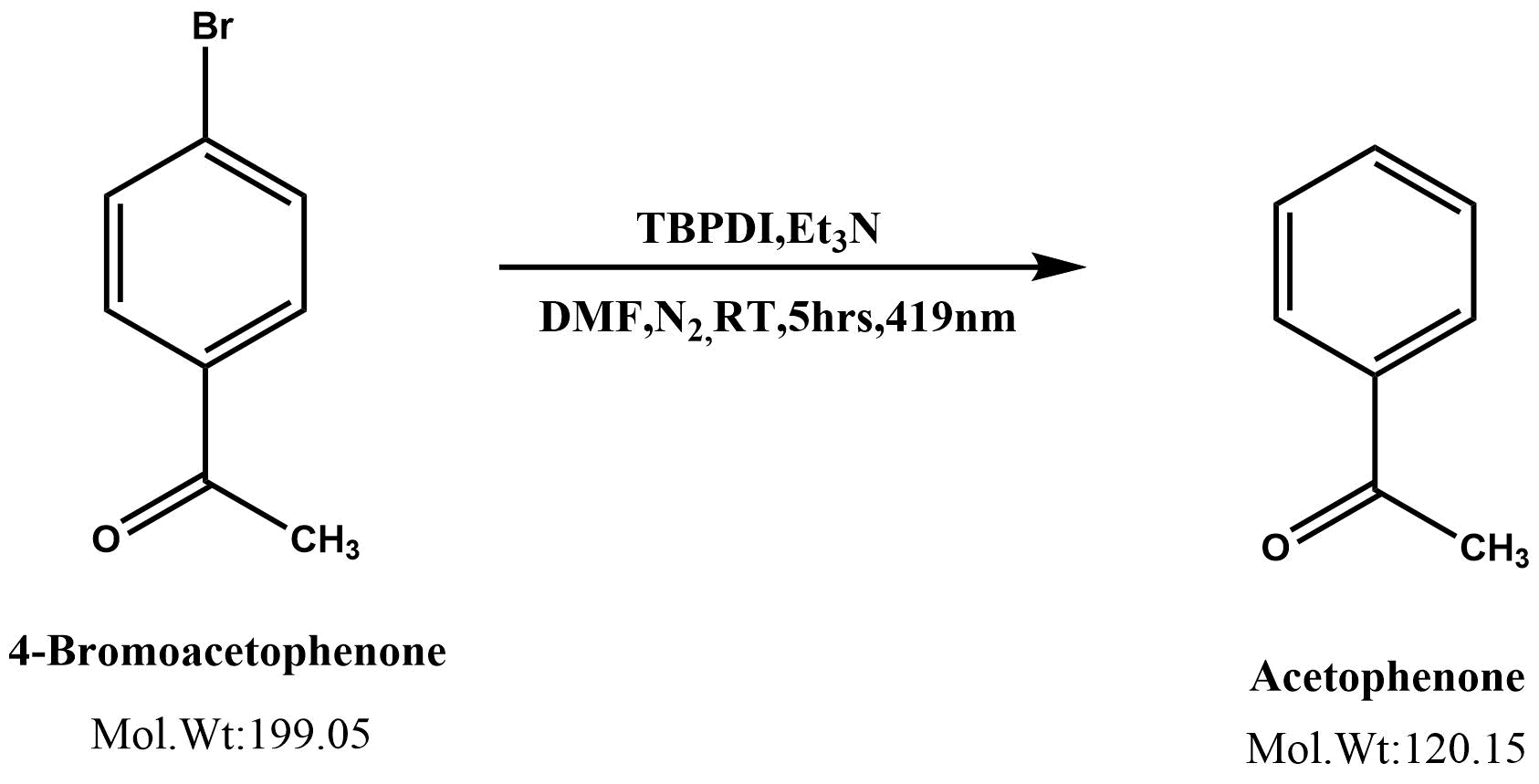 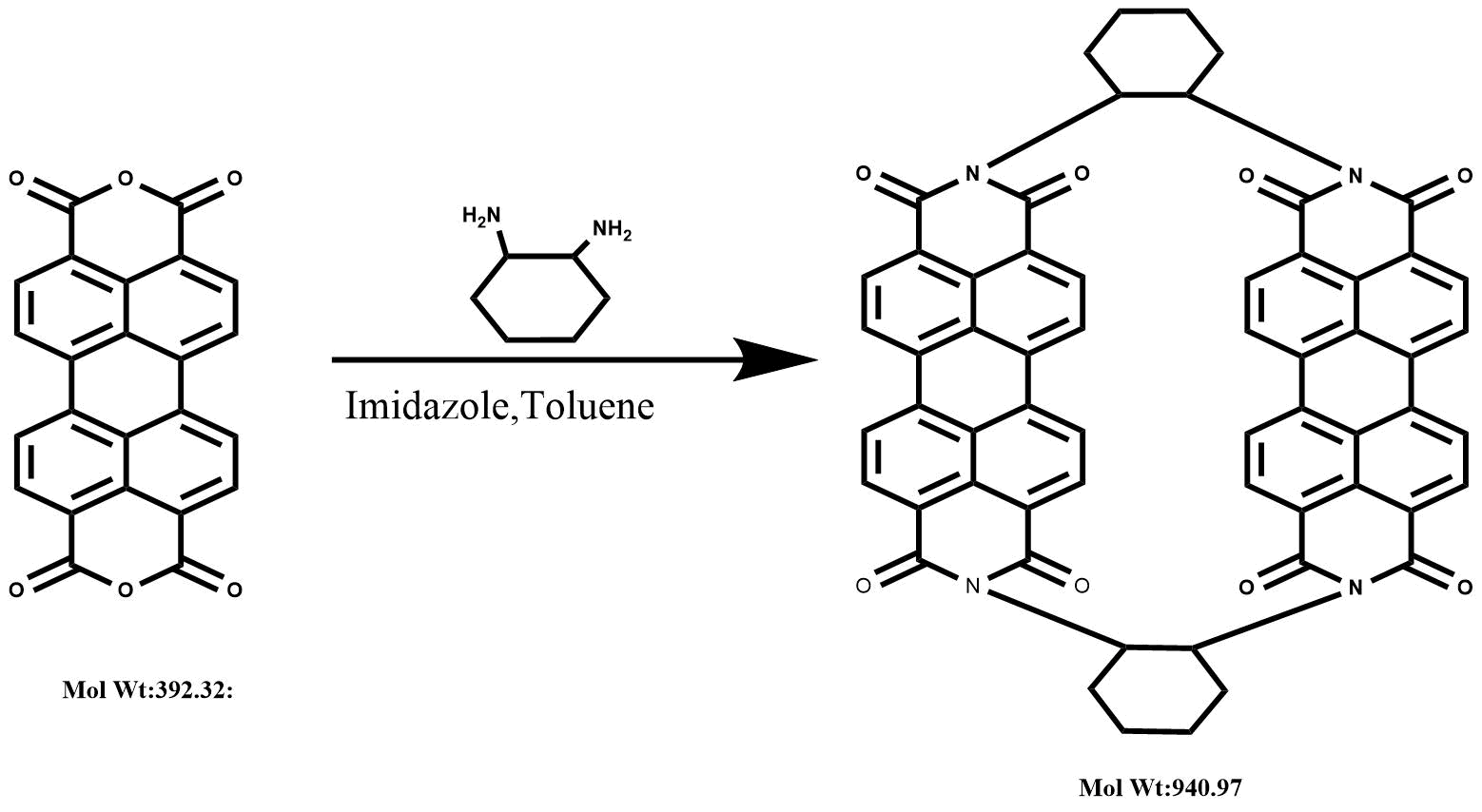 A mixture of perylene-3,4:9,10-tetracarboxylic dianhydride (150 mg,0.3823 mmol), imidazole (8 g), and 1,2-cyclohexanediamine ( 44 mg, 0.3823 mmol) in toluene (350 mL) was heated to reflux under a nitrogen atmosphere and kept at reflux for 48 h. The solvent was removed under reduced pressure and the residue was washed with dilute hydrochloric acid (1N, 50 mL) and then ethanol. The product was purified by column chromatography on silica gel with dichloromethane and methanol as eluent. After recrystallization from chloroform and methanol, the product was collected as a red solid

1. The red solid obtained after separation by column chromatography is then characterized using H1 NMR and MALDI -TOF. 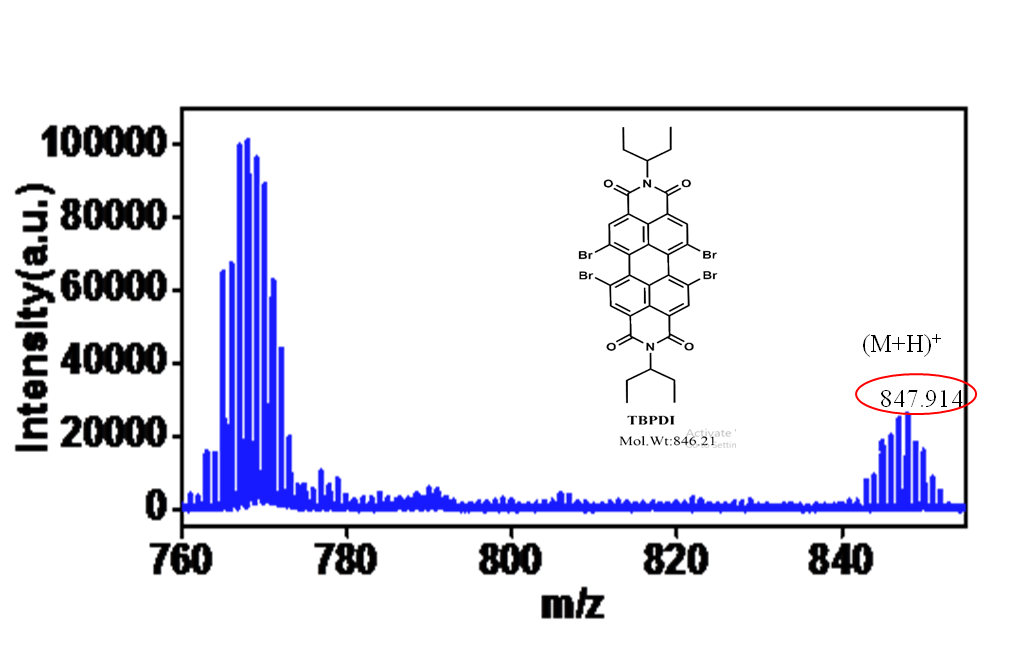 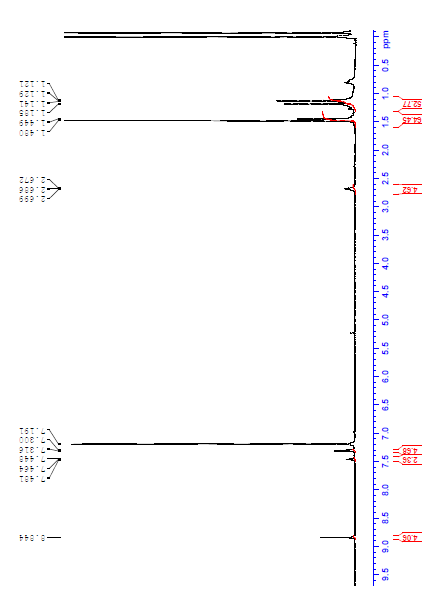 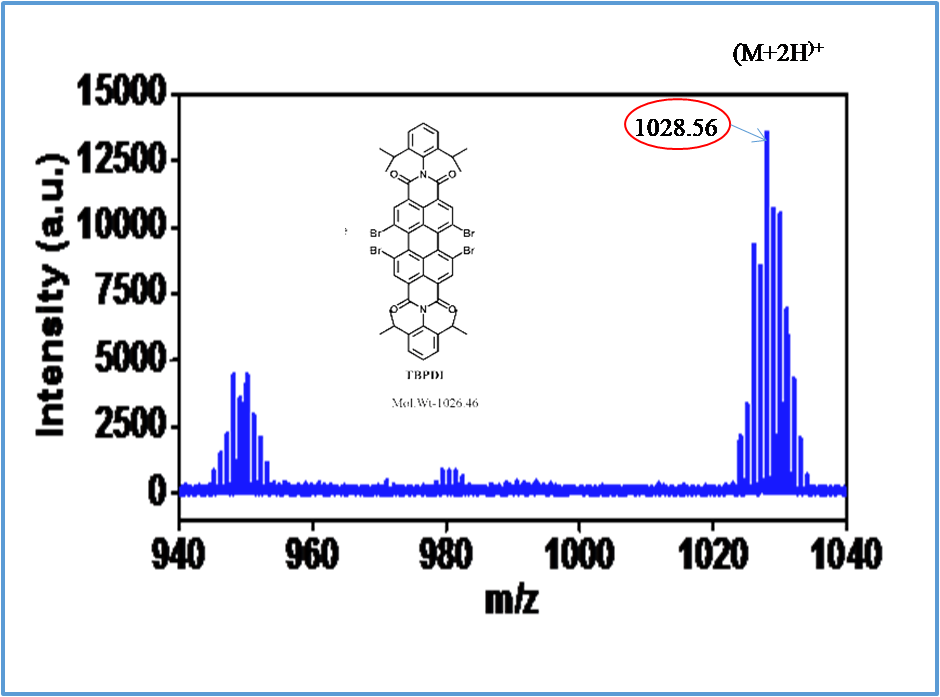 2. The dark red solid obtained after separation by column chromatography is then characterized using MALDI -TOF. 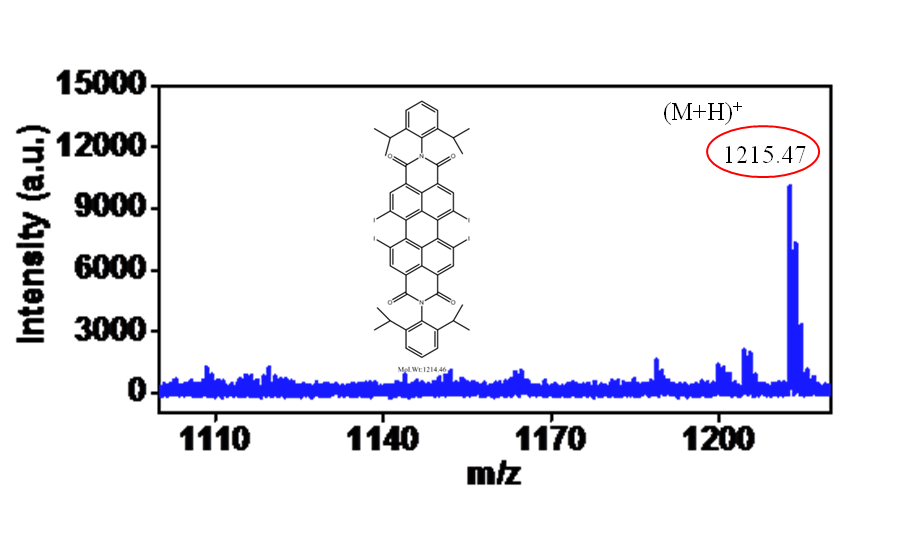 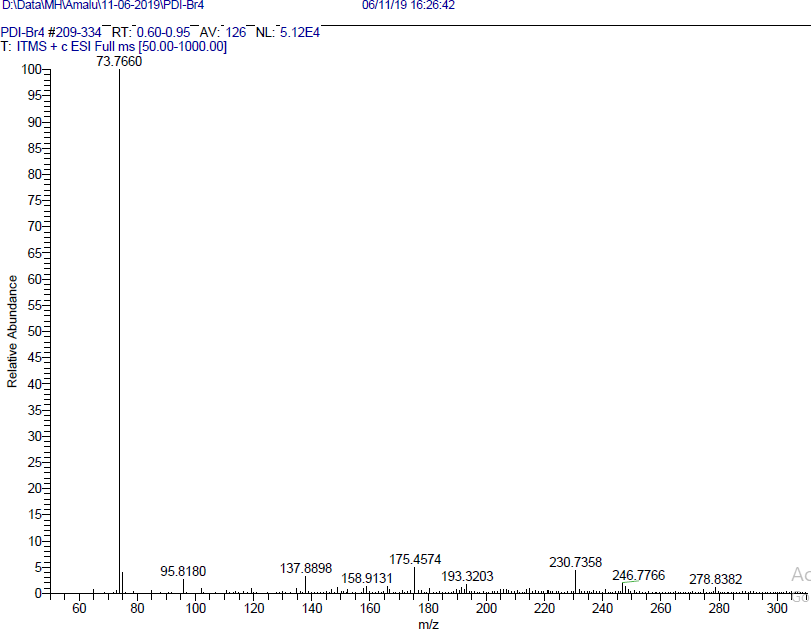 The expected peak in LRMS spectrum is at m/z =120 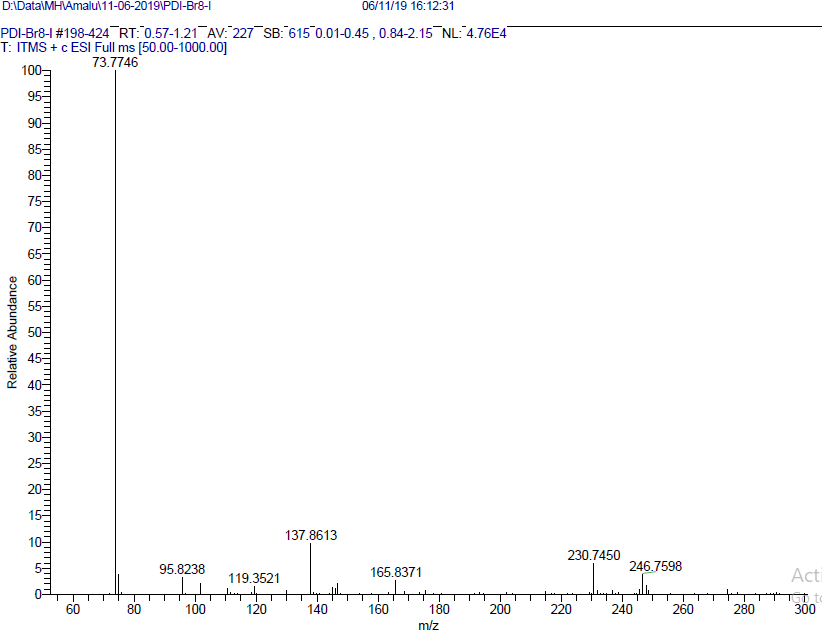 The expected peak in LRMS spectrum at m/z =128.

The red solid obtained after separation by column chromatography is then characterized using MALDI -TOF. 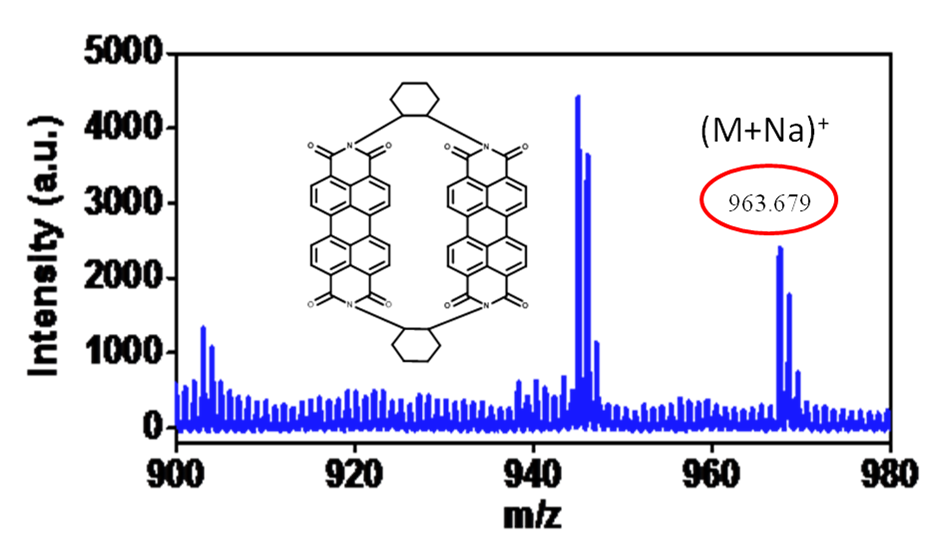 PDI-Br4 was synthesised and characterized using spectroscopic (NMR, MALDI-TOF) techniques. We also tried thehalogen exchange reaction of PDI-Br4 to yield PDI-I4. Photo reduction experiments were carried out in the selected aryl halides using the PDI-Br4 derivatives. Initial attempts in the photoreduction experiments using light source having wavelength of 419 nm failed to give the reduced product. The project was also expanded in synthesising PDI cyclophanes which is expected to further enhance the dehalogenation of aryl halides. PDI cyclophane was synthesized and purified and primary characterization using MALDI-TOF analysis indicated the product formation. Further characterization of the obtained producst and optimization of the reactions are under progress.

In the course of my project work, I have been helped by a number of people either directly or indirectly for the successful completion. First of all, I record profound gratitude and indebtedness to Dr. Mahesh Hariharan for his valuable guidance and wholehearted cooperation during each stage of my work.

I am deeply indebted to my co-guide Ms. Amalu Mohan for her constant support and encouragement without which this project would not be possible.

I also take this opportunity to express gratitude to the lab members Ms. Athira T John, Ms Lijina M.P, Ms Remya Ramakrishnan and Ms. Devika Sasikumar for helping me during the course of my work.

I would like to thank Indian Academy of Sciences for giving me this opportunity.

And the last but not the least, I thank my family and all my friends for their constant encouragement in pursuing this research work.