Organometallic chemistry combines the aspects of inorganic chemistry and organic chemistry. On the other hand, metallaboranes are hybrid cluster systems that join polyhedral boranes with transition metal clusters. It was developed as a variation of metal ligand coordination chemistry, analogous to organometallic chemistry. These clusters are synthesized either through thermolysis or by simple metathesis reactions between preformed polyborane anions such as NaB3H8, NaB5H9, etc and transition metal halides. Boranes are compounds of boron with hydrogen. It is very unstable and highly reactive. It is so reactive, that it reacts with itself to form B2H6 and its homologous series (BnH3n). These hydrides are also called boranes and have polygonal structure with very unique and complex bonding type. These polygonal structures are also known as borane cage. One of the bonds in this cage like structure is B-H-B bond which is also called three centred two electron bond and hydrogen atom in this bond is called bridging hydrogen. When metals are incorporated into these polygonal cages of boranes by replacing bridging hydrogen atoms, metallaboranes are formed.

Metallaboranes are true hybrid cluster systems that empirically join the polyhedral boranes with transition metal clusters. Although metallaborane chemistry, and metallocarborane chemistry, initially developed as a variation of metal-ligand coordination chemistry analogous to organometallic chemistry, it was the cluster electron counting rules and the associated isolobal principle that revealed interconnections between ostensibly unrelated molecules and defined the scope of the area. The subsequent synthetic developments, both rationalized and stimulated by these ideas, provide a convincing verification of the intrinsic chemical truths expressed by these rules. The variability in the isolobal behaviour of a given metal fragment makes the chemistry associated with metallaboranes considerably richer than that of pure boranes or pure metal clusters of the same dimension. Consequently, metallaboranes require careful analysis of the connection between geometry and electronic structure. In this regard, the emerging metallaborane chemistry of the early transition metals provides interesting variations on the theme of cluster electron counting.

Metallaboranes that incorporate early transition metals are less explored area of cluster chemistry. The main challenge in this field is to find new synthetic routs. Especially, the chemistry of Group 5 transition metal boron complexes are of great deal of interest owing to their unusual bonding patterns, unique structures, and reactivity. Compared to Nb and Ta, examples of Vanadaboranes are rare and hence the synthesis of same is of high interest

Typically, products are isolated by chromatography from reaction mixtures in low yield. Only the most stable compound can be characterized and hence scope of the chemistry is highly restricted. Except for coordination complexes containing BH4-, B2H62- ligands, structurally authenticated compounds of Group 5 metals were confined to unsaturated tantallaborane. But later work done by Messerle and Wachter lead to the synthesis of tantallaboron [ (Cp*Ta)2(B2H6)2] and niobaborane [ (Cp+Nb)2(B2H6)2] respectively within good yields. Examples of vanadaboranes remained rare till synthesis of [(CpV)2(B2H6)2] was reported from the reaction of Cp2VCl2 with LiBH4 and BH3.THF. Reactions with Cp2VCl2 is already well explored and a limited number of vanadaboranes like [(CpV)2(B2H6)2] and [(CpV)2(B5H6)11] are reported. These compounds are highly stable and forms in good yield under normal reaction conditions itself. But reactions with Cp*V chlorides are less explored. But the synthesis of (Cp*VCl2)3 reported long back as a puple colored air and moisture sensitive solid.

Here, I performed the basic techniques like handling of air and moisture sensitive chemicals, usage of glove box, loading reactions at low as well as high temperature conditions, under inert atmosphere (argon atmosphere) in Schlenk tubes, as well as in sealed tube, monitoring reaction progress and isolation of pure products using Thin Layer Chromatography (TLC) technique. The obtained products are then carefully studied by using NMR (Nuclear Magnetic Resonance), IR spectroscopy and mass spectrometry. Then we performed the common crystallization methods used in this lab.

The reactions are very sensitive, hence performed carefully under argon atmosphere in Schlenk tubes as well as in sealed tubes. These reactions are performed for specific time period under some temperature conditions which are carefully monitored and the product formed are checked by TLC technique. These obtained products are then separated and purified by TLC loading and carefully analysed by techniques like NMR spectroscopy, IR spectroscopy, and mass spectrometry. Then the crystals were carefully kept for crystallisation in crystallisation Schlenk tubes. The crystals formed are undertaken x-ray diffraction to analyse the structure and bonding.

TLC is a type of planar chromatography. It is routinely used by researchers in the field of phyto-chemicals, biochemistry, and so forth, to identify the components in a compound mixture, like alkaloids, phospholipids, and amino acids. It is a semi quantitative method consisting of analysis. Similar to other chromatographic methods, thin layer chromatography is also based on the principle of separation. The separation depends on the relative affinity of compounds towards stationary and the mobile phase. The compounds under the influence of the mobile phase (driven by capillary action) travel over the surface of the stationary phase. During this movement, the compounds with higher affinity to stationary phase travel slowly while the others travel faster. Thus, separation of components in the mixture is achieved. Once separation occurs, the individual components are visualized as spots at a respective level of travel on the plate. Their nature or character are identified by means of suitable detection techniques.

NMR is an abbreviation for Nuclear Magnetic Resonance. An NMR instrument allows the molecular structure of a material to be analyzed by observing and measuring the interaction of nuclear spins when placed in a powerful magnetic field. For the analysis of molecular structure at the atomic level, electron microscopes and X-ray diffraction instruments can also be used, but the advantages of NMR are that sample measurements are non-destructive and there is less sample preparation required. Fields of application include bio, foods, and chemistry, as well as new fields such as battery films and organic EL, which are improving and developing at remarkable speed. NMR has become an indispensable analysis tool in cutting-edge science and technology fields.

By following previously reported synthetic procedure, a vanadium trimer (Cp*VCl2)3 was prepared as a purple coloured solid. Reaction of (Cp*VCl2)3 with an excess of LiBH4.thf at low temperature followed by pyrolysis in the presence of BH3.THF resulted in formation of blue coloured [(Cp*V)2(B2H6)2] (complex 1) and violet coloured [(Cp*V)2(B2H5 Cl)2] (complex 2) in good yield (Scheme 2). 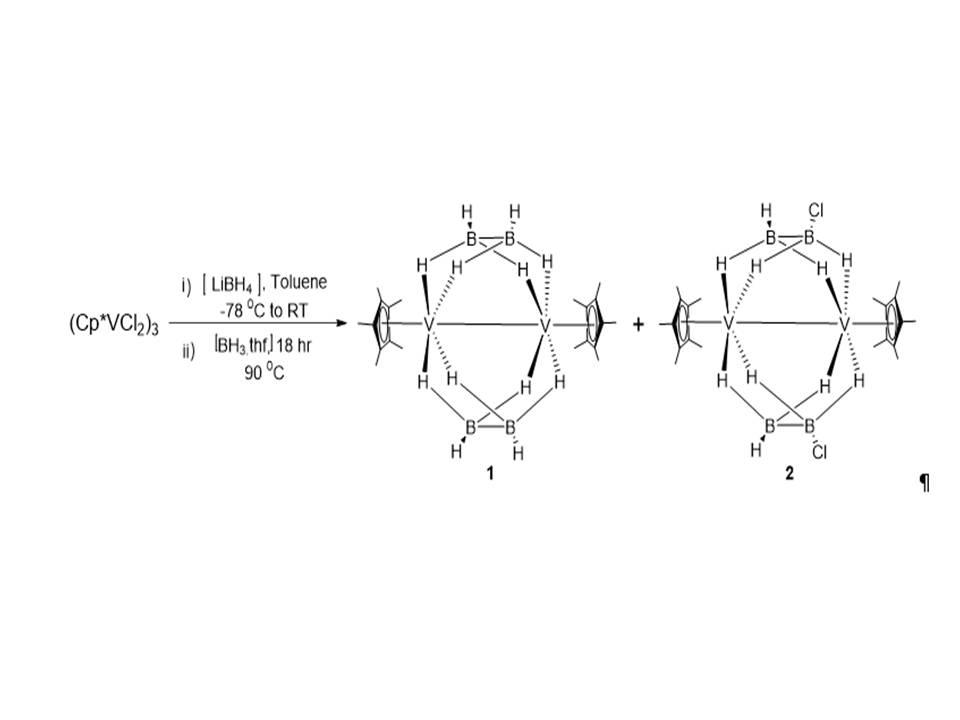 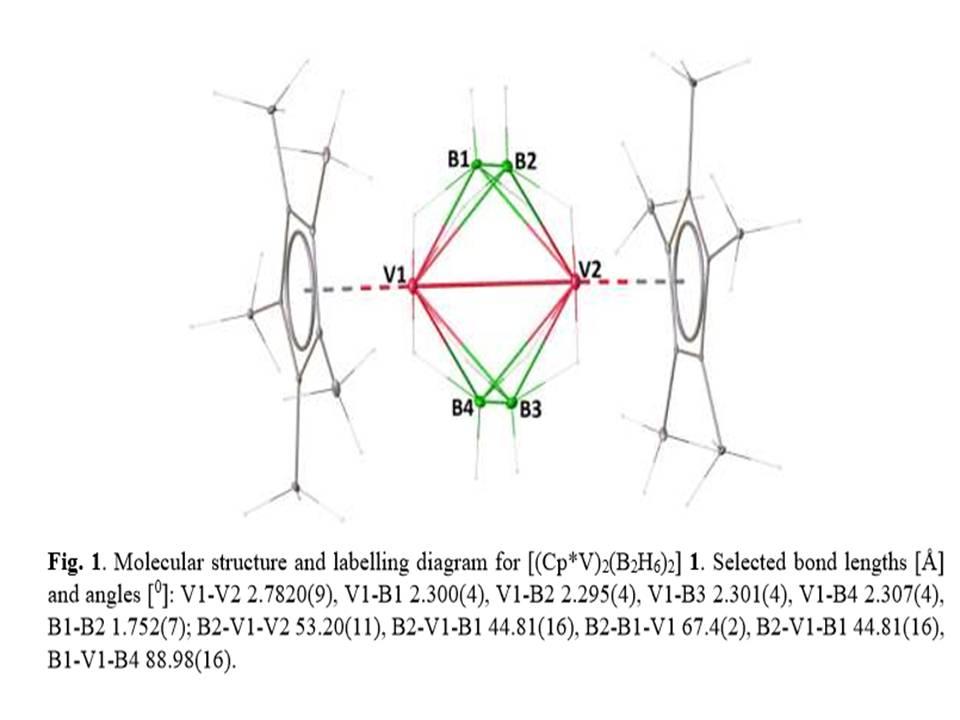 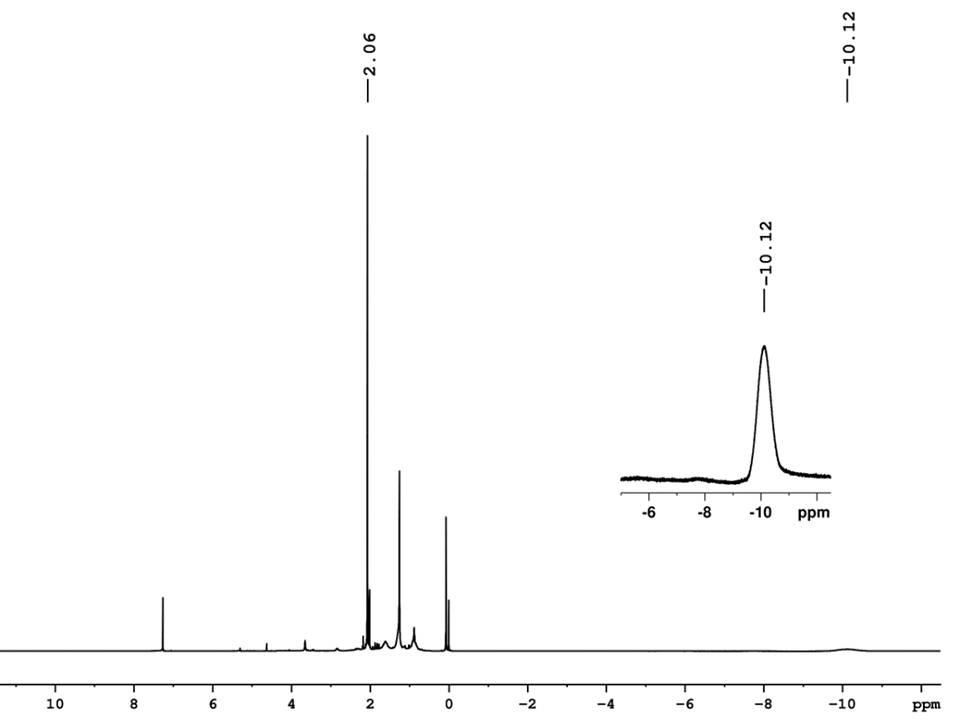 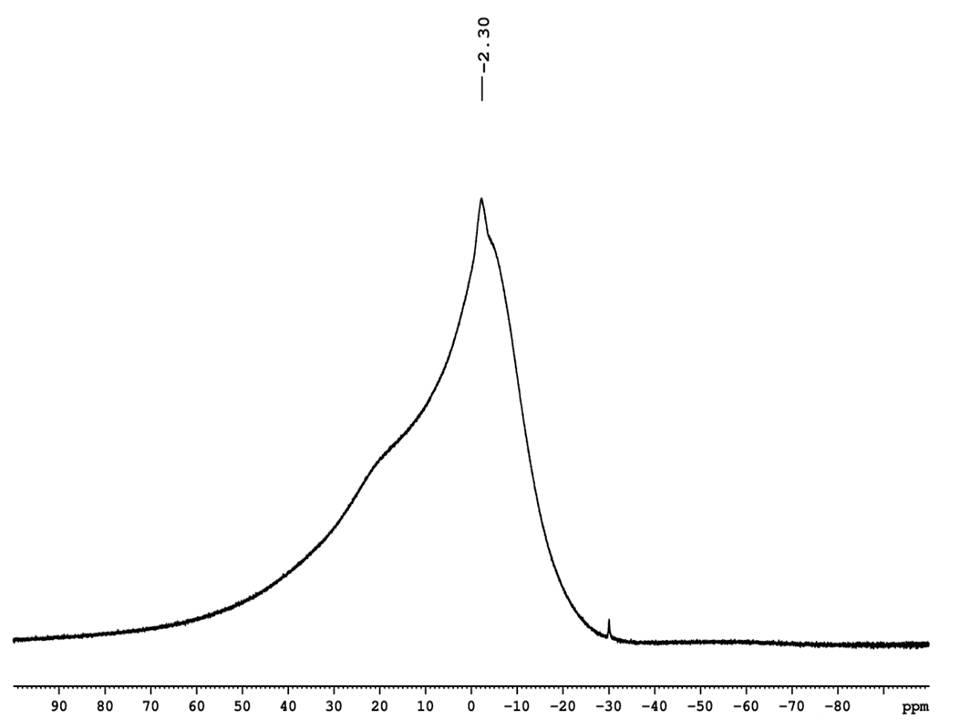 11B NMR spectrum of compound 1 in CDCl3

The 11B{1H} NMR spectrum of complex 2 displays a two resonance at δ=12.04 and -2.66 ppm. Both 1H and 13C NMR spectra imply one kind of Cp* ligand. To confirm the spectroscopic assignments and to determine the solid state structure of 2 X-ray structure analysis has been performed. The solid state (figure 4) is consistent with the spectroscopic assignment. 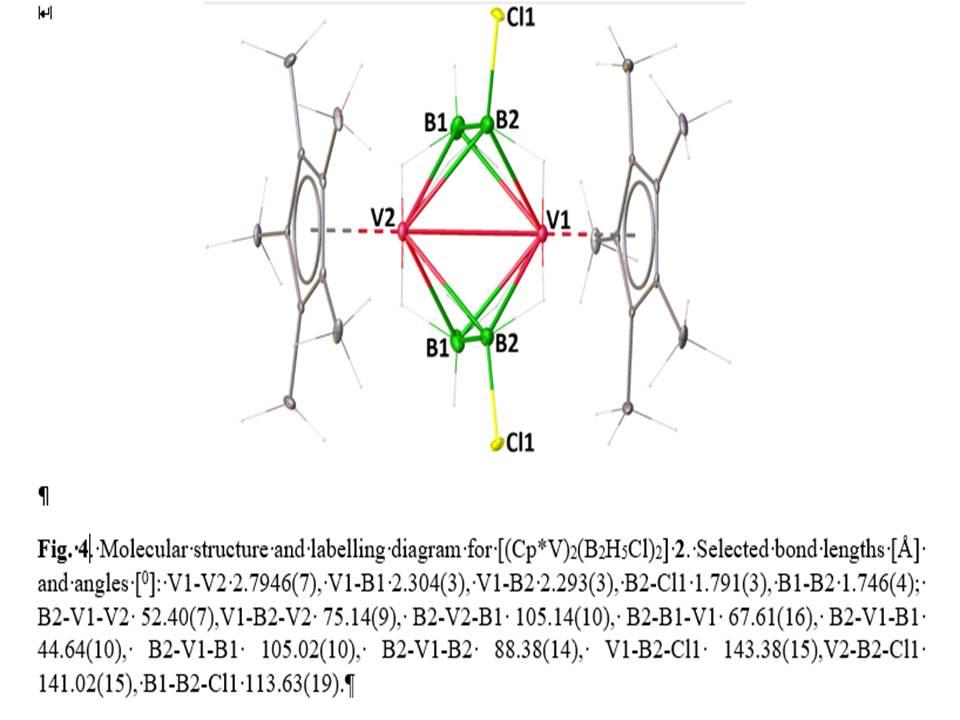 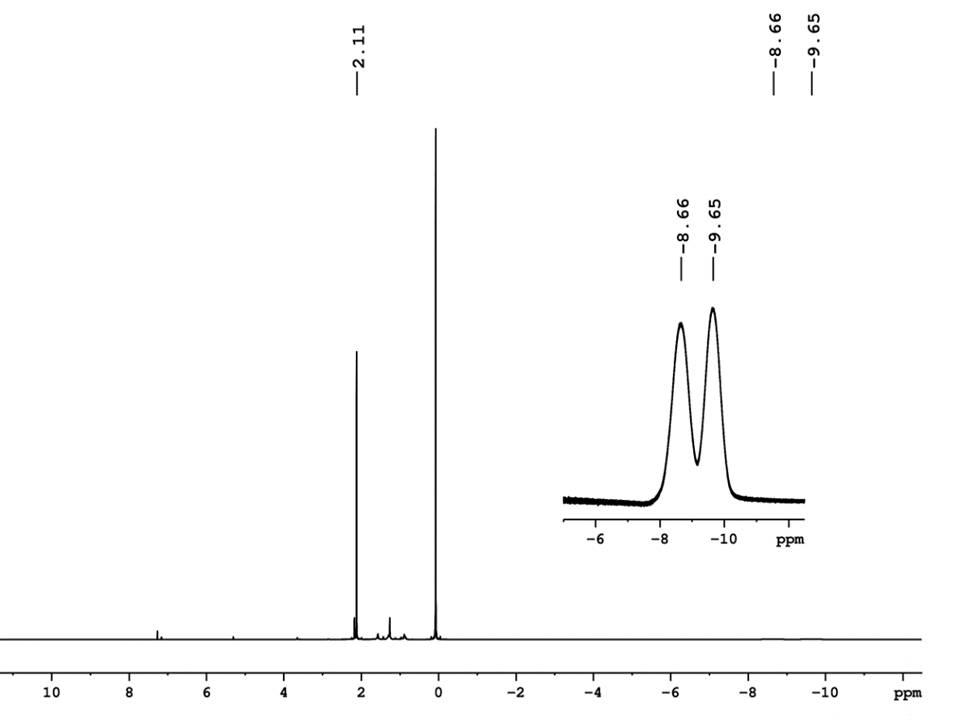 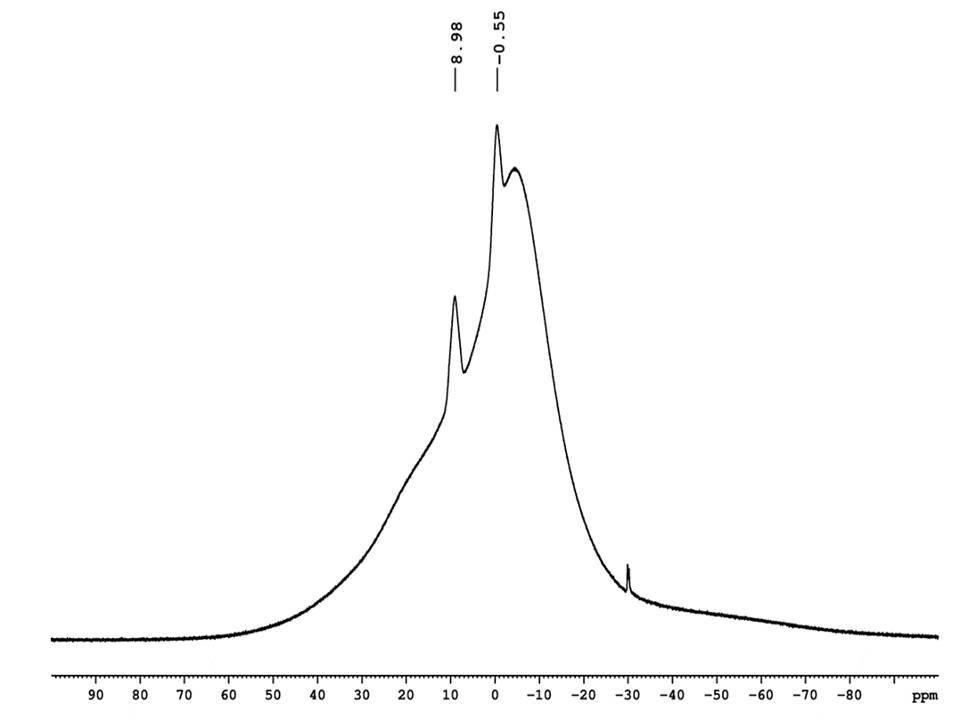 11B NMR spectrum of compound 2 in CDCl3

After the synthesis of BH3.THF and (Cp*VCl2)3, according to previously reported procedures, new vanadaboranes, [(Cp*V)2(B2H6)2] and [(Cp*V)2(B2H5 Cl)2] were successfully synthesized. These compounds were characterized using X-ray Diffraction, NMR, IR spectroscopy and mass spectrometry.

I am grateful to Indian Academy of Sciences, Banglore for giving me this excellent opportunity to gain knowledge, experience as well as work on a project under such learned and eminent scientists in addition to inspiring me towards attaining the goal of technology transfer.

I would like to thank Dr. Sundargopal Ghosh, Associate Professor, Department of Chemistry, for his continuous support in carrying out this project without hassles as well as encouraging me to explore the possibilities of new materials and discoveries.

I would also like to thank Anagha H, Ph.D. Scholar, IITM for his active involvement, continued guidance and timely support in the completion of the project along with a hands-on experience.

I am thankful to the fellow lab members for their continuous assistance during the project course.