In the present scenario, as the human population is increasing, their energy requirements are also increasing. According to the statistics only 34% of this energy is being utilised and rest 66% goes waste. So, there arises a very crucial need for the conversion of this waste energy to useful energy. Thermoelectric materials are employed here as they can convert waste heat energy to usable electrical energy. But as the conversion efficiency characterised by the figure of merit (zT) is relatively low in these materials, research is required in this field. These thermoelectric materials can be deemed as 'suitable' while referring to sustainable and clean energy sources. There are numerous examples in the bright side of thermoelectric effects, like the thermocouple. These thermocouples can be employed over to sense the temperature better than any temperature gauge. So, thermoelectrics play a very crucial role while talking about the 'Fuller utilisation of resources' in terms of energy.

With the growing energy demands each day, we are literally running out of resources for the generation of electricity or even energy. Post research, we get to know that nearly 66% of energy goes in vain in the form of heat due to parasitic heat losses and practically limited carnot efficiency. So, only 34% of the energy can be utilised. This fact raises a very important agenda for the conversion of waste heat energy to usable energy. Thermoelectric materials can be used over here as they can convert waste heat energy into electricity. But, as the conversion efficiency which is characterised by the figure of merit (zT) is low for these materials, that's why research is required in the area of thermoelectric materials. These thermoelectric materials can be considered as potential candidatures in terms of sustainable and clean energy sources. Thermoelectric effects can be widely implemented in this field, for example in thermocouples. In this way these thermoelectric effects play a major role in the maximum utilisation of resources.

Statement of the problems

2. In context of energy utilisation, a huge amount of energy is wasted in the form of heat.

Objectives of the research

The main objectives of this project are-

1. Calculation of seebeck coeffecient and plotting the standard calibration curve for T type thermocouple with the international data.

2. Synthesis of compound by solid state route and understanding its crystal structure.

1. Seebeck effect- When the junctions of two dissimilar materials maintained at different temperatures form a closed circuit, then voltage is developed. This is called as seebeck effect.

It is measured by seebeck coeffecient (S). Only net seebeck voltage between metals can be measured. Thermocouple is based on seebeck effect (1).

The potential difference (∆V) developed across a piece of metal is directly proportional to the temperature difference (∆T), i.e.

2. Peltier effect- When an electric current is passed through the junctions of two dissimilar materials which are forming a closed circuit, heat is either liberated or absorbed at the junctions depending on the flow of the current. This is called as peltier effect.

3. Thomson effect - When an electric current flows through an unequally heated material, heat is either liberated or absorbed not only at the junctions, but throughout the material. This is called as thomson effect.

- Thermocouple is a thermoelectric device that is used for measuring temperature. It uses two different metals with one junction maintained at a reference temperature and the other used to sense the temperature(2).

Seebeck effect is utilised here in thermocouple. The voltage across each metal depends on its seebeck coeffecient, so the potential difference between two wires will depend on SA - SB

So, the e.m.f between two wires will depend on-

Here SAB = SA - SB is the seebeck coeffecient for the thermocouple pair A-B.

X-Ray Diffraction- It's a basic technique used to study the crystal phases. It basically works on the concept of constructive interference of x-rays. Here, the x-rays are made to fall on the sample placed on the glass slide. Due to the crystal structure of the solid, these x-rays undergo diffraction. A detector then identifies constructive interference of these diffracted waves and a graph is plotted between the angle (2θ) and the intensity. XRD pattern is more like a fingerprint of a crystal. It's also used to calculate the lattice parameter, stresses in the material, and crystallographic texture too.

Synthesis of material- The materials were taken in stoichiometric ratio in a quartz tube and then they were sealed in dynamic vacuum(10-3mbar). The sample was then melted by Induction Melting , which was followed by rapid quenching in water. The melted sample was then annealed in furnace and the resulting ingot was grounded into fine powder by mortar pestle. The resulting powder was sintered in Vacuum Hotpress under high temperature and load. The sintered pellets were then characterised by X-Ray diffraction for the determination of the phases. XRD patterns were then refined by Reitvield refinement for the quantification of secondary phases and for the calculation of lattice parameters.

Standard Calibration Curve- To achieve the accurate readings from a thermocouple, calibration of a thermocouple is a necessity. This standard calibration curve basically retraces the corresponding value of seebeck coeffecient for a specific temperature or vice-versa.

To develop a calibration curve for a particular type of thermocouple, the e.m.f is measured when Tj is varied and Tr is held fixed at 0°C. In the result, a table of e.m.f versus temperature values is obtained. A polynomial curve that fits the calibration data is given as-

Here, E0j is the e.m.f and Tj is the temperature of the material that is being calculated. Tr is the reference temperature which is kept constant at 0°C. 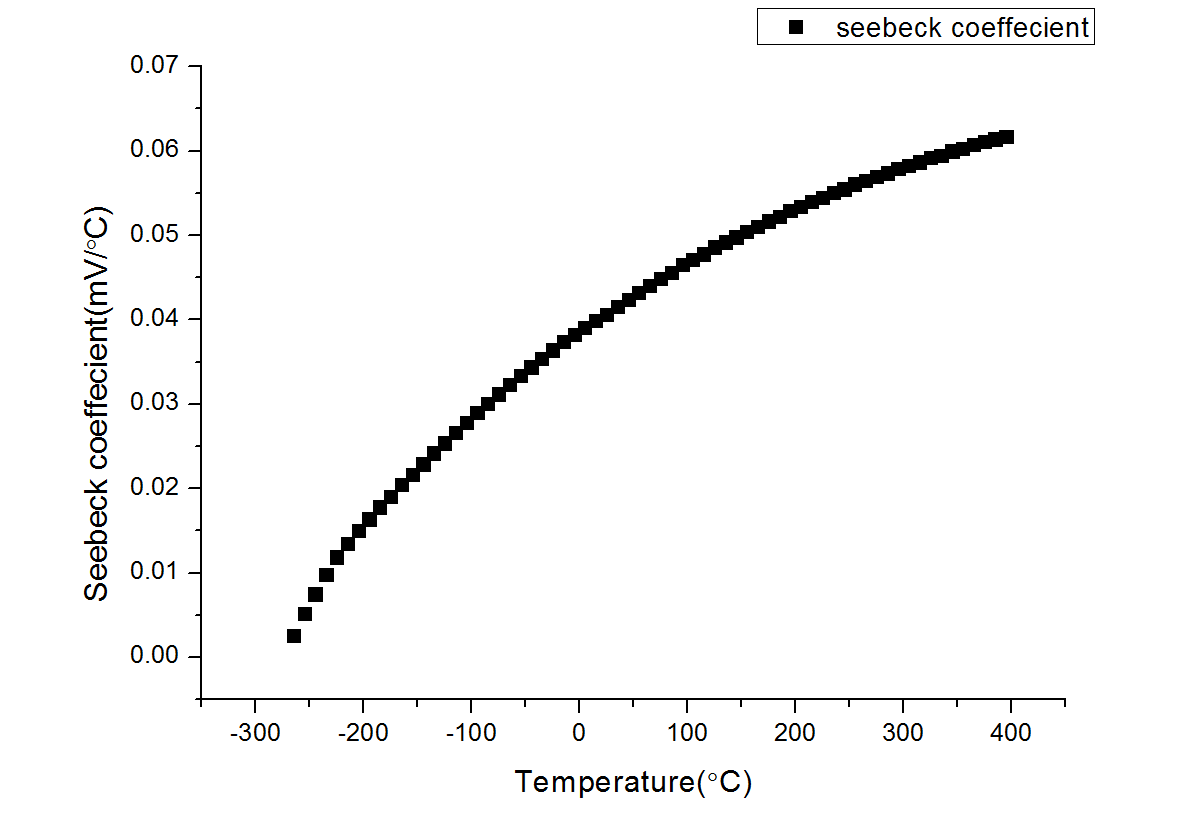 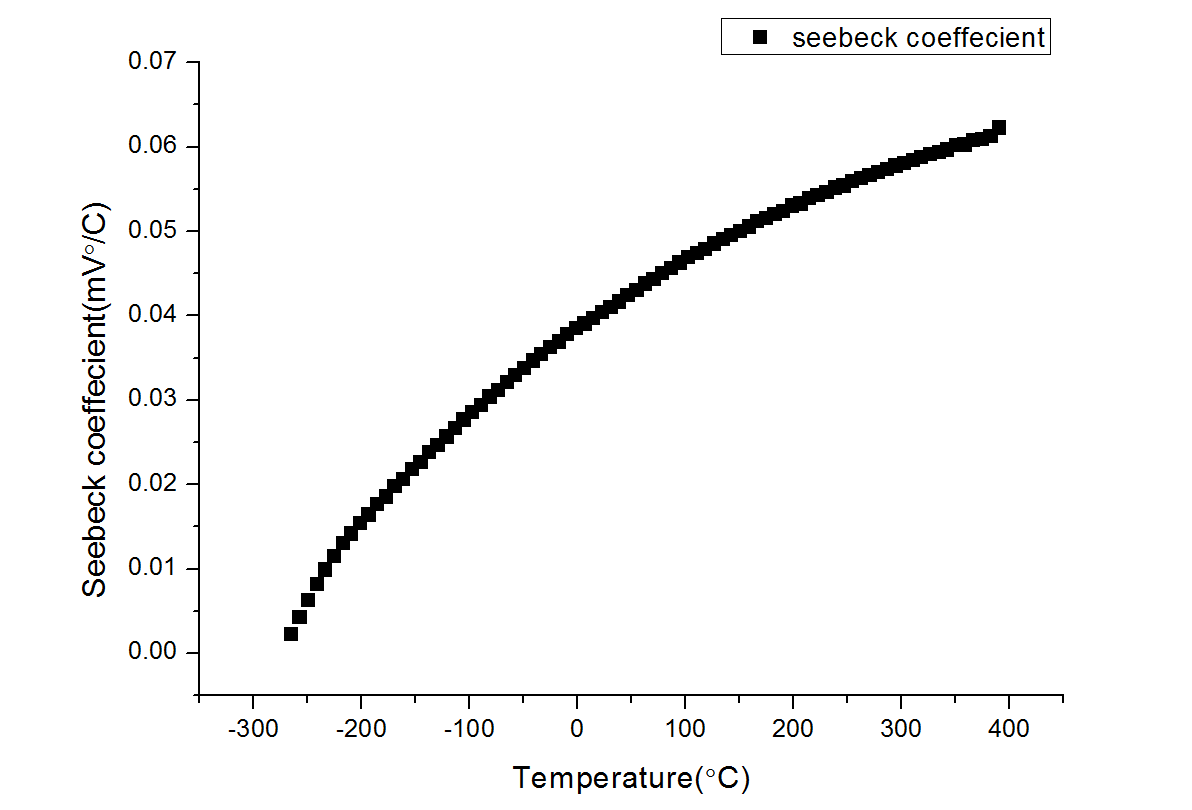 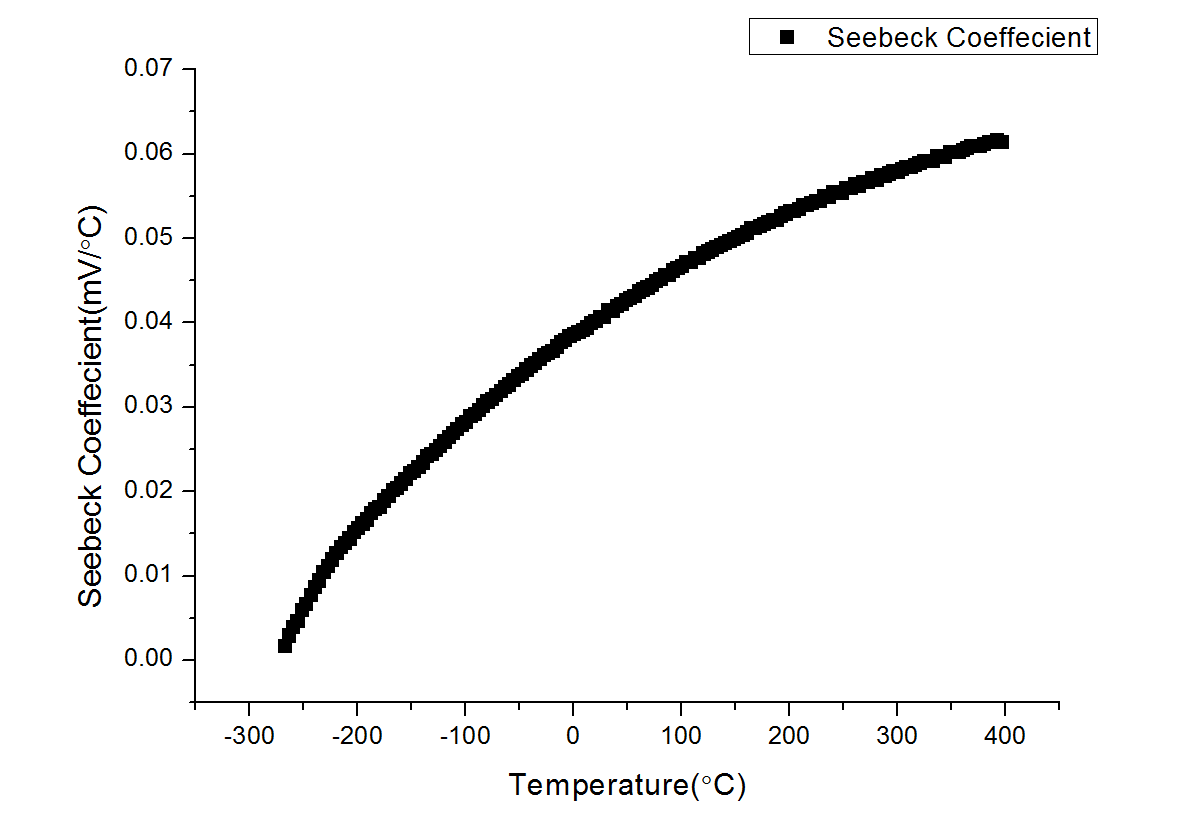 The following curves have been plotted with interational data.

First and foremost, I would like to thank Dr Ramesh Chandra Mallik for giving me the opportunity to work under his mentorship.His way of dealing with the problems has been an inspiration for me.

I am greatful to all my labmates- Sahil bhaiya, Sanyukta mam, Uma bhaiya, Dilip bhaiya for their support.

I am very thankful to the Indian Academy of Sciences (IAS) for providing me such an opportunity.

A very special thanks to my mom and all my family members for their constant support.