Infectious keratitis is a serious ocular infection that can lead to severe visual impairment and blindness. Bacterial infection is the most common cause of infectious keratitis. P. aeruginosa is the most common microorganism implicated in bacterial keratitis among contact lens wearers. Pseudomonas corneal infections typically are associated with the use of contact lenses. The aim of my study is to characterize virulence factors of Pseudomonas aeruginosa associated keratitis. A total of ten Pseudomonas aeruginosa clinical isolates were collected from corneal scrapings of patients with keratitis at LV Prasad Eye Institute, Hyderabad. Firstly, virulence associated genes were genotyped in all the isolates by Polymerase chain reaction(PCR). Virulence factor genes such as Exoenzyme S(ExoS), ExoenzymeT(ExoT), Phospholiase(ExoU), Adenylyl cyclase(ExoY), elastase(LasB), Alkaline protease(AprA) and lost adherence sensor (LadS) are chosen for the study. Bacterial DNA was isolated using bacterial genome isolation kit (GenElute bacterial genomic kit, Sigma-Aldrich). The quality of extracted DNA was assessed by agarose gel electrophoresis and concentration was determined using the Nanodrop. PCR was performed for the ten isolates and the products were examined by agarose gel electrophoresis. Next, their biofilm formation ability was assessed using Crystal violet assay. The preliminary results show a difference in the ability of the different isolates to form biofilm. These results can be correlated with the clinical findings and will help define virulence of Pseudomonas aeruginosa in human corneal infections in India.

Keratitis is the inflammation of the cornea, the transparent front part of the eye that covers the iris, pupil, and anterior chamber. Infectious keratitis is an ocular infection which may lead to visual impairment and blindness if left untreated. It can be caused by fungi, bacteria, virus, mycobacteria and protozoa. Bacterial keratitis is the most common cause of infectious keratitis and the second common cause of irreversible blindness worldwide after cataracts(1). Bacterial keratitis can cause disruption of the integrity of the corneal epithelium. The most common risk factor for bacterial keratitis is contact lens wear. Improper disinfection of the contact lens and overnight wear may result in increased susceptibility to corneal infection. Common causal bacteria include Staphylococcus aureus, coagulase-negative staphylococci, Streptococcus pneumonia and Pseudomonas aeruginosa. P. aeruginosa is the most common microorganism implicated in bacterial keratitis among contact lens wearers. Less commonly, fungi or acanthamoeba can be responsible the corneal infection. 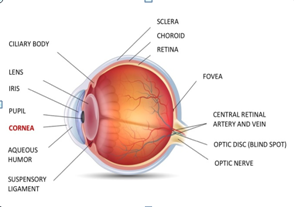 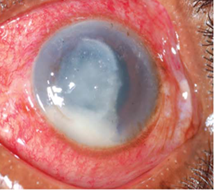 Pseudomonas aeruginosa is a gram-negative bacterium, found in the environment, especially in moist places. It is often available to contaminate the contact lens cases and can cause corneal infection. P. aeruginosa is one of the most organism causing nosocomial infection. Based on the transmission electron microsopy study, it has been shown that P. aeruginosa can infect stroma within one hour of adhering to the injured corneal epithelium and in the next 18-24 hours the stromal infiltration extends horizontally and vertically. This leads to the formation of severe anterior chamber reaction with hypopyon(2). P. aeruginosa uses a type III secretion system to deliver effector proteins into targeted host cells. The type III effector proteins are thought to prevent wound healing and phagocytosis, as well as promote systemic spread of the organism(3).

P. aeruginosa utilizes a large number of secreted and cell associated virulence factors that have been implicated in the pathogenesis of infection. These include exotoxin A, phospholipase, alkaline protease, elastase, pyocin, pili, flagella, and lipopolysaccharide (4). One important determinant of virulence in P. aeruginosa is the type III secretion system (TTSS). The P. aeruginosa type III secretion system consists of five functional parts, proteins responsible for secretion, proteins that translocate the secreted proteins into host cells, regulatory proteins, associated proteins like chaperones, and effector proteins. The Type III secretion system is important for its expression. It helps in proteolytic inactivation of numerous extracellular components of innate and adaptive immune system of the host cell.

Only four effector proteins are known to be secreted by the P. aeruginosa type III secretion system: ExoS, ExoT, ExoU and ExoY(5). Few other virulence factors genes include LasB, AprA and LadS. ExoS is a bifunctional toxin with GTPase-activating and ADP ribosyl transferase activities. These activities lead to the disruption of the actin cytoskeleton and apoptosis-like cell death.ExoT is 76% identical to ExoS and also has both GTPase-activating and ADP ribosyl transferase activities; however, the ADP ribosyl transferase activity of ExoT is directed against different substrates from that of ExoS. These activities lead to the disruption of the actin cytoskeleton and apoptosis-like cell death. ExoU has phospholipase activity that results in the rapid lysis of many mammalian cell types. ExoY is an adenylyl cyclase. Its role in pathogenesis is unclear. The expression of these virulence factors are important for the mechanism of pathogenesis of P. aeruginosa. The TTSS transports toxins to host cells, and includes a needle-like apparatus, effector proteins (ExoS and ExoU), and a pore forming protein. P. aeruginosa isolates contain two TTSS genotypes that involve the ExoS gene in invasive strains and the ExoU gene in cytotoxic strains. Almost all strains of P. aeruginosa possess a set of genes for the TTSS, but not all strains carry genes for all of the TTS toxins (6). LasB encodes elastase and has metalloendopeptidase activity. AprA encodes alkaline protease and it blocks the complement-dependent neutrophils function. LadS is lost adherence sensor. It is a hybrid sensor kinase that controls the reciprocal expression of genes for the type III secretion and biofilm promoting polysaccharides. Biofilms are densely packed communities of microbial cells that grow on living or inert surfaces and surround themselves with secreted polymers. This development of a biofilm allows the bacterial cells to become more resistant to the innate immune responses and antibiotics.

The aim of the study is to characterize virulence factors of ocular clinical isolates of Pseudomonas aeruginosa associated with keratitis.

* To isolate genomic DNA of P. aeruginosa from the collected isolates.

* To assess the biofilm forming ability by crystal violet assay.

Keratitis caused by P. aeruginosa can progress rapidly and can lead to corneal perforation and melt, resulting in the loss of vision. Contact lens (CL) wearers are especially susceptible to development of P. aeruginosa keratitis. Ring abscess, which is a ring-shaped accumulation of polymorphonuclear leukocytes surrounding a central corneal lesion is observed in P. aeruginosa keratitis. P. aeruginosa can show various clinical features, but little is known about factors that determine the clinical features. In the previous studies, the clinical features of the keratitis patients like presence of ring abscess and hypopyon were correlated among the contact lens wearers and non contact lens wearers. These were compared with the age, sex and trauma conditions of the patients. The contact lens wearers showed positive results for ring abscess than the non contact lens wearers. The mean age of the contact lens wearers were younger than the non contact lens wearers. For virulence factor of keratitis, swimming and swarming assays, biofilm assay, elastase activity and protease activity were examined. The extent of swimming motility in the CL(+)ring(+) or CL(-) groups was higher than the CL(+) ring(-)group (both, P < 0.05), whereas the extent of swarming motility for the CL(+) ring(+) group was higher than the CL(+)ring(-) or CL(-) groups (both, P < 0.05).
The prevalence of the ExoS+/ExoU- genotype in the CL(+) ring(+) or CL(-) group was higher than the CL(+) ring(-) group (both, P < 0.05). Other virulence factors were not significantly different among the three groups(7). Multiple studies have reported that a vast majority of P. aeruginosa isolates contain either ExoS or ExoU but not both(8,9,10). The presence of hypopyon correlated significantly with age, proteolytic activity, elastase, and swarming motility. Swarming motility was correlated with all clinical manifestations. Among virulence factors, swarming motility was associated with proteolytic activity, cell surface hydrophobicity, and swimming motility. Elastase activity was correlated with proteolytic activity, and prevalence of ExoS was associated with swimming motility.
Interestingly, one report has shown the expression of both ExoS and ExoU in the corneal infected patients by P. aeruginosa. Out of 101 P. aeruginosa keratitis isolates, 56 expressed ExoS and ExoT genes compared with 18 isolates which expressed ExoU and ExoT and 27 isolates which expressed both ExoU and ExoS(12). The results of that study also showed that patients infected with the ExoS expressing invasive strains had a better outcome following treatment compared with ExoU expressing cytotoxic strains, possibly because of less severe disease. Another group have reported the expression of both ExoS and ExoU and even found differences in exotoxin expression in clinical isolates and could not detect clinical differences in patients and stated the reasons like differences in the inoculum, the time of sampling, or antibiotic treatment(11). In the present study we aim to further characterize virulence factors of P. aeruginosa strains from corneal keratitis patients.

To Isolate the Genomic DNA of P. aeruginosa from the Collected Isolates

The virulence genes choosen for the study are ExoS, ExoT, ExoU, ExoY, LasB, AprA and LadS. PCR was performed for the ten isolates against the primers(Table 1) of the virulence genes and the products were examined by agarose gel electrophoresis. The virulence genes were optimized at different temperature using gradient PCR and was found to be function at 60˚C. PCR amplification was performed using the following protocol: 95°C for 3 min, then 30 cycles of 95°C for 30 s, 60°C for 30 s, 72°C for 30 s, followed by 72°C for 10 min. PCR products were electrophoresed through agarose gels (1.5% w/v ) containing ethidium bromide and visualized using UV radiation. 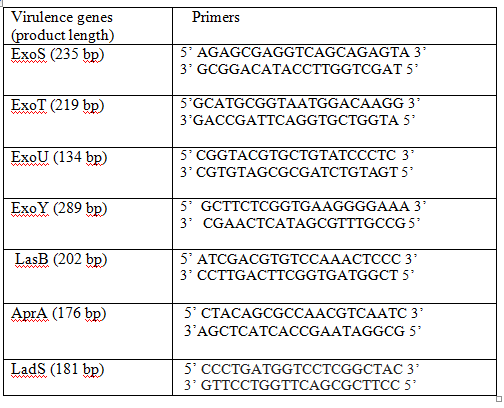 To Assess the Biofilm Forming Ability by Crystal Violet Assay

For the biofilm assay, diluted overnight culture was added to the 96 well microtiter plate and kept for incubation overnight at 37˚C. The bacterial culture was discarded and the wells were washed with water. 125μl of 0.5% crystal violet solution was added to each well and kept at room temperature for 15 minutes for staining the biofilm. After the incubation the wells were washed with water twice and left to dry for 20-30 minutes. Finally, 200μl of 30% acetic acid was added to each well to solubilize the crystal violet for 10 minutes. The optical density (OD) was measured at 590nm. The assay was performed for both 24 hours and 48 hours. The preliminary results show a difference in the ability of the different isolates to form biofilm. 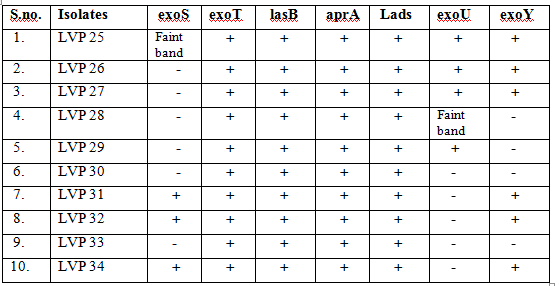 Table 2 Genotyping of the virulence genes of P. aeruginosa

Gel images for genotyping of the virulence genes ExoU, ExoY, ExoS, ExoT and LadS 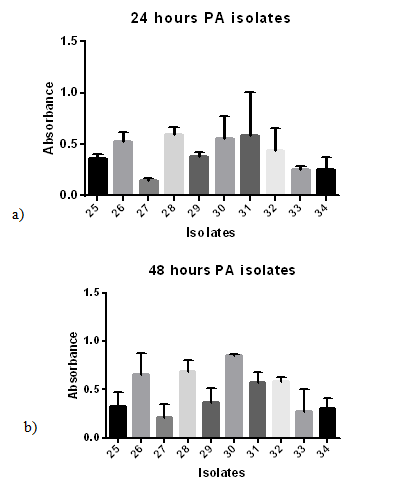 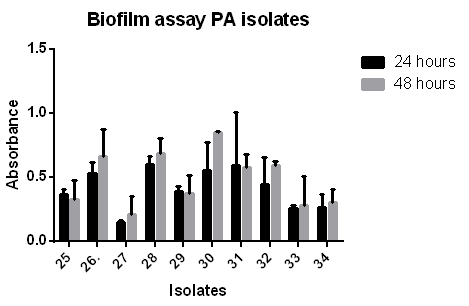 In the present study, the virulence factors of P. aeruginosa strains from corneal infection were characterized. The invasive strain with ExoS and cytotoxic strain with ExoU were reported to be differential in their expression. Other virulence factors such as protease activity with AprA, elastase activity with LasB, biofilm promoting gene LadS and ExoT were expressed in all the ten clinical isolates. We did not observe any correlation between the presence/absence of type three secretion genes and their biofilm forming ability. In the future, these results can be correlated with the patient’s clinical features, antibiotic susceptibility and disease management. This will help in further understanding of the virulence of the P. aeruginosa in corneal infection in India.

I would like to admit that it would have been difficult for me to complete this study without the support and encouragement of the people to whom I extend my gratitude.

I express my sincere heartfelt thanks to Indian Academy of Science (IAS) for giving me this wonderful opportunity to develop my skills and research knowledge. I wish to place on record, my sincere gratitude to Dr. Sanhita Roy for accepting me to work under her guidance and for providing me with the valuable suggestions. I would also like to thank LV Prasad Eye Institute, Hyderabad for allowing me to do my summer project in this prestigious institution. I am extremely grateful to Dr. Alpana Dave for her valuable guidance and great patience during the period of my training. I would like to thank her for providing me with a lot of moral support and motivation throughout the project. It also gives me an immense pleasure in expressing my gratitude to the lab members of Research Biochemistry and friends from LVPEI.
I also express my deep love and gratitude to my family and friends for the completion of my project.