Wnt proteins comprise of 19 secreted glycoproteins which on binding to a frizzled family receptor downstream the signal and regulates gene transcription. Nuclear accumulation of β-catenin in Wnt signaling is broadly recognized as marker of cancer diagnosis which regulates fat and glucose metabolism. After over viewing the role of Wnt signaling pathways in cancer therapy, some 1,2,3-triazole tethered 1,2,4-triazole based new indole derivatives have been designed. The key intermediate (1H-indol-3-yl)(5-mercapto-4-phenyl-4H-1,2,4-triazol-3-yl)methanone required for the synthesis of target molecule has been synthesized in a three step synthetic procedure starting from indole. Towards the synthesis of the above said intermediate, indole was treated with oxalyl chloride to form indolglyoxalylchloride which was immediately reacted with hydrazine hydrate to afford indolglyoxamide intermediate. Indolglyoxamide was later reacted with different aryl and alkyl substituted isothiocyanates to form different substituted thiosemicarbazides which upon a base catalysed cyclization yields the cyclized intermediate (1H-indol-3-yl)(5-mercapto-4-phenyl-4H-1,2,4-triazol-3-yl)methanone. This intermediate will be used for synthesizing target compounds i.e., 1,2,3-triazole tethered 1,2,4-triazole based indole derivatives,(5-((1-phenyl-1H-1,2,3-triazol-4-yl)methylthio)-4-phenyl-4H-1,2,4-triazol-3-yl)(1H-indol-3-yl)methanones.

Cancer is a disease in which abnormal cells divide uncontrollably and destroy body tissues. The abnormal cell growth has the potential to spread or invade to other parts of the body. Cancer cells form a subset of neoplasms which are a group of cells that have undergone unregulated growth and will form a mass or a lump. One of the main reasons for cancer is mutation which stimulates the cell either produces too many proteins that trigger a cell to divide or it stops producing proteins that inhibit cell division.

Cancerous cells do not repair themselves or die. They have faulty p-53 protein. The protein p-53 usually checks if the cell can repair its genes or if the cell should die. Various biological pathways have been explored to prevent uncontrolled division of the cell. Wnt signalling pathway is one such pathway. Thus inhibition to the Wnt signalling pathway can prove to be a preventive measure for curing cancer.

The Wnt signalling pathways are a group of signal transduction pathways which begin with proteins that pass signals into a cell through cell surface receptors.

Three Wnt signalling pathways have been characterized as the following:[3] 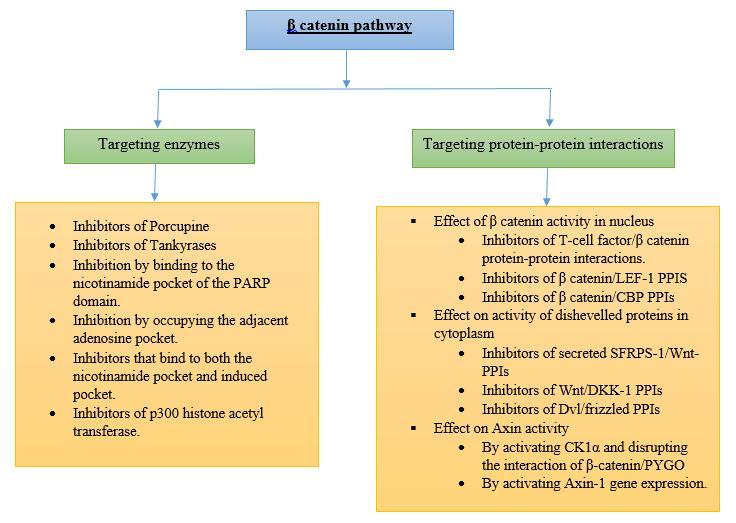 The Wnt signalling pathways are a group of signal transduction pathways which begin with proteins that pass signals into a cell through cell surface receptors. Wnt/β-catenin signalling is a complex network that regulates important biological processes such as embryonic development, cell fate determination, cell motility and stem cell renewal. Deregulation of the Wnt signalling proteins often leads to various pathologies including cancer since cancer is majorly caused by proliferation and multiplication of mutated cells.

The Wnt proteins comprise 19 secreted glycoproteins that serve as extracellular Wnt signals. On binding to a Frizzled family receptor, Wnt proteins trigger intracellular signal transduction cascades by the canonical Wnt/β-catenin pathway or the β-catenin independent pathway. The Wnt/β-catenin cascade regulates gene transcription and is therefore thought to be closely associated to cancer development. [1]

How does inhibition of Wnt signalling help?

In the absence of Wnt signalling, β-catenin in the cytoplasm of the cell is broken down by the destruction complex. Destruction complex comprises of Axin, adenomatous polyposis coli (APC), glycogen synthase kinase 3 (GSK3) and casein kinase 1α (CK1α). Degradation of β-catenin is carried out by phosphorylation of β-catenin at Ser45 mediated by CK1 and phosphorylation at Ser33, Ser37 and Thr41 mediated by GSK3.

The destruction complex is disassembled when the wnt ligands bind to the cysteine rich domain of frizzled receptors and the cytoplasmic β-catenin is imported to the nucleus. [1][3]

Many inhibitors to the Wnt signalling pathway have been designed till now and are in use as anti-cancer agents. But the cancer cells have developed resistance to some of the drug molecules. Also, each drug leads to some acute or chronic side effects which may be harmful to the patient. Thus there is a need to come up with newer drugs which target the proteins responsible for cell division.

The indole scaffold is one of the most widespread heterocycles in the naturally occurring and synthetic bioactive compounds. Due to its biodiversity and versatility, it has been a highly privileged motif for the target-based design and development of anticancer agents. In the last decade, many researchers have reported various indole-based compounds with distinct mechanisms involved in producing potential anticancer activities, indicating the importance of indole motif in the anticancer drug development.

Keeping in view of the importance of 1,2,4-triazoles as inhibitors of Wnt signalling, some new indole based 1,2,4-triazole derivatives were synthesized for targeting Wnt signalling pathway. To accomplish the synthesis of target molecules a multi-step synthetic methodology was adopted as shown below.

The following two compounds are in clinical trials as small molecule inhibitors of the Wnt pathway for the treatment of cancer: [1]

Porcupine is an O-acyl transferase enzyme and is essential in acylation of Wnt proteins which is required for them to show their activity. Therefore hyperactivity of Porcupine results in growth of cancerous cell.[1]

Tankyrases include TNKS1 and TNKS2 are a member of thepoly(ADP-ribose) polymerase (PARP)family. PARP catalyse the transfer of ADP ribose units from NAD+ to the target protein one by one thereby forming a polymer of ADP ribose.

PARP have various cellular functions such as repair of DNA damage, regulation of transcription, intracellular trafficking, chromatin modification, formation of the mitotic apparatus and cell death.

PARPs are also called ADPribosyltransferases (ARTDs) in the recent nomenclature.

1.      an ANK domain (24 ankyrin repeats): It is involved in protein-protein interactions.

2.      a SAM domain (sterile α motif): it is involved in multimerization of Tankyrases

3.      an ART domain (ADP- ribosyltransferase): common to all PARPs

In addition, TNKS1 has a HPS domain which are homopolymeric runs of histidine, proline and serine.

TNKS1 and TNKS2 play an important role in virus replication.

Tankyrases play an important role in wnt signalling. Increased expression of TNKS1 and TNKS2 has been observed in various cancers. Hence, inhibitors tankyrases can prove to be potential drug target. 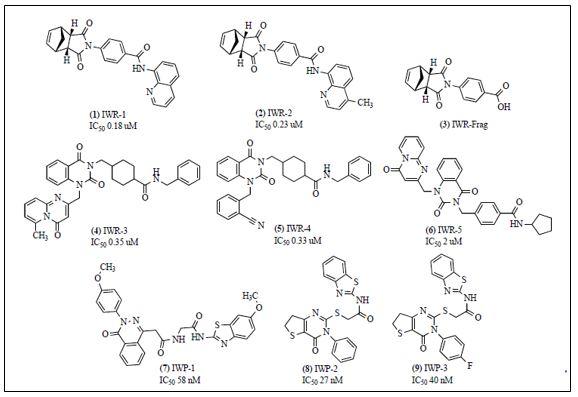 • Inhibition by binding to the nicotinamide pocket of the PARP domain

The compound has been identified as a potential TNKS inhibitor by Novartis, Huang et al. using a chemical genetic screen.

Using XAV939 as lead, many more potential inhibitors of TNKS have been discovered which are more selective and potent. [1]

Ethacrynic acid is an effective inhibitor of Wnt signalling pathway by a cell based Wnt assay. It has downregulated Wnt/β-catenin target genes including LEF-1, cyclin D1 and fibronectin in chronic lymphocytic leukaemia cells. LEF-1/β catenin complex is destabilised on binding of ethacrynic acid with LEF-1 protein.[1]

Effects on activity of disheveled proteins in cytoplasm

DKK-1 is a secreted inhibitor of canonical Wnt signaling. Calcitriol, the most active vitamin D metabolite was reported to have increased expression of DKK-1 RNA by Aguilera O et al.[1] 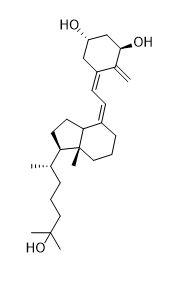 • By activating CK1α and disrupting the interaction of β-catenin/PYGO

Degradation of β catenin occurs by a destruction complex which consists of Axin, adenomatous polyposis coli (APC), glycogen synthase kinase 3 (GSK3) and casein kinase 1α (CK1α). Thorne et al. identified pyrivinium as an inhibitor of Wnt signalling using Xenopus laevis egg extract. It binds to all members of CK1 family and activates CK1α which is a part of the destruction complex of β catenin. It also induces degradation of Pygopus (PYGO), the Wnt transcriptional component. There it is a potential inhibitor of Wnt signalling pathway. Pyrivinium has EC50 value of ~10 nM.[1] 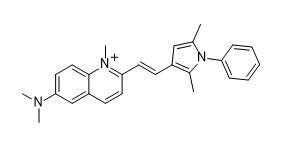 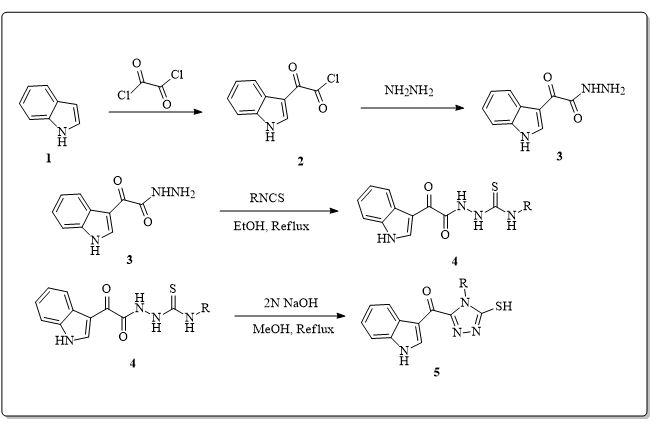 10g of indole (1) was dissolved in 100 mL of diethyl ether. After complete dissolution, 10 ml of oxlyl chloride was added slowly to the reaction mixture and stirred for 15 min. Orange colour precipitate of 2-(1H-indol-3-yl)-2-oxoacetyl chloride (2) are formed in the reaction which was filtered off and dried under high vacuum pump and immediately pursued for the further reaction without any delay.

0.5g of compound 3 2-(1H-indol-3-yl)-2-oxoacetohydrazide and 0.53g (1.2 equivalents) of different substituted aryl and alkyl isothiocyanates were refluxed in absolute ethanol (5mL) for 6 hr. Solid precipitate was formed in the reaction mixture was filtered of and washed with cold alcohol to yield compounds. TLC was run in TEF 4:5:1 which indicate the completion of the reaction.

To the methanolic solution of 2-(2-(1H-indol-3-yl)-2-oxoacetyl)-N-phenylhydrazinecarbothioamide (0.1 g). 2N solution of NaOH (10 mL) was added to it and refluxed for 12 hours. After the completion of the reaction monitored by TLC (run in TEF 4:5:1), reaction mixture was poured onto crushed ice and was neutralised with 2N HCl to give the solid precipitate. The solid precipitate was filtered off, washed with excess of water, dried under high vacuum and recrystallized in ethanol to yield pure compounds. 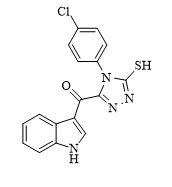 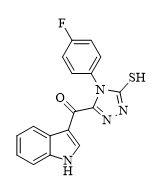 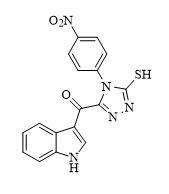 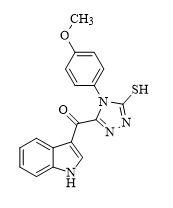 Above designed Indole based 1,2,4-triazole derivatives (5a-d) were synthesized as outline in Scheme 1. Indole 1 was reacted with the oxalyl chloride to give 2-(1H-indol-3-yl)-2-oxoacetyl chloride 2 which was then reacted with the hydrazine hydrate to form 2-(1H-indol-3-yl)-2-oxoacetohydrazide 3. Compound 3 was further refluxed with different aryl isothiocyanates to afford different substituted thiosemicarbazides (4a-d). These thiosemicarbazides (4a-d) were cyclized with 2N NaOH to afford 5-mercapto-1,2,4-triazoles (5a-d) in 60-70% yields.

Formation of thiosemicarbazide (4a-d) from hydrazide (3) was confirmed by the appearance of four singlets corresponds to -NH groups at δ 12.29, 10.85, 10.19, and 10.13 ppm in 1H-NMR (4c). Base catalised cyclization was confirmed by the appearance of a singlet corresponds to –SH proton at δ 14.30-14.66 ppm and the disappearance of three singlets corresponding to –NH groups of thiosemicarbazide. 5-mercapto-1,2,4-triazoles with aromatic substitution on nitrogen (5a-d) were observed as tautomers in different ratios as observed from 1H-NMR. Appearance of a singlet corresponds to –NH proton at δ 10.43-11.87 ppm confirmed the existance of it’s tautomer. It was further confirmed by IR which obtained absorption bands for S–H at 2535-2643 cm-1, C=N (triazole ring) stretching bands at 1578-1633 cm-1 and C=S at 1210-1237 cm-1.

With the aim to develop inhibitors of Wnt signalling pathways, some new indole based-1,2,4-triazole derivatives have been successfully prepared in a multistep synthetic strategy starting from indole.

I thank Prof. Ahmed Kamal, Pro-Vice Chancellor, Jamia Hamdard for giving me the opportunity to work in his research group. I also thank Dr. Syed Shafi, Assisstant Professor, Jamia Hamdard and his research scholars for their guidance and support. I thank India Academy of Sciences for providing the financial assistance under summer research fellowship program.