Professor, Department of Physics and Astro-Physics, University of Delhi, Delhi 110 007

This project consists of a study of basic nuclear models, such as Liquid Drop Model, Shell Model and the Nilsson model for nuclei with different shapes at the ground state. Basic properties of nuclei were studied and computer programs were generated to calculate the spin, parity, magnetic moment and binding energy of the nucleus using c++ programming language. The Liquid drop model of a nucleus is aid in the calculation of the nuclear binding energy. This model assumes that the ground state of nucleus is spherical. If the nucleus is excited by the addition of a specific kinetic energy, the spherical geometry may be distorted into a dumbbell shape and then may be split into two fragments. From this model we can deduce the semi empirical formula which gives us the binding energy as a function of mass number and atomic number. This Model is useful to explain nuclear fission. Next the nuclear shell model was studied. It is similar to the atomic shell model as nucleons are added to the nucleus, they fill lowest available energy levels, according to pauli principle. A proper justification for the appearance of the Magic numbers was understood. When all the protons or neutrons in a nucleus are in filled shells, the number of neutrons or number of protons is called Magic numbers. Magic number nucleus is more stable. Nuclear energy levels were plotted using computer programming for different magic numbers, also spin, parity, magnetic moment and electrical quadrapole moment were determined using this model. I am currently in the process of studying Nilsson Model which is a successful model for studying deformed nuclei and I am looking forward to write a program to generate energy levels for different nuclei using this model.

Atom and its Nucleus

An Atom is the basic building block of matter and it consists of sub atomic particles electrons (-ve), protons (+ve) and neutrons (no charge). Protons and neutrons are collectively bound by nuclear forces to form ‘nucleus’ and this nucleus is located at the center of the atom. Electrons revolve around the nucleus. Nuclear forces are stronger than the coulomb force which makes protons and neutrons stay together. Atomic general notation is given as

Mass number is given as A= Z+N. 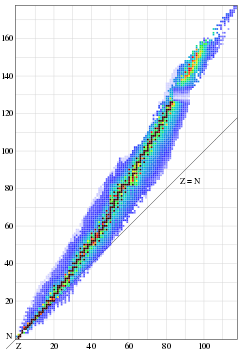 Nuclear models focus on nucleons in the nucleus that which configuration it follows while filling in orbitals, effect of charge on nucleus means quadrapole and magnetic momentum and configuration in high spin nucleus. There are several nuclear models are available some of examing below.

According to this model atomic nucleus behaves like the molecules in a drop of liquid. In the ground state nucleus is spherical, if the specific kinetic energy is added, this spherical nucleus may be distorted into a dumbbell shape and then may be split into two fragments.

Formula for binding energy is given as [1]

The first term is the volume term av that describes how the binding energy is mostly proportional to mass number A. The constant of proportionality is a fitting parameter that is found experimentally to be av = 15.5MeV [1].

The surface term, a s also based on the strong force, is a correction to the volume term. We explained the volume term as arising from the fact that each nucleon interacts with a constant number of nucleons, independent of A. While this is valid for nucleons deep within the nucleus, those nucleons on the surface of the nucleus have fewer nearest neighbors. This term is similar to surface forces that arise for example in droplets of liquids, a mechanism that creates surface tension in liquids.

The third term a c derives from the Coulomb interaction among protons and of course is proportional to Z. This term is subtracted from the volume term since the Coulomb repulsion makes a nucleus containing many protons less favorable. Constant a c can be estimated as 0.691 MeV [1].

The Coulomb term seems to indicated that it would be favorable to have less protons in a nucleus and more neutrons. However, this is not the case and we have to invoke something beyond the liquid-drop model in order to explain the fact that we have roughly the same number of neutrons and protons in stable nuclei. The shape of the symmetry term is (A−2Z). It can be more easily understood by considering the fact that this term A goes to zero for A = 2Z and its effect is smaller for larger A. From above it is clear that for smaller nuclei the symmetry effect is more important. The coefficient is a sym = 23MeV[1].

The final term is linked to the physical evidence that like-nucleons tend to pair off. Then it means that the binding energy is greater (δ > 0) if we have an even-even nucleus, where all the neutrons and all the protons are paired-off. If we have a nucleus with both an odd number of neutrons and of protons, it is thus favorable to convert one of the protons into a neutrons or vice-versa. Thus, with all other factor constant, we have to subtract (δ < 0) a term from the binding energy for odd-odd configurations. Finally, for even-odd configurations we do not expect any influence from this pairing energy (δ = 0). The pairing term is then with a p ≈ 34MeV[1].

Binding energy of carbon with atomic number 6 and neutron number 6 .

According to this model the motion of each nucleon is given by the average attractive force of all the other nucleons. As nucleons are added to the nucleus, they drop into the lowest energy shell permitted by the Pauli principle which requires that each nucleon have a unique set of quantum numbers to describe its motion. When all the protons or neutrons in a nucleus are in filled shells, the number of neutrons or number ofprotons is called “Magic numbers”. Some of the Magic numbers are 2,8,20,28,50,82,126. Like 40Ca . elements have both proton and neutron Magic numbers are called doubly Magic numbers.

The nuclear spin represents the total angular momentum of the nucleus. The nucleus is although composed of neutrons and protons but it acts as if it is a single entity which has intrinsic angular momentum (I=l+1/2 or l-1/2). Parity is the behaviour of wave function under the reflection of space coordinates through the origin determine the parity of the system. 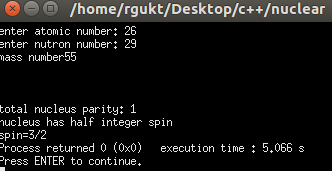 parity and spin of a nucleus with atomic number 26 and neutron number 29.

Magnetic moment for atom with atomic number 3 and neutron number 4.

Quadrapole  moment of atom with atomic number 9 and neutron number.

Shall Model for magic number generated by program.

The nuclear shell model is generally used to describe spherical nuclei but it fails to explain the properties of deformed nuclei (nuclei with N and Z far from the closed shells) and rapidly rotating nuclei. To understand the basic properties of nucleons moving in a deformed nucleus, a model was introduced by S.G. Nilsson in 1955, named as the Nilsson model. First experimental examples were found of rotational bands in nuclei, with their energy levels following the same J (J+1) pattern of energies as in rotating molecules. Quantum mechanically, it is impossible to have a collective rotation of a sphere, so this implied that the shape of these nuclei was non spherical. The Nilsson model the modified oscillator potential is used to describe the motion of the nucleons. For an axial symmetric deformation, the Nilsson Hamiltonian takes the form[3]

Here ω0 is the harmonic oscillator frequency in the spherical limit while ω z and ω⊥ are the frequencies of the anisotropic oscillator in the z-direction and the directions perpendicular to the z-direction, respectively. The first term provides the kinetic energy of the nucleons and the second term defines the quadrupole deformation dependence describing spheroidal shapes. The third term is the spin-orbit coupling and was introduced to reproduce the empirical shell gaps for different N and Z values. The last term is introduced to simulate the surface diffuseness depth, which leads to a proper single-particle ordering by lowering the energies of the large l orbitals within an N-shell.

Because the potential is not spherically symmetric, the single-particle states are not states of good angular momentum J. However, a Lagrange multiplier, known as a "cranking" term, can be added to the Hamiltonian. Usually the angular frequency vector ω is taken to be perpendicular to the symmetry axis, although tilted-axis cranking can also be considered. Filling the single-particle states up to the Fermi level then produces states whose expected angular momentum along the cranking axis has the desired value set by the Lagrange multiplier. To describe the single-particle motion in a rotating nucleus, the cranking model approximation is frequently used, which was suggested by Inglis in 1954[3]. The basic idea of the cranking model is the following classical assumption: The nucleus with an angular momentum I ≠ 0 is rotating with a fixed frequency, ω, around a principle axis. The cranking Hamiltonian is then given by

Generally these three frequencies are expressed in terms of quadrupole deformation coordinates ε2 and γ , corresponding to the different ellipsoidal shapes.[3]

The parameter ε2 gives the degree of the deformation of the nucleus, while γ gives its degree of axial asymmetry. Figure shows the values of ε2 and γ, which are used todescribe all possible ellipsoidal shapes with rotation around the three principal axes.[3] 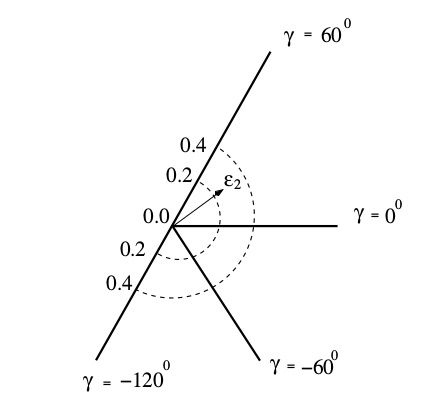 The (ε2 , γ) half plane, describing the shape and rotation axis of the nuclear potential.

Illustration of the standard flow through the computer programs used in the CNS calculations. All these names refers to the corresponding programs in FORTRAN codes. 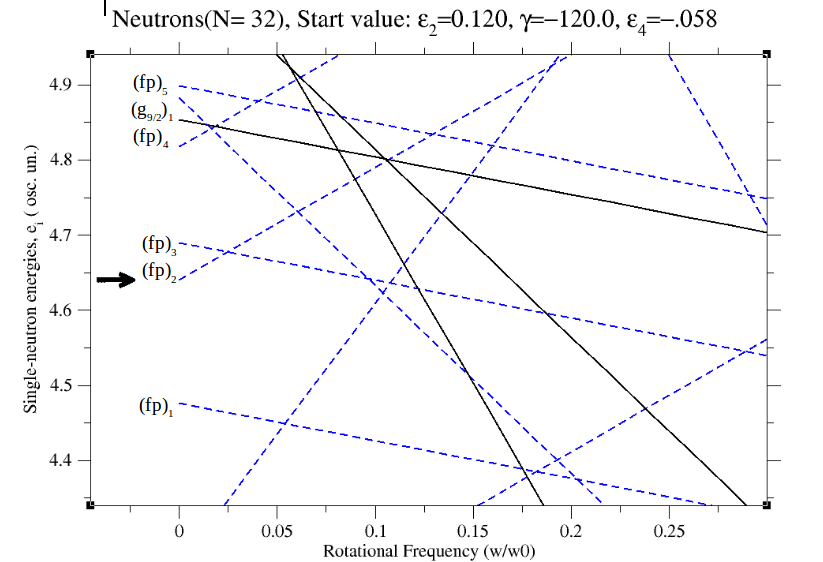 In above graph the energies are calculated at a constant deformation of ε2 = 0.120, γ = - 1200 and ε4 =-0.58. The arrow on the left hand side indicates the Fermi level for N = 32 at ω = 0. Particle numbers at some energy gaps are encircled. The orbitals are labelled by the group to which they belong and the ordering in the group at rotational frequency, ω = 0. The orbitals which are involved in a theoretical description of 62Zn include the N = 3 high-j 1f 7/2 shell, the upper low-j fp shells 1f5/2 , 2p3/2 , and 2p1/2 , and finally the N = 4 shell 1g9/2 . The j-shells are pure only if the shape is spherical. In the deformed rotating potential, these j-shells will mix. i.e., in the present approximation the wave functions of the single-particle orbitals will have amplitudes in all the j-shells of a specific N rot -shell. However, it turns out that if the deformation is not too large, these orbitals can be classified as having their main amplitudes in either the high-j intruder shell or in the other shells with smaller j-values . The orbitals are labelled according to which j-shell or group of j-shells they belong and the ordering in the group at rotational frequency ω = 0. The (fp) group indicates the mixing of the 1f5/2 and 2p3/2 subshells. It is not really possible to make a distinction between the 1f5/2 and 2p3/2 shells. The mixing probability of the 2p1/2 subshell is low for these orbitals and does not contribute significantly to the wave-functions of the upper fp shell orbits which are active in 62Zn. The large signature splitting of the lowest high-j 1g9/2 intruder orbital means that for configurations with one 1g9/2 neutron (or proton), one expects to observe only the favoured α = +1/2 signature. 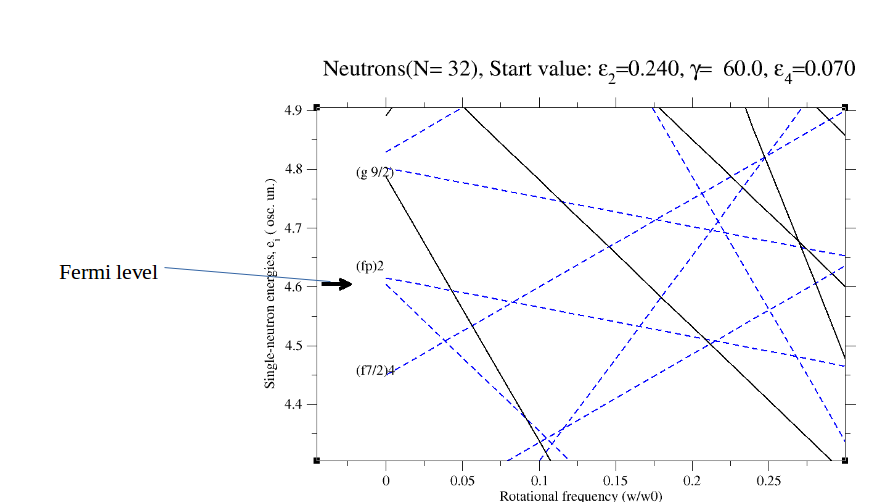 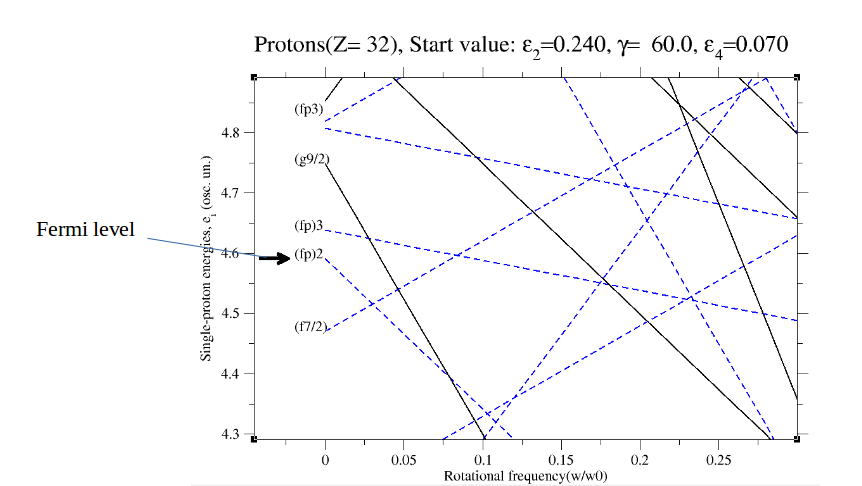 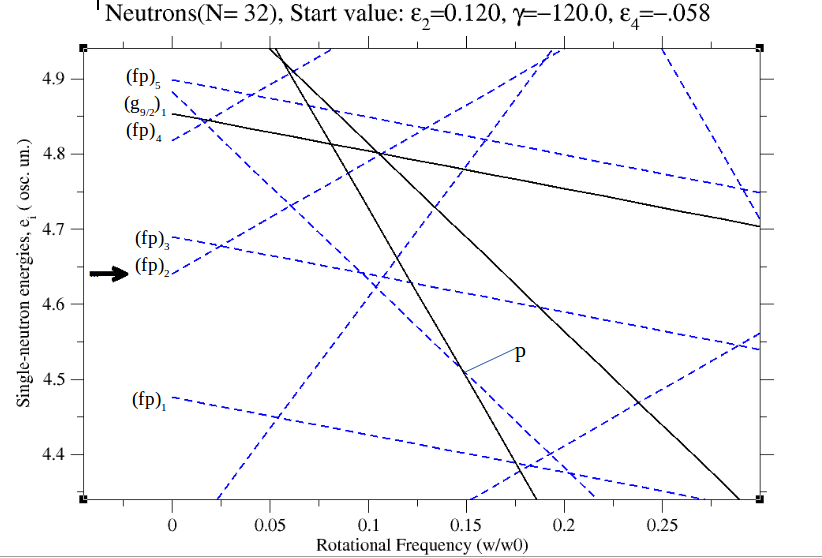 I would like to express my gratitude towards my project guide Prof. Samit Kr. Mandal for giving me this opportunity to work under supervision of him and inspired me as a personolity . I would like to express my special gratitude and thanks to Dr. Jnaneswari Gellanki for providing necessary information regarding the project , also for her support in completing the project and giving me such attention and time. My special thanks to co-interns and Phd students in lab for helping me in different aspects.