Making algal biofuels commercially viable and sustainable means decreasing greenhouse gas (GHG) emissions to attain higher yields of biomass along with biofuel precursors and other high-value bioproducts. Selenastrum capricornutum UTEX 1648 is an oleaginous green microalga belonging to the class Chlorophyceae is considered as most promising renewable feedstocks to synthesize biofuel precursors. Understanding the molecular imprints is important for elucidating the physiological mechanisms of lipid biosynthesis in this microalga when subjected to nutrient stress. Algal Oils are rich in the triacylglycerols (TAGs) that serve as material for conversion to biofuels. Studies on the biosynthetic pathways and rate limiting steps of triacylglycerol formation in microalgae are still infancy. Our present research aims to study the overall TAG biosynthesis pathway i.e., either altering the lipid content with increase in overall lipid production or shift the balance of lipid production when subjected to nutrient stress. In this context, our focus was to study S. capricornutum under nutrient deprivation. We have initiated our experiments to find out their molecular responses on growth and lipid profiles under different nutrient limitation (nitrogen, phosphorous, and/or sulfur) conditions. Our preliminary data (as per 4-week work plan) shows that the microalgae was grown for 10 days at 24°C, under 60 µmol photons m-2s-1with continuous illumination, and with shaking at approximately 100 rpm. Under these conditions, the doubling time is 59.9 h; the specific growth rate, 0.27 ; the biomass concentration, 235.0 mg L-1; and the biomass productivity, 23.5 mg L-1. We have also analysed the dry cell weight of cells employing standard protocols and was found to be 13.21 µg per 106cells. Currently, we are growing cells to determine the effects of nutrient deprivation on the growth of S. capricornutum at 24°C, 60 µmol photons m-2s-1with continuous illumination as per these following conditions: BG-11 as control, BG-11 lacking nitrate [N-], BG-11 lacking phosphate [P-], BG-11 lacking sulphate [S-]. In conclusion, the best condition among all with better biomass and higher lipid productivity in S. capricornutum, may be a critical step toward making algae-derived biofuels economically competitive for industrial production.

Selenastrum sp. is a crescent-shaped, freshwater green microalgae belonging to Chlorophyceae family. It is an oleaginous microalga which has the potential to be used as an ecotoxicological bioindicator and bioremediation. It can be used for the removal of aromatic hydrocarbons, phenolics, dissolved organic nitrogen [3, 5, 6, 7]. In this study, the rationale is to understand the effects of nutrient deprivation i.e. nitrogen (N), phosphorus (P) and sulfur (S) on the growth profiles and physiology of Selenastrum. This preliminary analysis will help us to gain insights into the lipid metabolic pathways for further understanding the deviation in the carbon flux upon different nutrient stress. Further, we might be able to generate a model which can be a potential feedstock for both bioremediation and biofuel production.

Objective of the Research

Usage of fossil fuels have serious consequences towards health and environment; extraction process can wreak havoc on ecosystems and communities, transportation can lead to serious accidents and spillage, burning of these fuels will release toxic substances and contribute to global warming. Rapid urbanization will increase the global energy demand by 53% at the end of 2035. Therefore, there is an increasing pressure for the development of renewable and sustainable fuels. The 2nd generation biodiesel from oil crops like corn, soyabean, jatropa are unfortunately not able to replace fossil fuels as they complete with agricultural land and do not produce economically sufficient biofuel.

Microalgae comparatively have a lot of advantages in being used to produce biofuels. Microalgae are highly diverse, photosynthetic autotrophs, that have rapid growth with high biomass and are found in marine/freshwater systems thus eliminating the need to complete with arable land [2]. According to the US department of energy, microalgae have the capability to produce 100 times more oil per acre land than any other terrestrial plant. [1] They are also capable of growing in wastewater and can be used for bioremediation. Since they are photosynthetic, they could also be used to sequester the greenhouse gas CO2 while simultaneously being used for the production of biofuel precursors. Some microalgae can also produce certain high value precursors like omega-3fatty acids (Eicosapentaenoic acid and Docosahexaenoic acid), carotenoids, phycobiliproteins etc. Microalgae can be used to produce different types of renewable fuels such as biodiesel, ethanol, hydrogen, methane etc.

Despite the advantages of using microalgae as a potential source for biofuels, they are not yet commercialized as there is a need for selection of the most economical strain, developing bioreactors for large scale production, optimizing culture, harvesting and downstream conditions. Culturing conditions such as nutrient content, salinity, pH, temperature, light exposure are some factors which affects the biochemical composition of a cell as well as its biomass accumulation. Microalgae have the ability to produce neutral TAG lipid bodies during stress conditions. These TAG depositions are then trans esterified and converted to biofuels. Nutrient deprivation is the most commonly used strategy as it has a significant effect on TAG content and fatty acid composition. However, a major drawback to nutrient deprivation is that the growth rate slows down which ultimately will make the process less economical [8]. High cellular lipid content and biomass concentration are the most important criteria towards selection of a strain for commercialization. Hence, different strains have to be tested under nutrient deprivation to find out the best strain for commercialization which can produce high TAG content without drastic decrease in growth rate [8].

Selenastrum capricornutum is a sickle shaped freshwater green microalgae belonging to the class Chlorophyceae. It is most commonly used for bioremediation of pollutants such as polycylic aromatic hydrocarbons, phenolics, heavy metals and certain pharmaceutical compounds. The rapid growth of industrialization, urbanization and agriculture has led to increased generation of toxic waste products which are dumped in the nearby water bodies. These pollutants can have disastrous effects on the ecosystem. Some pollutants can bioaccumulate and can directly be harmful to our health. Microalgae are capable of bioadsorption, bioaccumulation and/or biodegradation of pollutants. S. capricornutum has been effectively used for biodegradation of nonlyphenols, a type of phenolic compound used in surfactants. It has also been used for treatment of polycyclic aromatic compounds such as benzo(a)pyrene, phenanthrene, fluoranthene, [7] pyrene etc. Some pharmaceuticals which can be degraded by S. capricornutum include finasteride [5]; estradiol and 17-alpha ethynylestradiol with efficiency of 88-100% and 60-95% respectively [6]; cyclophosphamide and ranitidine, ciprofloxacin and sulfamethoxazole [3]. S. capricornutum has also been used as an ecotoxicological bio-indicator for detection of heavy metal such as Cu2+, Pb2+, and Cr3+ with 67 to 98% efficiency.

In this study, the rationale is to understand the effects of nutrient deprivation i.e. nitrogen (N), phosphorus (P) and sulfur (S) on the growth profiles and physiology of S. caprinornutum. This preliminary analysis will help us to gain insights into the lipid metabolic pathways for further understanding the deviation in the carbon flux upon different nutrient stress. Further, we might be able to generate a model which can be a potential feedstock for both bioremediation and biofuel production

Selenastrum capricornutum UTEX 1648 was obtained from Culture Collection of Algae, University of Texas, Austin and maintained at International Center of Genetic Engineering and Biotechnology, New Delhi. Cultures were incubated under continuous illumination (~30 μmol m−2 s−1 photosynthetically active radiation [PAR]) on an orbital shaker (100rpm) at 25˚C. They were grown for 10 days in BG-11 medium. The composition of media components for BG-11 medium (g/L): K2HPO4—4; MgSO4.7H2O—7.5; CaCl2.2H2O—3.6; citric acid—0.6; FeC6H5O7NH4OH—0.6; EDTA—0.1; Na2CO3—2.0; NaNO3--150; Trace metals—1ml/L. These precultured cells were collected by centrifugation and resuspended in regular BG-11 medium, BG-11 medium lacking nitrogen, phosphorus and sulfur for control, N-, P-, S- conditions respectively. The cell density of the inoculum was 5 x 106 cells/ml. Samples were taken out immediately after resuspension (0 day) and at intervals of 2, 4, 6, 8, 10 days for biochemical analysis. All the experiments were done in biological replicates. Cell growth was monitored by counting cells with hemocytometer and absorbance reading at 750nm. The growth rate was calculated by the following equation.

The doubling time was also calculated as per the following equation once the growth rate was known,

A known biomass of cells was centrifuged at 5000 rpm for 10 mins and 2-3 washes were given first with milliQ water and then with 500 μl of 0.5 (NH4)HCO3. The cells were resuspended in 500 μl of milliQ and added to pre-weighted dry crucibles. The weight was noted down and the crucibles were kept in the hot air oven at 80˚C for 4 hours. These crucibles were then kept in a muffled furnace at 600˚C for 1hr for measuring the ash free dry weight.

The standard lipid stock used was canola oil (2 mg/ml) in chloroform. Dilutions of the stock were prepared and heated at 60˚C for 10 mins to evaporate the chloroform and 100 μl of water was added to the standard solutions. A known biomass of cultures was centrifuged at 8000 rpm for 10mins and resuspended in 100 μl of water. 2ml of concentrated H2SO4 was added to the samples and heated at 100˚C for 10 mins and cooled for 5 mins in an ice bath. 5ml of freshly prepared SPV reagent was added and incubated at 37˚C for 15mins. The absorbance was taken at 530nm.

A known biomass of cultures was centrifuged at 8000 rpm for 10 mins and resuspended in 1ml 100% methanol and heated at 60˚C for 1hr. The absorbance was taken at 470, 652, 665 nm for carotenoids, chlorophyll b and chlorophyll a respectively.

Nitrogen, phosphorus, sulfur are all major macronutrients required for normal cell metabolism and growth. Thus under nutrient starvation, the growth rate will slow down and more inorganic carbon will be used for production of lipids. Biomass production and lipid biosynthesis both compete for inorganic carbon. Hence, lipid is known as the storage body. The growth of Selenastrum caprinornutum subjected to nutrient replete (control) and nutrient deprived conditions of nitrogen, phosphorus, sulfur in BG-11 medium is shown in figure 1. under all conditions, there was an initial lag phase followed by an exponential phase. The cell growth under deplete conditions was greatly reduced as compared to the control. Cell growth under nitrogen starvation was affected the most. The biomass productivity and dry cell weight of S.capricornutum under control conditions is 23.5 mg/L/day and 13.36 (μg/106cells). The specific growth rate and doubling time for all the conditions are given in table3. 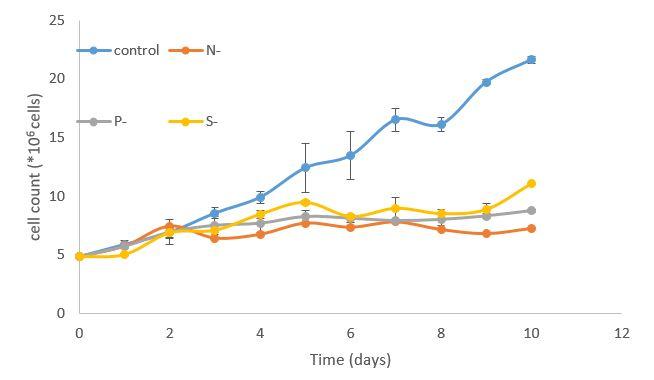 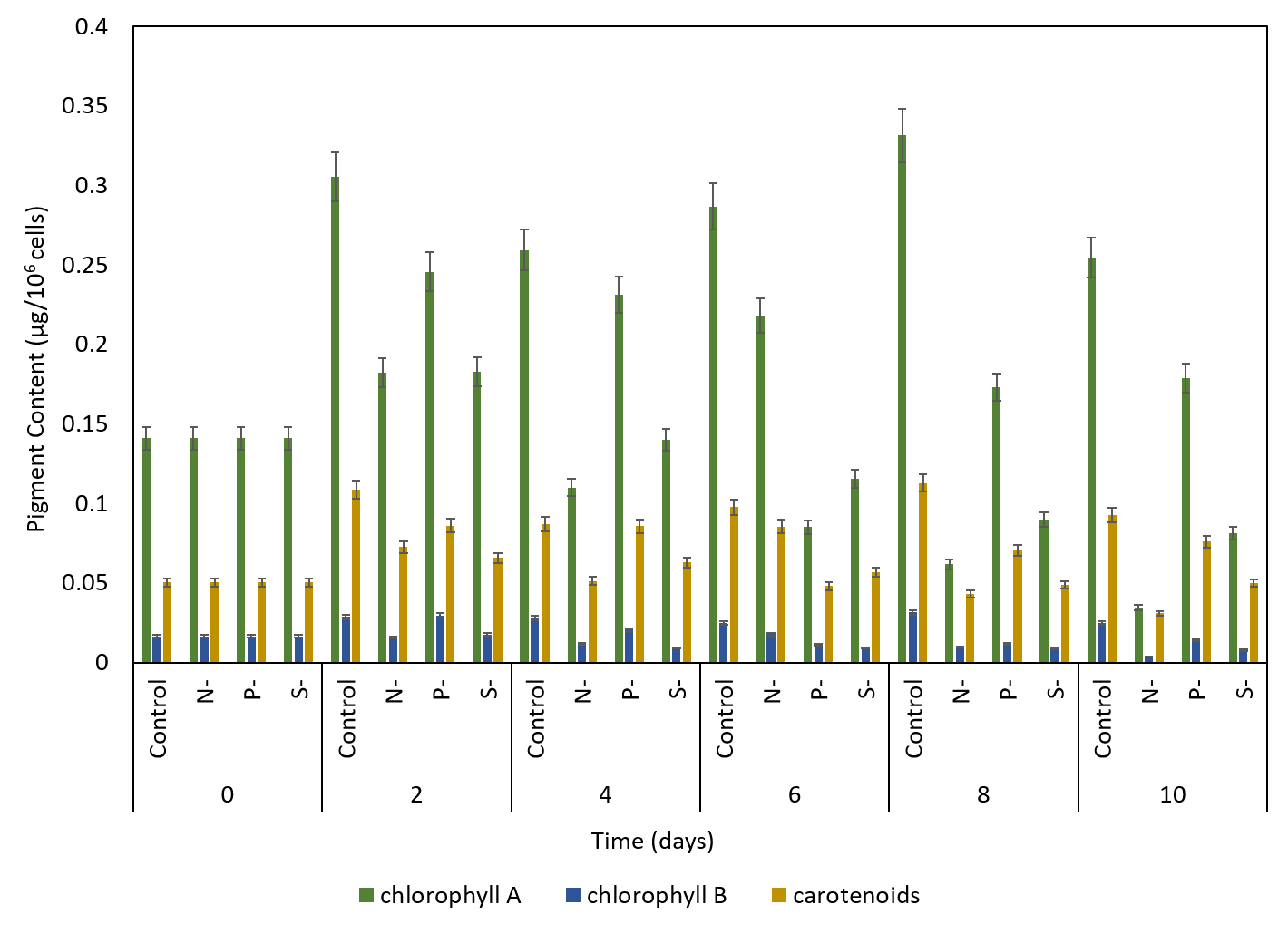 Under stress conditions, the ratio of reduced to oxidized metabolites cannot be maintained and there is a shortage of NADP+ and ADP. The biosynthesis of lipids utilizes NADPH and ATP to produce NADP+ and ADP and thus replenishes the pool. Hence, during stress conditions, the lipid content increases gradually. Among all the nutrient starvation conditions, nitrogen deplete showed the highest accumulation of lipid bodies in the cells. Under this condition, inorganic carbon directed towards production of lipids. However, under phosphorus and sulfur deprivation, the lipid content remained constant. 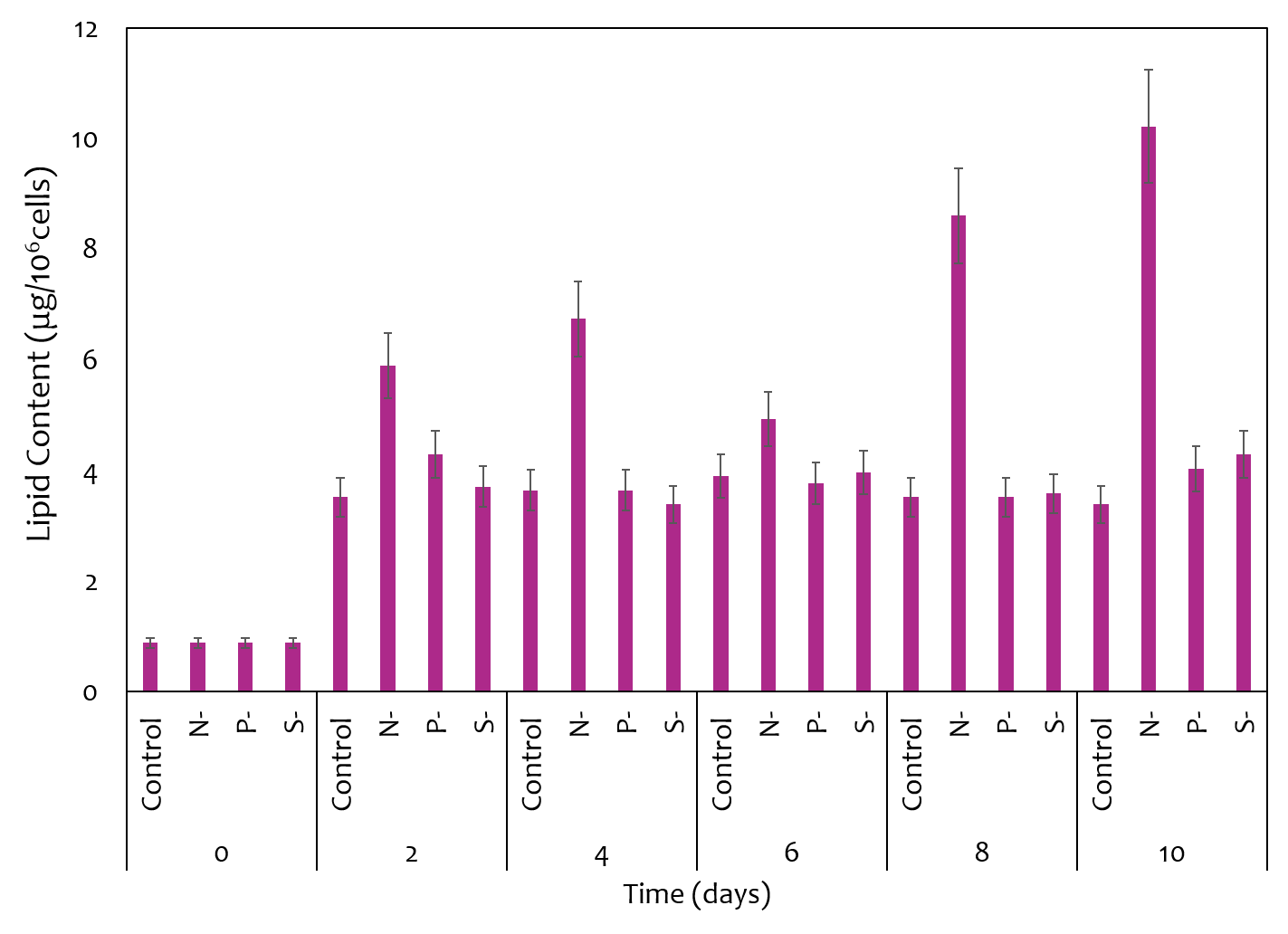 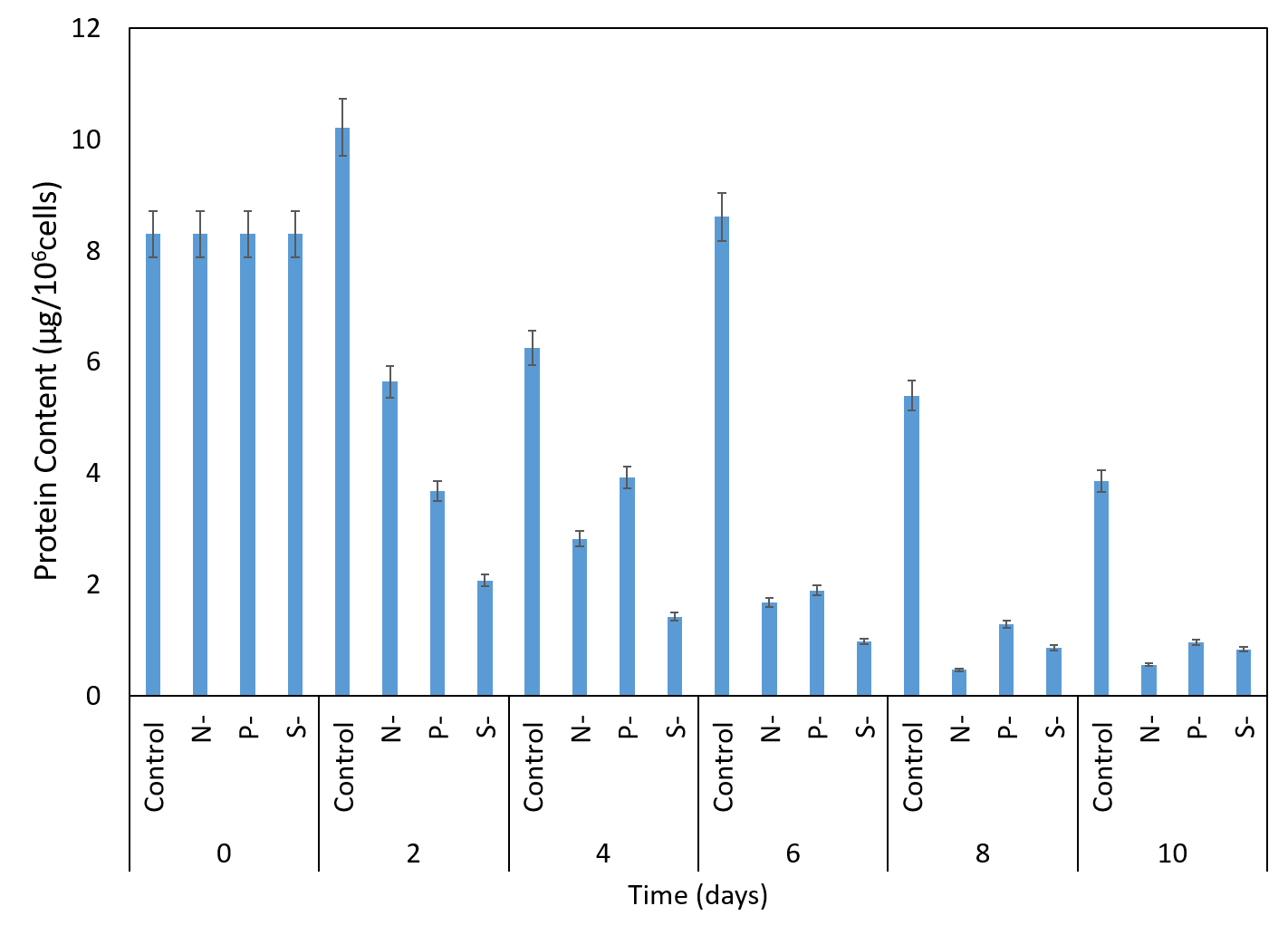 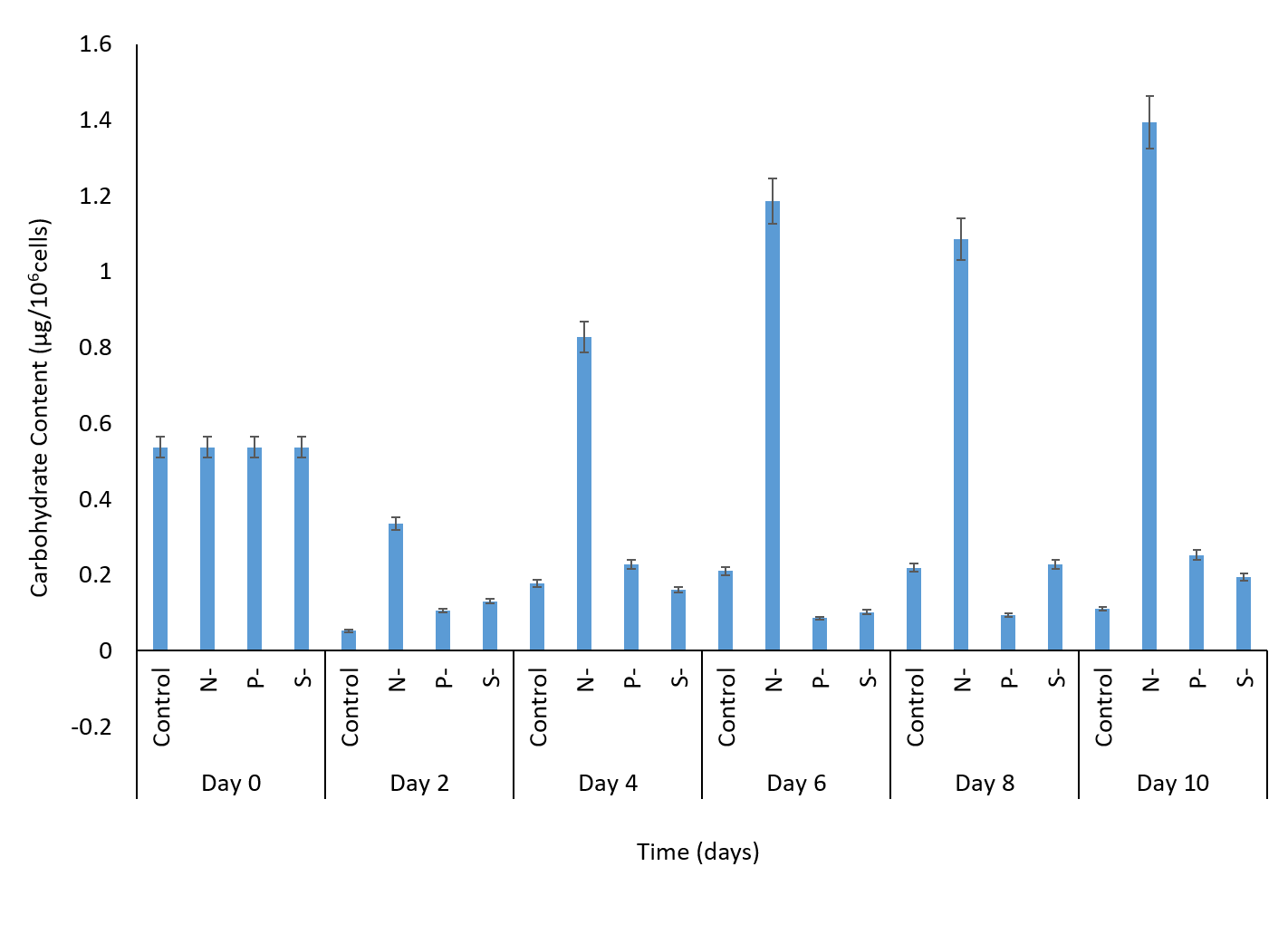 Lipid bodies are dynamic organelles which store neutral lipids. Neutral lipids consist of TAGs (triacylglycerols) which can be transesterified and processed to biofuels. BODIPY (4,4-difluoro-1,3,5,7,8-pentamethyl-4-bora-3a,4a-diaza-s-indacene) is a fluorescent neutral lipid dye which bind to the neutral lipid bodies and show fluorescence. BODIPY staining is preferred over nile red staining because BODIPY dye is insensitive to environmental polarity. solvents like DMSO, ethylene glycol etc can be used to improve the staining. At excitation wavelength of 488nm, the lipid bodies can be visualized as green droplets. The dye also stains the chloroplast red. Under nitrogen deprivation condition, lots of lipid bodies can be visualized compared to the control. Cells grown in phosphorus and sulfur deprivation conditions show lesser lipid bodies than nitrogen but more than the control. This is verifiable by the SPV assay data. 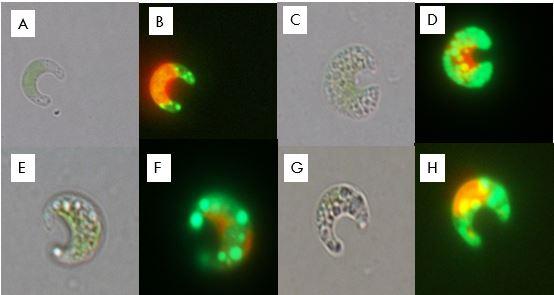 I would like to thank my supervisor, Dr. Pavan P. Jutur and the Omics of Algae group, ICGEB. I would also like to thank Indian National Science Academy (INSA) for the fellowship.