Active galactic nuclei (AGN) are one of the brightest objects in the sky and they are believed to be powered by the accretion of matter onto super massive black holes situated at the centres of galaxies. About three decades ago Osterbrock and his group identified a new group of active galactic nuclei called Narrow Line Seyfert 1 (NLSy1) galaxies. They have narrow emission lines in their optical spectra compared to broad line Seyfert 1 galaxies. In addition to that, they have excess emission in their soft X-ray spectra and they are also known to show strong X-ray variability. In this project, we aim to understand the peculiar X-ray properties of Narrow Line Seyfert 1 galaxies, using data from the XMM-Newton satellite which was launched by the European Space Agency (ESA) in 1999. For the purpose of this project, I have selected a source named PG 1244+026. We have reduced the data and extracted the lightcurves and spectra corresponding to both source and background regions. We have also done spectral fitting using the clean spectra and tried to characterize the X-ray variability and spectral properties of PG 1244+026.

Active galaxies are galaxies with an extremely luminous central region emitting radiations over the entire range of the electromagnetic spectrum. The central region is often more luminous than the total luminosity of the rest of the galaxy. Active galactic nuclei are powered by central supermassive black holes (BH) whose mass lies in the range 1016 -1010 M⊙​. The superamassive black hole is surrounded by a gaseous accretion disc which is a few light days across. The broad line region of AGN corresponds to fast moving gas clouds at a distance of ~100 light days from the centre. The narrow line region corresponds to small, low density gas clouds moving at lower velocities at a distance of ~1000 lightyears from the centre. In many AGNs emission is collimated into jets whose direction of propogation is perpendicular to the accretion disc plane. AGNs are classified into several categories, one of which is based on radio emissions. The radio loud AGNs produce radio jets and lobes and a significantly large part of the total emission is due to the jets. Radio loud AGNs are typically found in elliptical host galaxies whereas radio quiets are associated with spiral hosts.

Quasars are the most luminous among all the subclasses of AGNs. Their spectra is quite similar to those of Seyferts, except that quasar spectra have weak or absent stellar absorption features and their narrow lines are weaker than the broad lines of Seyferts. Low-ionization Nuclear Emission-line Region galaxies (LINERs) are spectroscopically similar to Seyfert 2 galaxies except that they show relatively strong low ionization lines. 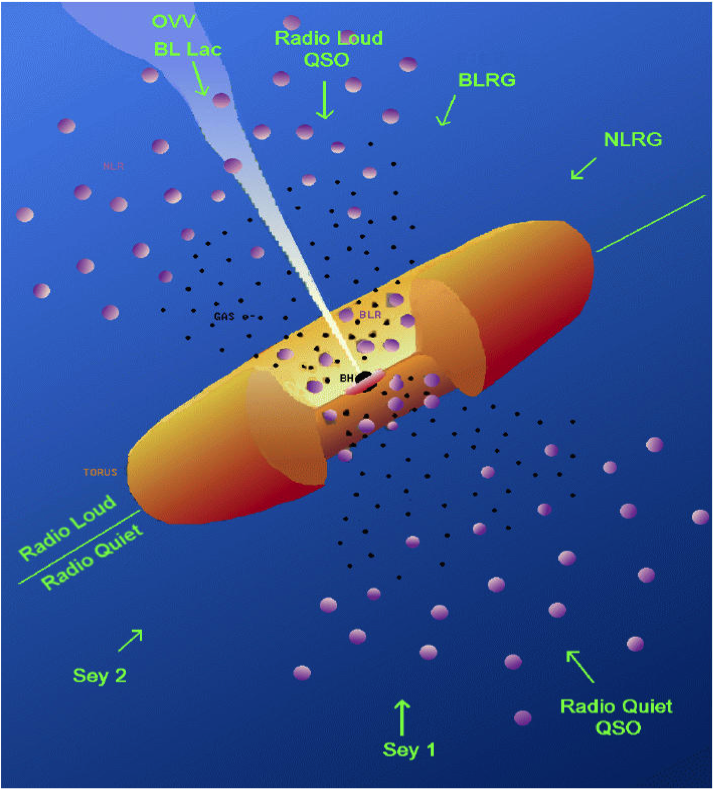 About 15-20% of all AGNs have been observed to be radio loud. Radio loud AGNs are further classified into Blazars and Radio galaxies. The appearance of active galactic nuclei depends so strongly on orientation that our current classification schemes are dominated by random pointing directions instead of the more interesting physical properties (Urry and Padovany 1995). ​​

For this project we have studied the X-ray spectral and variability properties of the narrow line Seyfert 1 galaxy PG 1244+026 using the data collected by the X-ray space observatory XMM Newton. XMM Newton short for X-ray Multi mirror mission was built by the European Space Agency and was launched on December 10, 1999. The European Photo Imaging camera (EPIC) carries two MOS-CCD cameras used to detect low energy X-rays and one PN-CCD camera used to detect high energy X-rays.

1.2 Statement of the Problems

We selected the source PG 1244+026 which is a narrow line Seyfert 1 galaxy to understand the origin of the steeper soft X-ray continuum slope in the spectrum.

This source has been previously selected as one of the brightest unobscured type 1 AGN with both XMM–Newton and SDSS spectra (Jin et al 2012).

In this project we have tried to understand the spectral and variability properties corresponding to all the eight observations as recorded by XMM-Newton.

1.3 Objectives of the Research

1. To characterize the X-ray variability properties of the narrow line Seyfert 1 galaxy PG 1244+026.

Narrow Line Seyfert 1 (NLSy1) galaxies were classified as a special class of active galactic nuclei by Osterbrock and collaborators about 30 years ago. NLSy1 spectra show narrow emission lines and generally steeper soft X-ray continuum slopes. The full width half maximum of Hβ line is less than 2200. For NLSy1 galaxies the balmer lines of hydrogen are only slightly broader than the forbidden lines, emission lines of Fe II or higher ionisation iron emission lines are often seen in the spectra and the ratio of O3 5007A to Hβ is less than 3.

NLSy1 are found in spiral host galaxies powered by low mass black holes. They were originally believed to be radio-quiet but it is now known that about 7% of all observed NLSy1 are radio loud.

Interest in the study of NLSy1 galaxies has been renewed in the past few years owing to the detection of gamma rays in about 6 NLSy1 galaxies as studied from observations collected by the Fermi gamma-ray space telescope. Detailed studies of these observations have produced enough evidence to support the claim that the gamma ray emitting NLSy1 galaxies are similar to blazars in their general properties.

This has led to the development of new arenas in the study of NLSy1 gaaxies.

Through the study of data collected by ROSAT, it has been found that NLSy1 galaxies have remarkable X-ray properties. (Boller, Brandt and Fink 1996).

The X-ray spectra of NLSy1 galaxies are often much softer than those of Seyfert 1 galaxies with broader lines. NLSy1 galaxies can exhibit rapid and giant amplitude variability. (​Boller 1997​)

We selected the narrow line Seyfert 1 galaxy PG1244+026 as our sample and the data was obtained from NASA’s High Energy Astrophysics Archive Research Center (HEASARC). The data consisted of eight observation ids corresponding to different exposure durations and we have done the data reduction for seven of the eight observation ids. The two softwares I used for the purpose are HEASOFT and SAS. HEASOFT 6.24 provided by NASA’S HEASARC is an unified release of the FTOOLS and XANDAU software packages which are used for X-ray astronomical spectral, timing, imaging analysis and manipulaton of FITS files. The Science Analysis System software version 17.0.0 was used for basic XMM-Newton data reduction. Data from XMM consists of ODF and PPS. The Observation Data Files (ODF) contain raw data and need to be reprocessed. The Pipeline Processing System(PPS) contains pre-processed data. Before creating event files correct environment is set for analysis, by creating cif and by defining SAS_CCFPATH, SAS_CCF and SAS_ODF. The data from all three cameras (PN, MOS1 and MOS2) have been used reduced, although only the data from PN camera was used for analysis. The source and background regions were extracted from the image. The source extraction region was chosen to be circular with a radius of 20 arcsec for each EPIC camera. The background region was chosen to be circular with a radius of 25 arcsec in the case of PN and 20 arsec for MOS as far as possible from the source. The corresponding lightcurves were obtained and in the case of high flares in the background lightcurve, rate filters were applied. We selected data with PATTERN ≤ 12 for MOS1 and MOS2, and PATTERN ≤ 4 for PN. Spectra were extracted from source and background regions separately. The areas of source and background were calcualated using backscale. The detector response was reformatted by making a redistribution matrix file (RMF) and ancillary response file (ARF) using RMFGEN and ARFGEN. The source and background spectra were then grouped together using SPECGROUP. The clean spectra generated was used for spectral fitting.

In the case of 0675320201, data reduction could not be performed as we were only interested in the analysis of PN data and the PN data files were missing.

Lightcurves display the variation of the brightness of a source with time. In order to calculate Fvariance, lightcurves were plotted in three energy bands: 0.3-1.0 kev, 1.0-2.0 kev and 2.0-10.0 kev. The source extraction region was again selected to be circular with a radius of 20 arcsec and the background extraction region was a circle of radius 25 arcsec . LCMATH in FTOOLS was used to subtract the background lightcurve from that of the source. The corrected lightcurve was used to calculate the variability amplitude. We have only used the data from PN camera for analysis.

where S2 is the sample variance, x the arithmetic mean of xi and σ2err​​the mean square error, given by:

The uncertainty in Fvar is given by:

Spectral fitting for the clean spectra was done on xspec v.12.10.0. We have tried the following combinations of models for fitting:

Wabs uses Wisconsin cross-sections and accounts for photoelectric absorption. Zwabs permits us to specify the redshift of the source. For our source, the redshift was found to be 4.81780x10-2 and was frozen at that value. Pow is a simple power law model and bbody is a blackbody spectrum model. Nthcomp gives the shape of the continuum from thermal comptonisation. It accounts for both high and low energy rollovers and is also parametrized by the temperature of electron(kTe) and seed photons(kTbb). Comptt is an analytical model developed by Titarchuk. It describes the comptonization of soft photons in a hot plasma and also includes relativistic effects. (Titarchuk 1994) 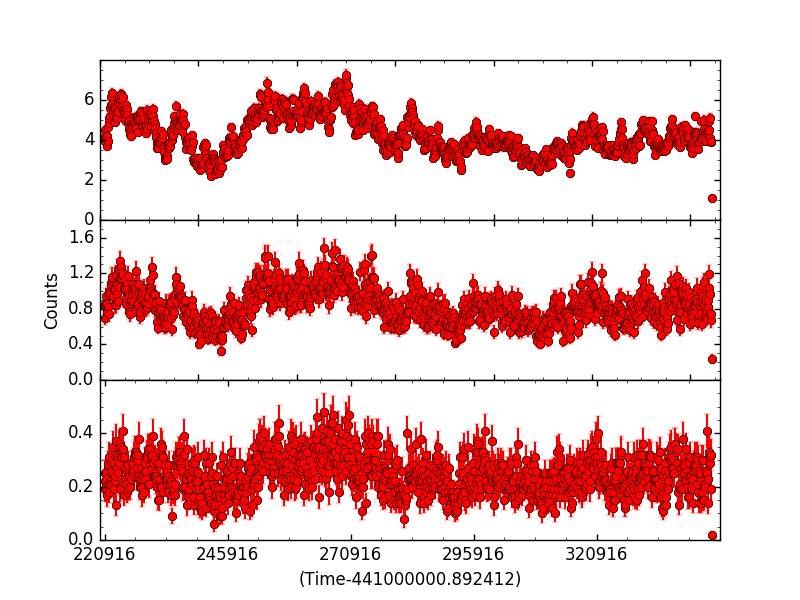 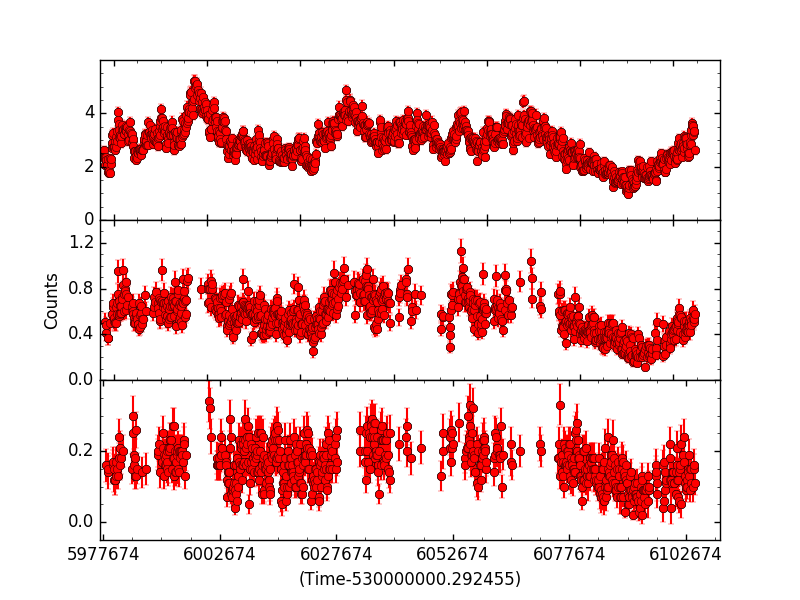 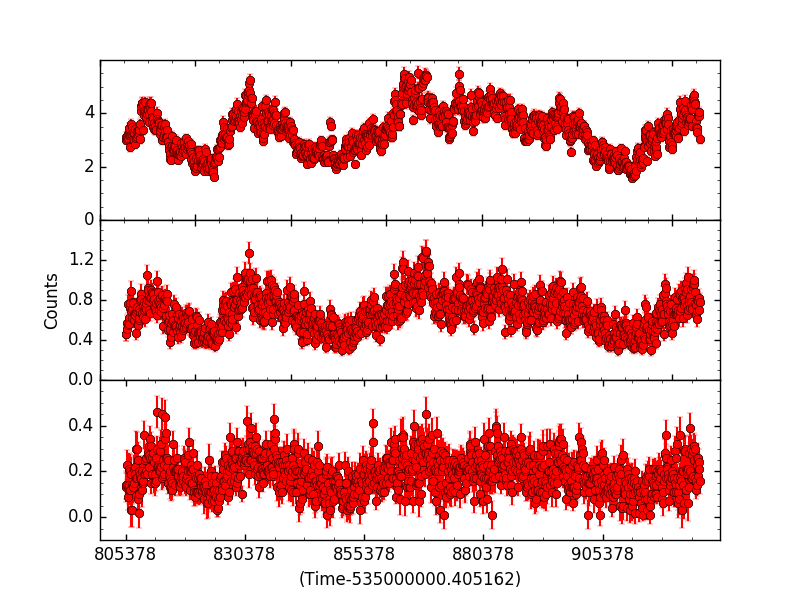 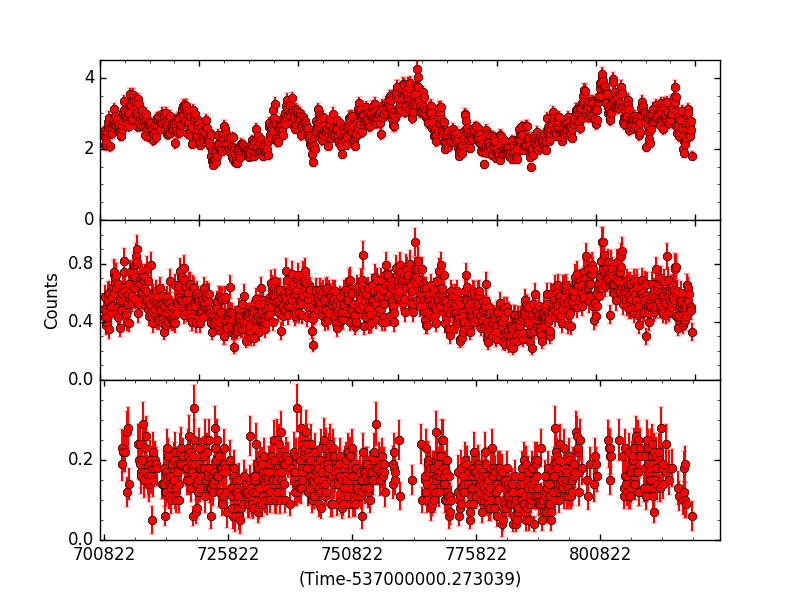 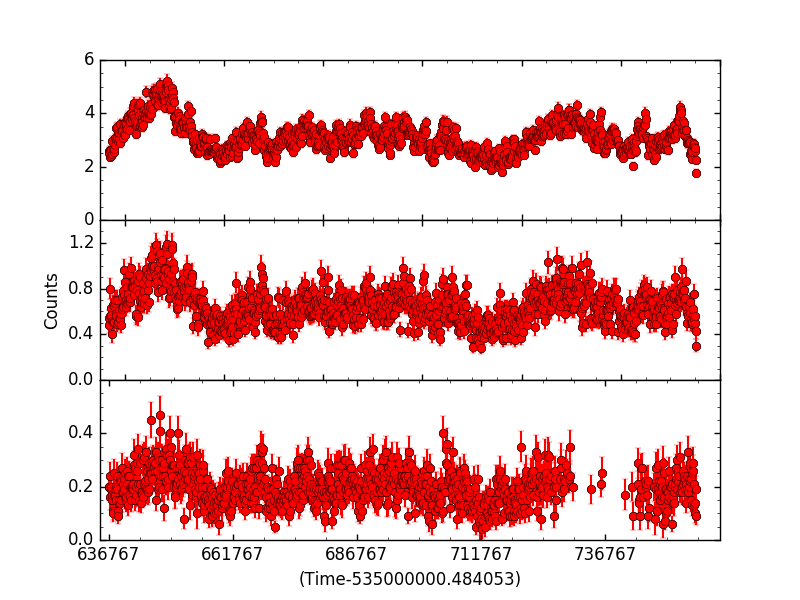 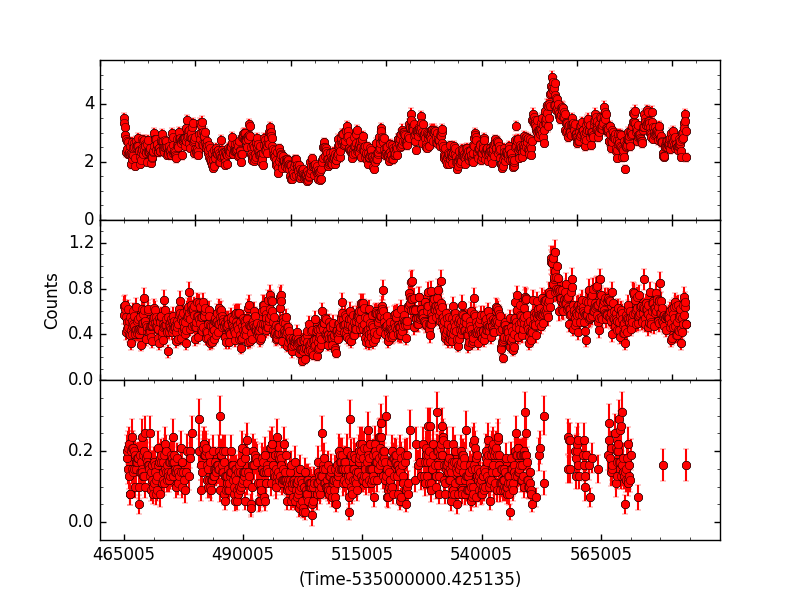 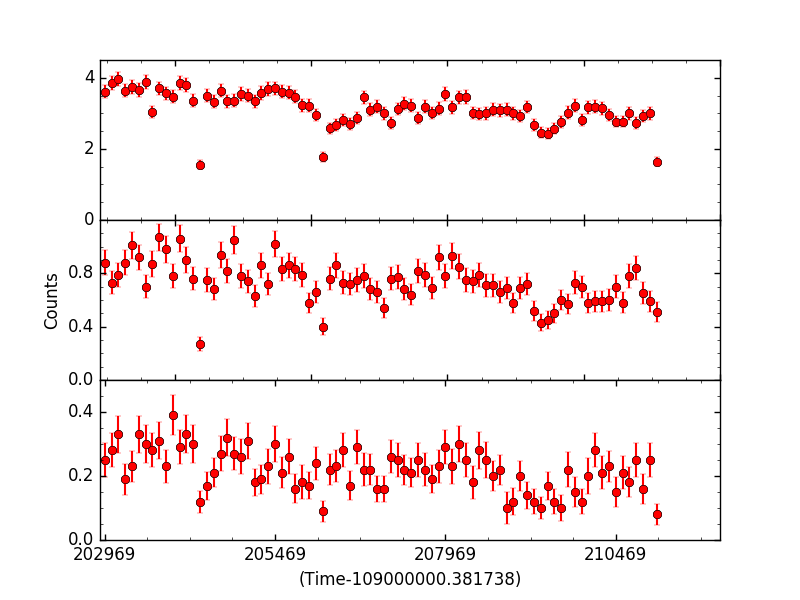 ∙ Through lightcurve analysis we have found that the source is variable for all the observattion ids analysed.

∙ Through spectral fitting using the different models specified, we have calculaed the coronal temperaturre.

I would like to thank Indian Academy of Sciences for giving me this wonderful opportunity of working at Indian Institute of Astrophysics. This research internship has been a wonderful learning experience.

I am extremely grateful to my guide Prof. C. S. Stalin, whose insight, encouragement and supervision have been invaluable.

I would also like to thank Ms. Priyanka Rani, Indian Institute of Astrophysics for her constant support and for patiently answering my questions even though they were innumerable.