Synthesis of Molybdenum disulfide (MoS2) layers using the chemical vapor deposition (CVD) technique and study of their vibration properties were carried out in this project. The MoS2 is an inorganic compound of Mo and S atoms. This compound belongs to the metal dichalcogenides (TMDs) family. The TMDs are the layered materials, and the weak Van der Waals forces bind these layers. Importantly, the TMDs possess the band gap in contrary to the graphene. Among the TMDs, MoS2 is the most studied material as compared to the other TMDs. Each sulfur center is pyramidal and is connected to three Mo centers. In this way, the trigonal prisms are interconnected to give a layered structure, wherein Mo atoms are sandwiched between layers of sulfur atoms. The CVD is a promising technique for large scale synthesis and, moreover, it is a commercially viable technique. The CVD process involves the deposition of solid materials at high temperature as a result of chemical reactions among the gaseous precursors. In this project, we proposed to grow the few-layer MoS2 by CVD technique using MoO3 and S as the precursor materials. Subsequently, vibrational properties of these layers were evaluated using Raman spectroscopy. In addition, layer-dependent luminescence properties were explored using photoluminescence spectroscopy.

Graphene, which is a typical two-dimensional (2D) layered material, has experiment its brilliant age since it is first mechanically exfoliated from three-dimensional graphite in 2004. Many strikingly highlighted properties, such as its high transparency, high thermal conductivity at room temperature, high electrical conductivity, high Young’s modulus and high specific surface area have been identified in monolayer graphene for various applications, including transparent electrodes, energy storage, and solar cells.1, 2 Graphene is a semimetal. In other words graphene is a gap less material. As a result, graphene possesses the limitations towards the optoelectronic applications. Recently, researchers have been refocusing on graphine-like 2D materials aiming at overcoming the limitations of graphene and broadening its range of applications.3-5 In this context, transition dichalcoginides (TMDs) are attracted a great deal of attention because of their layered structures and semiconducting properties. Among the TMDs, molybdenum disulfide (MoS2) is one of the most studied layered transition metal TMDs. Bulk MoS2 is indirect band semiconductor. However, indirect band gap to direct band gap transition is observed as the thickness reduced to few layers. This property of MoS2 is largely compensating the limitations of gapless graphene. Thus, this observation opens the possibility of semiconducting 2D materials to be in the next generation switching and optoelectronic devices.6

Objectives of the project

The CVD is a promising technique for large scale synthesis and, moreover, it is commercially viable technique. In this project, we propose to grow the few-layer MoS2 in CVD technique using MoO3 and elemental S as the precursor materials. Subsequently, vibrational properties of these layers are evaluated using the Raman spectroscopy. In addition, luminescence properties are also explored using photoluminescence (PL) spectroscopy.

MoS2 belongs to the hexagonal layered system and exhibit semi-conducting properties. The widely recognized MoS2 crystal structures are 1T, 3R and 2H. Monolayer MoS2 with trigonal prismatic polytype is found to be semiconducting (referred to 2H), while that with octahedral crystal symmetry configuration (referred to 1T) is metallic similarly to graphene.7 Generally, each layer has a thickness of ~ 0.65nm.8 Chemical stability, anisotropy and anti photo corrosion properties of MoS2 are attributed to the unique lamellar structure. The monolayer of the MoS2 consists the two hexagonal layers of S atoms and one intercalated hexagonal layer Mo atoms. The Mo atom in the intercalated layer bonds with the two S atoms in a trigonal prismatic fashion and the covalent bonds tightly hold these atoms. The layers of MoS2 are stacked by the weak Van-der walls force. The Mo-S bond length, the crystal lattice constant, and the distance between the upper end lower sulfur atoms are 2.4, 3.2, 3.1 Å, respectively.

MoS2 is the most stable transition metal dichalcogenides. For bulk 2H-MoS2 crystal have four Raman active modes such as E22g, E1g, E12g, and A1g. Among the four Raman active modes E22g and E1g cannot be detected because of selection rules for our scattering geometry and limitation of Rayleigh rejection filer, respectively. Bulk 2H – MoS2 crystal exhibits a strong in-plane vibrational mode at ≈384 cm-1 which is corresponding to the E1­2g mode. In addition, it also exhibit out of plane vibrational mode at ≈407 cm-1 which correspond to A1g mode of 2H – MoS2 crystal. The E12g phonon mode blue shifts, while the A1g modes have an opposite trend when going from bulk MoS2 to monolayer layer because of the large dielectric screening of Coulomb interaction among the layers.8 Thus, the frequency difference of these phonon modes has been utilized for the estimation of the number of layers in the system. 8

The chemical vapor deposition (CVD) process involves the deposition of solid materials at high temperature as a result of chemical reactions among the gaseous precursors. The deposition involves homogeneous gas phase reactions and heterogeneous chemical reactions which occur on the vicinity of a heated substrate surface. CVD is a relatively mature technique. The unique feature of CVD over other deposition capability has allowed the coating of complex shape engineering components and the fabrication of nano-devices, carbon-carbon composites and ceramic matrix composite. The versatility of CVD had led to rapid growth and it has become one of the main processing methods for the deposition of thin films and coatings for a wide range of applications, including semiconductors for microelectronics, refractory ceramic materials used for hard coatings, fiber production and fiber coatings.11

The MoS2 layers were grown on Si/SiO2 substrate using the atmospheric pressure chemical vapor deposition (APCVD) technique. For the formation MoS2 phase, molybdenum trioxide (MoO3, 99.97% Sigma Aldrich) and atomic sulfur (S, 99.5% Sigma Aldrich) were used as the precursor materials. The growth was carried out in a 3-inch quartz tube reactor using the three-zone furnace. Alumina boats containing the S powder (40 mg) and the MoO3 powder (15 mg) were kept in two extreme zones which were maintained at the temperatures of 160 oC and 850 oC, respectively, during the growth process. The reactor was evacuated to the base pressure of 1 ×10-3 mbar and retained at the same base pressure until the set temperature reached. The ultra-high pure Ar carrier gas was used as the carrier gas with the flow rate of 10 sccm. Typical experimental setup is show in the Fig. 1a. The photograph of the 3-zone furnace is shown in Fig. 1b.

1
1 a) Schematic block diagram of CVD experimental setup, b) Photograph of the 3-zone furnace used for the growth of MoS2 layers

Raman spectroscopy is a spectroscopic technique used to study the vibrational, rotational, and other low-frequency modes in a system. It relies on inelastic scattering of monochromatic light, usually from a laser in the visible, near infrared, or near ultraviolet range. The laser light interacts with molecular vibrations, phonons or other excitations in the system which results in a shift in the energy of the scattered light. The shift in energy gives information about the vibrational modes in the system.12

Photoluminescence spectroscopy is a contactless, nondestructive method of probing the electronic structure of materials. Light is directed, on to a sample, where it is absorbed and imparts excess energy into the material in a process called photo excitation. One way this excess energy can be dissipated by the sample is through the emission of light, or luminescence. In the case of photo-excitation, this luminescence is called photoluminescence. Photo excitation causes electrons within a material to move into permissible excited states. When these electrons return to their equilibrium states, the excess energy is released, this causes the emission of light. The energy of the emitted light relates to the differences in energy levels between the two electron states involved in the transition between the excited state and the equilibrium state. Photoluminescence spectroscopy provides a good method for the study of luminescent properties of materials.

In the present study, Raman and PL spectra were collected in the backscattering geometry with the excitation of 532 nm laser line. The Raman scattering and PL emissions were dispersed through 2400 gr/mm and 1800 gr/mm grating, respectively, and detected using the CCD detector.

Morphology of grown structures is studied using the field emission scanning electron microscopy (FESEM). Fig. 2 shows typical FESEM micrographs corresponding to different areas of the sample. The FESEM microanalyses revealed the fact that layered structures were grown all over the sample (Fig. 3a-c). In addition, it was also observed that nanowalls were grown in certain areas (Fig. 3d). However, layers with dispersive thickness were observed. 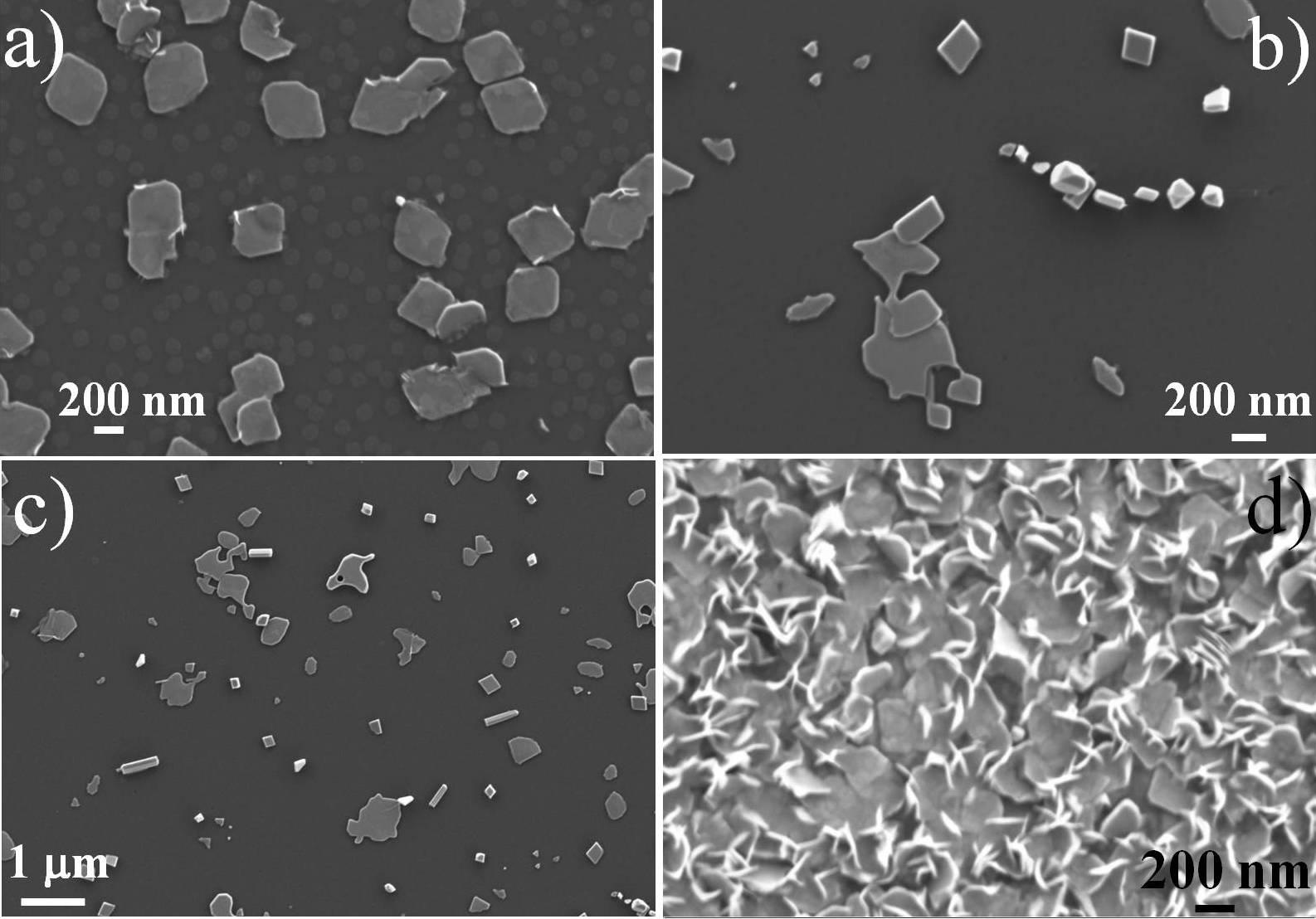 FESEM micrographs representing the different area of the sample

Vibrational properties of the grown sample were studied using the Raman spectroscopy. Raman spectra collected at different areas of the sample is shown in Fig. 3. Two prominent peaks are observed around the frequencies of 382 and 408 cm-1 which are assigned to E12g and A1g phonon modes of MoS2, respectively.8 As mentioned earlier, the frequency difference between these modes are dependent on the number of layers in the system. 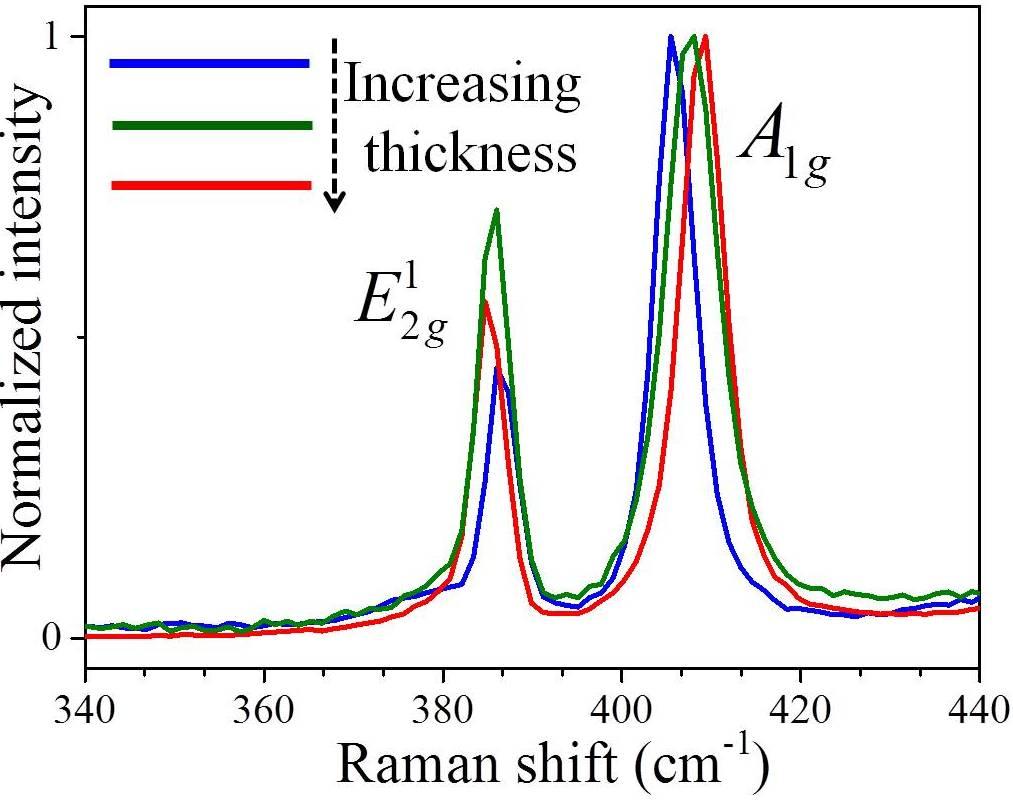 In the Raman spectra, the frequency differences between these modes are ≥ 21 cm-1. Consequently, it confirms that grown MoS2 layers are either bilayer or multilayers.8 It is also observed that as the thickness of the layer increases E12g phonon mode red-shifted while A1g blue-shifted. Similar kind of observation is reported in the literature.8 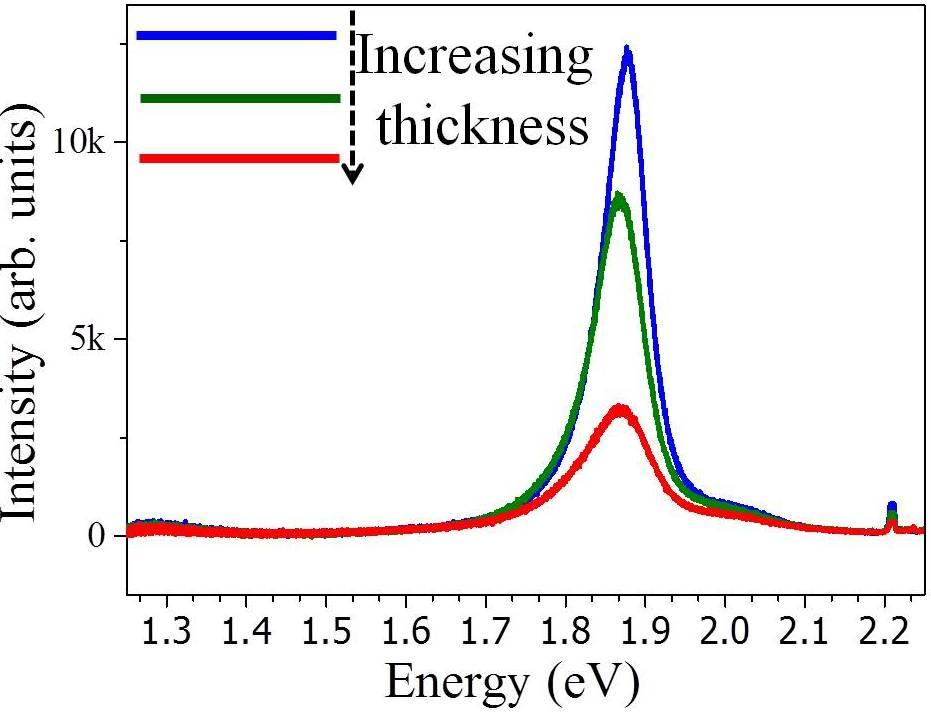 Fig. 4 shows the typical PL spectra of MoS2 layers with varying thickness. The strong PL emission is observed in the energy range of 1.8-2.0 eV. Moreover, we failed to found any emission around indirect band gap energy, ~ 1.2 eV. Thus, the strong PL emission in the given energy range further confirms grown MoS2 is a few layered structures. As mentioned earlier, luminescence yield is dependent on the thickness of the layered structure or number of layers in the system. Figure 4 clearly illustrates that the luminescence yield is decreased as the thickness of the layer increased.

Bi- and few layered MoS2 is successfully grown using the atmospheric pressure chemical vapor deposition technique. MoS2 layers with varying thickness and MoS2 nanowalls are observed in FESEM analysis. Raman spectroscopy analysis confirmed the MoS2 phase of the grown sample. In addition, frequency difference of A1g and E12g phonon modes revealed the layered structures correspond to the bi- and few layers of MoS2. Strong PL emission is observed in the energy range of 1.8-2.0 eV and luminescence yield observed to decrease with increasing thickness.

I would like to thank the Indian Academy of Science for organizing this wonderful Summer Research Fellowship Program 2019 and giving me the opportunity to work under Prof. Dr. Sandip Kumar Dhara, for whom I cannot find words to express sincere gratitude and thanks. Despite being busy, he always managed time for me and I could learn a lot during my stay here.

He has given me such an amazing learning experience under the caring guidance of Dr. Kishore Kumar Madupu. He was continuously helping me to learn something new, gain as much as knowledge as I can in an enjoyable, yet deep way. His valuable research time was given to me for my improvement and thanking him here is too less in front of his guidance. In this occasion, I like to acknowledge other lab members of SND, especially Choudhary Abinash Bhuiyan, JRF, for their help in growing the MoS2 samples using the CVD system.

We were provided with a wonderful platform for writing well-designed reports, which look professional. So, I would like to thank the Authorcafe team for their support and they were readily available to solve any technical difficulties. I am highly grateful to Dr. Neetha job, Professor at CIPET for recommending me to apply for this fellowship. I am also thankful to Dr. Dhanya, Suraj Varma, and Jayavani, Assistant Professors (Dept. of Polymer Science), who had continuously supported me to carry out this project. I have gained a lot of knowledge and experience from this summer project which will be highly useful for my future studies.