Bacteria are well equipped to sense the changing external environment and regulate the different physiological processes accordingly. One of the reasons why Mycobacteria is such a successful human pathogen is due to its ability to adapt into host environment using different secondary messengers like c-di-GMP, c-di-AMP, (p)ppGpp, etc. Though the role of c-di-AMP has been studied in some other Gram positive pathogens like Bacillus subtilis and Staphylococcus aureus, not much is known about its physiological relevance in case of mycobacteria. Broadly, in this project we aim to do structural and functional characterization of c-di-AMP using Mycobacterium smegmatis as a model organism. We have cloned the genes for DisA Synthetase and MSPDE hydrolase, the two enzymes responsible for biosynthesis and hydrolysis of c-di-AMP to maintain cellular homeostasis and verified the constructs by DNA sequencing. These constructs will be further used for protein purification and biophysical characterization of the corresponding enzymes.

Cyclic di-adenosine monophosphate (c-di-AMP) acts as a second messenger molecule which plays significant role in signaling pathways under some stress conditions that involves in change of pH, temperature etc. [1]. It transmits the ever changing external signals to effector molecules by binding with receptor proteins [2]. c-di-AMP was first identified in Thermotoga maritima where it was found to be involved in DNA repair mechanism [3]. After that, different studies have shown that c-di-AMP molecule is responsible for maintaining different phenotypes in different bacteria which includes maintaining the DNA integrity and regulating sporulation in Bacillus subtilis [4], maintenance of potassium ion channel homeostasis in Streptococcus pneumoniae [5], regulation of biofilm formation in Streptococcus mutans [6], regulation of cell wall synthesis and cell size in Staphylococcus aureus [7], also predicted to regulate potassium import through binding of KtrC in Mycoplasma pneumonia [8] and regulation cell wall homeostasis in Listeria monocytogens [9]. It is also seen that c-di-AMP elevates the levels of interferon β which is secreted by Listeria monocytogens infected cells [10] indicating that c-di-AMP plays important role too inducing the immune response in the host.

Mycobacterium tuberculosis (M.tb) is the causative agent of tuberculosis (TB) and considered to be one of the dangerous infectious agents in terms of mortality. According to World Health Organization (WHO) report, 10.4 million people fell sick with TB in 2016 with approximately 10% cases resulted death [11]. Due to global rise of antibiotic resistance, the situation has become even worse. Deaths reported due to MDR-TB and XDR-TB is the highest in India among all countries. M. tb directly targets host macrophages and lives in dormant state there resulting prolonged infection [12]. There have been several studies indicating role of c-di-GMP and (p)ppGpp, the other two well-studied nucleotide second messenger, for survival of the bacteria in intracellular stress conditions [13]. But the physiological implication of the structurally related nucleotide messenger c-di-AMP in M. tb is still not well understood. c-di-AMP is synthesized by diadenylcyclase (DAC) or DisA enzyme through a condensation reaction by taking 2 ATP or 2 ADP molecules. To maintain the homeostasis c-di-AMP level, another enzyme phosphodiesterase (PDE) degrades it into pApA and further to AMP. Phosphodiesterase enzyme in Mycobacterium smegmatis (M.sm) is known as MsPDE (MSMEG_2630) which contains a DHH-DHHA1 domain and shows a 200-fold higher hydrolytic efficiency (kcat/Km) to c-di-AMP than to c-di-GMP [12]. It is also found that deficiency of MsPDE significantly enhance intracellular C12-C20 fatty acid accumulation whereas deficiency of DAC enzyme in many bacteria results in cell death [12]. 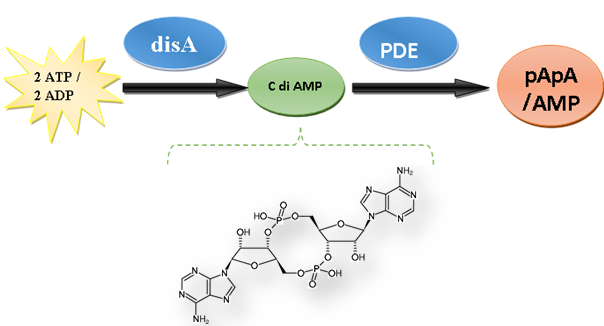 Synthesis and degradation of c-di-AMP

Scope of the Study

There has been no particular study which describes the biological role of the newly discovered second messenger c-di-Amp in M.tb. In this particular project we aim to do protein purification and biochemical characterization of DisA (Sythetase) and MsPDE (hydrolase) enzymes which are responsible for cellular homeostasis of c-di-AMP in M.semgmatis which is considered to be an excellent model organism for tuberculosis research.

During my short tenure, I focused on construction of expression vector constructs for disA and mspde gene by restriction digestion based cloning method and confirmation of the same by DNA sequencing.

Nanodrop spectrophotometer was used for determining the concentration of genomic DNA and milliQ water used as blank.

Identification of the Sequence of Gene of Interest

Sequence of disA and pde gene were identified from Mycobrowser website. The gene accession number MSMEG_6080 and MSMEG_2630 were obtained from the whole genome of wild type M. smegmatis MC2 155 chromosome in FASTA format.

Ploymerase chain recation (PCR) is used to amplify a gene sequence using a genomic DNA which has the sequence of interest. DNA polymerase helps in synthesizing new strands of DNA using dNTPs and two sets of primers. Mg2+ required by the polymerase enzyme is supplemented by Phusion buffer.

PCR was done for 35 cycles.

Restriction digested vector samples were run on 1% agarose gel and visualized under UV transilluminator for bands and cut the desired band with sterile blade and collected in an eppendorf tube.

1. The cut gel part is weighed and 3 times of QG buffer added into it and put it at 50 deg C for 10 minutes until the gel is completely dissolved.

2. After that 1 Volume of isopropanol was added and mixed.

3. The solution was transferred to Qiagen column tubes and centrifuged at 13000 rpm for 1 minute.

4. After discarding the flow through 750ul of wash buffer PE was added into the column and centrifuged at 13000 rpm for 1 minute. The column was centrifuged for additional 1 minute

5. Column was placed into a sterile ependorf tube and 30 ul of elusion buffer was added at the center of the column and left it to stand for 1 minute and finally, the centrifugation was done at 13000 rpm for 1 minute.

The mixtures is incubated at 37°C & inactivation was done by keeping in 65°C for 20 minutes.

Vector to insert ratio of 1:3 was used (volume calculated according to concentration) for cohesive end ligation.

Competent cells are those which can incorporate plasmid and foreign DNA upon transformation.

Now the individual ligation mix are added into 50ul of competent cells of DH5α and transformation is performed by heat shock method.

Concentration of isolated genomic DNA from M.smegmatis MC2 155 strain by nanodrop was 920ng/ul. It was also analyzed by running in 1% agarose gel. Forward and reverse primers were designed for pde, disA. Tm value of these two primers are 72ºC. 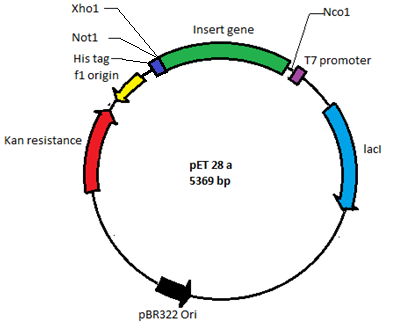 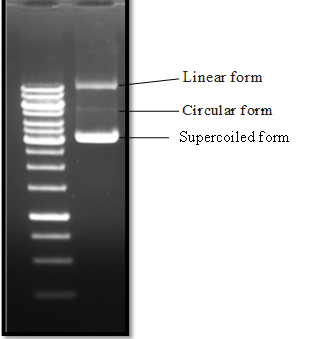 After the restriction digestion, plasmid samples were loaded with 6x loading dye in 1% agarose gel. 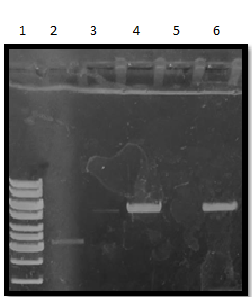 To detect the exact annealing temperature for disA and pde gene primers, gradient PCR was done. After that we scaled up that product by running at the best specific temperature. For disA PCR was run on 68ºC and for mspde 2 step PCR was done at 72ºC. PCR amplified disA and pde gene were run on a 1% agarose gel to analyze the bands. Band came around 1 kb position because size of disA is 1119bp and mspde is of 1023bp. 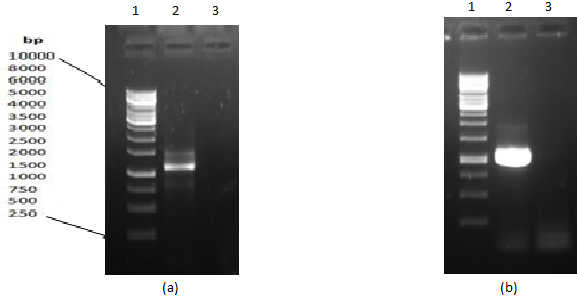 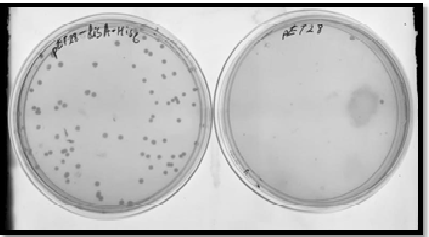 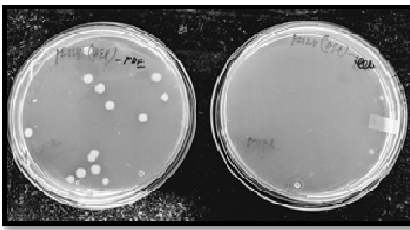 Screening of colonies by colony PCR

PCR mastermix is prepared by taking forward and reverse primer annealing at vector sequence upstream and downstream of cloning sites respectively. After colony PCR screening of positive clones were found for both. 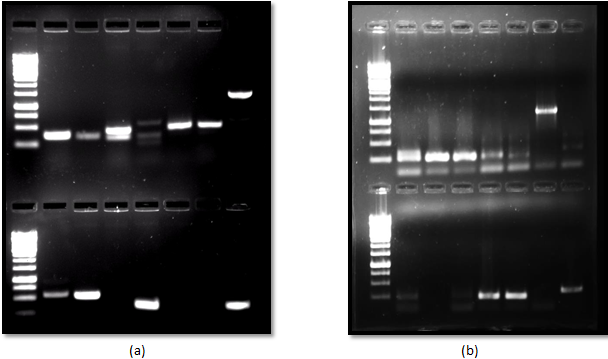 Colony PCR result of (a) pET28a-disA and (b) pET28a-pde transformants. The higher band in both the gels indicating the positive clone. 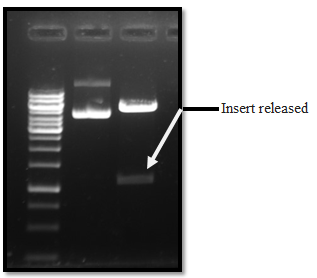 The clones were preserved at −80°C and extracted plasmids were send for sequencing. After analysing we found sequences of the clones clean, without any mutation and C-terminal his-tag was also in-frame with both disA and mspde genes. 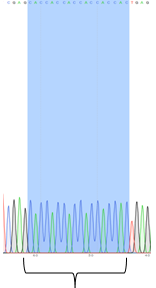 In this short project, I learnt how to make vector constructs by restriction digestion based cloning technique. The two genes in the final construct I fused (in-frame) with 6X-His Tag (C-terminal) which will be further used for protein purification and characterization studies.

I would like to express my sincere gratitude to Prof. Dipankar Chatterji, Molecular Biophysics Unit, Indian Institute of Science (IISc) for allowing me to work in his lab and for providing me an excellent platform for development. I thank him for his valuable guidance and giving me an opportunity to involve with a great research project.

I also wants to thank IASc-INSA-NASI for giving me this kind opportunity to selecting me in this summer research fellowship programme.

I am extremely grateful to my mentor Dr. Anirban Ghosh for taking me in his project and always being supportive and thanks for pointing out my mistakes. He has always shown great patience during this project work. I am thankful for that.

I am also thankful to all my seniors in the lab Avisek Mahapa, Anushya Petchiappan, Unnati Patel, Sudhanshu Gautam, Sujay Naik, Pranami Goswami, Anil Kumar, Shah Nisha and Sunita Prakash for their valuable suggestions and help during the whole span of my work. They were very friendly and I am thankful for all the lab treat, food and the wonderful moments I had with them. It has been my privilege to work with these extremely talented peoples.

I would also like to thank my fellow trainees Siddhartha Chakraborty and Srishti Mittal for being helpful and supportive throughout my project. I also thank my friends and roommates of jallahali guest house who gave me wonderful company during this time in Bangalore.