One of the manufacturing approaches where the metallic parts are pressed with higher level of pressure is hot forging. In order to enhance the flow of metal, the lubricant is provided to the heated dies. The better understanding on heat transfer and film formation will ensure precise control of lubricant spray, which in turn, helps in lessening the level of energy utilization in hot forging. It is essential to investigate the interaction between droplets of liquid based lubricant and surface of die. The concept of drop impingement has projected various explorations by the scientific community over a lot of decades in search of meticulous consideration of interactions related to heat transfer, mass and momentum. The survey related to the solid objects (high temperature) interacting with evaporative liquid droplets has clearly pointed out the scope for theoretical analysis. The research related to droplet evaporation near Leidenfrost point seems to have good scope in many technical applications. Based on the work carried out in the field of evaporation droplet as reported in literature, the scope for theoretical analysis on various types of droplet impact experiments is identified. The theoretical analysis will help us to investigate the process of evaporation on the liquid drop impacting on heated surface at the Leidenfrost point. The experimental and calculated results can be compared for drawing the relationship between evaporation lifetime, diameter & height of droplet, and thickness of vapor film. Also, the maximum value of contact radius can be determined using theoretical analysis. The research articles related to modeling of evaporative liquid droplet impacted on the surface of die, heated to the temperature beyond Leidenfrost point have been studied and the appropriate derivations were practiced. It was useful to theoretically understand the relationship between evaporation lifetime of droplet and surface temperature using experimental & calculated results.

The high strength parts are effectively produced through the process of forging which is one of the manufacturing processes where the metal is said to experience huge pressure. The process of hot forging is usually carried out by preheating the metallic work-piece to an appropriate temperature higher than the recrystallization point. In hot forging, the environment in which the work has been carried out can be enhanced by incorporating the concept of lubrication as a significant factor. The billet is said to get forged only after the lubricant being provided to the die. This is mainly for substantial reduction of friction and wears thereby assisting the release of the finished component at the time of forging. Although, there are many types of lubricants suitable for the work, the largely preferred lubricant is graphite [1]. The usual method of spraying it to dies is carried out through nozzles in the form of droplets. The mode in which it is applied plays a vital role as it tends to influence the lubricant wetting on the die. This leads to understanding of the thermal effects on heated walls of the forged die. The better understanding on heat transfer and film formation will ensure precise control of lubricant spray, which in turn, helps in lessening the level of energy utilization in the hot forging process. This is achieved through enrichment of lubricant wetting with the die with substantial decrease in the billet pre-heat temperature.

M. S. Lin Yang [1] has carried out physio-thermodynamic investigation of lubricant application to hot die surfaces in his Ph.D. dissertation in the year 2005. His research included several novel theoretical approaches to deal with the concept of drop impingement. The research work carried out by Heng Xie et. al. [2] focused more on developing a model for droplet evaporation near Leidenfrost point. The parameters considered in their work were wettability, initial droplet diameter, initial Weber number and solid surface superheat. They were able to develop a connection for determining evaporation lifetime using the theoretical analysis and experimental results. Gangtao Liang et al. [4] reviewed the research related to the drop impact on heated walls. His research was focused on the drop impact in terms of the mechanisms related to heat transfer. The results focused on the impact process and its inconsistencies. Nagai and Nishio [5] carried out a typical research experiment of acetone droplet impact and analyzed the experimental results with the calculated details. L.H. Wachters et. al. [6] conducted a research on the heat transfer from a hot wall to impinging water drops in the spheroidal state. The theoretical analysis was carried out using the expression suggested by S. Inada et. al. [7] for the film boiling heat transfer of saturated drops impinging on a heated surface.

The notion of drop impingement is said to exhibit abundant engineering benefits. The importance of this fact has spurred various investigations by researchers in search of meticulous consideration of interactions related to heat transfer, mass and momentum. The survey on solid objects (high temperature) interacting with evaporative liquid droplets has clearly pointed out the scope for theoretical analysis thereby analyzing the effect of significant factors along with their influences, and developing appropriate correlation based on the experimental and theoretical models. The research related to droplet evaporation near Leidenfrost point seems to have good scope in many technical applications, such as, process of rewetting in the case of fuel rod in nuclear reactor, heat treating of metallic alloys at the time of spray cooling, and impingement of oil droplets on turbine engines. Whenever a liquid drop tends to impact against a hot solid surface, it tends to remain on its own surface or rebound based on the situation. It tends to boil rapidly and vanishes after a short period of time. But, if the temperature of hot surface is found to be high enough, the drop tends to avoid the contact with the surface.

Impact scenario of liquid droplet onto a solid surface

When the liquid drop hits or strikes the solid surface (preferably hot) at the Leidenfrost point, it tends to spread on that surface. Once it has reached the maximum diameter, it tends to produce a vapor film below the drop which is stretched [9]. The stretched drop tends to rise and float on the vapor film. This makes the drop to get transformed into a spherical one through the process of recoiling or rebounding. 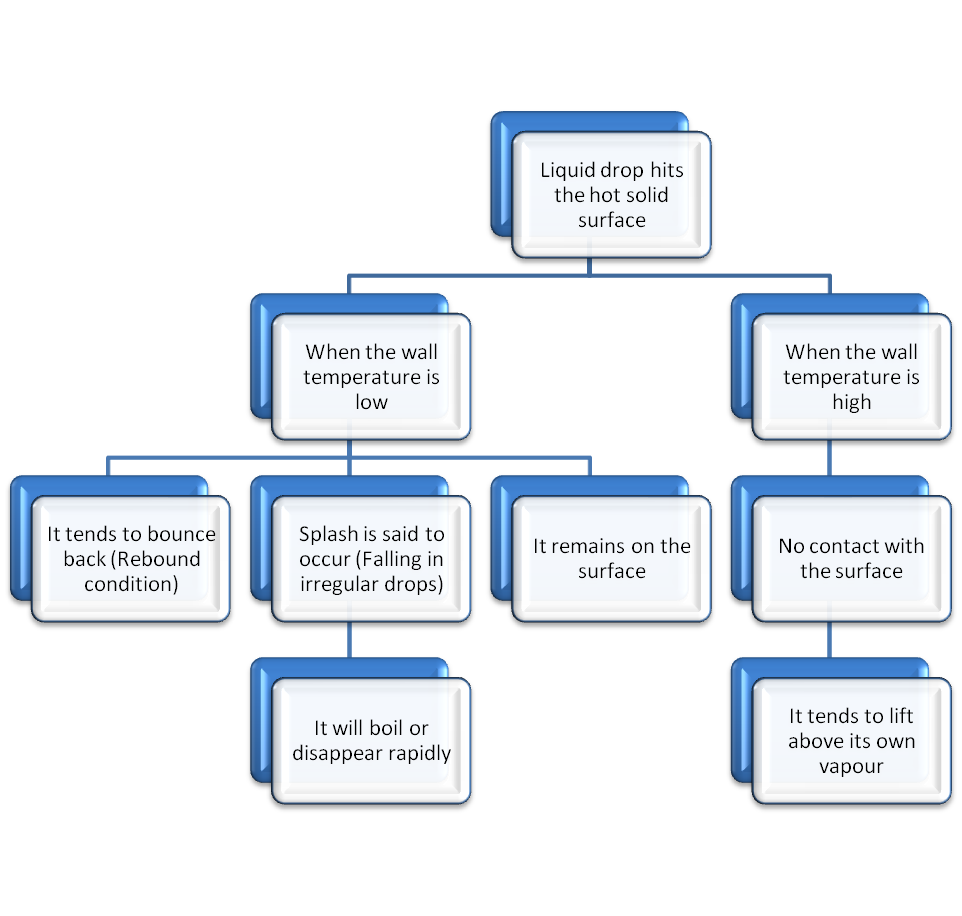 The concept of liquid droplet evaporation deals with the formation of vapor film which tends to play a crucial role in the process. Initially, the liquid drop hits the hot solid surface and it tends to spread on the solid surface. It has the potential to stretch itself to the maximum reachable diameter [10]. The vapor film is said to form below the stretched drop which helps in lifting the stretched drop during the process of evaporation. It is said to change its shape gradually into a spherical one. Finally, the liquid droplet is said to disappear at the end of evaporation process. 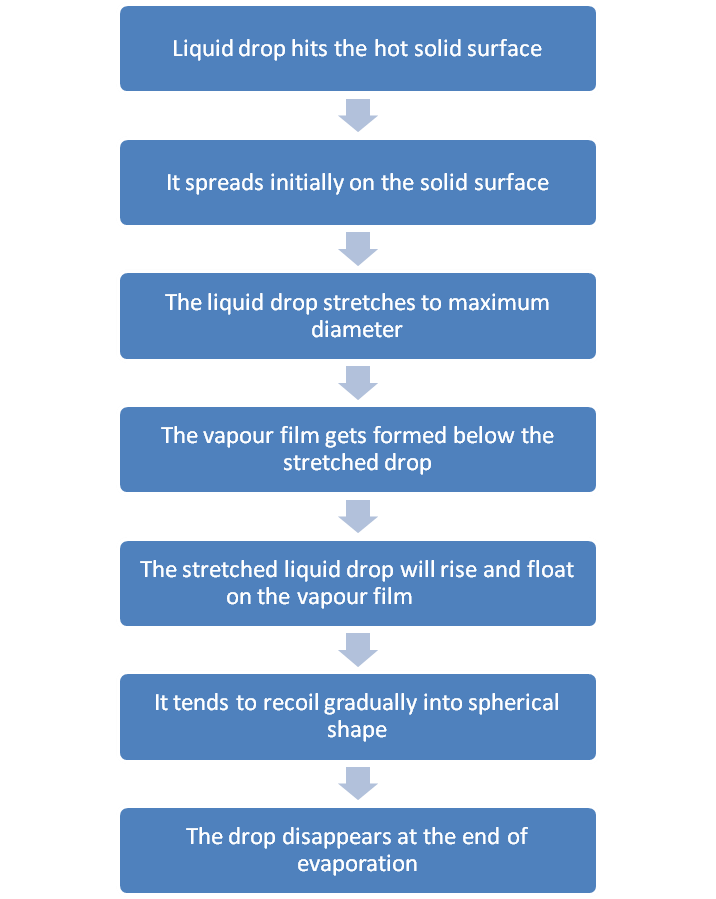 The concept of Leidenfrost effect deals with the temperature of wall at which the droplet’s whole evaporation time on the heated surface is found to be highest. It is found to be an approach, in which an insulating layer gets formed in order to check the rapid boiling of liquid. The liquid has to be available near the surface which is considerably hotter than the boiling point of liquid. 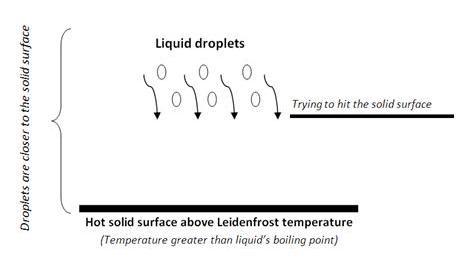 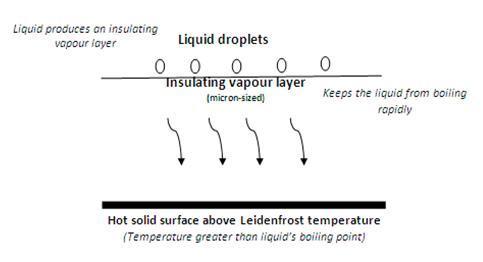 The mass change of the droplet has been defined similar to that of the heat transfer model suggested by Biance et al. [11] which involves thermal conductivity ‘k’, temperature gradient ‘ΔT/e’, ΔT= Surface (plate) temperature – Saturated (boiling) temperature, surface area ‘πλ2’, mass flow rate ‘dtdm​’, and latent heat of evaporation ‘L’. The heat or mass brought to liquid per unit time is defined asQ∝ekΔTπλ2​.The height of droplet is expressed as h = [m/ρ1πλ2]. Heng Xie et. al. [2] developed a dimensionless parameter (T n) by incorporating the influence of the parameters relating to curvature of drop. The curvature of drop is mainly related to the change of thickness of droplet, diameter of droplet, and thickness of vapor film.

The relationship is expressed in terms of the dimensionless parameter as given in Equation No. 03.

The equations derived by Heng Xie et. al. [2] was studied and the mathematical relations were understood.

Substituting the values of h and e in Eqn. No. 03, we get

From the earlier equation, it was clear that

The results determined by Heng Xie et. al. [2] was studied and a clear understanding has been obtained after solving them on our own. Further, it was evident that the analysis carried out by them paves way for research in the theoretical analysis of liquid droplet [8].

The following points have been concluded from the exploratory investigation carried out by us on the concept of drop impingement.

The evaluation of significant factors and their influences can be investigated by clearly pointing out the relationship between evaporation lifetime, diameter & height of droplet, and thickness of vapor film.