A linear Paul trap is being assembled for applications in quantum computing. It will be used for trapping a string of Ca+ ions. The required RF field is applied to 4 electrodes. Each one is segmented into 3 electrically isolated parts, giving a total of 12 electrodes. It is a 3D geometry and placed in a UHV chamber for long time. The pressure is maintained using an ion pump. The entire chamber including ion pump has to be baked out (to get rid of moisture) to a pressure around 10-8 torr with turbomolecular pump. The trapped Ca+ ions are going to be laser cooled using an allowed transition at 397nm.

The basic idea of the ion trap is to confine charged particles. It is easier to trap ions compared to neutral atoms because their charged nature means that they interact strongly with external fields. It is applied to ultra high precision spectroscopy, quantum information processing, development of frequency standards. The internal electronic state and motion of trapped ion can be modified using lasers. One important application of trapped ions is in quantum computing. Quantum computers works with quantum bits (qubits) which are analogous to classical bits. Qubits are a coherent superposition of two basic states 0 and 1. And it was an innovative idea to use linear Paul trap for quantum computing. The electronic levels of the trapped ion can be used for qubits. Here calcium ions are taken as the carrier of qubits because the lifetime of metastable states of calcium ions allows a reasonable number of coherent operations to be performed in comparison with other similar elements. Before performing quantum computing experiments with calcium ions it is necessary to measure the lifetime of metastable states. For that the ions are generated, trapped and then laser cooled.

An ion trap is used to confine charged particles in free space using electric or magnetic fields. Earnshaw’s theorem states that one cannot construct a stable ion trap using electrostatic field alone. The two common types of ion traps are (i) Penning Trap (ii) Paul Trap. The Penning trap was first built by Hans Dehmelt and is named after Frans Penning. It uses a combination of quadrupole electric field and axial magnetic field to trap ions in all three dimensions. The Paul trap is designed by Wolfgang Paul and used to confine charged particles using an oscillating radio frequency field in combination with a static electric field to produce quadrupole potential. The potential energy must be minimum for
the confinement of charged particles in all 3D. The quadrupole field is given by

where A,B,C are some constants depending on the applied potential , d is a normalizing factor which depends on trap geometry and Ø0 can be time-dependent function.

To satisfy Laplace's equations we must have

In the case of rotational symmetry around z axis, the coefficients becomes A = B = 1 and C = -2, giving the equation as​

A linear Paul trap consists of 4 parallel electrodes which are segmented into three isolated parts. The quadrupole geometry creates a hyperbolic potential with saddle points that trap ions. The applied voltage U0+ V0 cosωt of amplitudes U0 and V0 for DC and AC voltages respectively, generates a quadrupole potential near the axis having the form,

where is d0 the distance from centre of trap to the electrode surface. Ions in the quadrupole experiences a restoring force which drives them back towards the centre. 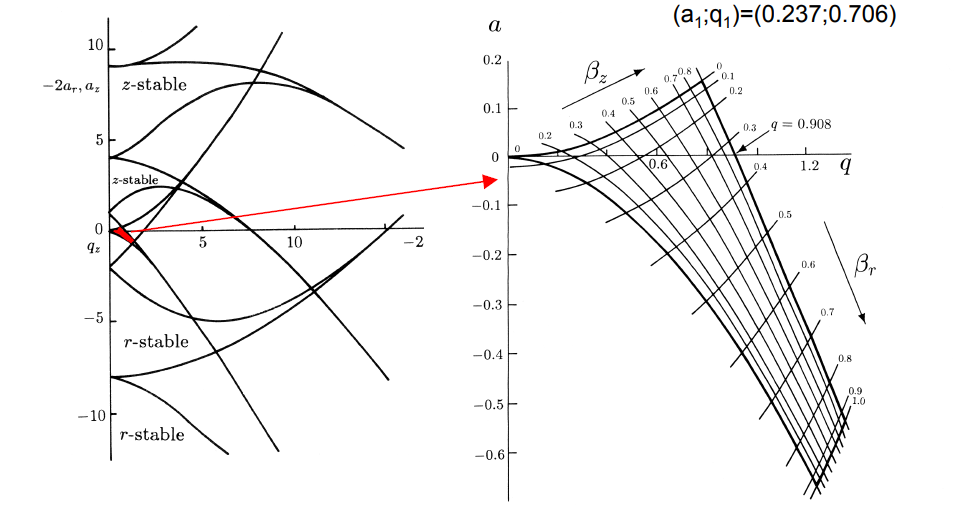 The equation of motion takes the form of Mathieu equation,

The trapping of ions can be found out in terms of the stability regions in a and q space. By superimposing the stability diagram in all three directions we obtain the region of stable trapping parameters a and q.

Laser cooling of single atomic particles has been proposed by Hansch and Schawlow, Wineland and Dehmelt in 1975. Laser cooling on Ba+ ions and Mg+ ions was first observed by Neuhauser et al. and Wineland et al. in 1978. Laser cooling of trapped ions can be treated in two different limits.

If trap frequency ν is less than Γ the line width of optical transition used for laser cooling,then the final temperature is limited to T = hΓ/2kB, where kB is the Boltzmann constant. The limit on the temperature in this regime is called the Doppler cooling limit and the regime is known as weak binding regime.

If trap frequency ν is greater than Γ (the strong binding regime), the trapped particle develops well-resolved absorption sidebands at the trap frequency and can be optically pumped to the lowest vibrational state by exciting selectively the lower sideband (sideband cooling). In this case the trapping potential has to be treated quantum mechanically. In general, a harmonic oscillator potential is assumed. The particle’s temperature can be very low and is given by the probability of being in the lowest state of the quantum mechanical oscillator. Sideband cooling is possible only if the particle is confined to a region in space which is too smaller than the wavelength of the laser light used for cooling.This regime is known as Lamb-Dicke regime. The trapped ions would have very high kinetic energies.The cooling laser is slightly red detuned such that only the atoms moving towards the laser source with particular velocity can absorb photon and slows down to conserve momentum. When the atom absorb the photon, it excites to a higher quantum state and eventually re-emits the photon and moves opposite to that of the emitted photon. Successive absorptionand emission cycles will lead the sample to cool. Doppler cooling happens by driving S1/2 to P1/2 dipole transition at 397 nm and the emitted scattered photons are detected as Ca+ fluorescence. Most of the excited ions decay back to S1/2, while the remaining decay of the metastable state D3/2. A laser at 866 nm prevents the optical pumping into the D3/2 level. Side band cooling is performed on the dipole-forbidden S1/2 to D5/2 line at 729 nm, with a laser at 854 nm pumping out to D5/2 level to enhance the cycling rate. A Zeeman sublevel of S1/2 and one of D5/2 form the qubit on which coherent operations are driven by the 729 nm laser. The final state is detected by the 397 nm laser which excites resonance fluorescence when the ion is in S1/2, but does not couple to D5/2. 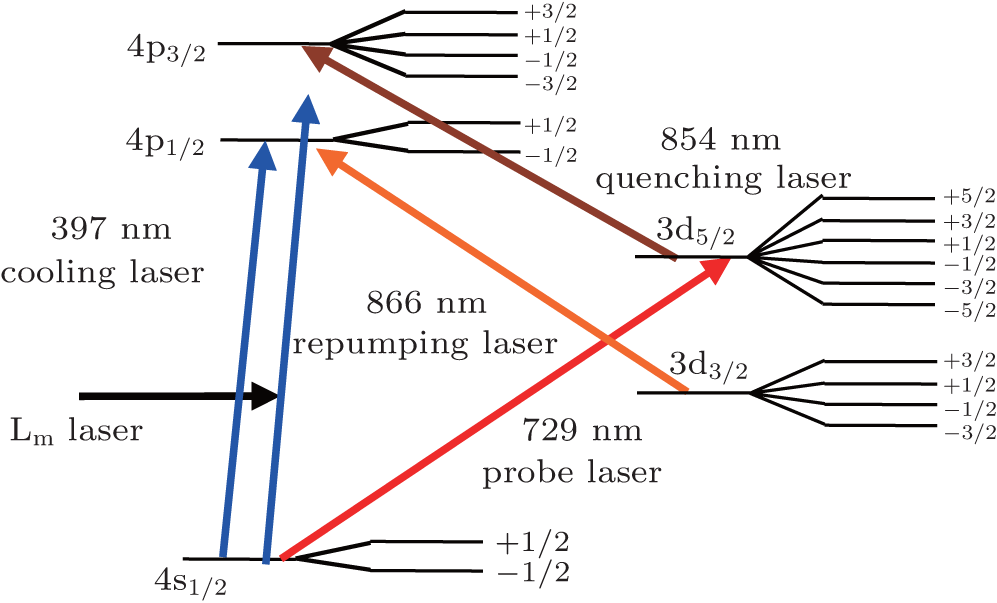 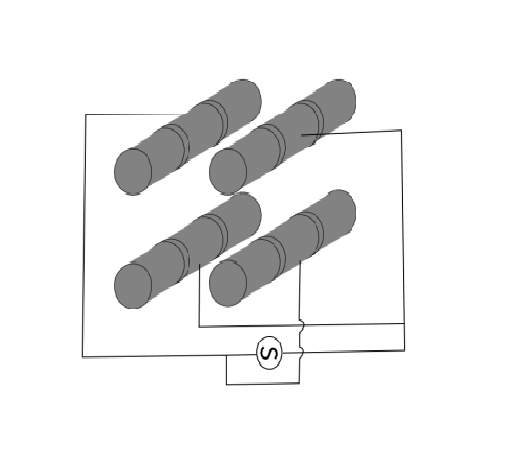 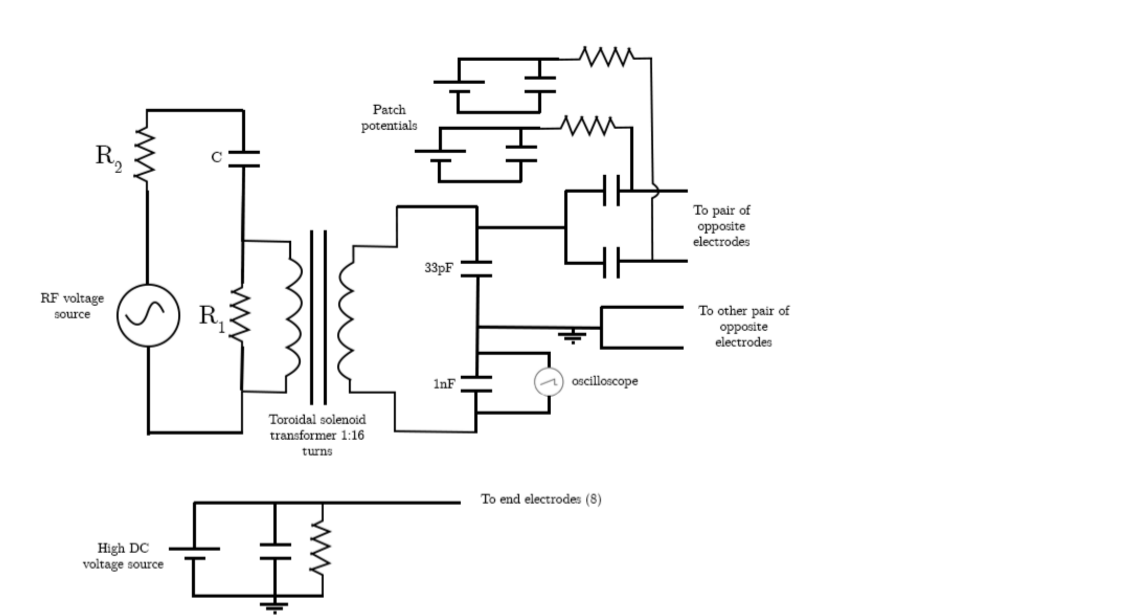 Electronic circuit for matching the impedance of the source to that of the electrodes.

The values of the variables R1, R2 and X is chosen so as to make the complex terms of the RHS to zero, real terms sum to 50 Ω and also maximize R1 and minimize R2 and X.

Now equating the real sides and imaginary sides, we get

The assembled trap was placed inside a ultra high vacuum chamber. The UHV consists of three stage pumps -rotary, turbo and ion pump. The three pumps are connected to the octagonal vacuum chamber as shown in the figure. Three of them are used one after the other. The rotary pump helps attain low pressures upto 10−5 torr. This is used since the equipment used to attain higher vacuum do not operate or operate inefficiently in the at low vacuums and require a good starting vacuum. The turbo molecular pump is used to attain higher vacuum of 10−8 to 10−10 torr. The ion pump attain the pressure upto 10-11 torr. First the rotary pump is turned on. Turbo pump rotates at a maximum speed of 61 krpm and need a certain level of vacuum for proper functioning, so it is switched on after one minute. 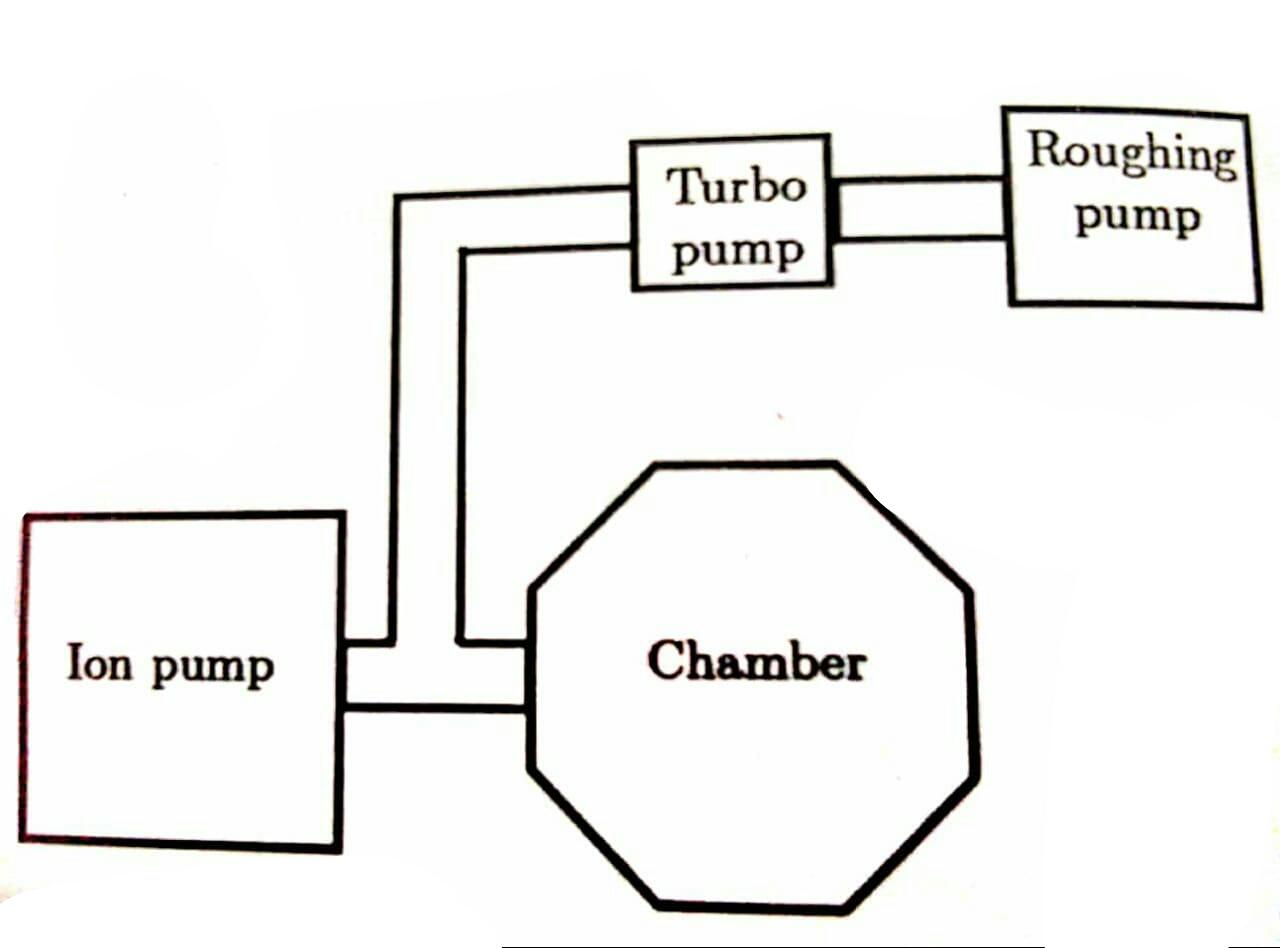 Schematic of the vacuum chamber.

We prepared two different sources.The first source consists of two thin cylindrical tubes. Among the two, one is filled with calcium granules. The two tubes are connected with each other with tantalum foil and these two foils are inserted into a feed through with outer end is connected to constant current source. When the current passes through the tube it gets heats up and the calcium get vaporised.

For second calcium source an ampule of length 32 mm and of diameter 5.1 mm, have an orifice at one end is taken and is filled with calcium granules. Tungsten wire is wraped in shape of a solenoid around the ampule.

The tungsten wire will heat the calcium granules when current pass through it. The wire wounded ampule is placed inside a cylindrical shaped hollow alumina rod of length 44.7 mm and of inner diameter 9.8 mm and outer diameter 14.92 mm. The alumina will act as a radiation shield. One end of the wire which comes from inside of the rod and the other end of wire is allowed to pass through the slit made on the rod. Then the two ends of the wire is connected to the feed through. The other end of feed through is connected with constant current source of compliance voltage (6 v).

The source is placed in another vacuum assembly for observing the ﬂuorescence. When the current is passed through the tungsten wire, it will heat the calcium granules. When laser beam of wavelength 422 nm is allowed to fall on the vapour cell. And the ﬂuorescence is monitored.

We have designed a linear Paul trap to trap Ca+ ions and also designed an impedance matching circuit for RF source. The source and vacuum preparation were also done. With much eﬀort we prepared the two sources and we checked for the emission of calcium atomic beam of 422 nm ﬂuorescence.By operating at 4 A we spiked to 6 A expecting that the oxidised covering will be removed. But the ﬂuorescence was not observed in both of the source. The most probable reason for this would be that the source was completely oxidized and thus the calcium source failed in producing the atomic beam.

The importance of quantum computing lies in the fact that it solves certain complex problems exponentially faster than the classical computational techniques. In this project, the main objective was to conﬁne calcium ions in a linear Paul trap so as to contribute in setting up a quantum computer. The reason why we trap the ions is because the internal state of each of these ions represent the smallest unit of quantum information known as qubit. The observance of ﬂuorescence in the experimental source (as we performed in the experiment) is one of the important factors in determining whether the atomic beam of source would be able to move on the trap region. Then the ions can be conﬁned in a linear Paul trap and can be implemented in the quantum computer. But we are not able to observe the ﬂuorescence possibly because of the oxidized calcium source.

I express my profound gratitude and sincere thanks to Prof. Vasant Natarajan, Department of Physics, IISc Benguluru, under whose guidance, this work was carried out. I am indebted to him for his valuable suggestions and encouragement for the completion of this work. I am thankful to Mr. Mangesh Bhattarai for helping, guiding, clarifying my doubts and monitoring the progress of this project continously. I would also like to thank Mr.Raghuveer for always being ready to help. I am grateful to my lab partners Yashaswani and Samarth. I also express my respectful gratitude to my parents, teachers and friends for their support and valuable advice. Above all I am indebted to God almighty, without His grace I could never complete this work.