Division of Agronomy, Sher-e- Kashmir University of Agricultural Sciences and Technology of Kashmir 190025

Climate variability has been, and continues to be, the principal source of fluctuations in global food production in countries of the developing world and is of serious concern. Process-based models use simplified functions to express the interactions between crop growth and the major environmental factors that affect crops (i.e., climate, soils, and management), and many have been used in climate impact assessments. The average for 10 years of weather data from 1985 to 2010, the maximum temperature shows an increasing trend ranging from 18.5 oC to 20.5oC . This means there is an increase of 2oC within a span of 25 years. Decreasing trend with respect to precipitation was observed with the same data. The magnitude of decrease was from 925 mm to 650 mm of rainfall which is almost a decrease of 275 mm of rainfall in 25 years. Future climate for 2011-2090 from A1B scenario extracted from PRECIS run shows that overall maximum and minimum temperature increase by 5.39 oC (±1.76) and 5.08 oC(±1.37) also precipitation will decrease by 3094.72 mm to 2578.53 (±422.12). The objective of this study was to investigate the effects of climate variability and change on maize growth and yield of Srinagar, Kashmir. Two enhanced levels of temperature (maximum and minimum by 2 and 4 0C) and CO2 enhanced by 100 ppm & 200 ppm were used in this study with total combinations of 9 with one normal condition. Elevation of maximum and minimum temperature by 4oC during anthesis and maturity of maize was earlier 14 days with a deviation of 18%, and 26 days with a deviation of 20%, respectively. With an increase in temperature by 20C to 4 0C, alone or in combination with enhanced levels of CO2 by 100 and 200 ppm, the growth and yield of maize drastically declined with a reduction of about 40% in grain yield. Enhancement of CO2 alone at both the levels fails to show any significant impact on maize yield.

The effect of climate change on crop productivity is usually investigated by experimental methods using a growth chamber or by numerical methods using a crop simulation model. According to the IPCC Third Assessment Report (IPCC 2007), climate change is already happening, and will continue to happen even if global greenhouse gas emissions are curtailed.

Many studies document the implications of climate change for agriculture and pose a reasonable concern that climate change is at threat to poverty and sustainable development, especially in developing countries. Future crop production will be adapted to climate change by implementing alternative management practices and developing new genotypes that are adapted to future climatic conditions. Long term weather data of Kashmir valley revealed (​​Fig 1​​) that there is increasing trend in temperature. Average maximum temperature has increased by 1oC during the last 30 years. Consequently average minimum temperature has increased by 0.5oC. Precipitation trend is decreasing and erratic. Crop simulation models can be used in decision making in advance along with GIS in future effectively, saving time.

Maize known as the “Queen of Cereals” is the third most important cereal crop in India after rice and wheat and is cultivated on 8.11 million (m) ha with production of 19.73 (mt) with productivity of 2.41 t ha-1 (​Agricultural Research Data Book 2011​). Among the major crops of Jammu and Kashmir in terms of acreage maize is grown in area of 0.32 mha with the production of 0.63 mt (D.E.S, 2010-11). The average yield of 2.0 tha-1 (D.E.S, 2010-11) of this crop has also nearly doubled since the last decade. This increase in yield has been mainly achieved by increase in the area under high yielding varieties. However, the genetic potential of the improved varieties is at least three times of the present average yield of the state. Being an important cereal, over 85% of its production in the country is consumed directly as food in various forms, the chapatis is the common ‘preparation, whereas, roasted ears, pop corns and porridge are other important forms in which maize is consumed. Besides, it is also used for animal feeding, particularly for poultry, and in the starch industry. Green maize plants furnish a very succulent fodder during spring and monsoon particularly in North India. Maize is grown under a wide range of climatic conditions, mostly in warmer parts of the temperate region and areas of humid sub-tropical climate. It is grown practically at all altitudes except where it is too cold or the growing season is too short. The crop requires considerable moisture and warmth from the time of planting to the termination of the flowering period.

Process-based models use simplified functions to express the interactions between crop growth and the major environmental factors that affect crops (i.e., climate, soils, and management), and many have been used in climate impact assessments. Most were developed as tools in agricultural management, particularly for providing information on the optimal amounts of input (such as fertilizers, pesticides, and irrigation) and their optimal timing. Dynamic crop models are now available for most of the major crops. In each case, the aim is to predict the response of a given crop to specific climate, soil, and management factors governing production. Crop models have been used extensively to represent stakeholder’s management options (Rosenzweig and Iglesias 1998).

Simulating the impact of climate change on growth and yield of maize using CERES-Maize model under temperate Kashmir.

To assess the impact of climate change on maize growth and yields under temperate kashmir.

DSSAT is a software package integrating the effects of soil, crop phenotype, weather and management options that allows users to ask "what if" type questions and simulate results by conducting, in minutes on a ktop computer, experiments which would consume a significant part of an agronomist's career. It has been in use for more than 15 years by researchers in over 100 countries. The DSSAT simulates growth, development and yield of a crop growing on a uniform area of land under prescribed or simulated management as well as the changes in soil, water, carbon, and nitrogen that take place under the cropping system over time. The ICASA/IBSNAT models have been used widely for evaluating climate impacts in agriculture at different levels ranging from individual sites to wide geographic areas (Rosenzweig et al., 1994; Rosenzweig and Iglesias 1998). This type of model structure is particularly useful in evaluating the adaptation of agricultural management to climate change. The DSSAT software includes all ICASA/IBSNAT models with an interface that allows output analysis. On the basis of the above observations, DSSAT 4.5 is selected to study environmental modifications on growth and yield of maize under temperate conditions of Kashmir.

Assuming that an appropriate model is selected and a reference crop production scenario exists, simulating the effects of climate change mainly involves running the model for the weather and CO2 scenarios of interest. For a single site or region, the scenarios may be specified as fixed (e.g. an increase in daily mean temperature of 2°C) or relative (20% decrease in daily precipitation). These adjustments may be held constant over the crop cycle or varied. The choice depends on the objectives and the source of the climate change scenario. Because a season might be unrepresentative of long-term trends, simulations are usually run for 20 or more years. The requisite weather data may come from historical records or from weather generator software that reproduces the statistical properties of historic conditions ( ​Jones and Thornton 2003​).

The Environmental modifications in the study are as given in ​Table 1​.

The location of the study is Shalimar Srinagar which is situated 16 km away from the city center that lies between 34.08 o N latitude and 74.830 E longitude at an altitude of 1587 meters above the mean sea level.

For simulation of CERES-maize model, minimum data sets (MDS) on crop management, macro and micro-environmental parameters associated with weather, soil and crop are required as input. The Input data files of CERES-maize model are as per IBSNAT standard input/output formats and file structure cribed in DSSAT v 3 (​Hoogenboom et al 1999​).

The soil file already developed at Shalimar for DSSAT was used for running model.

Genetic coefficients were calibrated and below mentioned values were used in the model.

Climate trends of the study area. 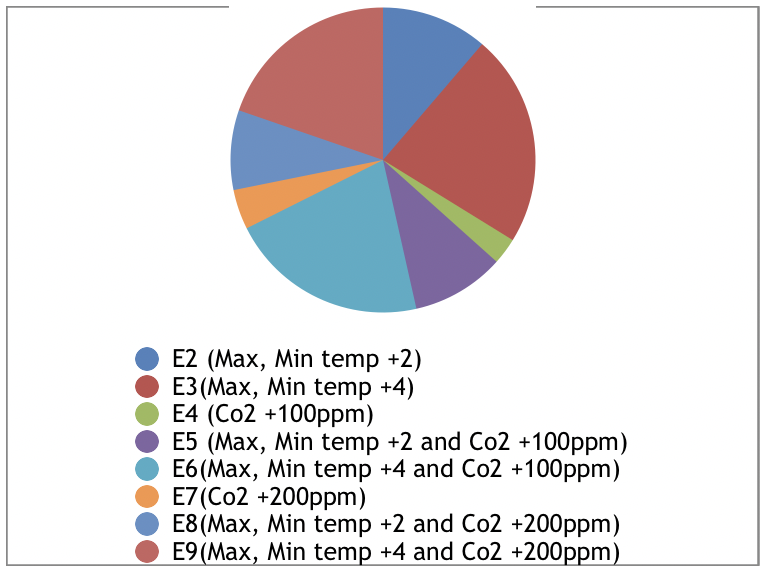 Deviation in tops weight % as function of change in temperature and CO2 levels. 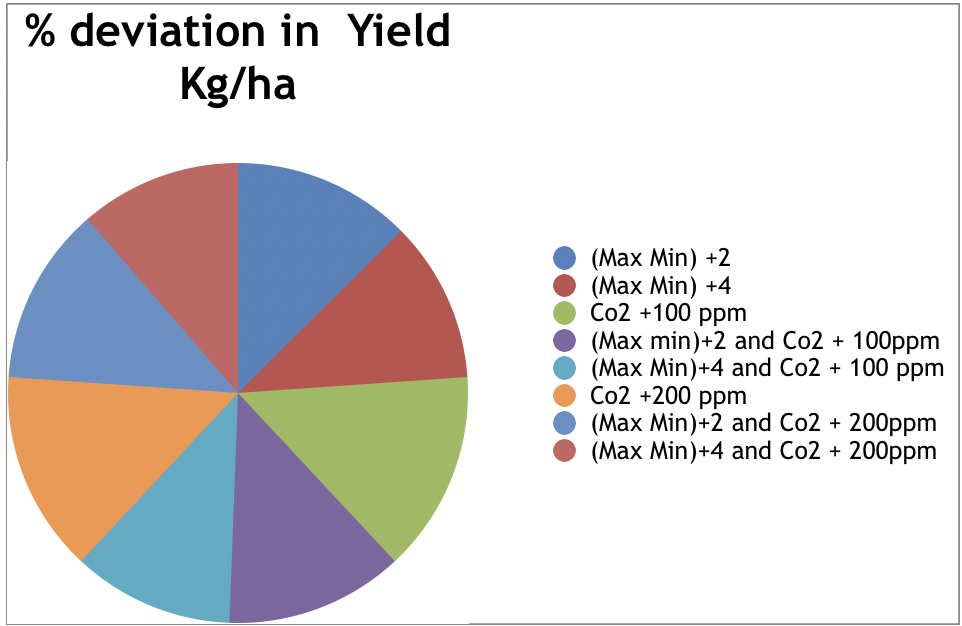 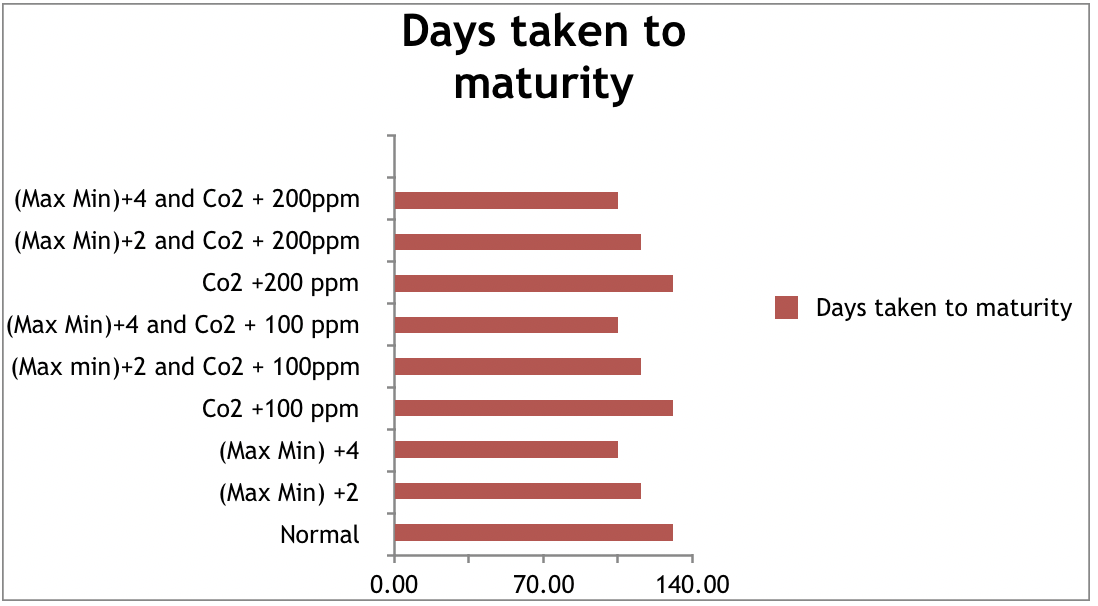 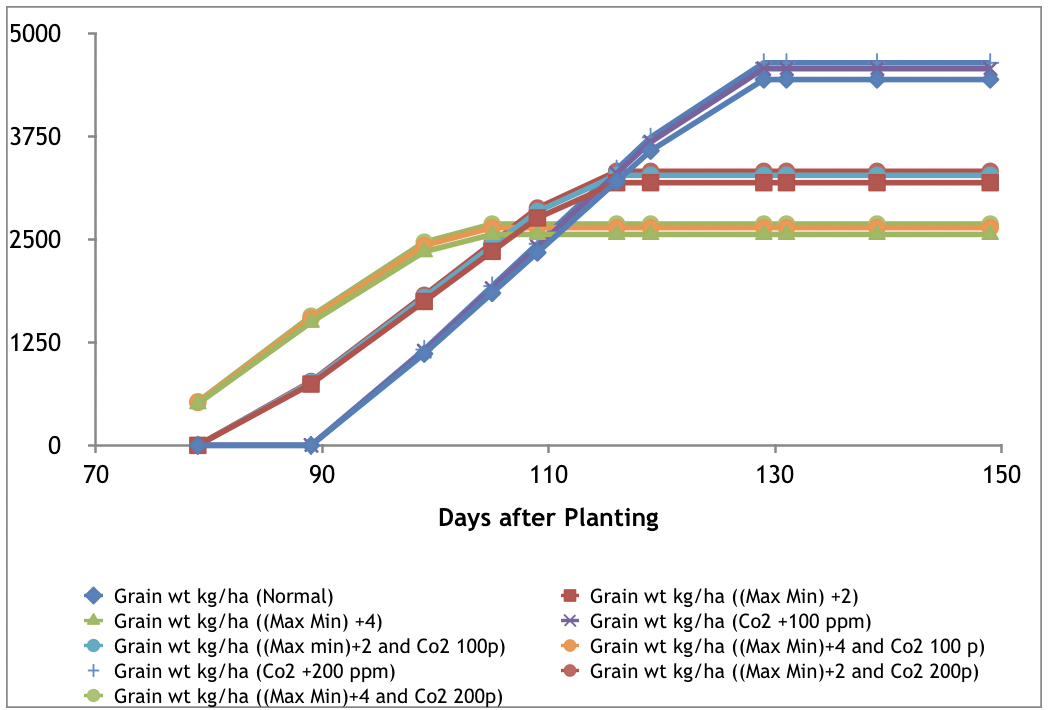 Simulation from CERES Maize model DSSAT 4.5, shows that increase in the temperature by 20C or 40C, alone or in combination with the enhanced levels of CO2 with 100 ppm and 200ppm, drastically reduces the grain yield of maize under temperate conditions of Shalimar, Kashmir. This may be due to the fact that at higher temperature the plants shift earlier from vegetative to reproductive phase ​( Fig 4 & 5​​), less number of days were taken for anthesis and maturity at higher levels of temperature, which causes more biomass but which lower partioning of drymatter towards reproductive phase, ultimately lowering grain yield.

Climate change impacts on crop yield are often integrated with its effects on water productivity and soil water balance. Global warming will influence temperature and rainfall, which will directly affect soil moisture status and groundwater level. Crop yield is constrained to crop varieties and planting areas, soil degradation, growing climate and water availability during the crop growth period. With temperature increasing and precipitation fluctuating, water availability and crop production will decrease in the future. Using DSSAT 4.5 and assuming management practices continue as present, CERES maize model predicted that enhanced level of CO 2 upto 200 ppm will have insignificant impact on crop growth and yield. However increase in temperature by 20C to 4 0C alone or in combination with enhanced levels of CO2 by 100 and 200 ppm the growth and yield of maize will drastically decline with an reduction of about 40% in grain yield. Further studies should be carried out for authentications of these results.