Environmental magnetic measurements are a powerful tool in the assessment of the compositional properties of rocks, sediments and soils. Environmental magnetism is a recent technique which is non-destructive and also cost-effective, used for understanding the environmental conditions during sediment transportation, deposition and transformation of magnetic grains. Among the different enviromagnetic parameters concentration-dependent parameters include SIRM, susceptibility and S-ratio are the most important as far as composition is concerned. 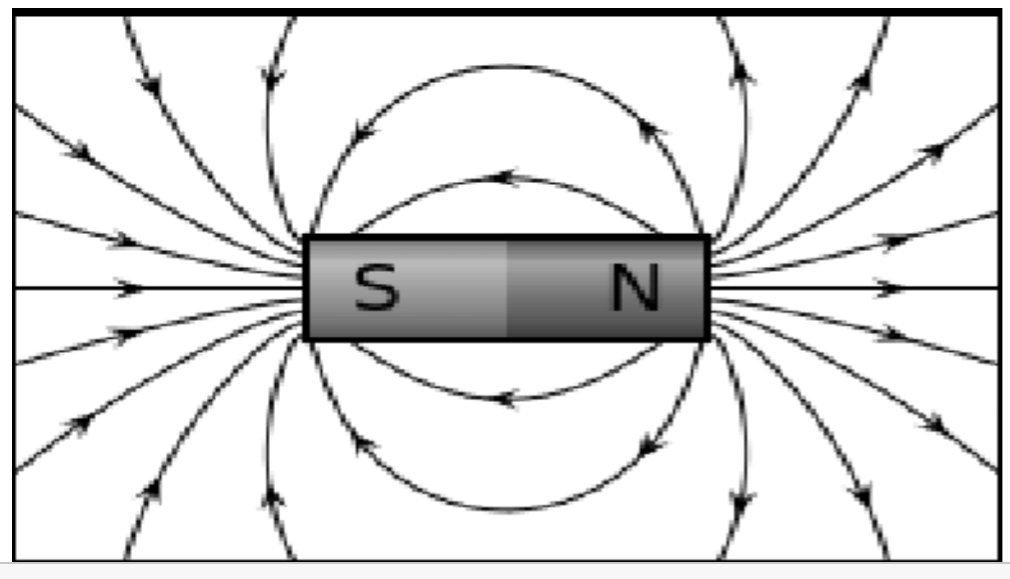 All substances are made up of atoms which are again consist of three elements- electrons, neutron and proton. Electrons which are negatively charges revolve around the positively charged protons and neutrons. If a bar magnet is cut into smaller and smaller pieces indefinitely, still even the smallest piece would show the properties of a magnet. So, magnetism is a property of a substance of atomic level. The negatively charged electrons spin in orbits around the nucleus, much like the Earth revolves around the Sun. The electrons spin as they orbit the nucleus much like the earth spins as it orbits the sun (Fig. 2). As electrons spin and orbit the nucleus they produce a magnetic field. A. M. Ampere first suggested the theory that magnetic fields were due to electric currents continually circulating within.

Depending upon the atoms or ions in a substance it shows different magnetic behavior. The net magnetic moments that an atom or ion shows depends upon the strength of the magnetic field or magnetic moment. The net magnetic moment arises from incompletely filled shells that contain unpaired electrons. The atoms or ions in a solid or substance occupy fixed positions in their regular lattice positions in the crystalline structure. It reflects the symmetry of the substance and also controls the interaction between the atoms or ions. The direction of spin and orbit of the electron determines the direction of the magnetic field. The brief description of different types of magnetic materials are given below:

2. Paramagnetic: In case of paramagnetic materials, the magnetic moment of unpaired electron orbital within individual atoms are uncoupled so that each atom behaves independently. When an external magnetic field is applied the resultant magnetic moment of the electrons aligns in the same direction. The paramagnetic minerals show weak and small positive magnetic susceptibility. Example: Clay minerals, mica minerals.

3. Ferromagnetic: Ferromagnetism is generally associated with elemental iron, nickel and cobalt but it is also seen in many natural substances such as certain very important iron oxides. The atoms occupy close lattice positions so that the electrons can be exchanged easily. This exchange interaction results in a very strong magnetic field which aligns the magnetic moments of the electrons exactly parallel to the external magnetic field. Example: Fe, Ni, Co and many of their alloys. 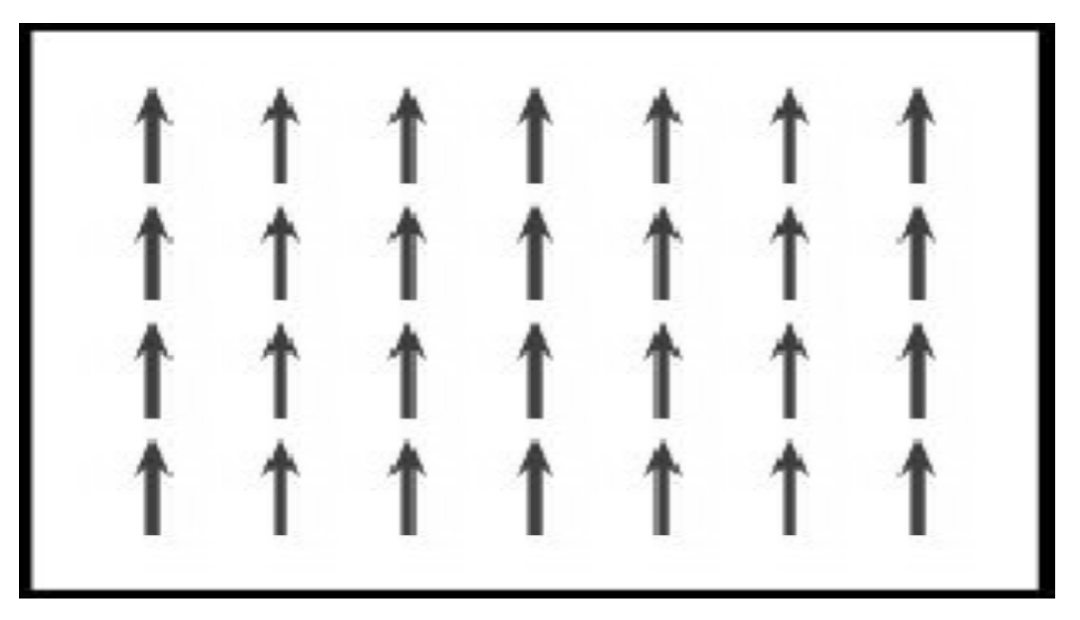 4. Ferrimagnetic: There are certain materials that behave like ferromagnetic materials in absence of external field but their neighboring pairs of electrons point in opposite direction. These materials are called ferromagnetic materials. In these type of substances there is a generation of antiparallel and unequal magnetizations of the sub-lattice resulting in a net spontaneous magnetization. Example-Magnetite(Fe3+[Fe2+Fe3+]O4, Maghemite etc.

5. Antiferromagnetic:- In these type of materials neighboring valence electrons point in opposite direction of each other therefore produces zero magnetic moment .The magnetic moments produced in these materials is equal and antiparallel to the external magnetic field. The susceptibility of such material is weak and positive. Example- Ilmenite (FeTiO3), Troilite (FeS).

6. Canted antiferromagnetic:-Canted ferromagnetism, is a result of impurities or lattice defects and also by spin canting. The electron spin shows not completely antiparallel direction with an inclination at small angle. These materials show moderate positive susceptibility. Example:-hematite, goethite.

Magnetic domain is a region of uniform magnetization in a ferromagnetic and ferrimagnetic mineral. These domains are separated by domain walls with a finite thickness. The magnetic properties like frequency dependent susceptibility, coercivity, and remanence controls the size and concentration of magnetic domains.

A. Single domain (SD): - In small grains with a size of ≤0.2µm, the restricted volume allows only one magnetic domain to form, and so these are termed as single domain grains (SD). 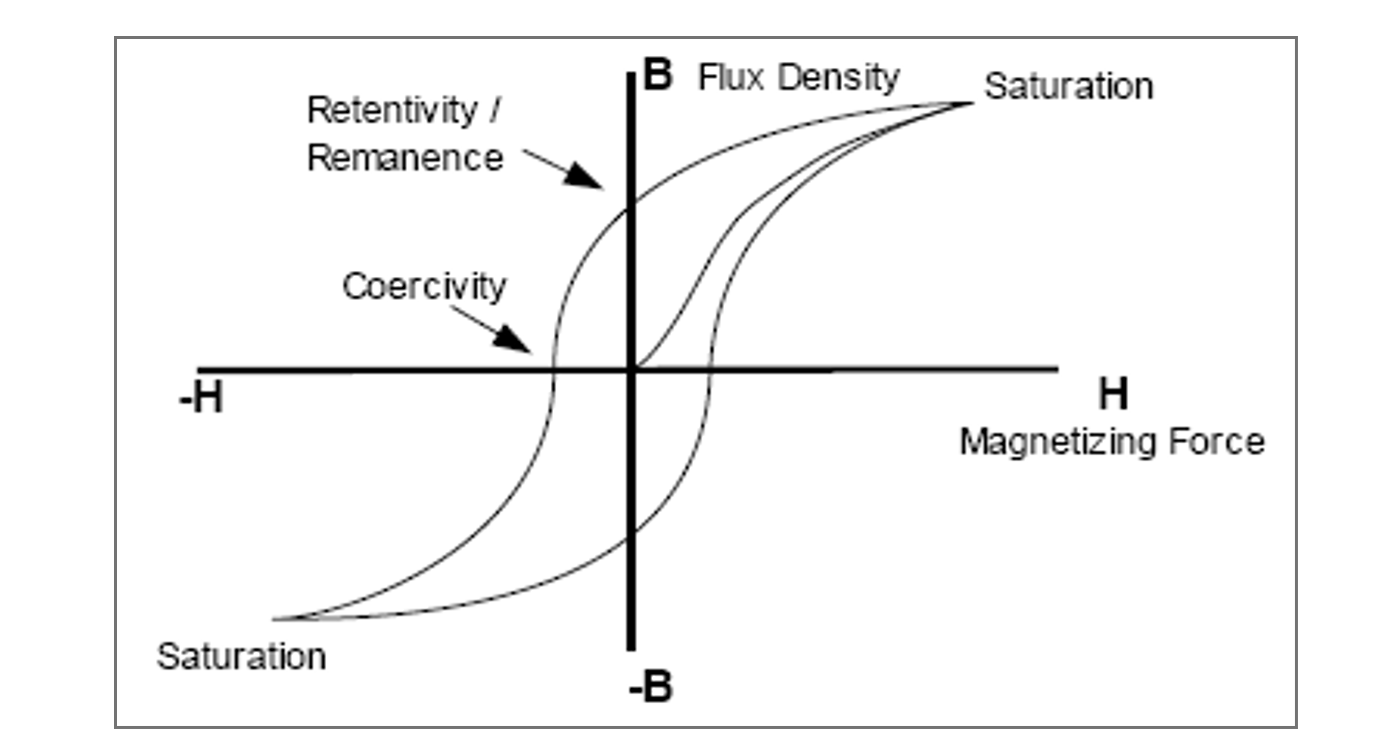 Description of the area

Goa, a coastal state of India, lies within the geographical coordinates located between 14.90-15.800N and 73.68-74.200E with an area of about 3701 km2 and within the geographical coordinates 8.40-12.300N and 75.00-77.000E another south-western coastal state Kerala is situated. Geologically, Goa is a part of the Indian shield mostly covered by metamorphic rocks belonging to the Dharwar Craton of Archean-Proterozoic age. Along the NE border of Goa Late Cretaceous to Eocene Deccan trap rocks are exposed which are further covered by thick layers of aluminous- laterite and laterite of Pliocene to Pleistocene time (Gokul et al., 1985). There are three main geological formations in Kerala namely, the Archeans (oldest rocks), the Warkalli beds of Tertiary Age (Upper Miocene to Pliocene) and the recent deposits (Quaternary) with North-South alignment. The state of Goa (7 rivers) and Kerala (18 Rivers) debouch sediments into the Arabian Sea. The two states have similar weather and are surface exposed rocks/sediments mostly lateritic. The continental margin of India also receive sediments from the other marginal landmass of the Arabian Sea that may be transported via currents, biogenic material from water column. For the present study I have taken two sediment cores off Goa and one core off Kerala from continental margin with following objective

To study rock magnetic properties of sediments off Goa and Kerala. 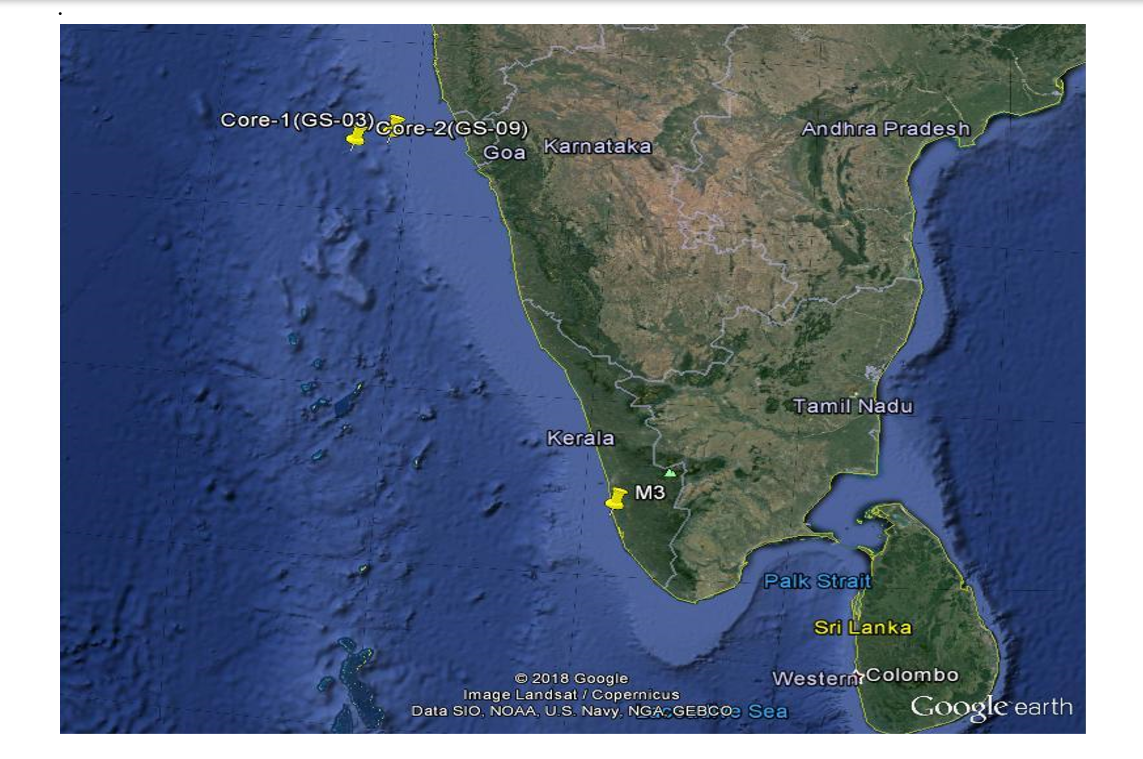 Sample coring technique is used in underground or undersea exploration. Prospecting coring is employed to recover unconsolidated samples of the several layers with the sequence preserved as it is in the depositional sequence. There are different sample coring devices based on which they are named. The off Goa sediment samples were collected by box corer and off Kerala samples were collected by gravity corer.

Box corer:- The box corer is a simple and reliable geological sampling tool for unconsolidated or soft sediments in the lakes and oceans. It is designed in such a way that the sediment surface is not disturbed by the wave action. A box corer is deployed from a research vessel and with a wire and is also suitable for any water depth. 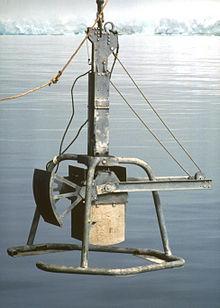 Gravity corer:-It is a geological tool to collect sediments cores from deepwater sites and coastal areas. The corer consists of steel core barrel, which uses the pull of gravity to collect sample from seabed of up to six meters in length. 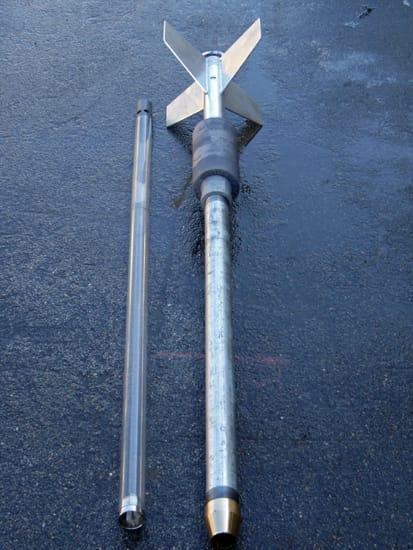 The required amount of oven-dried samples were taken, crushed and wrapped by thin polythene films followed by packing in the cylindrical non-magnetic pre-weighted sample holders. The sample weight was taken by the digital laboratory balance (Fig12a)

Magnetic susceptibility meter and the sensor

Anhysteretic remnant magnetization is imparted on the sediment samples by superposing a constant biasing field of 0.05mT intensity on a smooth decreasing AC field from peak of 100 mT in Alternating field magnetizer. All particles with remanent coercivity equal to or less than the maximum will become magnetized along the constant biasing DC field. Through various Geological processes over a period of time rocks acquire their Natural Remanent Magnetism (NRM). NRM is vector sum of various components. So it becomes very difficult to identify its various components. Using Molspin alternating field demagnetizer (Fig.14) allows us to cancel

Components one at a time and thus we can isolate them.

Using this Pulse magnetizer (Fig.15) instrument we can apply various magnetic field to the 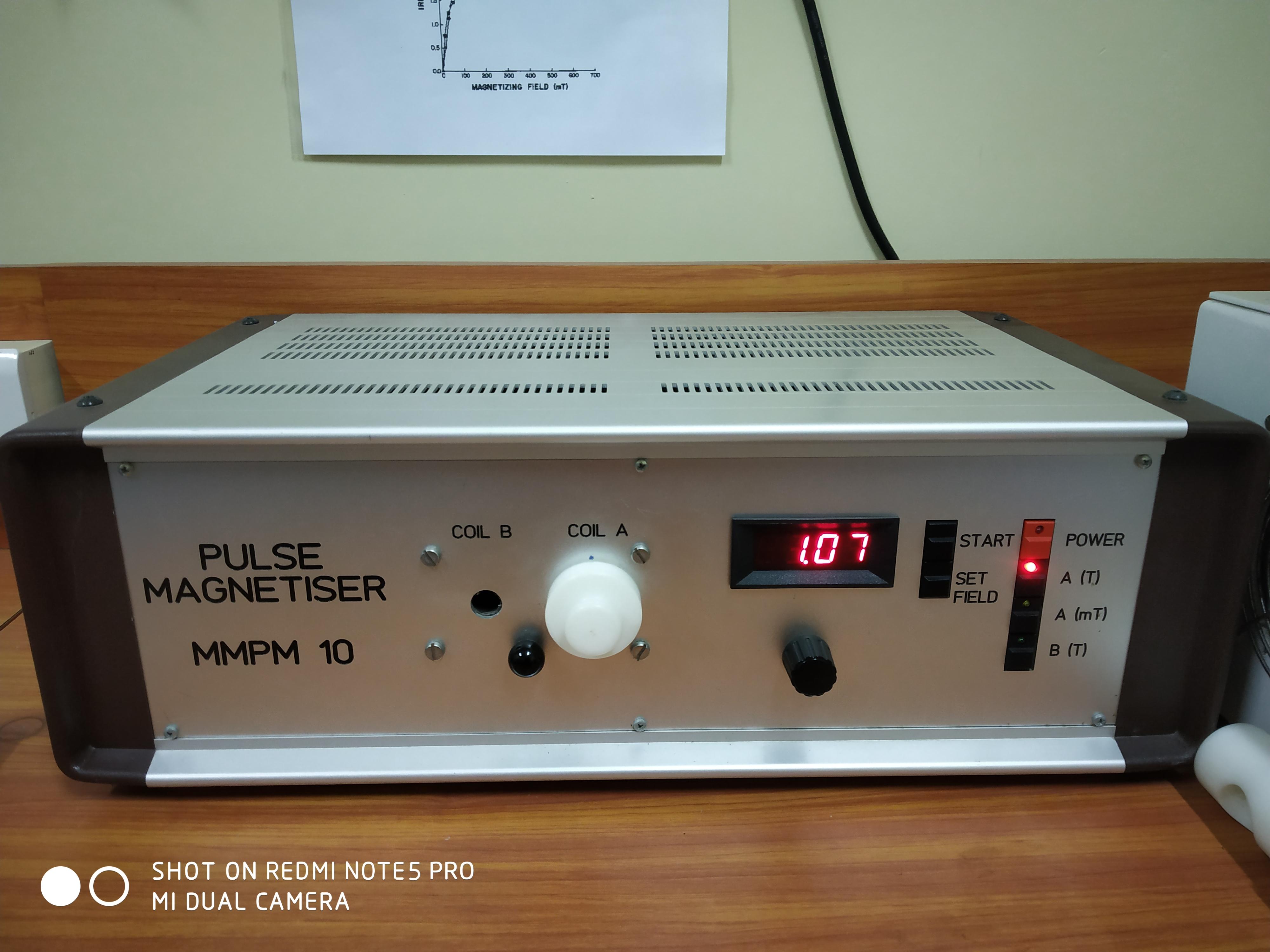 A spinner magnetometer (Fig 16) rotates the sample around a fixed axis inside an annular-shaped magnetometer. Variations of the sample's magnetic field are picked up by the magnetometer and converted into voltage variations which provide output. Since the formation of the old sediments and rocks, they have been subjected to different types of environments which results in different levels and orientation of magnetization of the samples. As they have different levels and orientations of magnetization they act as vectors. A spinner magnetometer is able to measure the total natural remanent magnetism, which is the sum of all the vectors. 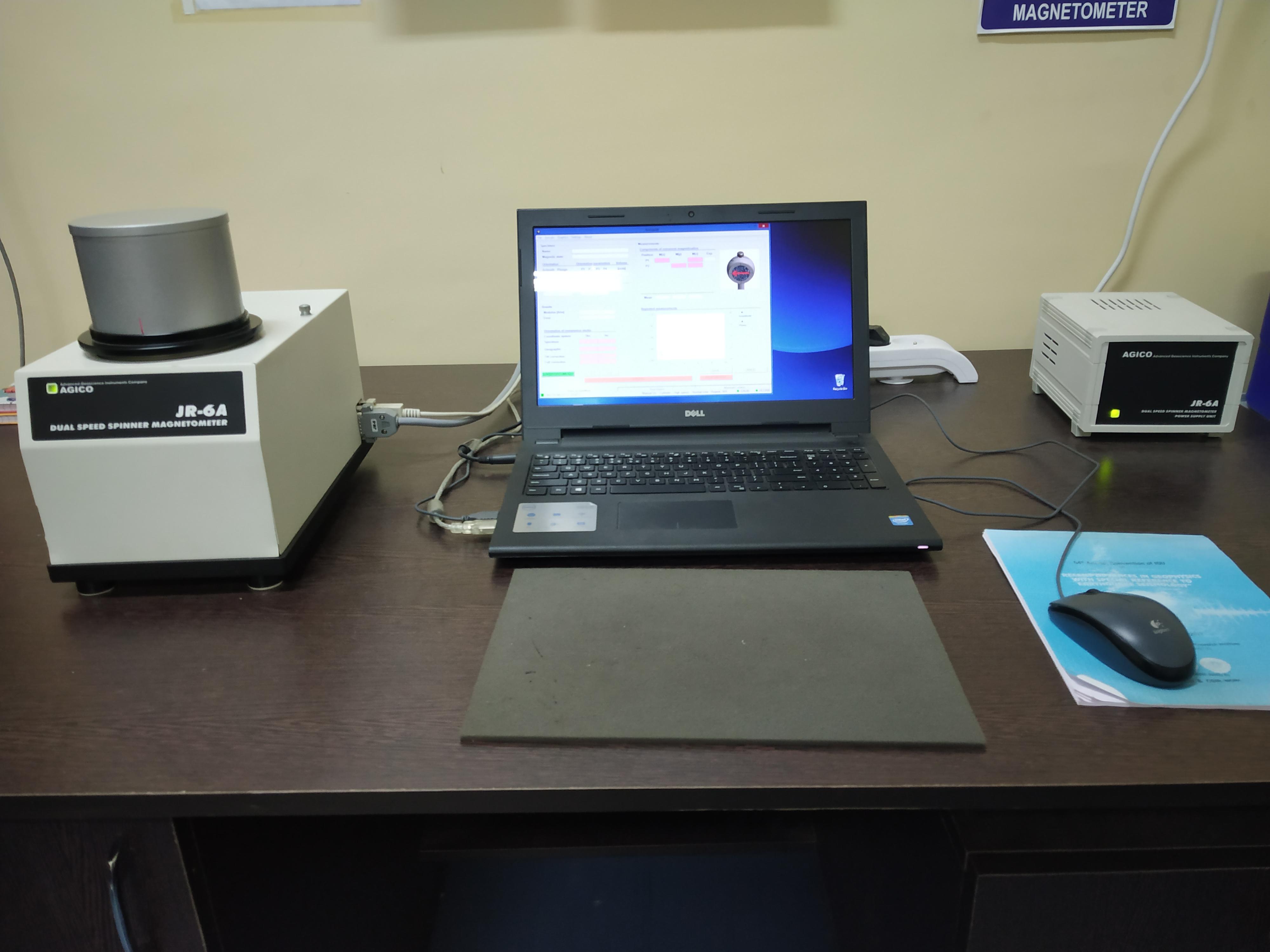 Total of 219 samples from three cores (two off Goa and one off Kerala) were analyzed for the different rock magnetic properties and calculations were carried out using standard formulas given in Thompson and Oldfield (1986). The data are presented in the table 1 and Figures 17-18.

Range and mean values of magnetic parameters in sediment cores from Goa and Kerala. 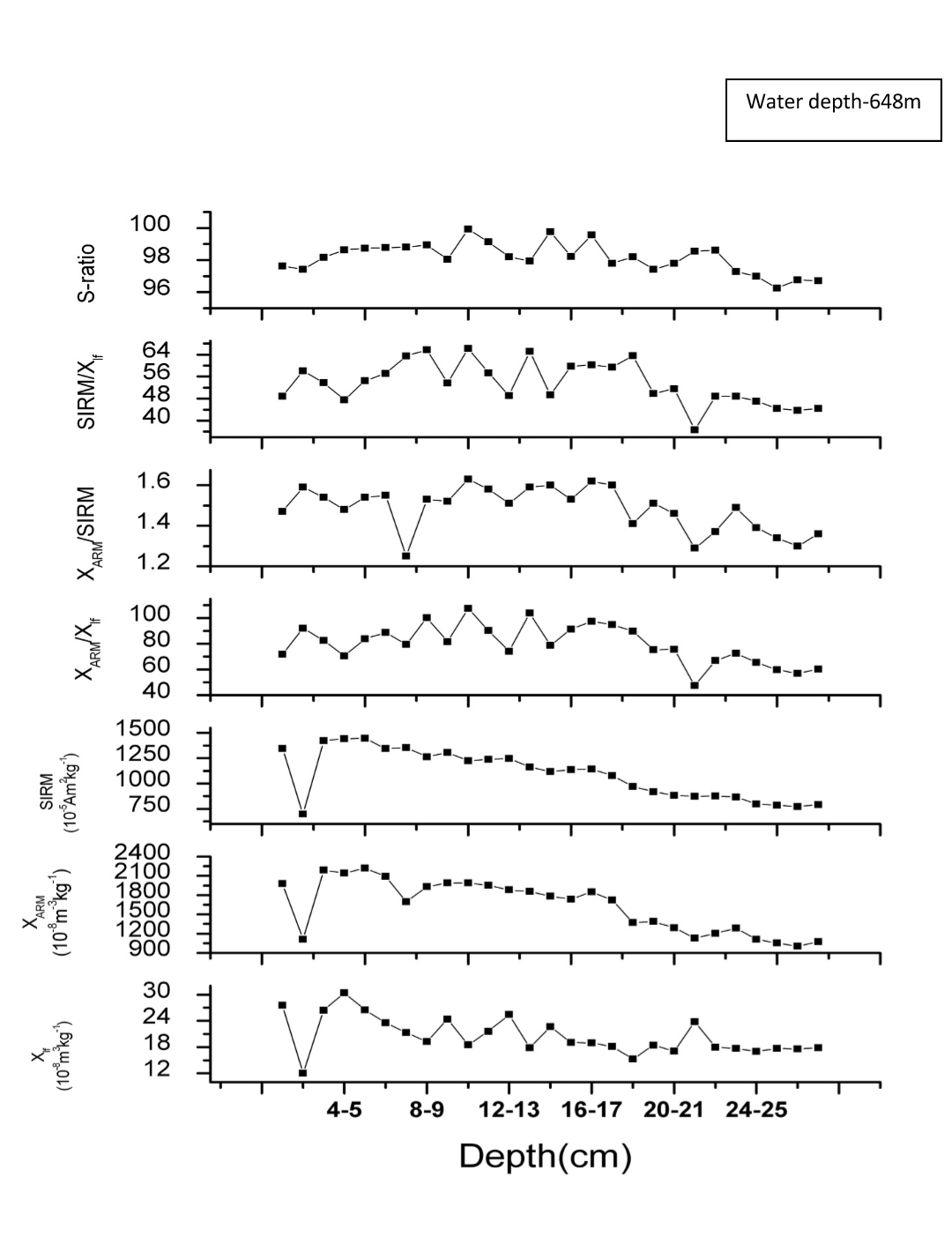 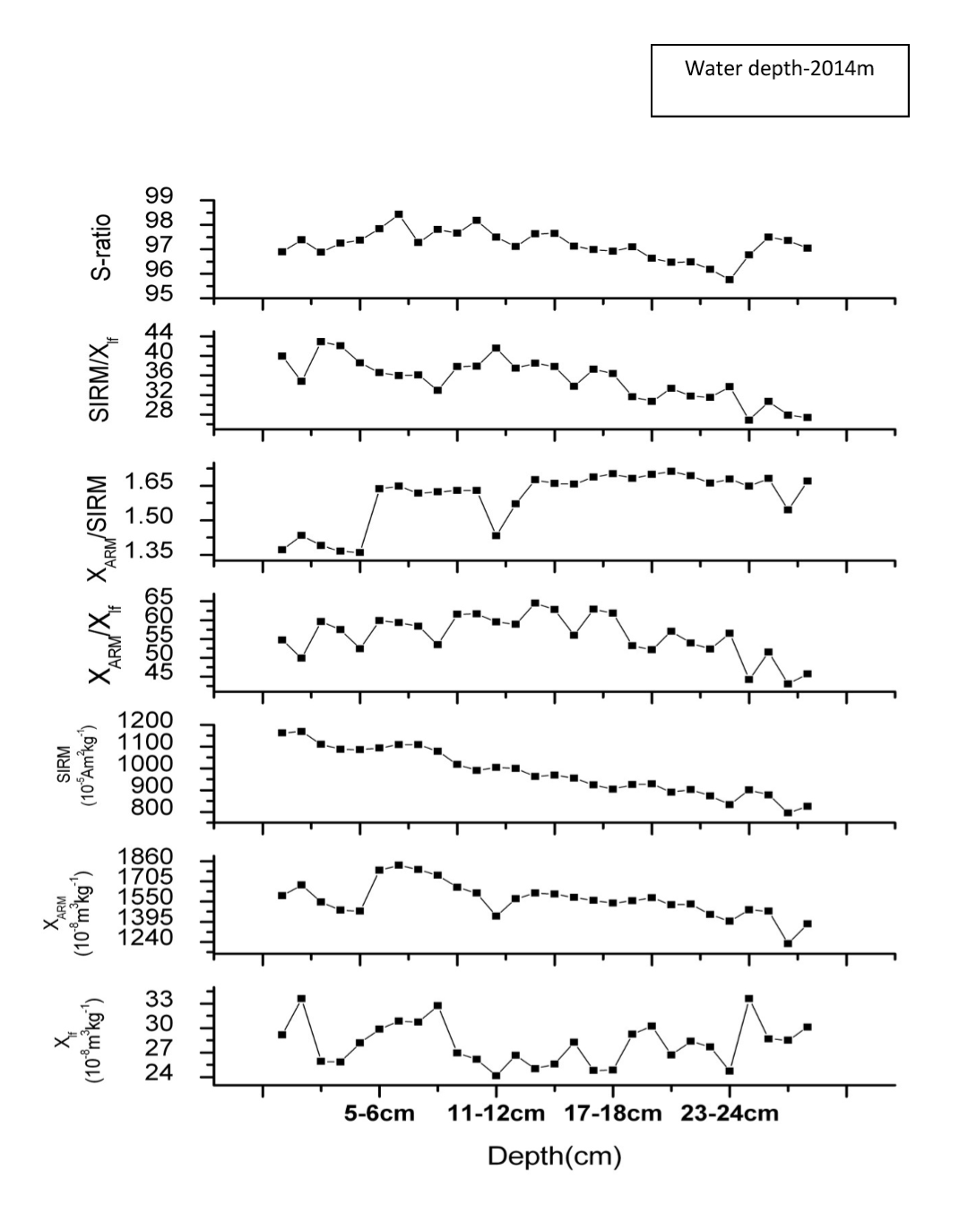 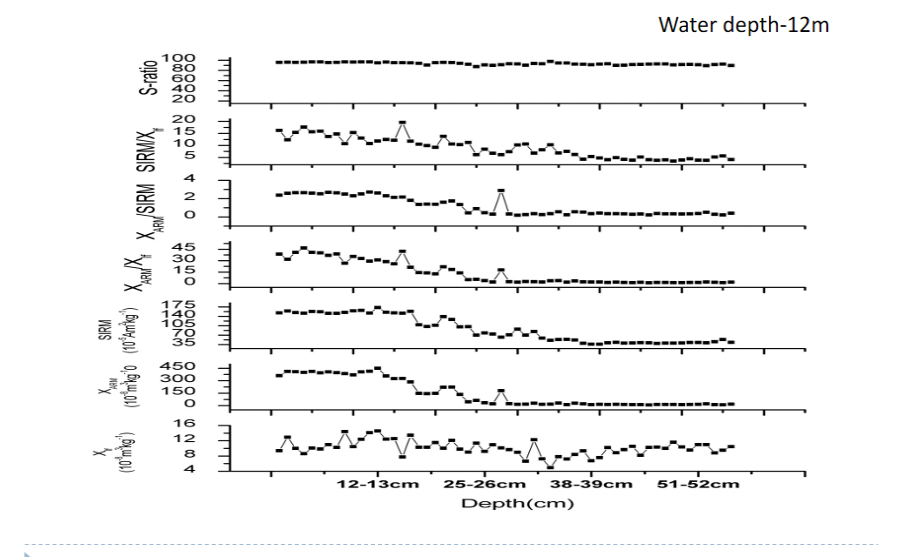 The down core variations in profile of the parameters like χlf, χARM SIRM reveals values gradually decreasing with depth and showing abrupt decrease within depth range of 3-4cm. The average values of χlf,’ χARM, SIRM are 20.52 ×10-8m3kg-1, 1631.11×10-5m3kg and 1093.03×10-5Am2kg-1respectively. Higher concentration of the XARM and SIRM indicate high concentration of the fine grained minerals.

High value of SIRM and ARM values indicate the presence of grains with single-domain (Thompson 1986). In this core the values of SIRM is decreasing gradually with depth with an abrupt decrease within 3-4 cm depth. The higher values of χARM/χlf, , χARM/SIRM are indicating fine grain size. Whereas higher values of SIRM/χlf ratio indicate coarse grain sized sediment (Oldfield, 1991;Thompson and Oldfield, 1986). These ratios have average values of 80.02, 1.48×10-3mA-1.

Mineralogy of the magnetic grains

IRM is a direct measure of magnetic mineralogy and grain size (Oldfield et al., 1999). S ratio has mean of 98.16 indicating that magnetite to me the dominant mineral.

The χlf value of the sediments varies distinctly from 33.615114 ×10-8m3kg-1 to 24.15663 ×10-8m3kg-1.The average value of χlf is 28.11612×10-8m3kg-1.For the middle depth range the value of χlf is almost constant. On the surface this value is little less, increase with depth and again shows decreasing value of concentration of magnetic minerals. At around 24-25cm depth the maximum concentration is achieved for this core. SIRM values ranges from 1168.56×10-5Am2kg-1 to 795.17×10-5Am2kg-1, which also indicate direct concentration of fine grained magnetic minerals. ΧARM is showing values varying from 1227.89×10-8m3kg-1 to 1828.35×10-8m3kg-1. Only near the surface and about 26-28 cm depth range these values are in decreasing trend with relatively same values in middle depth. High Xlf values average 28.12 x10-8m3kg-1 indicate higher concentration of the magnetic grains as compared to the core GS-03. The low average values of XARM and SIRM indicate that in GS-09 core concentration of the fine grain minerals are lower as compared to the core GS-03.

The S-ratio, which is a mineralogy indicator, varies from 95.76 to 98.43 with an average value of about 97.18 .The high S-ratio indicate the of magnetite to be the dominant mineral.

The average value of χARM/χlf and χARM/SIRM are 13.54 and 1.15×10-5mA-1. As the higher values of χARM/χlf and χARM/SIRM indicate presence of fine grain sized magnetic minerals and higher value of SIRM/χlf indicates coarse grained mineral grains(Oldfield, 1991;Thompson and Oldfield,1996;Walden,1999). In the upper depth ranges or near the surface the higher values of χARM/χlf and χARM/SIRM ratios give information about presence of fine grained magnetic minerals in the samples, whereas the lower values of these ratios in the lower depth indicate presence of grains with coarse grain size. In about 25-26 cm depth there is a abrupt increase in these ratios which infers that the grain size is fine.

The maximum S-ratio value is 92.11 with the range is from 24.63 to 97.70. It is almost constant throughout the whole depth of sediment core indicating same mineralogy (Magnetite) for the whole core sample.

The enviromagnetic properties of the sediment cores off Goa and Kerala, west coast of India, provide clear information about the change in mineralogy of the sediments, grain size and concentration of magnetic minerals.

Magnetite is found to be the dominant mineral in all three cores.

Concentration of magnetic minerals is higher in the cores off Goa as compared to the Kerala.

High magnetic mineral concentration off Goa cores can be related to the iron mining/ iron ore bodies in Goa.