The objective of this project is to understand energy bands of solids by studying the Huckel model. We use numerical methods to determine the energies of polyene chains and rings. I wrote Fortran programmes to generate Huckel matrix and used a standard numerical package for determining the eigenvalue.

Huckel molecular orbital theory: It was proposed by Enrich Huckel. It is the linear combination of atomic orbitals, and is used to determine the energies of molecular orbital of pi electrons in conjugated hydrocarbon systems. Huckel's method in its original form makes qualitatively accurate and chemically useful predictions.

Band theory: In solid-state chemistry, band theory is a model that describes the states of electrons that can have only certain specific energies. The electrons in solids experience a periodic potential in direct contrast to the electron in free space where the potential is zero. Free electrons can assume any energy but electrons in solids can have only allowed energies. The allowed energies of electrons in a solid form a band. Certain ranges of energies between two such allowed bands are called forbidden bands i.e., electrons within the solid cannot possess these energies. The band theory accounts for many of the electrical and thermal properties of solids and forms the basis of the technology of solid-state electronics.

Computational chemistry describes the use of computer modeling and simulation, including ab initio approaches based on quantum chemistry, and empirical approaches based on quantum theory and empirical approaches- to study the structures and properties of molecules and materials. But, as the number of carbon atoms increases, the calculation becomes difficult. In such a condition, we can use a computational approach and can determine the energy states of polyene chains and rings. By using Huckel matrix, we can calculate the energy of the system and from that we can calculate the density of states.

An electronic calculation from first principles (ab initio) presents a number of challenges. Many integerals must be evaluated followed by a self consistent process for assessing the electron-electron interaction and then the electron correlation effect must be taken into account. Semi empirical methods do not proceed analytically in addressing these issues, but rather use experimental data to facilitate the process. Several such methods are available. These methods are built on the work of Huckel.

One of the first semi empirical methods to be developed was the Huckel Molecular Orbital (HMO ) theory. HMO was developed to describe the molecules containing conjugated double bonds. HMO considers only electrons in pi orbitals and ignores all other electrons in a molecule. It was successful because it could address a number of issues associated with a large group of molecules at a time when calculations were done on mechanical calculators.

• An approximation introduced by Hü​ckel in 1931 considers only the delocalized p electrons moving in a framework of π-π bonds. This is, in fact, known as the free electron model.

• The simplest hydrocarbon to consider that exhibits π-π bonding is ethylene (ethene), which is made up of four hydrogen atoms and two carbon atoms. Experimentally, we know that the H–C–H and H–C–C angles in ethylene are approximately 120°.• This angle suggests that the carbon atoms are sp2 hybridized.

Fig (a): The σ-bonded framework is formed by the overlap of two sets of singly occupied carbon sp2 hybrid orbitals and four singly occupied hydrogen 1s orbitals to form electron-pair bonds. This uses 10 of the 12 valence electrons to form a total of five σ bonds (four C–H bonds and one C–C bond). Fig (b): One singly occupied unhybridized 2pz orbital remains on each carbon atom to form a carbon–carbon π bond. (Note: by convention, in planar molecules the axis perpendicular to the molecular plane is the z-axis.)

• Within the Hückel approximation, the covalent bonding in these hydrocarbons can be separated into two independent "frameworks": the σ-bonding framework and the π -bonding framework. This is referred to as sigma-pi separability and is justified by the orthogonality of σ and π orbitals in planar molecules.

• The Hückel approximation is used to determine the energies and shapes of the π molecular orbitals in conjugated systems.

Since Hückel theory is a special consideration of molecular orbital theory, the molecular orbitals |ψi⟩ can be described as a linear combination of the 2pz atomic orbitals ϕ at carbon with their corresponding {ci } coefficients:
∣ψi​⟩=c1​∣ϕ1​⟩+c2​∣ϕ2​⟩ (1)

This equation is substituted in the Schrödinger equation: H^∣ψi​⟩=Ei​∣ψi​⟩ (2)

with H^ the Hamiltonian and Ei the energy corresponding to the molecular orbital to give:

If Equation (3) is multiplied by ⟨ϕ1|(and integrated), then

where Hij and Hii and Hjj are the Hamiltonian matrix elements

Both Equations (4) and (7) can be better represented in matrix notation,

in the form of a product of matrices

Within linear algebra, the secular equations in (9) will also have a non-trivial solution, if and only if, the secular determinant is zero.

There will be two values of 'E' which satisfy this equation and they are the molecular orbital energies.

Solving the secular determinant is simplified within Hückel method via the following four assumptions:

ͼ All overlap integrals Sij are set equal to zero. This is quite reasonable since the π− orbitals are directed perpendicular to the direction of their bonds .

ͼ All resonance integrals Hij between non-neighboring atoms are set equal to zero.

ͼ All resonance integrals Hij between neighboring atoms are equal and set to β.

ͼ All coulomb integrals Hii are set equal to α.

These assumptions are mathematically expressed as

The trivial solution gives both wavefunction coefficients equal to zero and the other (non-trivial) solution is determined by solving the secular determinant. 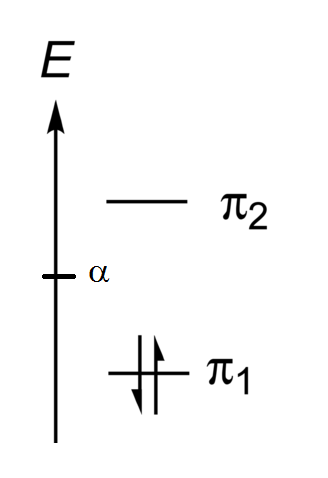 π energies of ethylene with occupation

It is a theoretical model describing the states of electrons, that can have only certain specific energies. The electrons in solids experience a periodic potential in direct contrast to the electron in free space where the potential is zero. Free electrons can assume any energy but electrons in solids can have only allowed energies. The allowed energies of electrons in a solid form a band. Certain ranges of energies between two such allowed bands are called forbidden bands i.e., electrons within the solid cannot possess these energies. The band theory accounts for many of the electrical and thermal properties of solids and forms the basis of the technology of solid-state electronics. Valence band is the highest range of electron energies in which electrons are normally present at absolute zero temperature, while the conduction band is the lowest range of vacant electronic states. 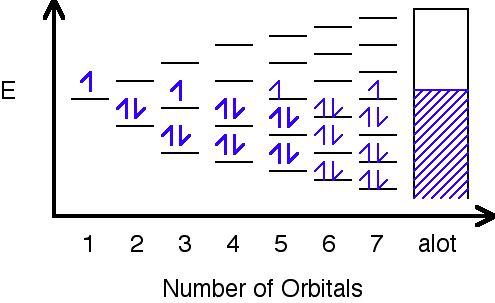 In this image, orbitals are represented by the black horizontal lines, and they are being filled with an increasing number of electrons as their amount increases. Eventually, as more orbitals are added, the space in between them decreases to hardly anything, and as a result, a band is formed where the orbitals have been filled.

Different metals will produce different combinations of filled and half filled bands. 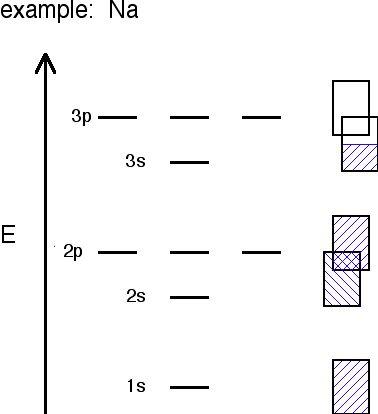 The E in the equation stands for the Fermi in energy or energy gap. 't' stands for temperature, and 'R' is the gas constant.

Metals are conductors. There is no band gap between their valence and conduction bands since they overlap. There is a continuous availability of electrons in these closely spaced orbitals.

There are two different kinds of semiconductors: intrinsic and extrinsic.

Density of states: In [solid state] the density of the states of a system describes the number of states per interval of energy at each energy level available to occupy.

It describes the use of computer modelling and simulation – including ab initio approaches based on quantum chemistry, and empirical approaches – to study the structures and properties of molecules and materials.

1. Computational studies can be carried out to find a starting point for laboratory synthesis, or to assist in understanding experimental data, such as the position and source of spectroscopic peaks.

2. Computational studies can be used to predict the possibility of so far entirely unknown molecules or to explore reaction mechanisms that are not readily studied by experimental means.

There are two main branches of computational chemistry:

ͼ one is based on classical mechanics, (`molecular mechanics'(MM) or``force-field'' method ).

ͼ The second category, semi-empirical, includes methods which make serious approximations to the quantum mechanical laws and then employ a few empirical parameters to (hopefully) patch things up. These methods include the modified neglect of differential overlap (MNDO), Austin Model 1 (AM1),

Objectives of the project

The report addresses the following questions.

These are the questions or objectives that I am trying to solve through this project.

For One Dimensional Systems 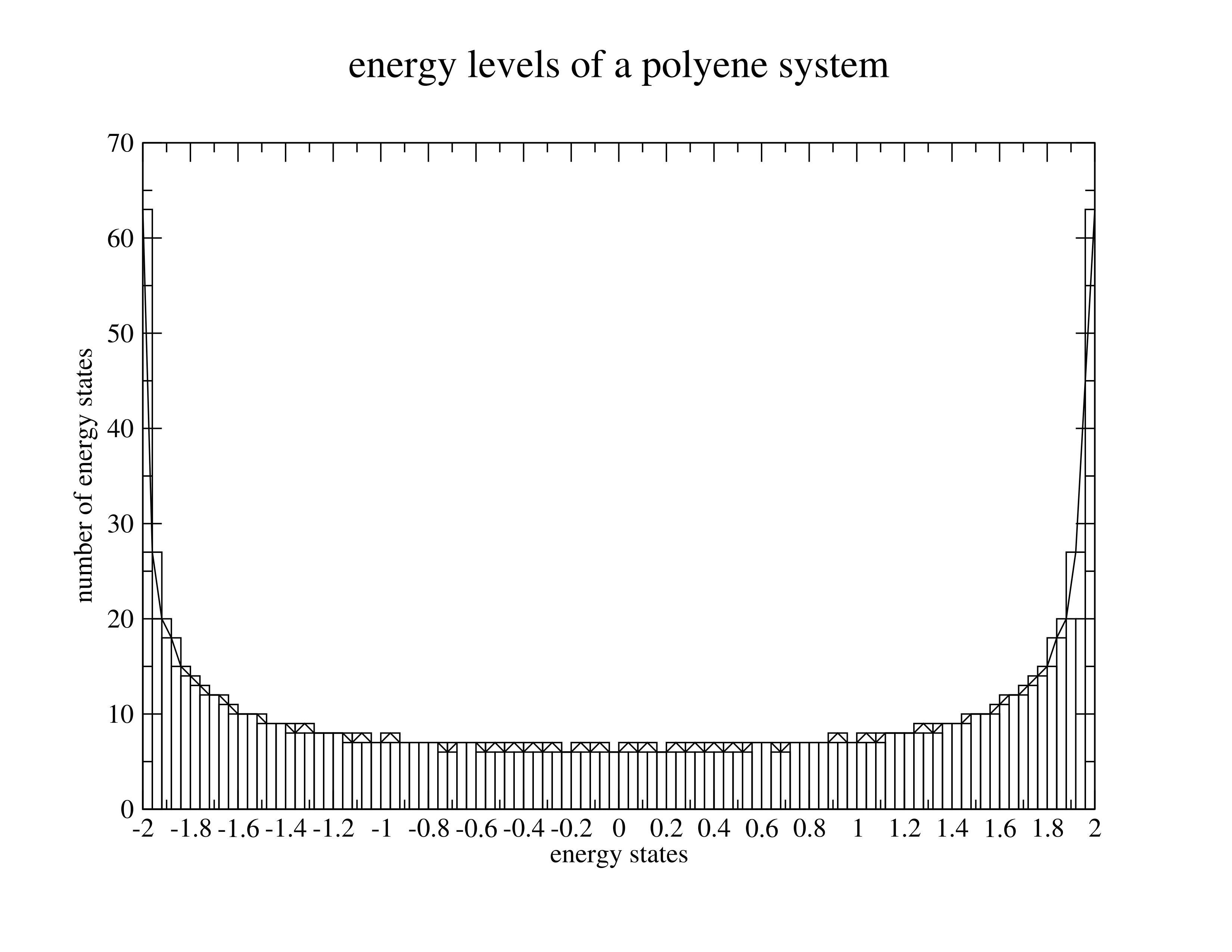 This plot shows the density of states for a one dimensional system without dimerization and is obtained by plotting energy states Vs the number of energy levels in a polyene system with one thousand carbon atoms. Each atom contributes one π electron. The system has a half filled band and we call this system a metal. By analyzing the plot we can understand that there is no energy gap and the density is never becoming zero. For a uni-dimensional system with dimerization, the plot obtained is given below 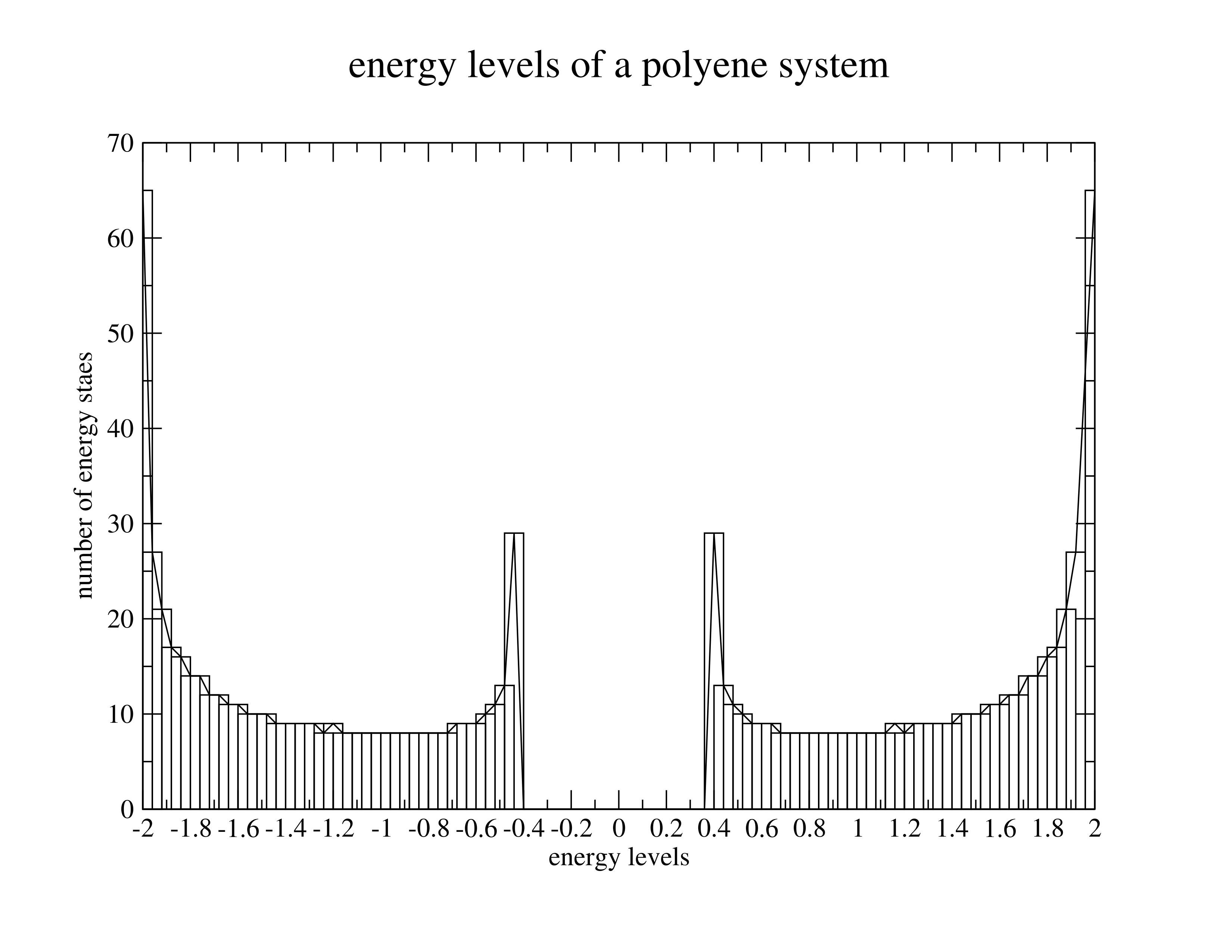 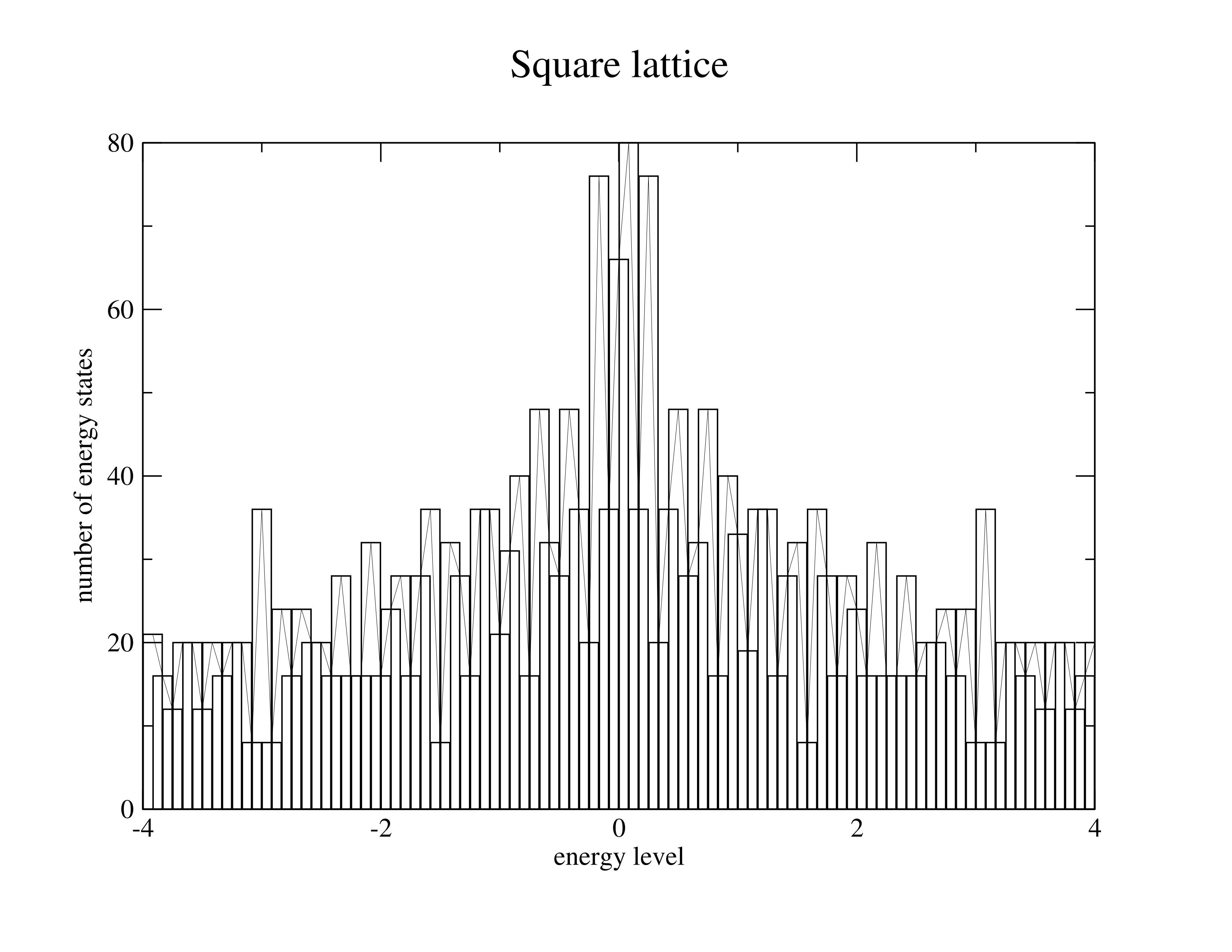 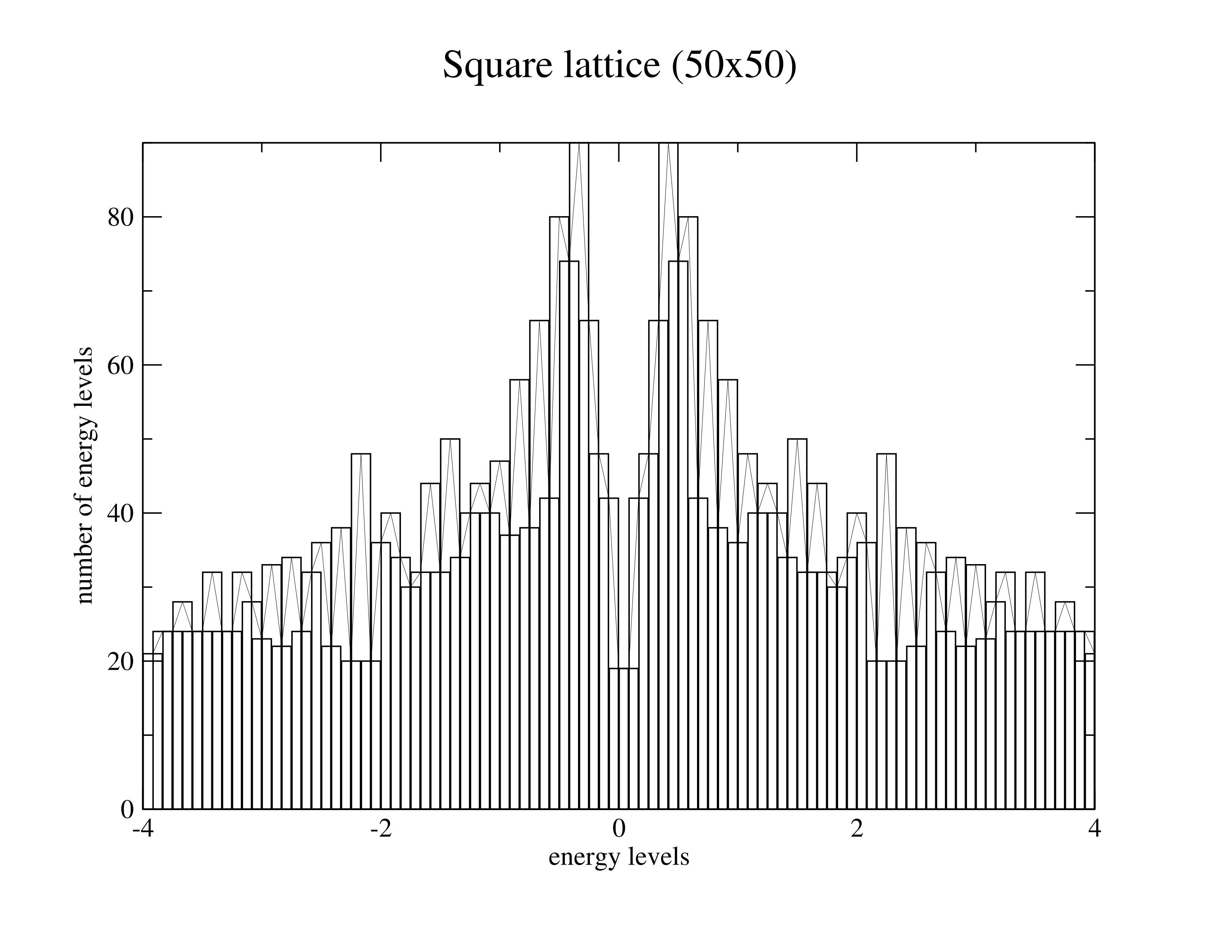 In short , I have formulated codes using the computer language Fortran77 and run the codes for various samples. And the steps are:

From the plot I was able to understand that the system under study is a conductor(metal) or a semiconductor (metal). Also, how the valence band and the conduction band emerges. What is the reason for the formation of band gap? etc.... were clearly understood from the work

The limitations of Hückel theory are:

ͼ It is very approximate

ͼ It cannot calculate energies accurately. For example, the repulsion between electrons is not calculated.

Here comes the importance of extended Huckel theory (EHT), developed by Roald Hoffmann, is much like the HMO method for conjugated hydrocarbons, but it can be applied to virtually any molecule, conjugated or not. The EHT method separates the valence-shell electrons from the inner-shell nonbonding electrons and treats the former in an explicit, albeit parametric,manner.

First and foremost, I would like to thank my guide Prof. S. Ramasesha, SSCU department of Indian Institute of Science, Bangalore, for providing me an incredible opportunity to carry out my M.Sc project under his guidance, for his immense knowledge, continuous support, guidance, motivation and valuable advice at every stage of this project.

I am thankful to IISC Bangalore for giving me a wonderful platform to work with academic excellence, along with the Indian Academy Of Sciences, without them I would not have been here.

I am extremely thankful to Prof. Tomy, the Head of the Department of Chemistry, CMS College, Kottayam, for giving me an opportunity to work on a project and providing necessary help at every stage of this project.

I am sincerely thankful to Dr. Vibin Ipe Thomas, Assistant professor, Department of Chemistry, CMS College, Kottayam, and my mentor, who always stood beside me and directed me in the right path.

Besides my guide, I express my sincere gratitude to Dr. Anasooya, for her continuous support, guidance and help in every step of this project with her patience and knowledge. I sincerely thank her from the bottom of my heart.

I am extending my deepest thanks to Sambunath Das, Sumit, Geethanjali for their support and providing me a pleasant and friendly atmosphere to work. Their constant encouragement, guidance and support have been a major factor in understanding deep ideas in Computational Chemistry.

Words are inadequate to express my feelings for my parents and my brother for their love and whole hearted support for executing this project.

I also express my profound gratitude to my friends and family for their love and support.

Above all I thank God Almighty for his blessings and presence.