A cascaded refrigeration system is a very energy efficient method to achieve refrigeration at evaporator temperatures below -20 0C with an added advantage of getting refrigeration at different levels of evaporator temperatures. A comparative study is done on various refrigerants working with various compressor models with the help of compressor selection software for different operating conditions and the cooling capacities required. Cascading possibilities for different refrigerants are studied based on fixed cooling loads. Further, the viability of using a trans-critical and subcritical CO2 cascade is explored using different compressor selection matrices. All collected and calculated data is used to establish the most-suited model for compressor selection based on a user-defined criteria such as higher COP, volumetric and isentropic efficiencies or easier maintenance or lesser energy consumption and emission.

Compressors are the heart of any refrigeration and air conditioning plant and justly the costliest component. Hence, a great deal of effort is put into the selection of the perfect compressor model for the given requirements. Most of the compressor manufacturers provide their selection software to accomplish this task. It is surprisingly noted that none of these manufactures provide parameters such as volumetric and isentropic efficiency which are important as well as decisive factors in compressor selection. Thus there is a need for development of a selection model which takes the above stated parameters into account.

Single stage compression cycle can be shown on p-v curve (​Fig 1​​). Process 4-1 is intake, 1-2 is compression and 2-3 is discharge. Specific volumes v3, (v1-v3), and (v1-v4) are clearance volume, swept volume and actual intake volume respectively. Also process 1-2 is isentropic, hence the compression ratio is given by 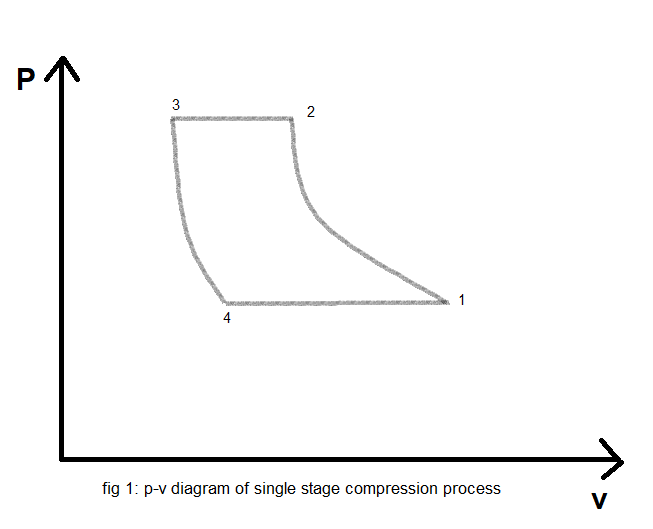 It is defined as the ratio of actual volume of gas intake to the idle intake volume or swept volume of the piston. Thus

where, ε= clearance ratio which is ratio of clearance volume to swept volume and is given by

Process 1’-2’ is isentropic compression, process 2’-3 is condensation, process 3-4 is isenthalpic expansion, process 4-1 is useful evaporation and process 1-1’ is superheating before suction to insure only gaseous intake. 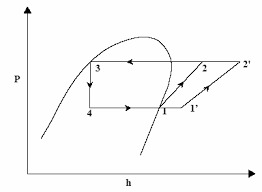 It is the ratio of idle compressor work to the actual compressor energy input.

In this system, the same refrigerant is used in the LTC and HTC and the thermodynamic cycle representing it is shown in ​Fig 4​ along with each process. A single state curve is present representig a single refrigerant both in HTC and LTC. 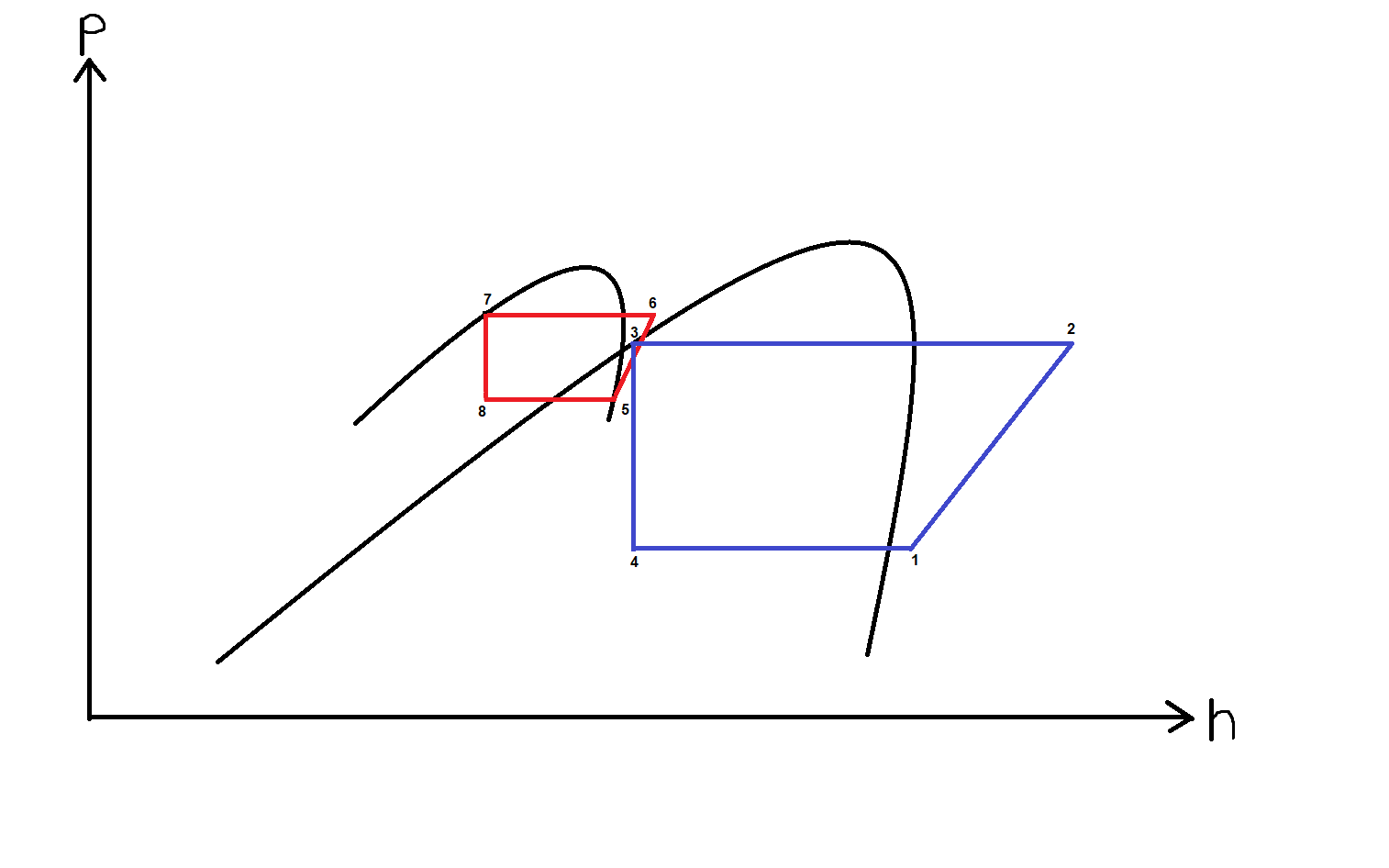 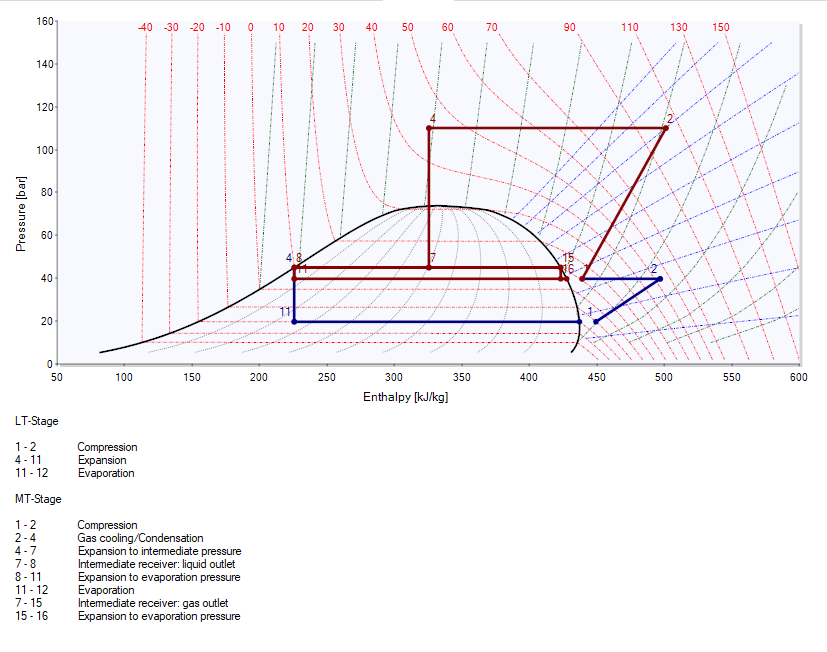 Taking into account the present concerns of global warming and climate change, it is necessary to have an idea of emisions from compressors. As compressors use refrigerants which pose dangers for our environment, their emisssions need to be calculated and checked. Also, compresssors require a high amount of electrical energy to run on, which may be from a polluting source such as thermal power plants.

These are emissions in the form of direct leakage of refrigerants from the the compressor system mostly from the cylinder through the sides of piston rings or from other loosely packed components. We usually consider about 3-5% of the total refrigerant charge to have leaked anually. Now, to compare this leaked refrigerant with GHG we multiply the leakage (in Ton) to GWP. The higher the GWP the more dangerous the refrigegrant is for the environment. Therefore, need is to develop and use refrigerants with lower GWP.

These emissions occur due to the nature of the source of electrical power. A source is considered to be emitting a certain amount of GHG per KWh of energy that it produces. By convention, it is considered that for each KWh of electrical energy produced there is 1 Kg of CO2 (GHG) produced in developing countries like India. Hence, it is evident that to avoid such emissions we need to select a more energy efficient model of compressors for a given cooling load.

6. Emissions both direct and indirect were calculated considering an average 8 hours of daily usage. GWP value for each refrigerant is used to compare the direct emission with that of the GHG.

7. Possibilities of cascaded refrigerant cycles were analyzed for maximum COP, based on criteria of operating conditions and minimum volumetric efficiency of 80%. Both cascades, among the same refrigerant (intra cascade) and among different refrigerants (inter cascade), were analyzed.

8. Cascading was done based on fixed cooling capacity of LTC and HTC as well as by varying the number of compressor units required when running at a fixed operating condition which is, evaporation and condesnation temperatures of -200C and 100C respectively for LTC and evaporator and gas exit temperature at 110 bar of 50C and 450C respectively for HTC. Subcritical CO2 in LTC and trans-critical CO2 in HTC were considered. Trans-critical compressor models were used, working in subcritical mode for LTC and trans-critical mode for HTC. After this, parameters such as isentropic and volumetric efficiencies, COP for both HTC and LTC, total number of compressor units and total power consumption are compared. 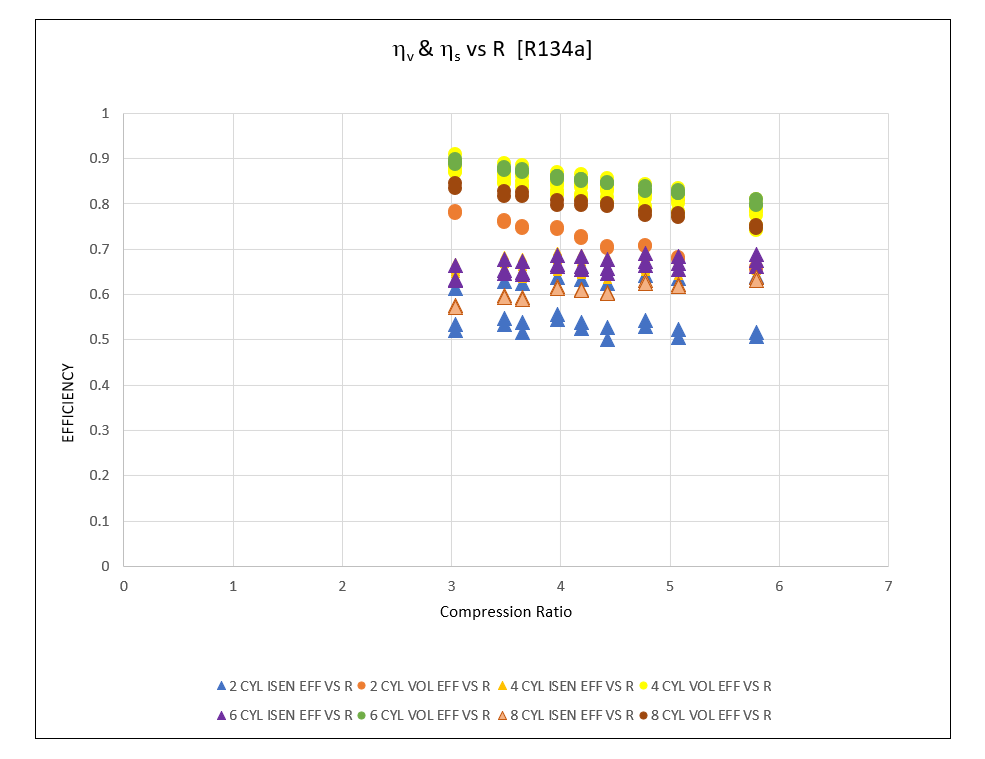 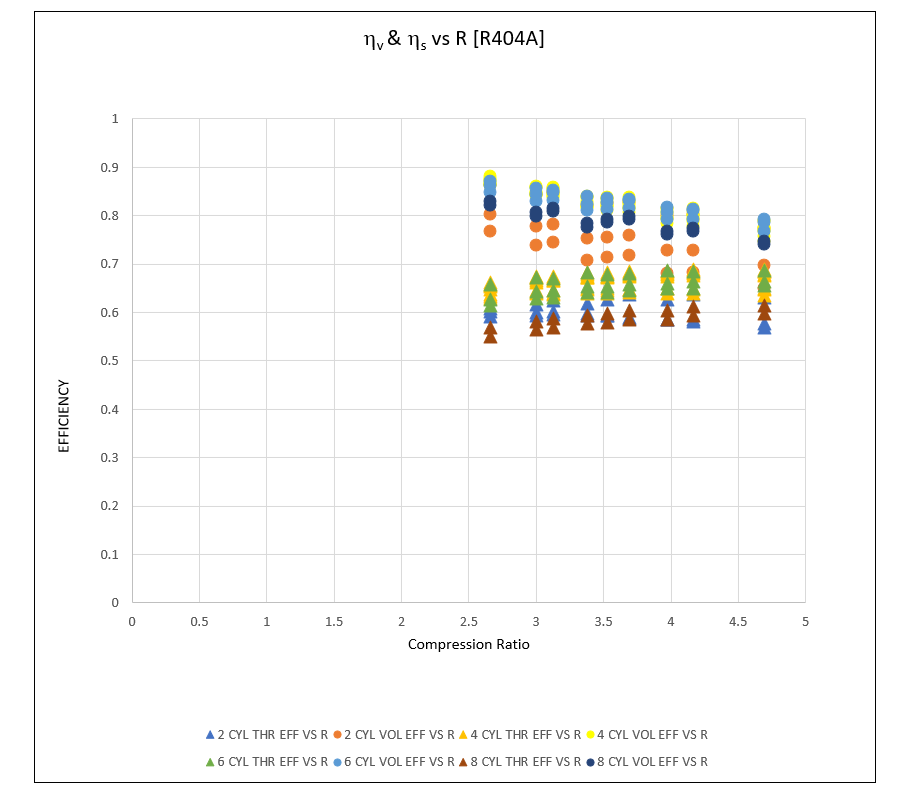 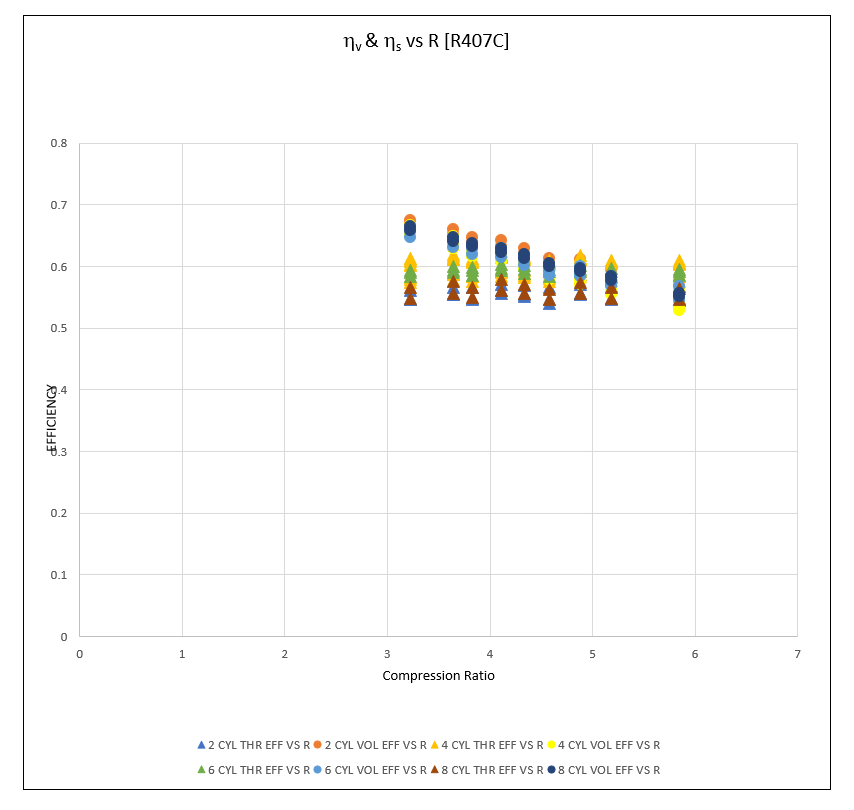 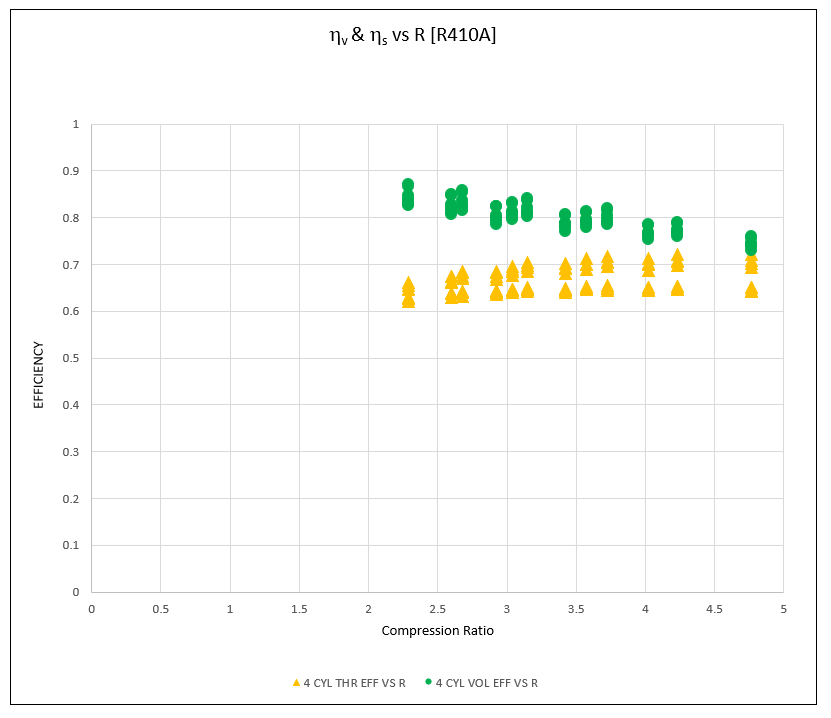 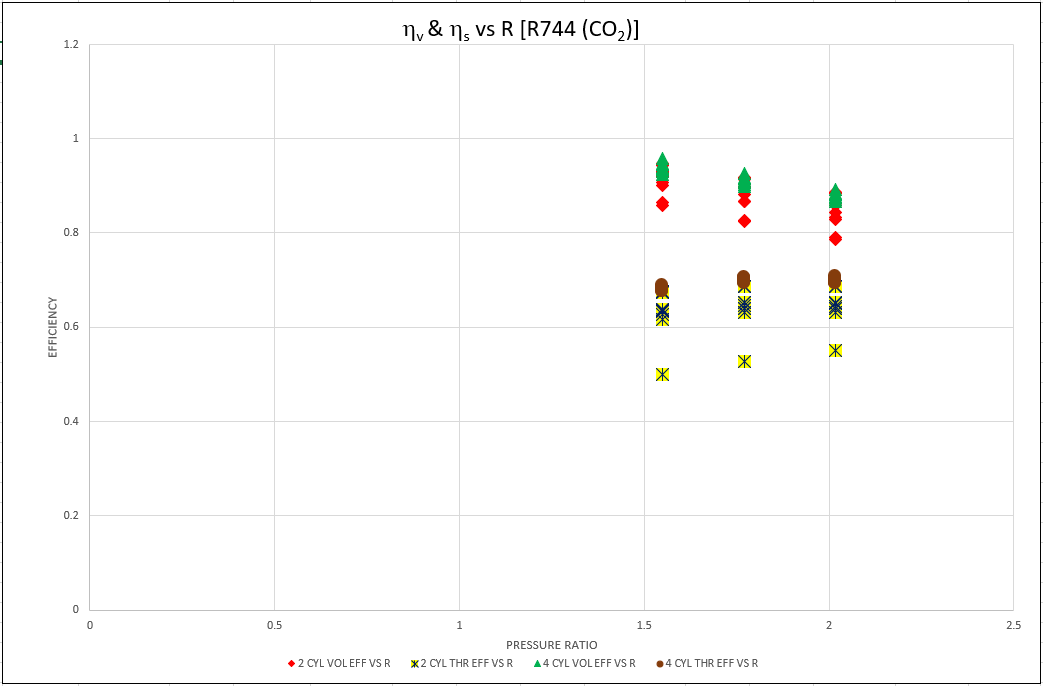 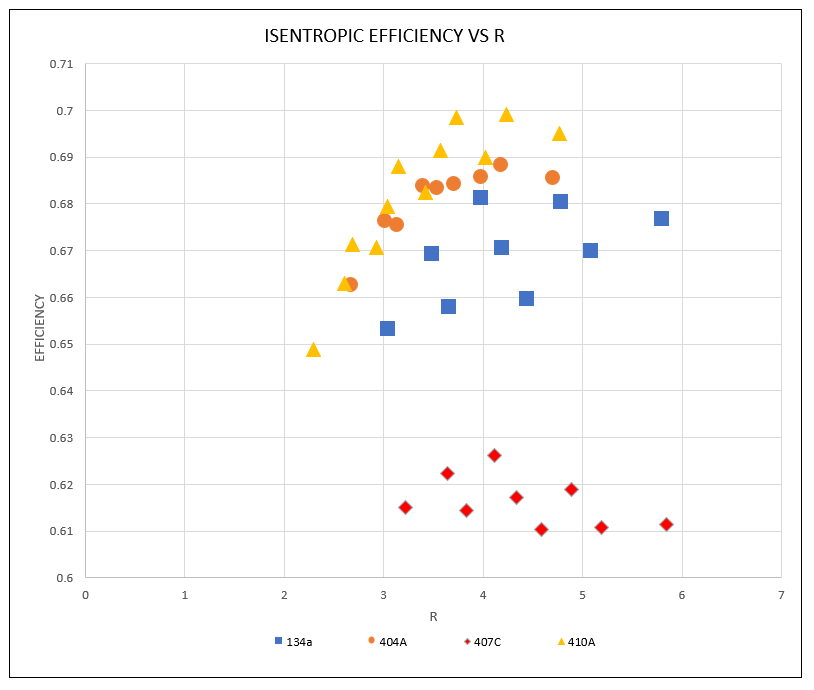 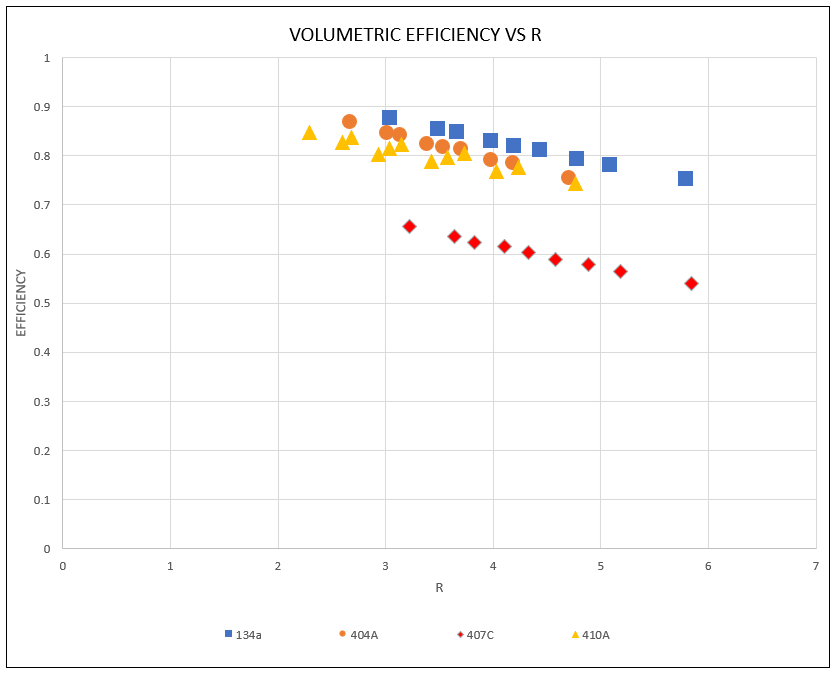 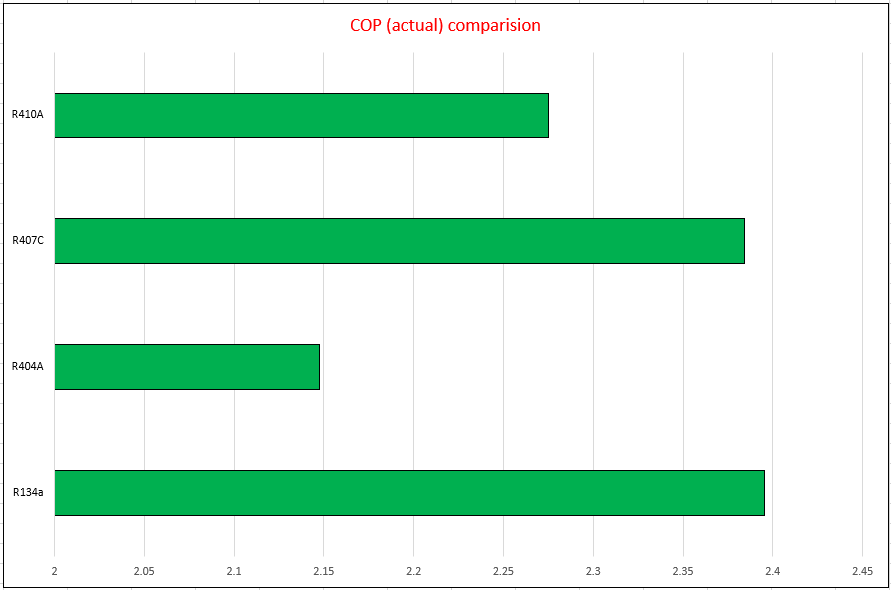 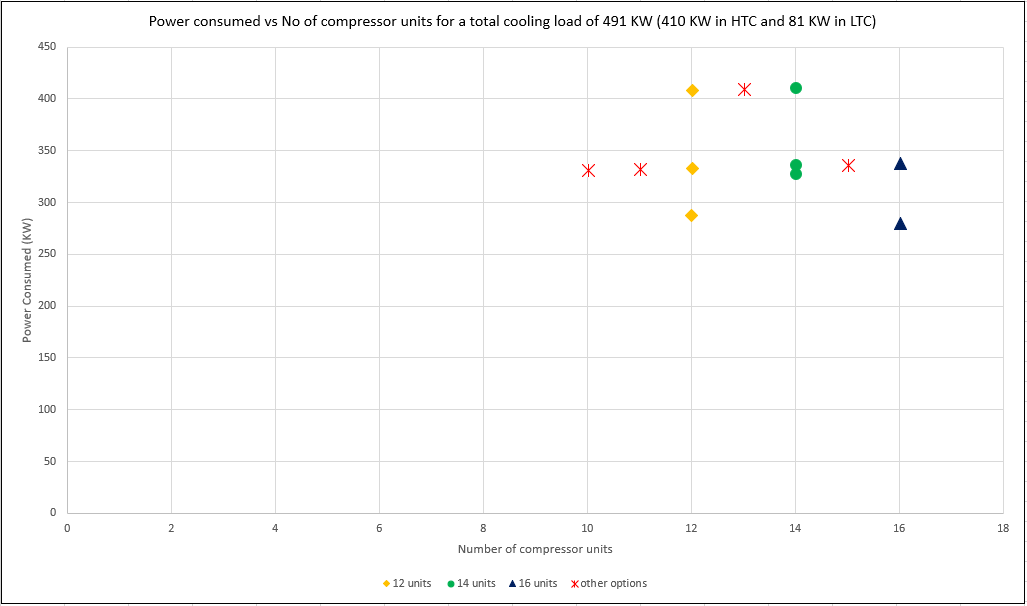 2. Amongst all cylinder variants, 4-cylinder compressors show a higher volumetric as well as isentropic efficiency for all refrigerants for a given compression ratio.

3. For the same compressor model or compressors with comparable displacement volume, R410A gives maximum isentropic efficiency for a given compression ratio followed by R404A, R134a and R407C as shown in ​​Fig 10​​.

4. For the same compressor model or compressors with comparable displacement volume R134a gives maximum volumetric efficiency for a given compression ratio followed by R404A, R410A and R407C as shown in ​​Fig 11​​.

5. For a fixed compressor model or compressors with comparable displacement volume and at a fixed operating condition of Tcond = 45 0C and Tevap = -10 0C. The COP for R134a is the maximum followed by R407C, R410A and R404A which has minimum COP among all compared refrigerants. COPs of R134a and R407C are almost equal as shown in ​​Fig 12​​.

7. Carbon Dioxide or Green House Gas (GHG) emissions both direct and indirect were calculated for each refrigerant operating at the stated operating conditions. As indirect emission is in direct relation with power consumption for unit cooling capacity thus, R404 with the least COP has the highest indirect carbon dioxide (GHG) emission. Also with GWP of 3922, R404A has the highest direct emission followed by R410A (GWP = 2088), R407C (GWP = 1774) and R134a (GWP = 1430)[4]. As GWP of CO2 is 1, its direct emission poses the least concern.

8. Both inter cascading and intra cascading of refrigerants other than CO2 is not viable. In case of intra cascading, these refrigerants do not provide a wider opearting range of evaporator and condensation temperatures (as shown in ​​Fig 14​​) and might require extra motor windings at such conditions. While in the case of inter cascading, there is a maintenance issue as all these refrigerants have similar kind of packaging. It becomes very confusing for the prevailing semi-skilled maintenace personnel and if by any chance there is a mixup the whole plant would be at risk of failure. In such cases CO2 has an advantage as it has a completely different packaging which is easily distinguished from others.

9. A cascade of subcritical CO2 in LTC and other considered refrigerants in HTC using compressors of comparable swept volume resulted in R134a in HTC taking up the least total power for a given combined cooling load whereas R410A in HTC required the maximum power. Thus R134a in HTC should be cascaded with CO2 in LTC in order to obtain an energy efficient system.

10. The cascade of subcritical CO2 in LTC and trans-critical CO2 in HTC and the conditions mentioned in point no 8 of the methodology, we obtain the following results-

11. The results obtained in point no 10 provide a selection model based on the least power consumption. This can be easily extended for a selection of compressors based on many other parameters already calculated in the spreadsheet such as volumetric and isentropic effiencies, COP, number of compressor units and also cooling loads can be varied. All these variations result in a matrix which may provide a basis for selection based on one's own requirements.

I would like to extend my heartiest gratitude to respected Prof. Pradip Dutta, Department of Mechanical Engineering, IISc. Bangalore and Prof K. Srinivasan, Department of Mechanical Engineering, IISc. Bangalore for their sizable subvention and visionary guidance at each and every step of the project. It was an extremely enlightening experience to work under truly devoted and ingenious scholars at one of the most reputed institutes of India.

Also, I would be hideous if I forget to express my gratitude to all the colleagues whom I interacted with, in these 8 weeks. The thought of approaching the end of this small beautiful journey is filling my heart with sorrow. I would have liked to gain more from all the aforementioned delightful personnel. It would be grateful of me to lend my hand in future for any further task in the project and even experiment on it.

I also thank Academies of Science for their support throughout the programme and for providing me with such a golden opportunity. It would have not been possible without this program.