The high temperature superconducting sample YBCO is prepared by the solid state reaction method. XRD analysis reveals that YBCO sample is formed in orthorhombic perovskite structure. Lattice parameters of prepared YBCO sample are determined to be a=3.82Å, b=3.88Å and c=11.68Å. From R-T measurement, critical temperature of the YBCO sample is found to be 76.6K followed by a tail at 73.8K. This analysis reveals the contribution of grain and grain boundary roles in YBCO. 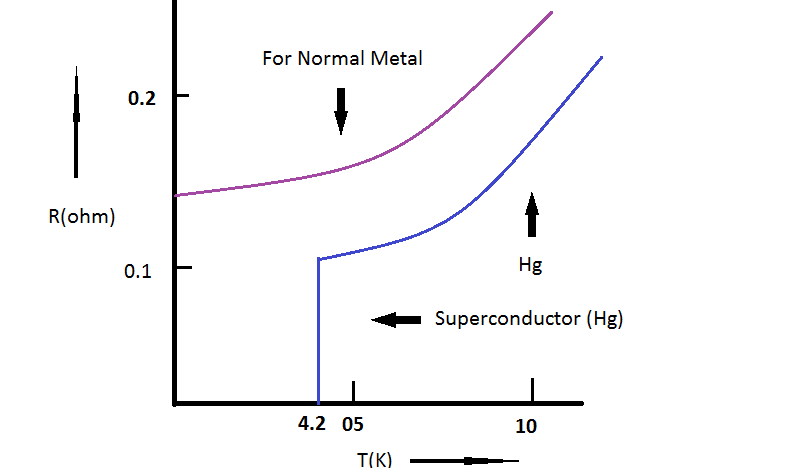 In 1933 Meissner and Oschenfeld observed the exclusion of magnetic flux inside the superconductor whenever it is cooled below Tc in an externally applied magnetic field i.e superconducting material behaves as a perfect diamagnet. This effect is popularly known as Meissner effect. 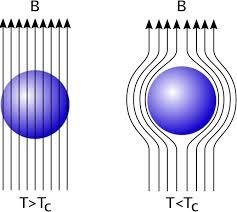 Depending on their behaviour towards external magnetic fields, superconductors can be classified into two categories.

Various theories have been put forth from time to time to explain superconductivity. These are:

Among the theories proposed, BCS theory is the most successful and explains almost all the properties of a superconductor except those exhibited by high Tc ceramic superconductors. Those superconductors which can be explained by BCS are known as conventional and those that cannot be explained by BCS areunconventional. According to BCS theory, the superconductivity of a material arises due to the cooperating behaviour of conducting electrons. Cooperative behaviour is observed whenever electrons occupy the same quantum state. In BCS, theory two elctrons can attract each other in a certain range of energy and form pairs. These electron pairs are known as Cooper pair, which is the main cause of superconductivity.

Applications of a Superconductor

High temperature superconductors are brittle ceramics which are very expensive to manufacture and not easily formed to any desired shape.

Statement Of The Problem

In 1986, it was found that some semiconducting oxides can become superconductors at a comparatively high temperature. After that, in 1987, YBCO was discovered by Maw-Kuen Wu and Chu-Ching Wu which has a transition temperature of around 93 K. This is the first discovered crystalline chemical compound which has a transition temperature higher than the boiling point of liquid nitrogen (77 K). The chemical formula of YBCO is Y1Ba2Cu3O7-δ (also called 123). The superconducting state of YBCO can vary from δ=0 to 0.5. Beyond 0.5, it changes into insulating state. YBCO is a type-II superconductor with a mixed state.

Like other high temperature superconductors, YBCO too has a layered orthorhombic distorted perovskite structure. The structure is a combination of copper-oxygen, barium-oxygen and yttrium layers. The copper-oxygen layers play a vital role in superconductivity. There are two types of Cu-O layers in the structure. One is CuO2 layers known as planes and another one is CuO layers known as chains. CuO2 planes and CuO chains possess five fold pyramidal and square planar coordination respectively. Between CuO2 planes and CuO chains, there is a layer of BaO & Y placed between the layers of CuO2 planes. 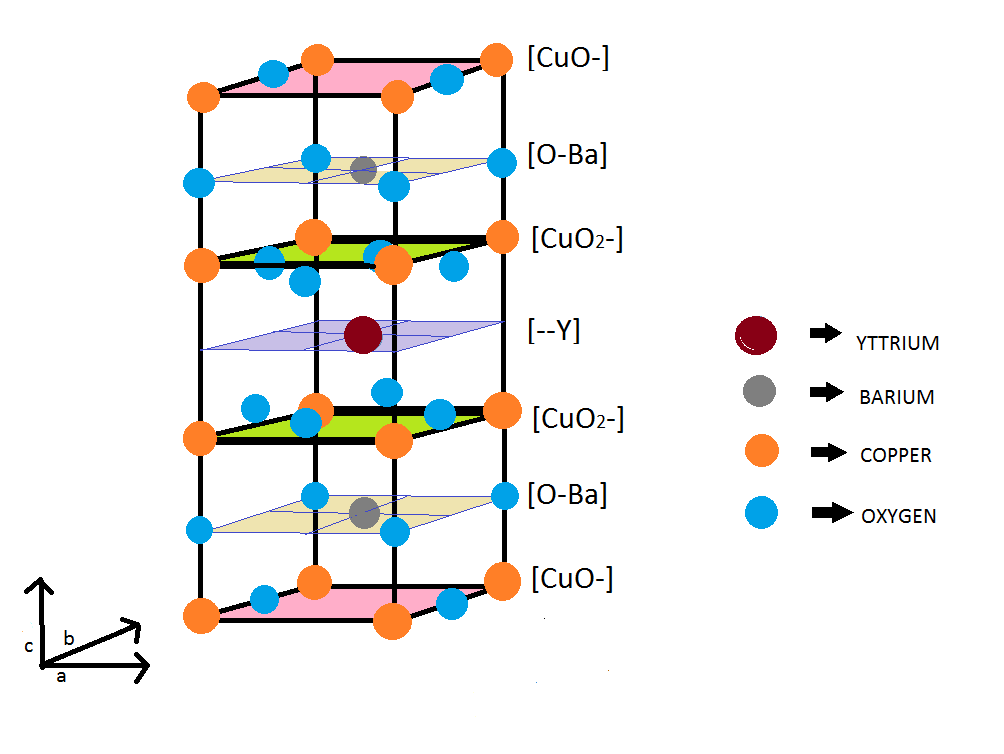 In YBCO, charge transfer occurs through holes in the Coopers pairs instead of electrons. The holes are generated whenever there is conversion of Cu(+2) ions to Cu(+3) ions .

A YBCO sample is prepared by the Solid state reaction method. For synthesis of ceramic materials, this method is commonly applied. In this method, a particle's size is reduced to the nano order.

For the preparation of YBCO sample, the following steps are adopted-

The above-mentioned steps are described below-

The chemical equation involved in the synthesis of YBCO is-

The stoichiometry amount of precursors was taken by weighing with an electronic digital balance with an accuracy of 0.00001gm as follows.

The precursors were mixed properly by grinding them thoroughly with the help of a mortar and pestle for about one and a half hours till the mixture becomes homogenous and grey in colour. To increase homogeneity, the mixed precursors were calcined twice at 920°C for 24 hours followed by grinding. By following the above procedure, deep grey coloured YBCO powder was formed. The powder sample was again ground for about 2hours. After that, pellets were prepared by using hydraulic press pelletizer at a pressure of 75KN/(1.5cm)2. To increase the hardness of the sample, the prepared pellets were sintered at 920°C for 24 hours. The sintered pellets were black in colour. To enhance the phase purity and to achieve long range ordering in the sample, annealing of the pellets were done in a tube furnace at 900°C for 24 hours and further at 600°C for next 24 hours with a flow of oxygen at a rate of 1 bubble per second (approx.). After that, the sample was left for cooling with the oxygen flow. The cooled pellets were black in colour.

X-ray diffraction is a scattering-nondestructive analytical technique which reveals the information about crystallographic structures, chemical composition and physical properties of materials. XRD is based on constructive interference of monochromatic light. The incident beams of X-Rays strike on the surface of sample and then diffract. It follows Bragg's law of diffraction. 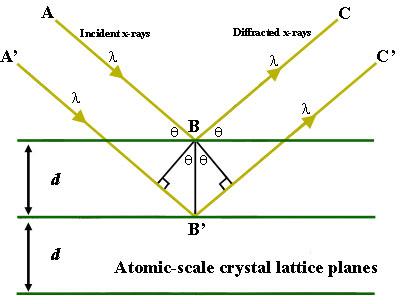 It can be mathematically represented as

Resistance can be measured by several methods. The four probe method (by Quantum design PPMS ) is one of them. In this method, two leads are used to pass the current & another two leads are used to measure potential difference. Another method is the two probe method, where the result may not be that much accurate due to contact resistance (the resistance between the electric wires and the sample). So, to get accurate measurement of resistance, the four probe technique is good as it eliminates both the contact resistance and leads resistance. 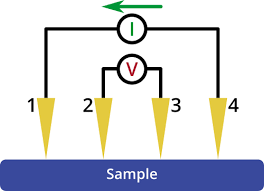 To measure resistace by the four probe method, the silver or indium contacts were made on the polished surface of the sample. The sample is in the form of a rectangular rod which is placed in puck. Using GE varnish the sample is glued to the surface of the puck. Between the sample and puck surface, we placed a cigarette paper so the sample can't be short circuited. 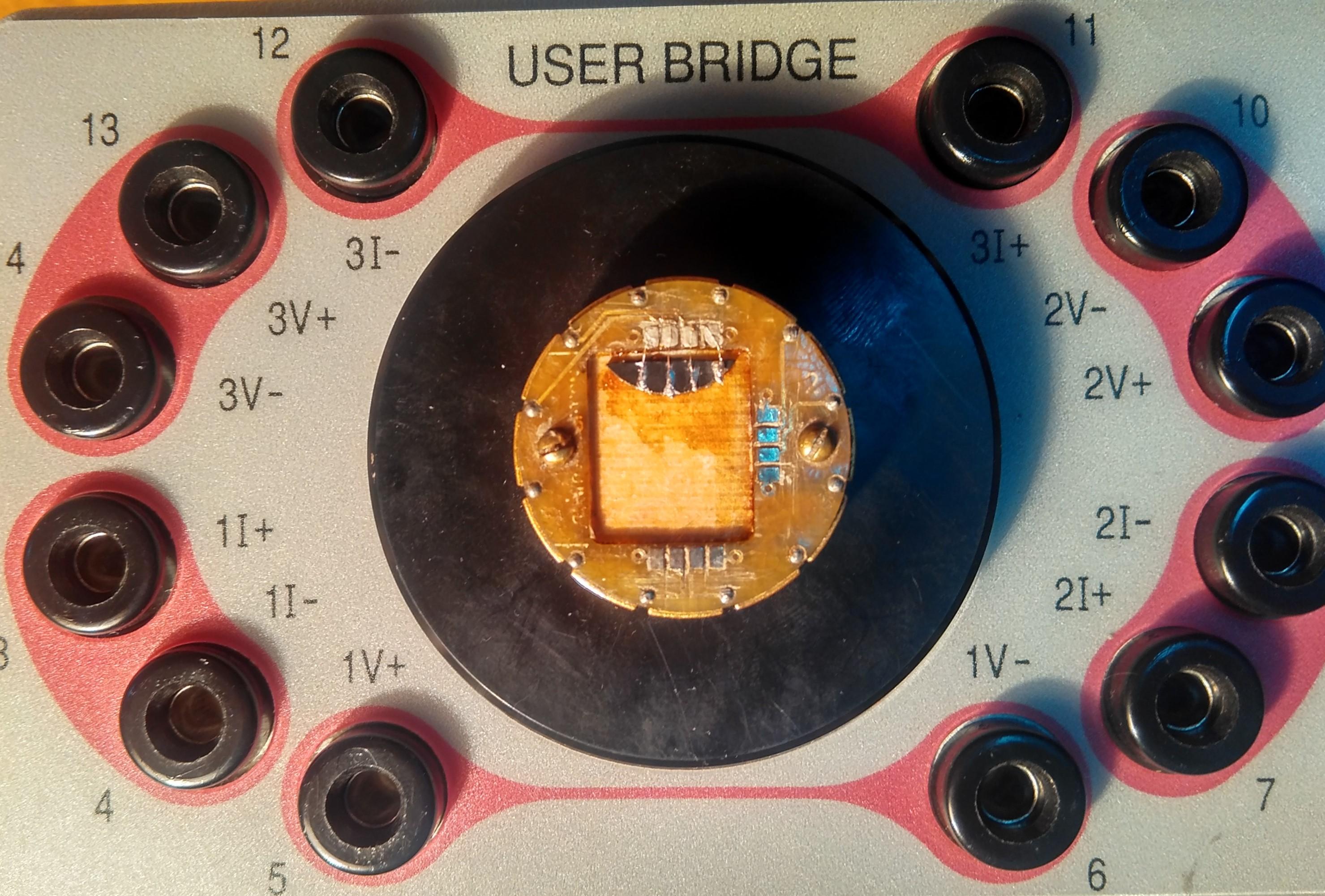 Powder phase XRD analysis of the prepared YBCO sample was done with a scanning range from 10°-90°. The XRD pattern of the sample is depicted in Fig.8 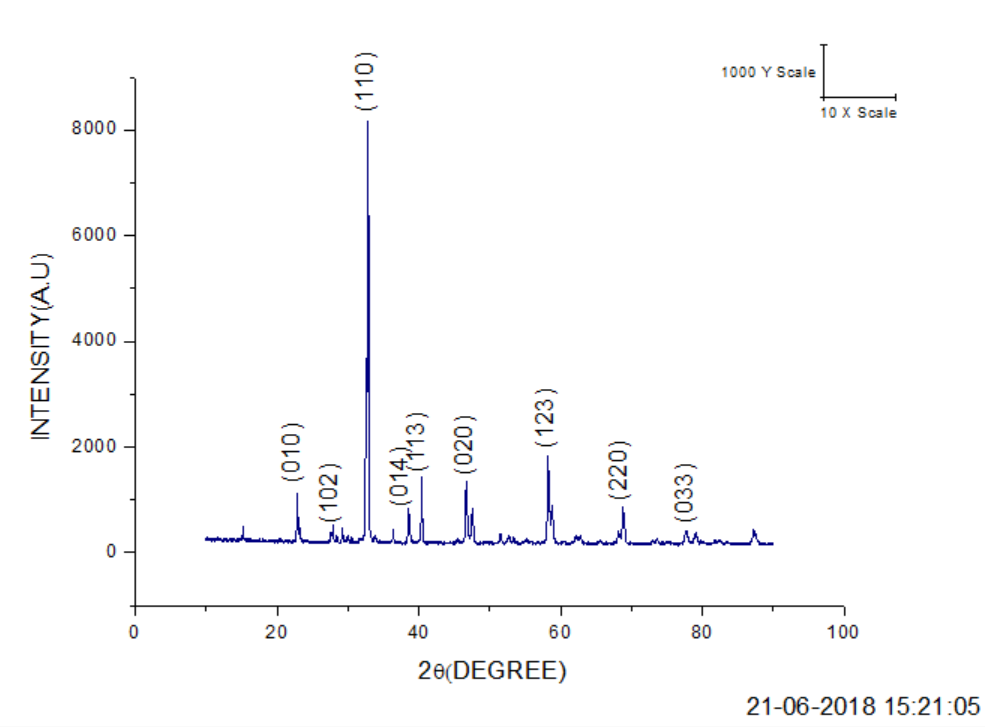 From the above XRD analysis, YBCO sample is found to exhibit orthorhombic perovskite structure and the lattice parameters of the sample are determined to be a=3.82Å, b=3.88Å, c=11.68Å.

Resistivity And Temperature Analysis Of YBCO 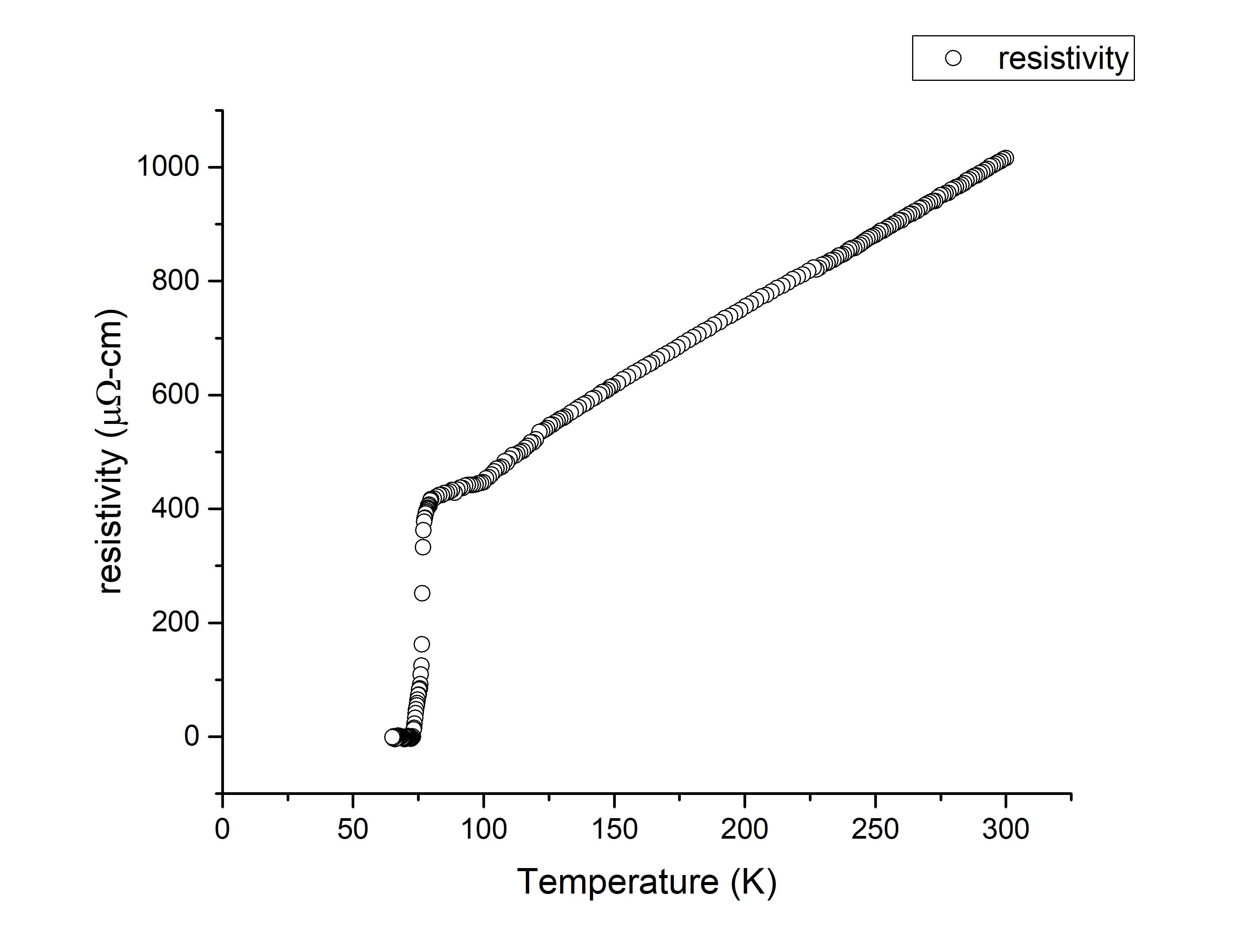 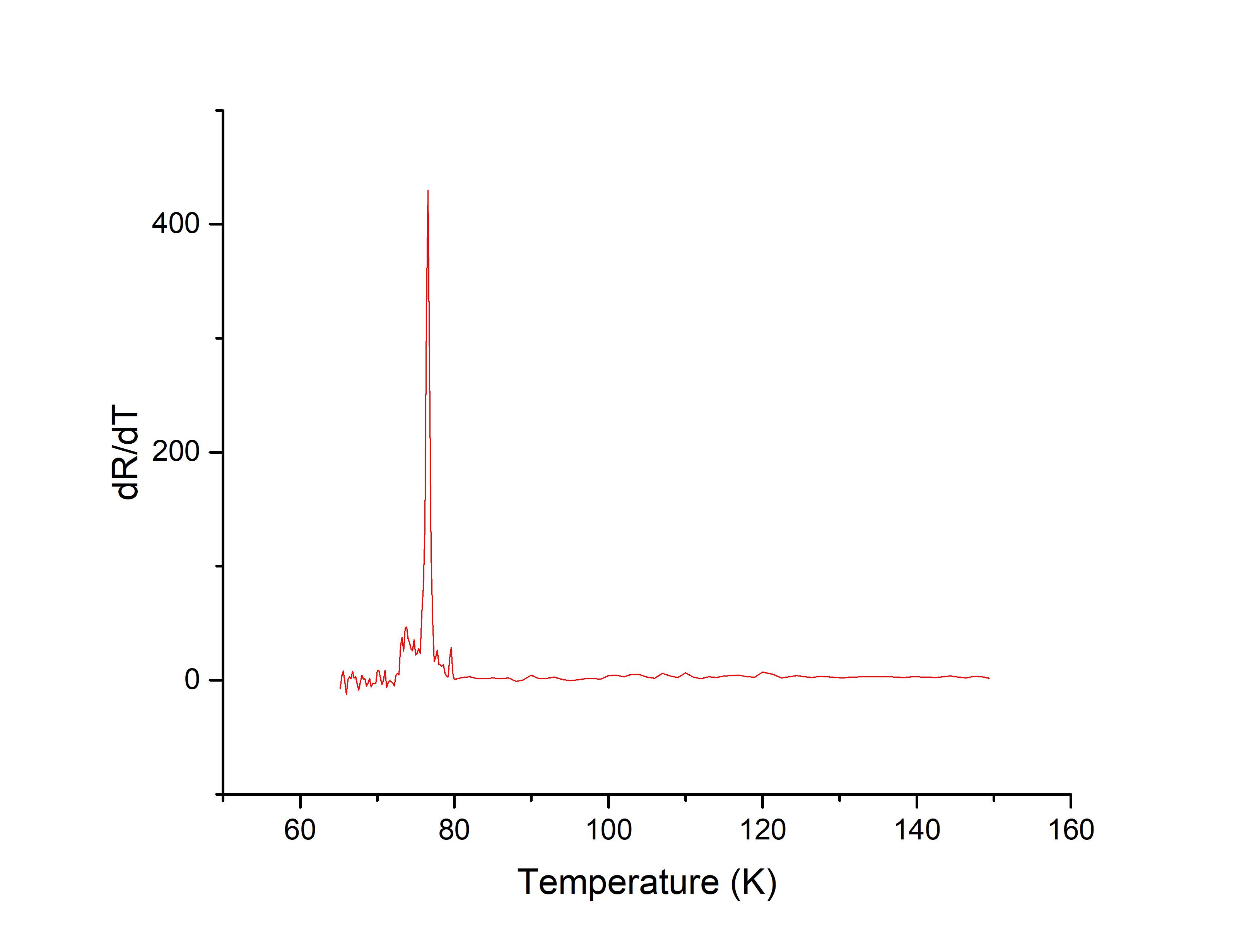 The resistivity of the YBCO sample is carried out by the standard DC four probe technique. From the measurement, we can see that the transition is not sharp, rather it decays gradually. This is because of the deficiency of oxygen in the sample. The transition is very broad, it starts around 82K, so, for the confirmation of the exact Tc of the sample, we plot dR/dT too and from that curve we can clearly see a sharp peak followed by the broad peak. The sharp peak is at 76.6K and it may be due to grains formed in the sample and the broad one is at 73.8K and it may be due to grain boundaries in it. Both grain and grain boundary are superconducting in nature below 73K.

We have prepared YBCO sample 3 times. The first 2 batches were not superconducting but the 3rd one was. The transition is not sharp as expected, may be due to the deficiency of oxygen in the sample. But from the broad transition, we can study the effect of grain and grain boundaries in a superconductor. The lattice parameters are in good agreement with the previous reported value. I had also visited other labs of UGC-DAE, CSR, like MOSSBAUER, MAG LAB, IN-SITU, RAMAN, PLD and so on. From there too I have learnt so many things, which can help me in my near future. Also, it inspires me a lot so that I can choose research as a career.

I owe my heartiest gratitute to Dr. V. Ganesan, Centre Director, UGC-DAE CSR, Indore for his advice and masterly guidance in my project work.

I would like to acknowledge the Administrative staff and members of UGC-DAE, CSR, Indore, for providing me accommodation and using their facilities.

It is my privilage to express my profound regards & deep sense of gratitude to Mr. Vinay Kaushik for his support during my summer reserch project work. Without his support I would not able to complete my work.

I feel deeply indebted to all the lab members and technical staff for their helping hand during my project work.

I sincerely record my thanks to all the faculties of IGIT, Sarang for their guidance & valuable suggestion.

I extend my gratitute to all the collaborators and the AuthorCafe team. It's a great experience to write my project report on AuthorCafe portal.

I also feel very proud of my beloved parents, who have always been a source of inspiration for me, for their continuous support throughout my life and my uncle for local support.

Last but not the least, I would like to express my devotion to the almighty GOD for giving me strength and energy.