The Polycystic Kidney Disorder (PKD) is a hereditary disorder associated with the formation of multiple cysts in kidneys. Autosomal dominant polycystic kidney disorders (ADPKD) are caused due to mutation in genes PKD1 and PKD2. Mutation in PKD1 is the most prevalent of the three, affecting 1 in every 600 to 1000 live births with ADPKD. Nearly 200 different mutations are observed in PKD1 gene and most of them lead to abnormal polycystin1 protein. ADPKD is a middle age onset disorder with formation of multiple cysts in the kidneys. The formation of cyst leads to failure in normal functioning of kidney and other associated complications. The most serious complication is end stage renal disorder. The extra-renal complications involve Cysts in liver, pancreas and other organs, hypertension, cerebral aneurysms, and mitral valve prolapse. The PKD1 is a nearly 54-kb long gene with a transcript size of 14.5-kb encoding Polycystin1. The PKD1 transcript contains 46 Exons. The Exon15 encodes for PKD1 Domains. The PKD Domains are necessary for the normal functioning of PC1 and mutations in PKD domains are associated with the pathogenesis related to ADPKD. The aim of the study was to identify the most prevalent gene sequence variation in Exon 15 of the PKD1 gene in Indian population. The analysis revealed two prominent mutations in the Exon15. The first mutation observed is a transition from C to T at 4754 position of the mRNA. The second mutation was a single nucleotide deletion at 5223 position of the mRNA.

The pathophysiological conditions associated with ADPKD are formation of cyst in kidney and in other organs such as liver and kidney, intra cranial aneurysms and dolichoectasias, dilation of the aortic root, dissection of the thoracic aorta, mitral valve prolapse and abdominal wall hernias ​[2]​. Renal cyst diseases and congenital hepatic fibrosis is observed in case of ARPKD [2]. The renal cysts are found as a monolayer of cells in the epithelia of nephron and renal collecting ducts. The cysts are poorly differentiated and have higher cellular proliferation [1]. In ARPKD the cysts are generally seen in collecting ducts but in case of ADPKD, cysts are found both in the nephron and collecting duct.

ADPKD is more prevalent and affects 1 in every 500 to 1000 live births whereas ARPKD accounts for 1 in 6,000 to 40,000 live births [2]. Nearly 50% of the Patients with ADPKD develop ESRD, accounting for 4% to 10% of overall ESRD cases [3]. Mutation in PKD1 accounts for 85% of the cases whereas PKD2 accounts for only 15% of the cases [4]. The mutations in PKD1 gene generally lead to translation of truncated or non-functional protein. More than 200 mutations have been identified which are mostly nonsense mutations, missense mutations, insertions or deletions. 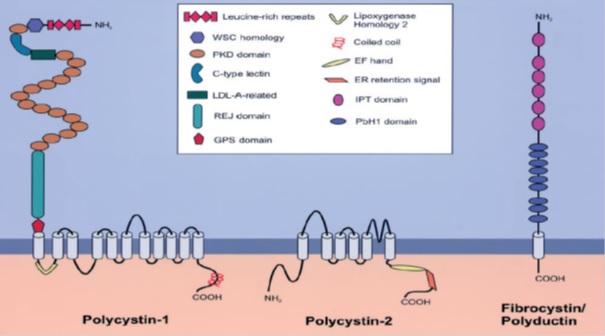 There are many theories that address the pathogenesis associated with ADPKD. ADPKD is a focal disease in which the cysts arise only from a few nephrons, even though all the nephrons have the same inherited mutation. The Two Hit Model explains the complete loss of PKD1 gene as the main reason behind the focal nature of cyst in ADPKD. The complete loss of PKD1 gene is due to mutation in both the alleles of PKD1 gene, involving one, inherited mutation, and two somatic mutation, the latter acquired during one's lifetime. The other theories that explain the associated pathogenesis are haplo insufficiency and dominant negative mutations ​[2]​ ​[4]​. Various other in vitro studies and studies in mouse models show that the mutations in PKD1 that lead to abnormal PC1 is the major cause of the pathogenesis associated with PKD1.

The PKD1 gene is nearly 52 kb long and has 46 Exons. The mRNA transcript is nearly 14 kb long with 12.9 kb long open reading frame ​​[3]​​[5]​​. There are at least three homologous genes of PKD1 with more than 95% similarity located on chromosome 16p 13.1 duplicated during the course of evolution ​[2]​. Only the first 33 Exons are duplicated in homologues, and only a 3.5 kb region from Exon 34 to 46 is unique to PKD1. The absence of optimal start codon or the presence of premature stop codon leads to the conclusion that PKD1 homologues are pseudo-genes and encode non-functional polypeptides ​[4]​​[5]​. The intron 21 has the longest poly-pyrimidine tract of 2.5 kb length, which may have mutations due to formation of triple helix structure ​[4]​.

The Polycystin1 encoded by PKD1 is a 4303-amino-acid-long integral membrane protein with a molecular mass of nearly 460 kDa. The amino terminal extracellular region is nearly 2500 amino acid long and contains leucine rich repeats, a C type lectin domain, a LDL-A-like domain, 16 Ig like PKD domain and a region with high similarity to sea urchin sperm egg jelly like receptor (suREJ) [4]​. There are 11 trans-membrane domains and nearly 200 amino acid long carboxyl terminal cytoplasmic regions with coiled coil domain ​[3]​​ [4]​. The structural analysis of PC1 domains indicated that they are involved in cell-cell interaction or cell-matrix interaction [4]. The extracellular region is involved in cellular adhesion , whereas the C terminal tail interacts with polycystin2, G proteins, and other proteins associated with cytoskeleton ​[3]​. It is also observed that the C terminal end modulates the Wnt signalling pathway ​[6]​. PC1 plays a major role in cellular proliferation, differentiation and maturation​ [6]​. The in vitro studies in MDCK cell-lines show that PC1 is necessary for normal tubular development. The PC1 protein is expressed in epithelial cells and vascular smooth muscles of kidney, brain, heart, bones, and muscles; and is localized on the plasma membrane of the cells.

There are 16 Ig like domains commonly called as PKD Domains. The PKD domains include nearly 80 amino acids. The first domain is encoded by Exon 5 and the rest of the15 domains are encoded by Exons 11-15. In PC1 the first Ig like domain is found between Lecine Rich Repeats and C type lectin domain while the other 15 copies are present in a tandem between LDL domain and REJ receptor. The PKD Domains form beta sandwich folds, which is a characteristic feature of proteins belonging to the Ig superfamily and are necessary for ligand binding interactions. Even though the PKD domains have Ig like repeats they do not belong to the Ig superfamily. In vitro studies show that PKD domains have a strong homophilic interaction. The study also proves that PKD domains are involved in cellular adhesion. Further, the destruction of PKD domains in MDCK cells using specific antibodies led to the disruption of cell to cell interaction, suggesting that loss of PKD domains leads to cystogenesis. Overall it suggests that the PKD Domains are necessary for the normal functioning of PC1 and mutations in PKD domains are associated with the pathogenesis related to ADPKD ​[7]​ ​[8]​.

2.1 To isolate Genomic DNA from the blood samples of PKD patients

2.3 To purify the PCR product by ExoSAP

2.4 To sequence the PCR Product

2.5 To analyse the Gene Sequence variation in Exon15 of PKD1 in patient samples

Genomic DNA was isolated from the blood samples of patients with Polycystic Kidney Disorders by non-enzymatic method.

1)     Whole blood was collected in a syringe containing heparin (anticoagulant).

3)     Samples were centrifuged at 5000 rpm for 5 mins and the supernatant was discarded.

4)     3 volumes of Solution A was added to the cell pellet and mixed properly.

5)     The suspension was centrifuged at 5000 rpm for 5 mins and the supernatant was discarded.

6)     The cell pellet was dissolved in 2 ml of Solution B by vigorous mixing.

9)     Two distinct layers were observed; the transparent aqueous layer was transferred into a fresh sterile centrifuge tube and chilled absolute ethanol was added up to 5ml into it to get the DNA precipitated.

10) The precipitated DNA was then washed with 70% of alcohol twice.

12) After drying, 150µl of 1X TE buffer was added to the precipitated DNA and was kept at 37⁰ C for dissolution.

13) After complete dissolution, the DNA was stored at 4⁰C. 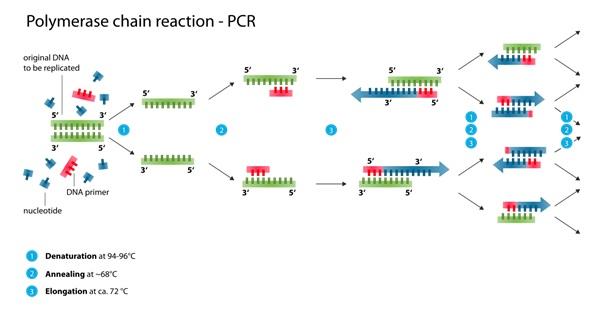 PCR was performed to amplify the Exon 15 of PKD1 gene. The Exon 15 was amplified into 13 smaller fragments using specific primer set.

25μl PCR reaction mixture with specific primers and was prepared to amplify each fragment of Exon 15 of PKD1 gene.

The PCR products were stored at 4⁰ C.

The PCR product was run on 2% Agarose Gel for confirmation. 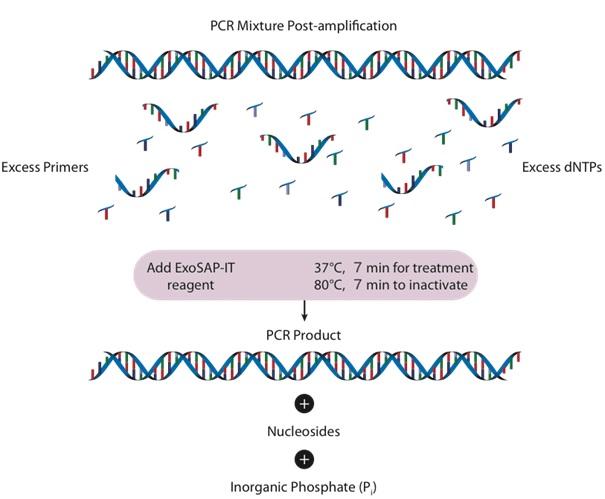 The PCR products were cleaned up during ExoSAP before sending it for sequencing. 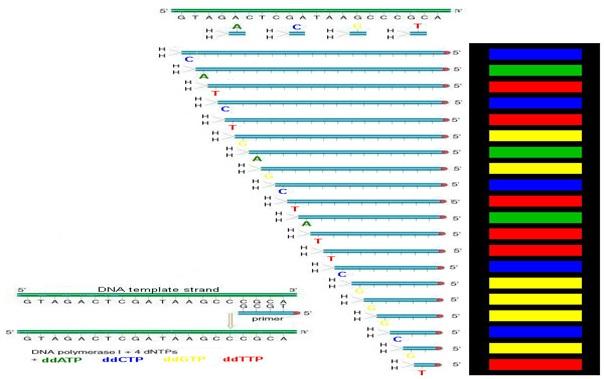 The Exon 15 of PKD1 gene was sequenced through Automated Sanger Sequencing Method.

The sequence chromatogram was analysed using FinchTV and the gene sequence variation in the sample sequence was found by comparing with sequence data of NC 000016.10 and NM 001009944.2 through MegaBLAST. 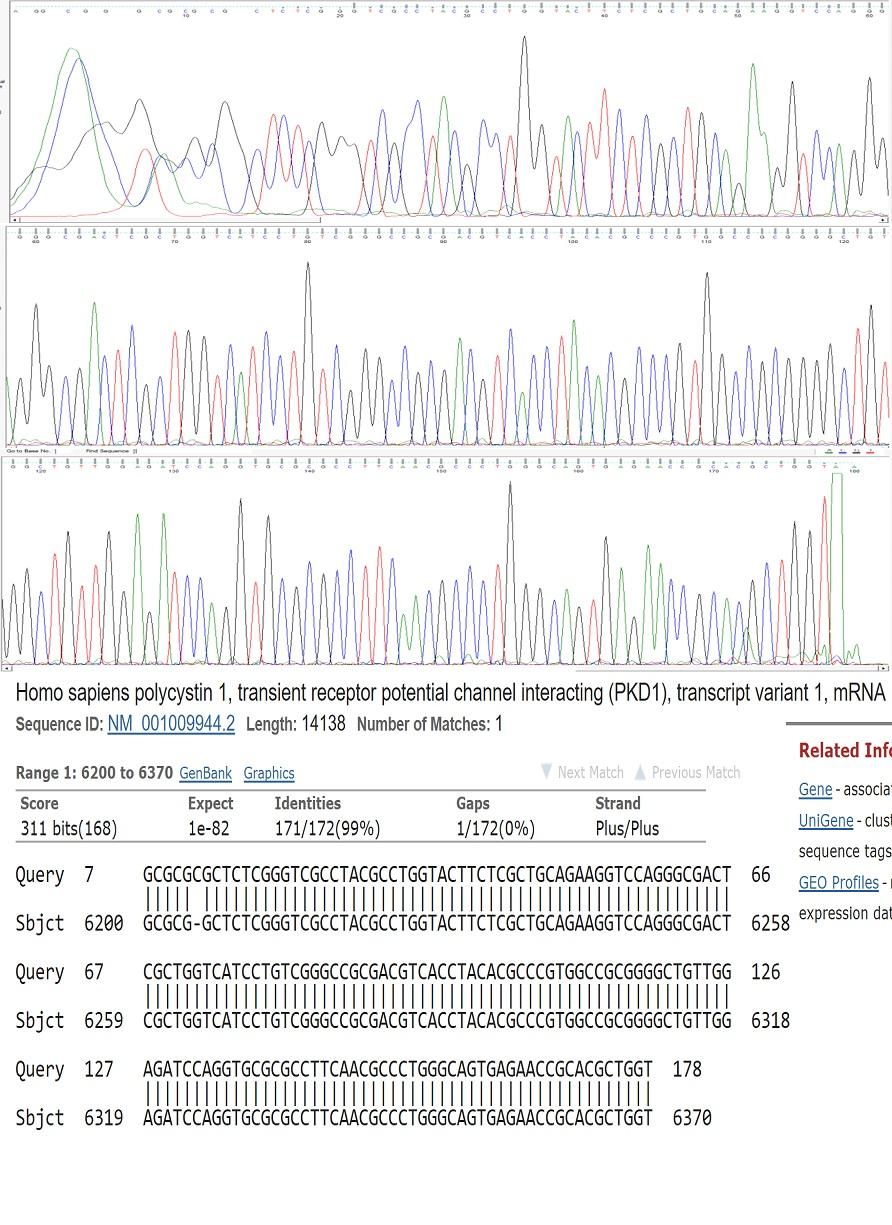 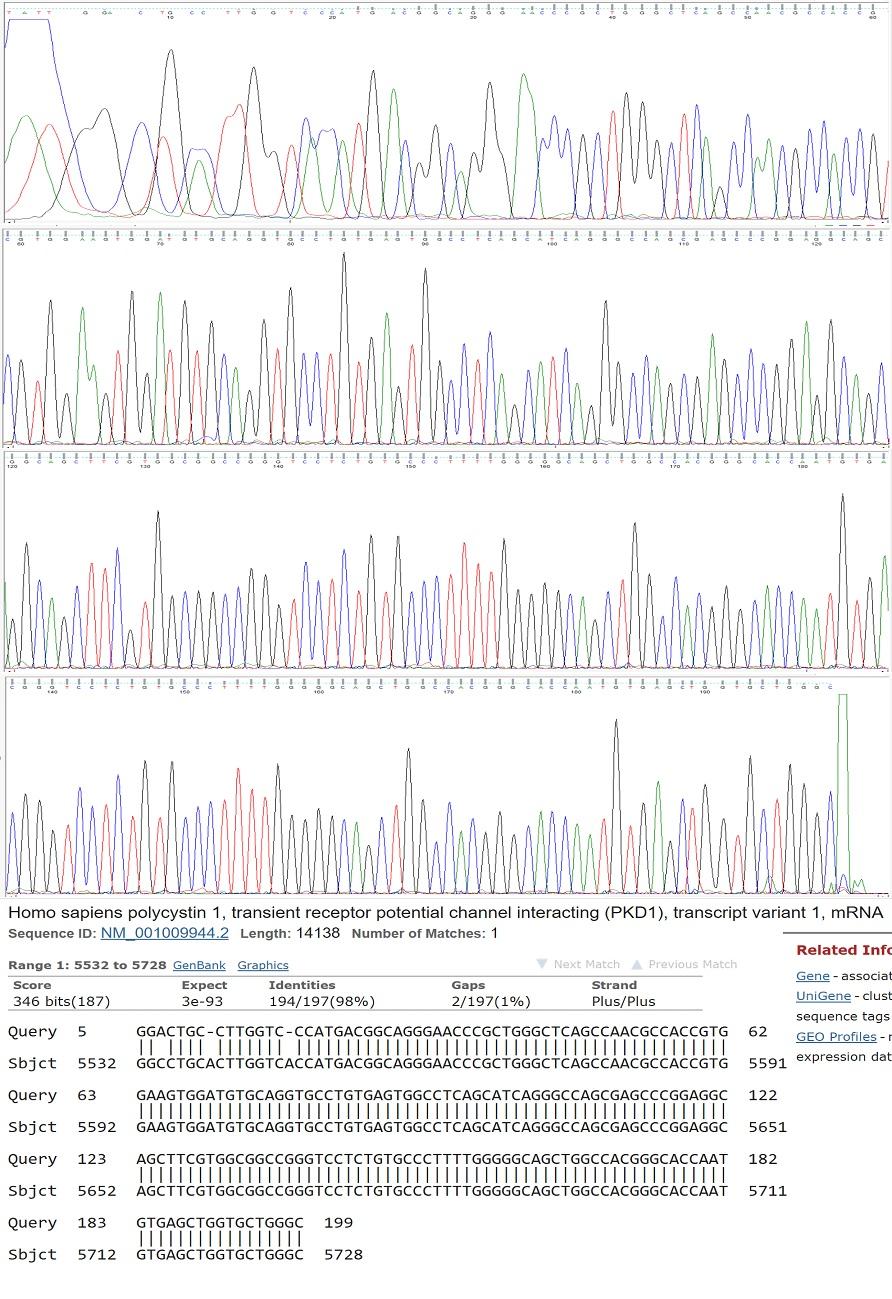 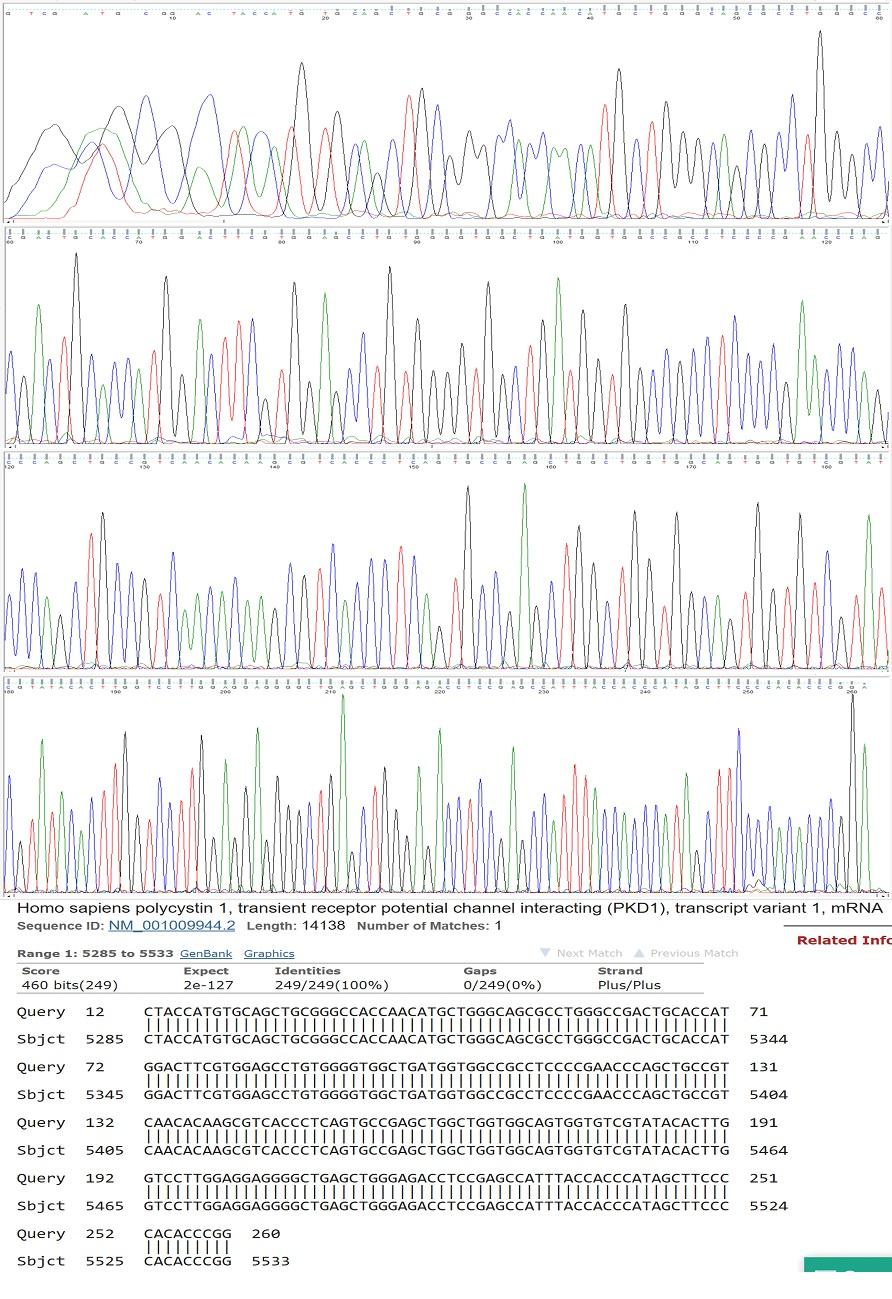 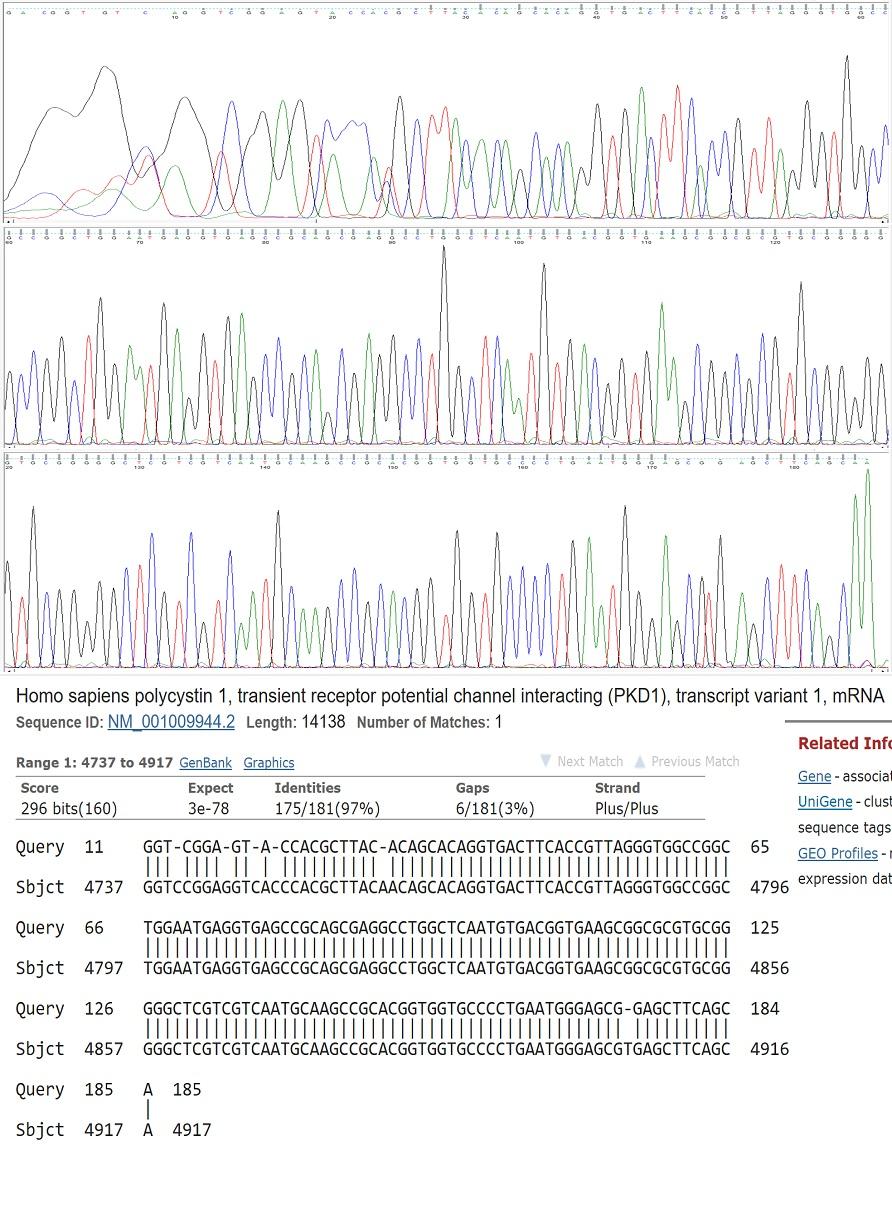 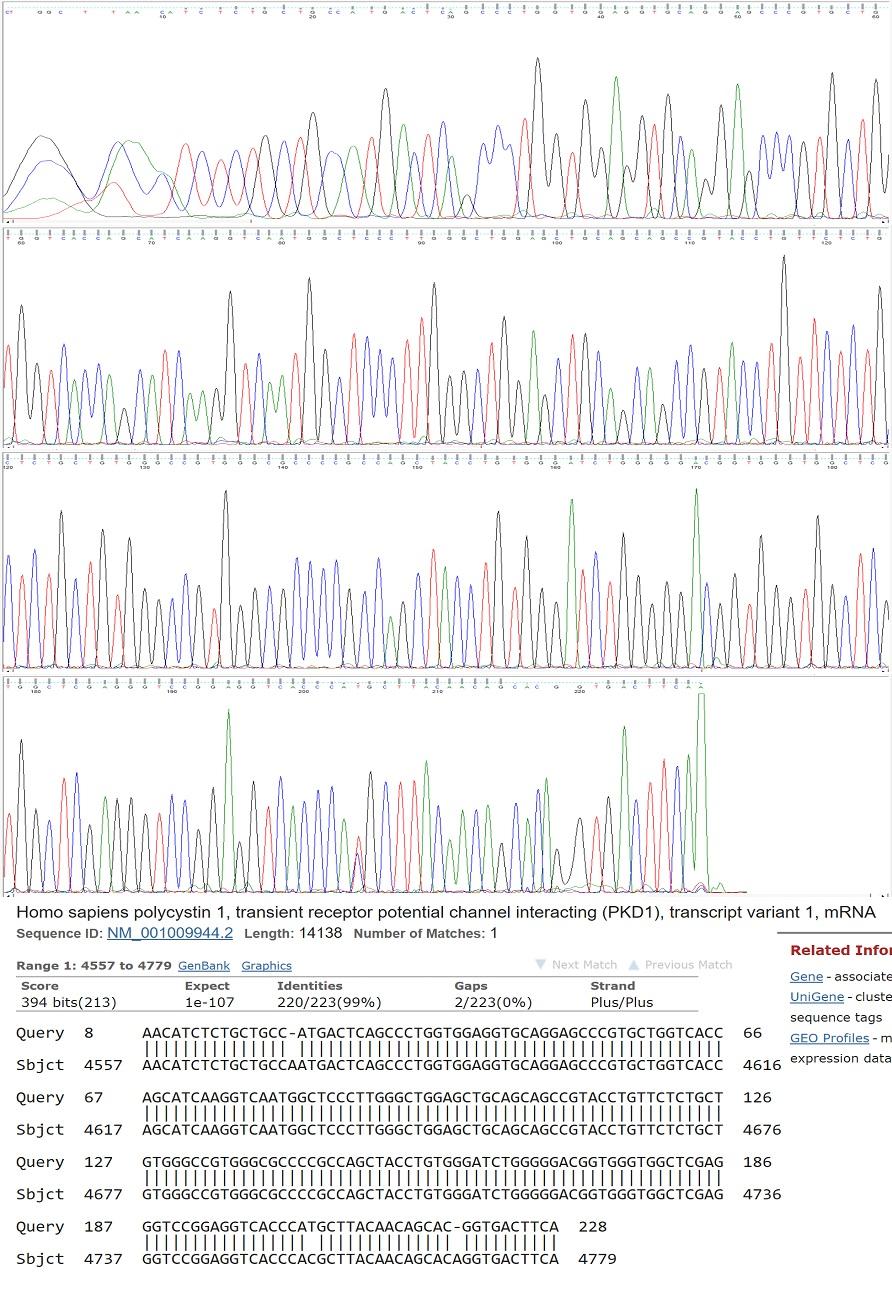 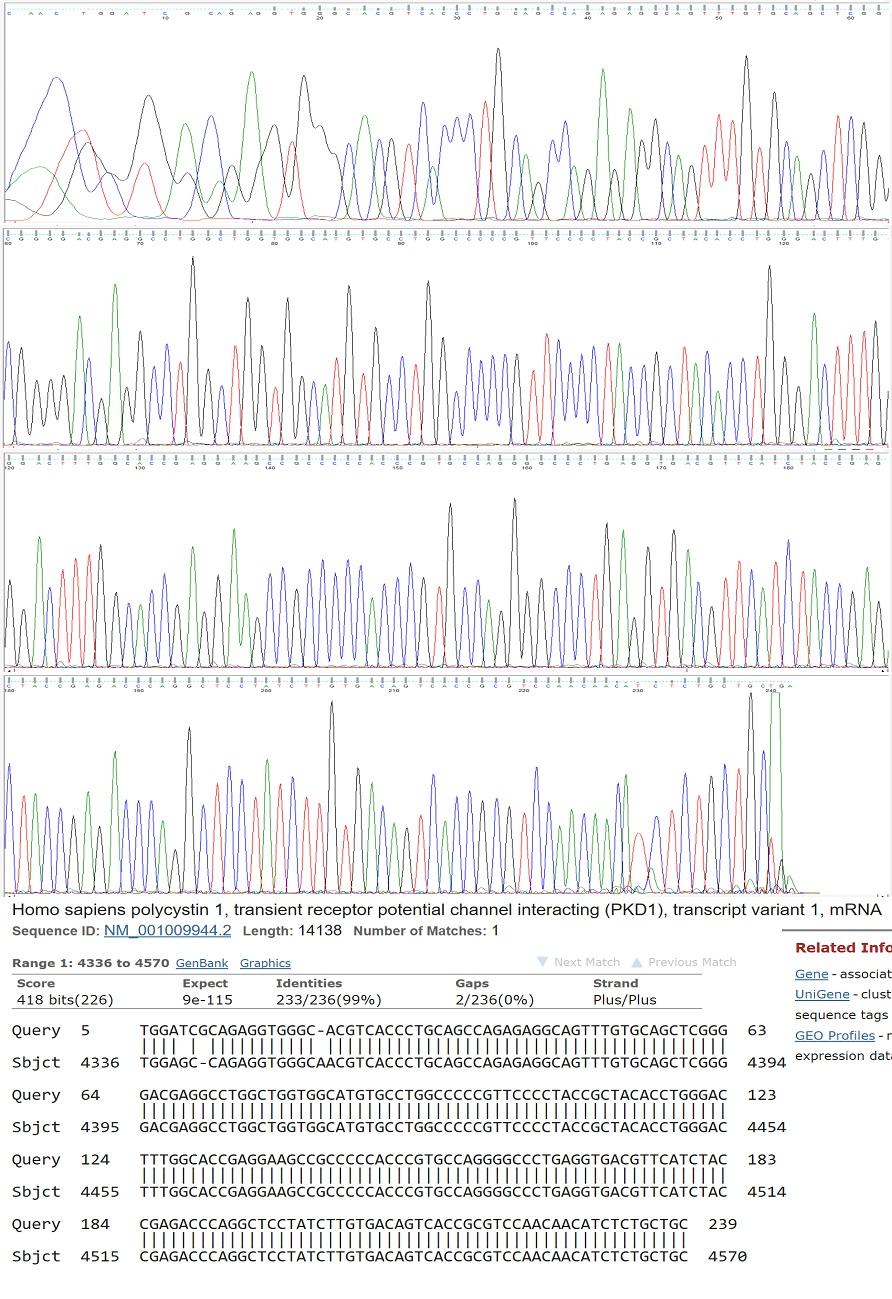 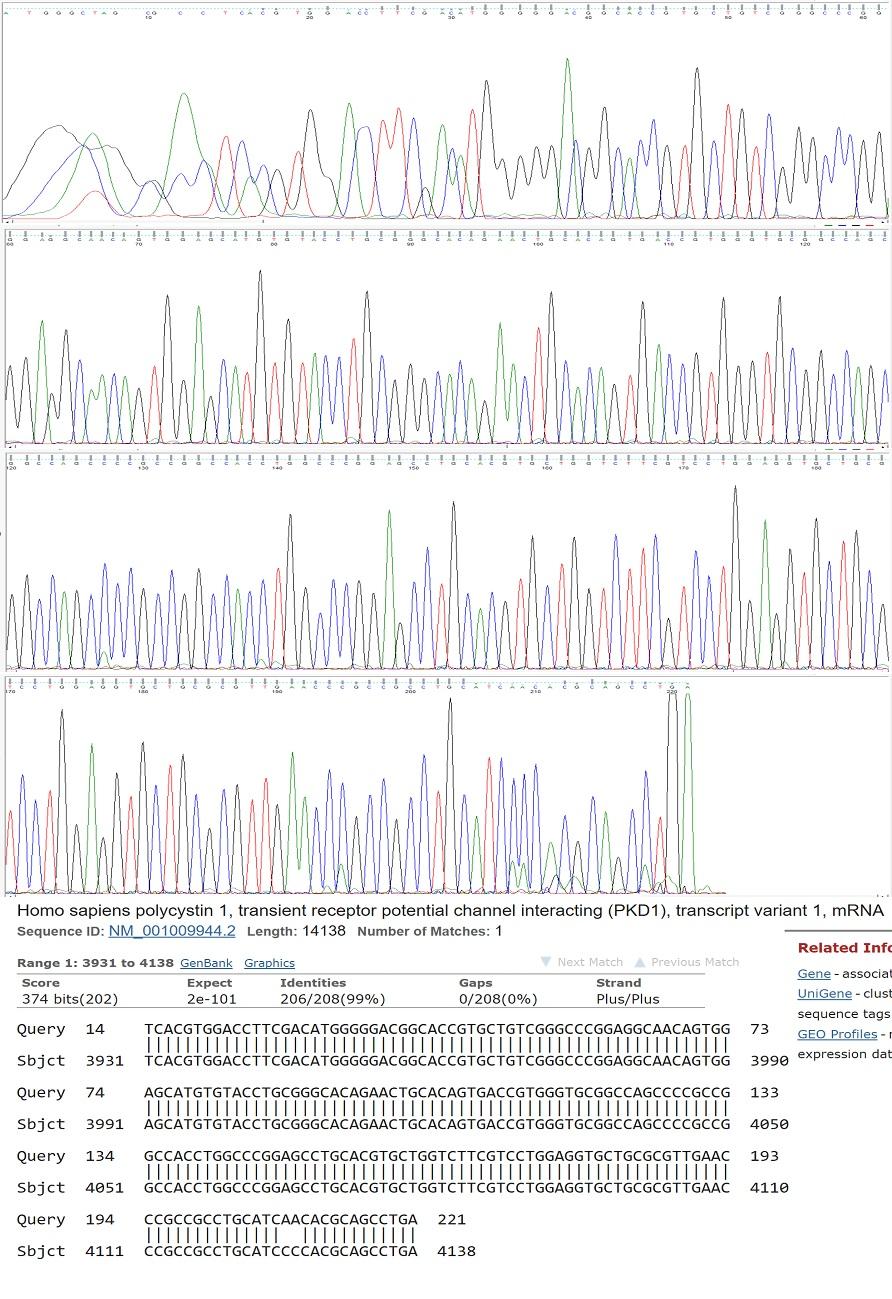 The PCR products showed a prominent single band when run on 2% Agarose Gel, the size of the band was confirmed by comparing with the size of the sample 86.1of respective sizes, which was used as the positive control for the PCR reaction. The analysis of chromatogram showed the presence of two DNA sequence variants in the Exon15 of the PKD gene. The first mutation observed was a transition from C to T at 4754 position of mRNA. The second mutation was a single nucleotide deletion at 5223 position of mRNA

The analysis of sequence data of Exon 15 of PKD1 Gene showed two prominent mutations. The first mutation observed is a transition from C to T at 4754 position of mRNA. The second mutation was a single nucleotide deletion at 5223 position of mRNA. Both the mutations were found in the PKD1 gene that codes for Polycystin1 Protein. Polycystin1 is an integral membrane protein and regulates the cellular proliferation, differentiation and maturation. Exon 15 of PKD1 codes for the Ig like PKD domains. The PKD domain is found in the extracellular region of the PC1. The earlier functional and structural analyses on cell lines show that these domains play an important role in cellular interaction by homophilic interactions and they are necessary for the normal functioning of PC1. There are predictions that mutations in the PKD domains are associated with cystogenesis. Hence in my opinion it will not be wrong to say that these two new mutations directly or indirectly are associated with ADPKD due to the PKD1 gene. Further validation on the effects on these mutations can only be done by structural and functional analysis of the mutated PC1 protein, which is beyond the scope of this project.