Cyclic di-AMP is one of the recently discovered secondary messengers in bacteria. Since its discovery in 2008, the inevitable role of c–di-AMP has been identified in various bacterial species. It regulates different bacterial physiological processes including host-pathogen interactions. It plays a significant role in the regulation of normal growth and fatty acid metabolism in Mycobacterium smegmatis. It also helps Staphylococcus aureus to grow in low-potassium concentration and also maintains DNA integrity in Bacillus subtilis. Cyclic di-AMP is involved in establishing bacterial infections by coordinating host-pathogen interaction. Alteration in the level of c-di-AMP was found to be detrimental for many bacteria. Cyclic-di-AMP is produced from two ATP molecules by diadenylate cyclase (DAC) enzyme and is degraded to 5ˈ-phosphadenylyl-adenosine (pApA) by phosphodiesterase (PDE) enzyme. Recently, DNA integrity scanning protein (DisA) has been identified in M. smegmatis, having diadenylate cyclase activity. This protein has shown the ability to synthesize c-di-AMP from ATP. Currently, less information is available about the regulatory pathways of this protein. In order to study the functions of this protein, we intend to clone and purify DisA protein from M. smegmatis MC2 155. In this project, disA gene from M. smegmatis MC2 155 was amplified by using appropriate primers. The amplified fragment was digested and ligated into pET21b vector. The vector was then transformed into competent E coli DH5α cells. Plasmid (pET21b-disA) will be isolated and digested to check proper insert size, followed by sequencing and purification of DisA protein.

Mycobacterium smegmatis are gram positive bacteria mostly residing on soil and water. Their growth is comparatively slower than other bacteria with a generation time of 3.5 hours. Their cell wall consists of mycolic acid. These hydrophobic cell wall makes them resistant to antibiotics. Mycobacterium tuberculosis is the prime source of tuberculosis in humans [​Hett and Rubin 2008​]. According to WHO, tuberculosis is one of the top ten causes of death worldwide. It is extremely depressing to know that India accounts for 64% of new TB cases every year.

Signaling nucleotides are present in all forms of life. Cyclic-di-AMP is one of the recently discovered secondary messengers in the list which is predominant in gram positive bacteria. It was seen associated with the crystal structure of DisA protein [​Romling et al 2013​] [​Devaux et al 2018​]. Knowing more about the biology of c-di-AMP can open up new paths for research. Production of c-di-AMP is increased during stationary phase in S. aureus [​Corrigan et al 2015​]. As a result it might have a great role in bacterial survival. It helps many bacteria to survive in various stressful conditions. Cyclic-di-AMP also ensures that DNA integrity is maintained at the time of sress [​Corrigan and Gründling 2013​]. It plays a major role in cell wall synthesis and sporulation in Bacillus subtilis [​Romling et al 2013​]. Cyclic-di-AMP synthesized by M. tuberculosis binds to macrophages and result in host-pathogen interactions [​Romling et al 2013​]. It also helps in transport and cell wall metabolism in addition to virulence and stress resistance which are critical for bacterial growth. Resistance to β-lactam drugs were seen reduced when c-di-AMP levels were decreased [​Romling et al 2013​]. Cyclic-di-AMP binds to a receptor or target proteins and control specifc cellular pathways [​Corrigan and Gründling 2013​]. It was observed that c-di-AMP controls cell division in S. aureus [​Corrigan et al 2011​]. Despite its importance, the role of this secondary messenger in M. smegmatis is not studied widely. Very little information is available about the signaling pathway mediated by c-di-AMP and the alteration in its level due to various external conditions.

Cyclic-di-AMP is produced from two ATP molecules by diadenylate cyclase (DAC) enzyme and is degraded to 5ˈ-phosphadenylyl-adenosine (pApA) by phosphodiesterase (PDE) enzyme ​Fig 1​. 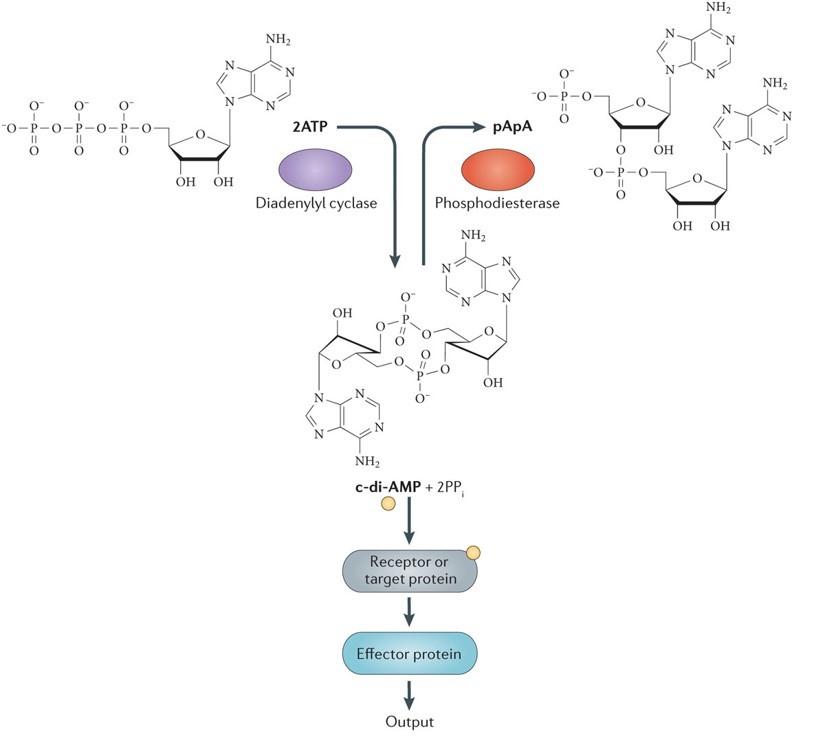 Synthesis and hydrolysis of c-di-AMP

This study was carried out as a short term objective to clone c-di-AMP synthesizing gene (disA) and to purify DisA protein for use in further studies. 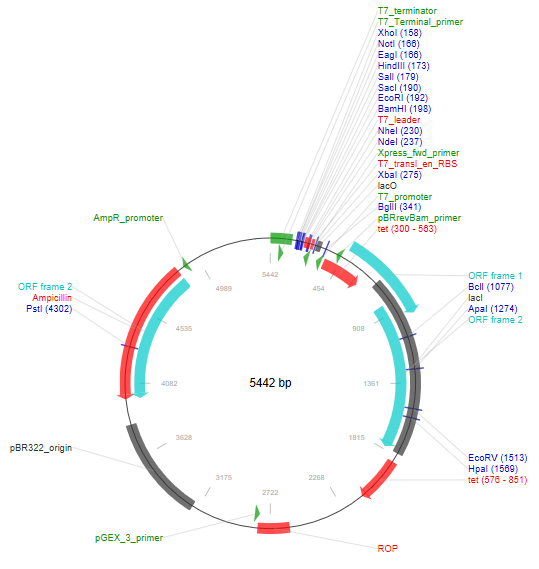 2. The supernatant was discarded and the harvested cells were resuspended by adding 450µl of P1 resuspension buffer.

3. 50µl lysozyme was added to it and incubated overnight at 37°C.

7. 1 ml from Chloroform-Isoamyl alcohol mixture (24:1) was added and mixed by inverting the tube few times.

9. Upper aqueous layer was transferred to another eppendorf tube.

10. Isopropanol was added as 70% of total volume and the tube was inverted few times to see a white thread like precipitate of DNA.

12. The supernatant was discarded and the pellets were washed with 1ml of 70% ethanol.

14. The pellet was air dried until ethanol was completely removed.

Nanodrop spectrophotometer and nanodrop thermofisher software was used for determining the concentration of genomic DNA with milliQ water as blank. The concentration was measured in ng/µl.

Identification of the sequence of gene of interest

Sequence of disA gene was identified from NCBI website. The gene accession number MSMEG_6080 was obtained from the whole genome of wild type M. smegmatis MC2 155 chromosome in FASTA format.

It is used to amplify a gene sequence using a template strand which has the sequence of interest. DNA polymerase helps in synthesizing new strands of DNA using dNTPs and two sets of primers. Mg2+ required by the polymerase enzyme is supplemented by the Phusion buffer.

PCR was done for 36 cycles.

Restriction digested samples were run on 0.8% agarose gel and visualized under UV transilluminator for bands.

Competent cells are those cells which can take up DNA and be transformed. Competence results from alterations in the cell wall making it permeable to large DNA molecules.

pH was adjusted to 5.8 with 0.2M acetic acid using pH meter. It was then filter sterilized and stored in a light proof environment.

pH was adjusted to 6.8 with 1M NaOH using pH meter. It was filter sterilized and stored in a light proof environment.

Competent cells of DH5α were prepared by using RbCl2. Heat shock method was followed for transformation. pET21b vector was transformed into DH5α cell. After transformation competency was checked by spreading the cells in ampicillin containing LB-agar plate for overnight. Through transformation bacterial cells takes up pET21b from its environment and maintains it in a heritable form. Rb2+ ions bound to the bacterial cell membrane and induced the cell to take up plasmid during heat-shock method as it develops pores. Sudden chilling on ice closes the pores immediately. Antibiotic resistance gene in the plasmid acts as marker [​Fig 2​]​. 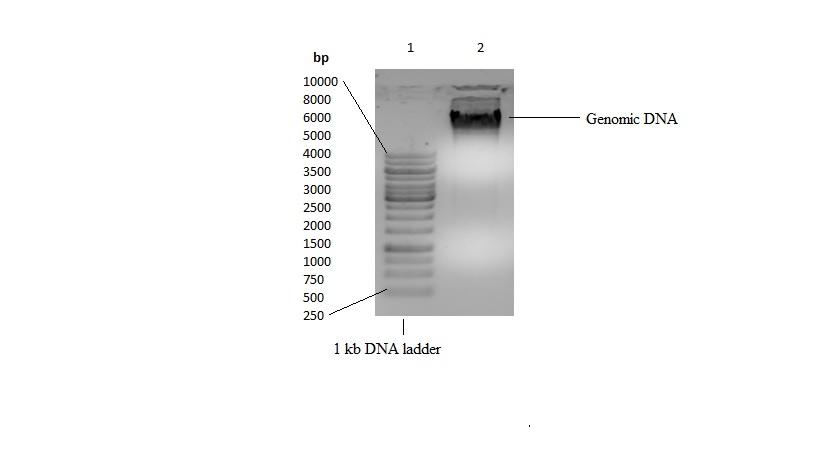 The following results were observed through nanodrop:

pET21b plasmid was extracted from transformed DH5α cells. Plasmid is required as it acts as the vector by taking up the gene of interest and transforming in host cells where it makes multiple copies of it. Extracted plasmid showed circular, single stranded; supercoiled; covalently bonded; linear; nicked/relaxed circular bands when 2µl of samples were loaded along with 1X DNA loading dye in 1% agarose gel. Ampicillin resistance gene present in pET21b acts as a marker for this plasmid [​Fig 2​​]. It also has restriction sites of EcoRI and HindIII. 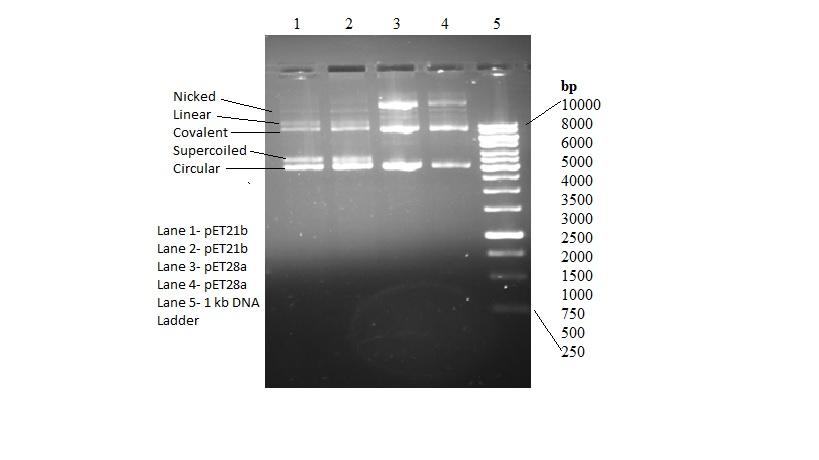 PCR amplification of the gene of interest (disA) was done using the forward and reverse primers. Samples were then run on a 1% gel to analyze the bands. Expected size of ~1.2 kb was obtained after PCR. 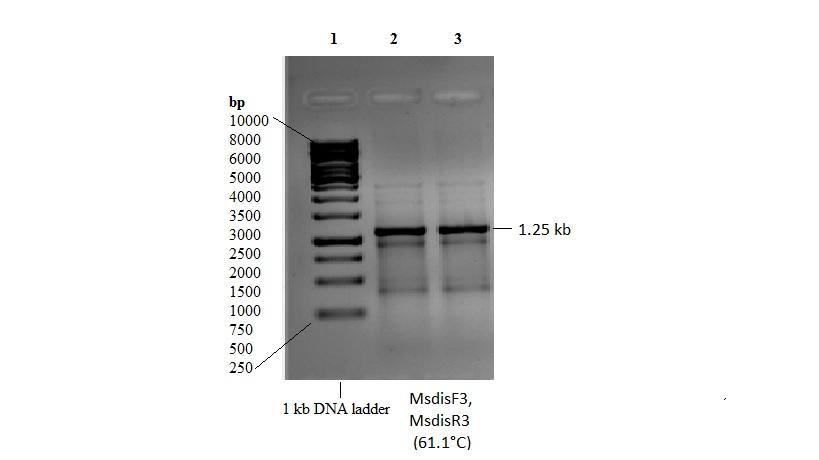 Restriction digestion was carried out for pET21b and MsdisF3R3 using EcoRI and HindIII restriction enzymes. Digested fragments had sticky ends which were then ligated by T4 DNA Ligase. On analyzing on 1% agarose gel, both the fragments showed expected size corresponding to their molecular weight. After restriction digestion single band of plasmid was only visible. To ~500ng vector, 100ng insert was ligated afterwards. 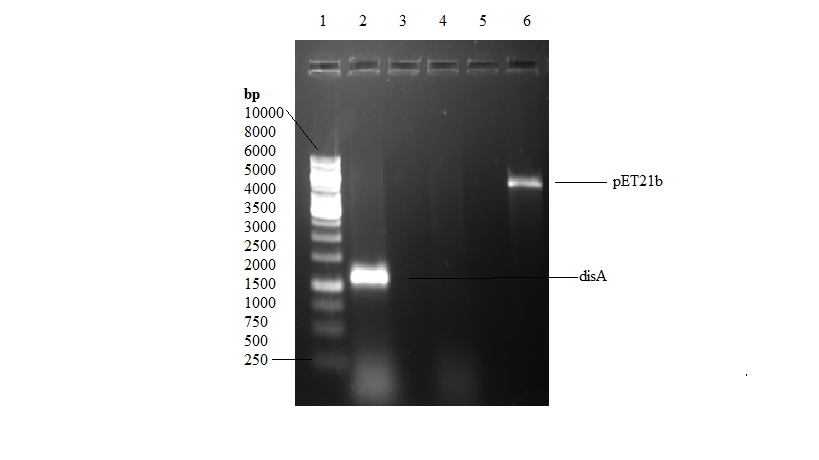 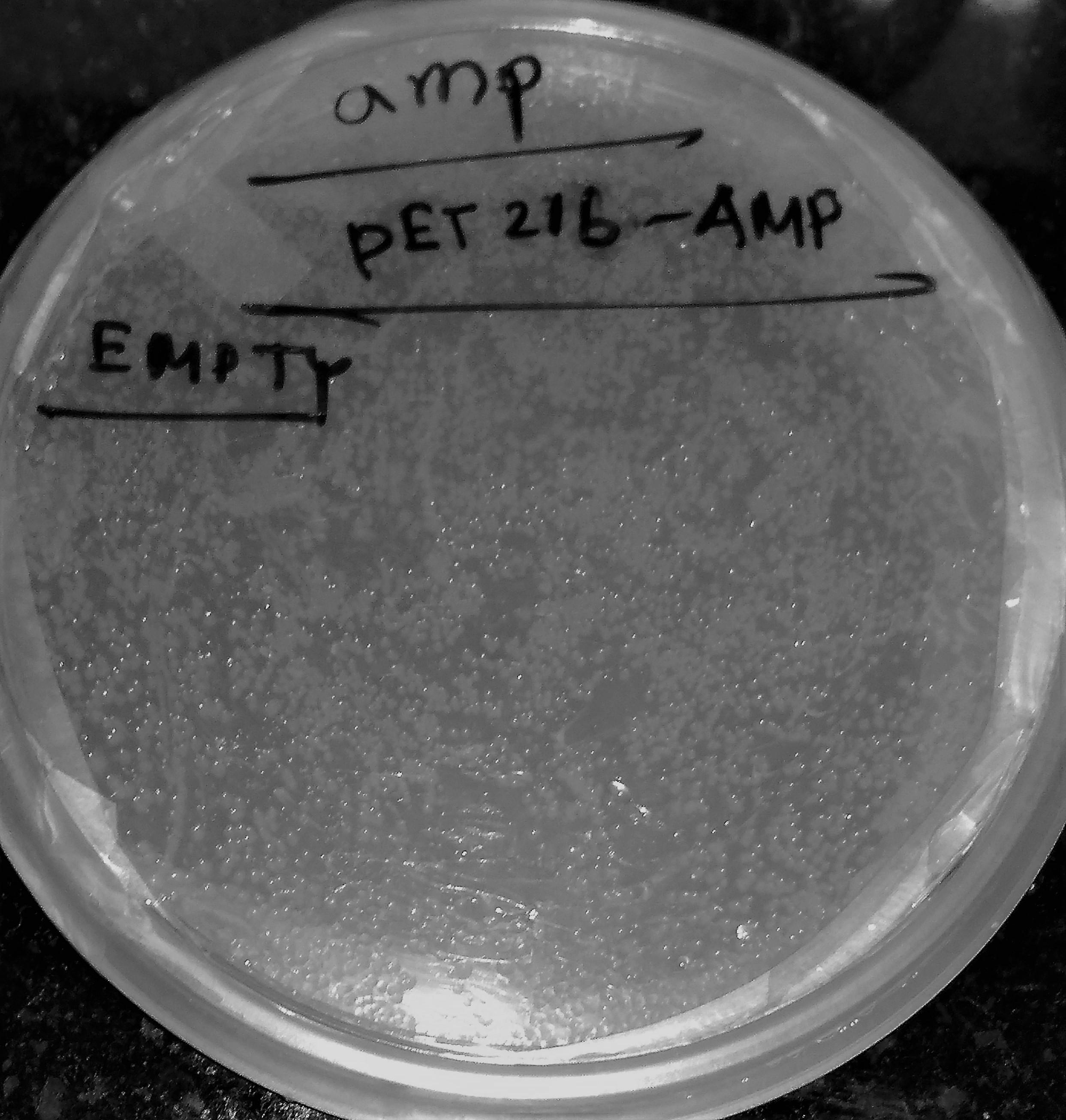 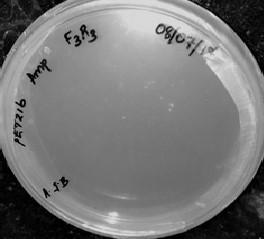 In this research we attempted to clone c-di-AMP synthesizing gene, disA from M. smegmatis MC2 155. From these DH5α cells, plasmid isolation and restriction digestion of those isolated plasmid need to be carried out before sequencing to check proper insert size. Further, the transformation of these plasmids is needed to be done in E. coli BL21 DE3 cells. Then, DisA protein can be over expressed by IPTG induction followed by purification in Ni-NTA column chromatography.

I would like to express my sincere thanks and heartfelt gratitude to Prof. Dipankar Chatterji, Molecular Biophysics Unit, Indian Institute of Science for allowing me to work in his lab and for providing me an excellent platform for development. I thank him for his valuable guidance and timely discussions, which always inspired me.

I am indebted to IASc-INSA-NASI for giving me such a great opportunity to undergo a resourceful project.

I am extremely grateful to my mentor Dr. Avisek Mahapa for being supportive and pointing out my mistakes. In spite of his busy schedule he has been a constant support in the lab and has shown great patience during my project. I am thankful for that.

I am also thankful to all my seniors in the lab Anushya Petchiappan, Neerupma Bhardwaj, Unnati Patel, Sudhanshu Gautam, Sujay Naik, Pranami Goswami, Jigyansa Mishra, Anil Kumar, Sunita Prakash and Dinesh V for their valuable suggestions and help during the whole span of my work. They were very friendly and I am thankful for the lab treat, food and the wonderful moments I had with them. It has been my privilege to work with these extremely talented and great minds.

I would also like to thank my fellow trainees Utkarsh Anil Mahajan, Pallabi Malo, Gautham U, Saranya Kolapalli and Anubhav Dhar for being helpful and supportive throughout my project. I also thank my friends and roommates who gave me wonderful company throughout the stay in Bengaluru.

Achan, Amma, Chinnu and my friends for their constant encouragement, blessings and love.