Under the guidance of:

Though several methods are available to identify the height of the boundary layer, the coarse temporal and spatial resolutions may limit us in reckoning the height of the atmospheric boundary layer. LIDAR offers high resolution measurements on a continuous basis. LIDAR is one of the active remote sensors of atmosphere that works on the principle of radar but employs laser with fine pulse widths. This research reports various data analysis techniques applied on the ground-based Elastic Backscatter LIDAR (EBL), located at the National Atmospheric Research Laboratory (NARL), Gadanki (13.45°N, 79.17°E), Tirupathi, India, that gathers data to detect, qualitatively, the atmospheric mixed layer height (MLH). A theoretical height of the atmospheric mixed layer is computed using empirical equations by taking cumulative daytime heating and lapse rates as inputs. Once theoretical values are obtained, an attempt is made to compare them with LIDAR data located at NARL. The theoretically computed MLH values are derived using an empirical equation formulated by R. Stull. In addition, different mathematical methods including, gradient, double gradient, logarithmic gradient, statistical method i.e. variance method, and a wavelet based method i.e. wavelet co-variation transform (WCT) are effectively used to find MLH. Although, diurnally an inter-comparison of various analytical techniques shows better agreement, it is observed that WCT method is able to find MLH with greater accuracies.

The Atmospheric Boundary Layer (ABL) or the Planetary Boundary Layer (PBL) can be defined as the lowest portion of the Earth’s atmosphere that is, in general, strongly influenced by the thermal and dynamical interactions of the underlying surface. Noteworthy exchange of momentum, moisture, heat and mass takes place between the underlying surface and the atmosphere. Sharp variations in velocity, temperature and mass concentration occur in this layer and hence it is of crucial dynamical and thermo dynamical importance. The atmospheric flow in the ABL is directly influenced by the Earth’s surface and it responds to changes in the surface forcings (​Rotach 2015​  ) (​Fig 1​​). A proper understanding of ABL is essential as it is widely used in various atmospheric models and experimental considerations. It is well known that transport of quantities including, pollutants, energy, water vapor and aerosols is governed by kinematic variables such as wind and, hence, the boundary layer height (BLH) plays an important role in both theoretical and numerical meteorological studies (​Stull and Ainslie 2006​). Most importantly, the study of ABL/PBL provides information about pollutant dispersion in the atmosphere (​Stull and Ainslie 2006​). Hence it is necessary to study the growth of PBL. Further, PBL shows distinct diurnal trends with a stable layer at nighttime and convective layer at daytime (​Fig 2​​). 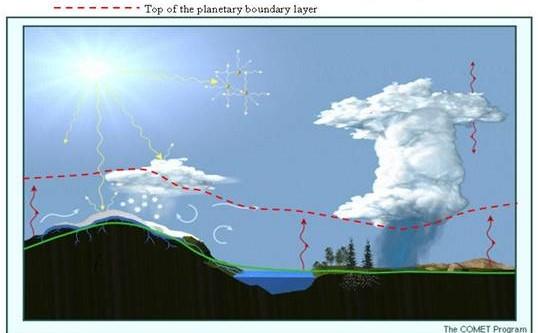 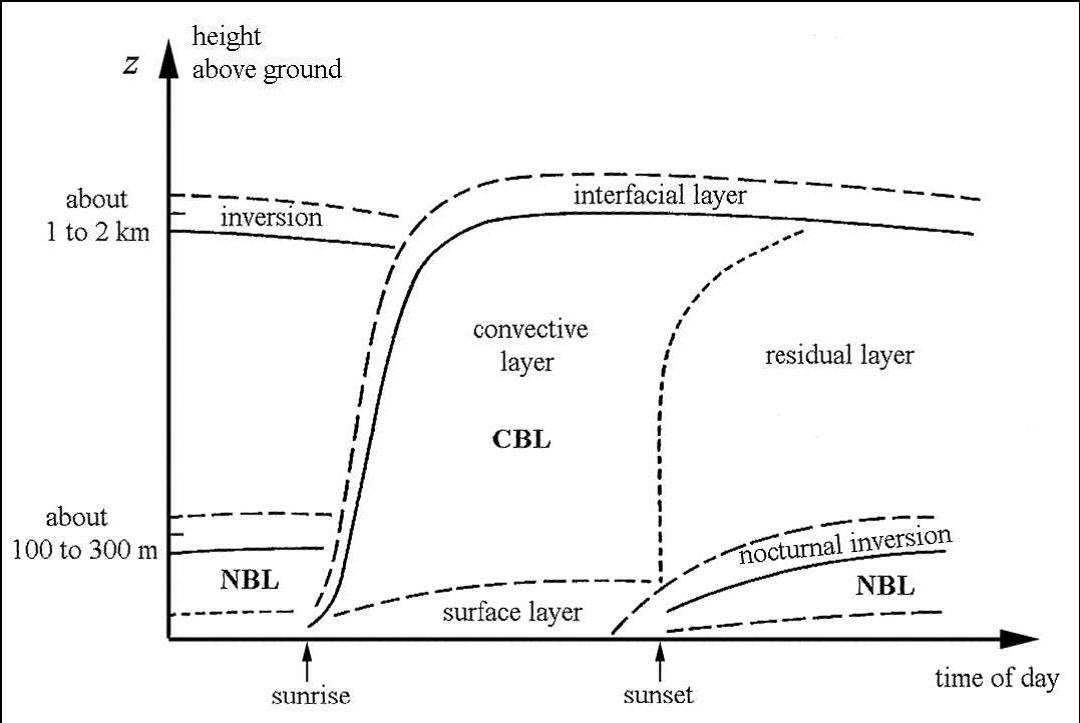 The above picture shows distinctive evolution of ABL. [Adapted from ​Garratt 1992​]. 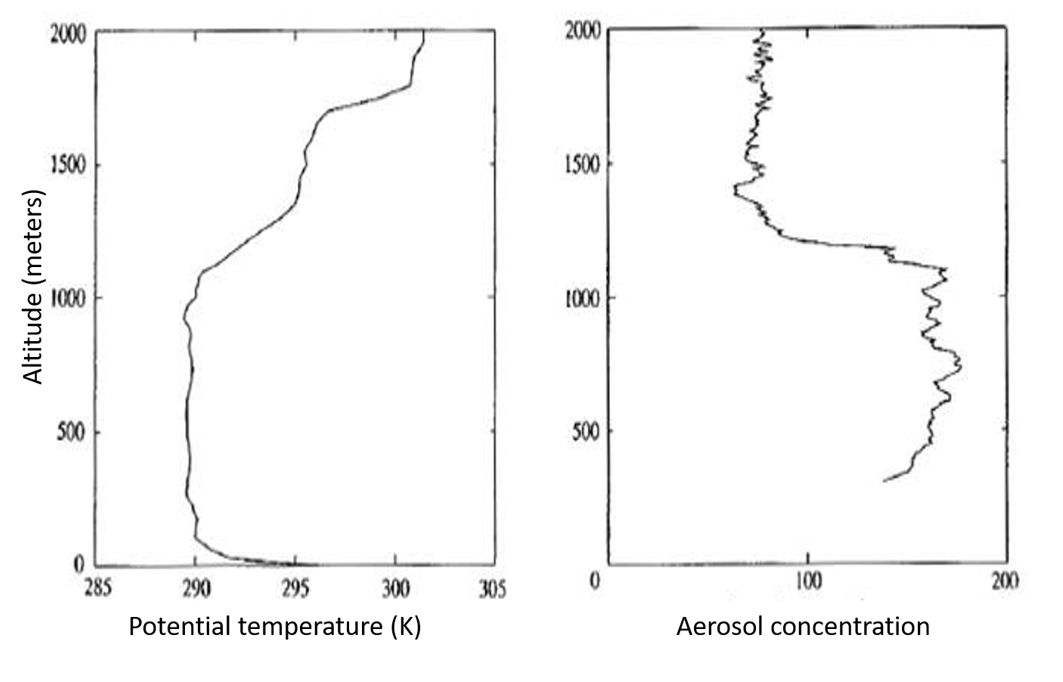 There are several ways to measure ABL/PBL height (ABLH/PBLH). Many ground-based (LIDAR, Ceilometer), flight-based remote sensing instruments (radiosonde balloon-borne instrument and CALIPSO satellite (https://www-calipso.larc.nasa.gov/tools/read_sw/index.php) can be used to determine PBLH. PBLH is generally derived from data measured with radiosondes, which give thermodynamic measurement variables including, temperature and pressure (​Hennemuth and Lammert 2006​). Nevertheless, there is always a lack of resolution if one tries to find ABLH/PBLH as the temporal estimates derived from radiosonde are restricted to the launch-time of the radiosondes, which are typically between 2 and 4 times per day. On the other hand, LIDAR measurements dependent on aerosol (tiny particles that hand in the atmosphere in solid and liquid forms) concentration in the atmosphere as its concentration is high compared to the free atmosphere above and this contrast is the basis for PBLH detection from LIDAR measurements (​Cohn and Angevine 2000​).

LIDAR technique is utilized to study the altitude profiles of aerosols, clouds, winds, temperature and humidity layers in the atmosphere (​Nagamuni et al 2017​). It is true that a large variety of instruments are available to measure the PBL height and there is also a large variety of algorithms used to determine the PBL depth. In this study, we have made an attempt to estimate PBL height using the Elastic Backscatter LIDAR (EBL) which is located at NARL. We acquired the raw data from EBL and converted it into readable ASCII format. Then, we applied several analytical methods including the gradient method (GM), double gradient method (DGM), logarithmic gradient method (LGM), variance method (VM) and a signal processing method which is Wavelet Co-variance Transform (WCT) to study the EBL data.

As stated already, the value of MLH can be computed theoretically using an empirical equation formulated by R. Stull (1988). According to that empirical equation, the height of the Atmospheric Boundary Layer can be calculated using the formula

where, ‘zi’ is the height of the mixed layer,

‘QAK’ is the cumulative daytime heating and

This equation, hence, requires cumulative daytime heating and lapse in the layer as input parameters.

Cumulative daytime heating can be calculated using the following equation

where, ‘FHmax’ is the maximum heat flux,

‘t’ is the arbitrary time and

‘D’ is the day duration.

As the data contains different values including, short-wave downward radiation, direct radiation, diffuse radiation and long-wave downward radiation, the required heat flux values have been extracted and are substituted in the above expression. In order to verify the monthly variations of cumulative daytime heating, we have plotted various months’ (Jan, Feb and March 2014) diurnal trends in​ ​Fig 4​​. The trend of cumulative daytime heating during Jan, Feb and March 2014 has been observed and those results are presented in ​​Fig 4​​. It is obvious from this figure that diurnal variations of cumulative heating shows a Gaussian shape. 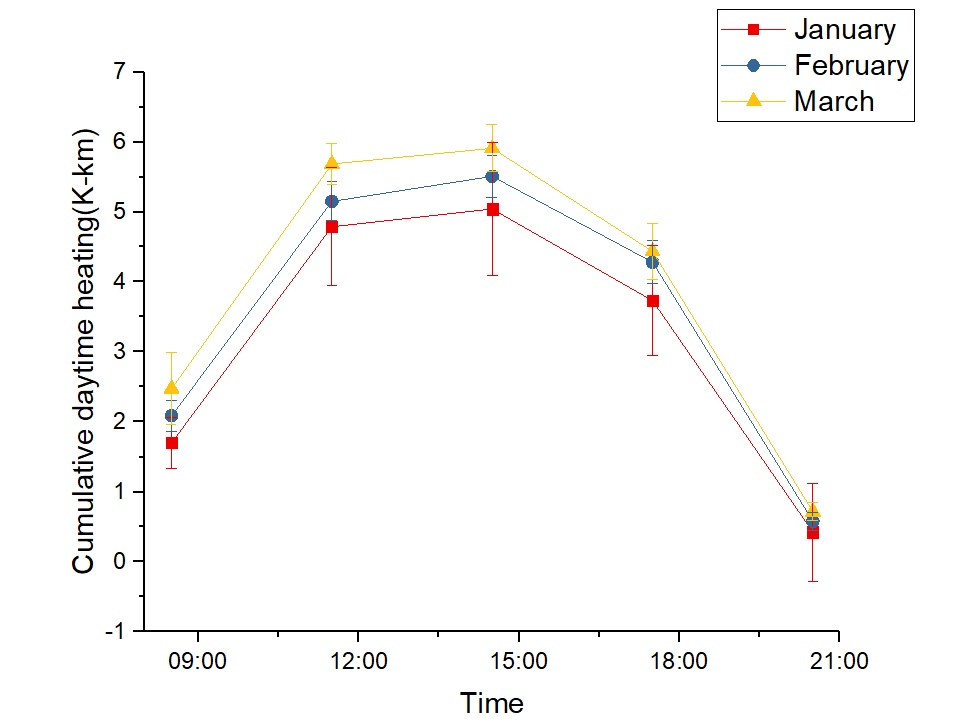 Variation of Cumulative daytime heating during January, February and March 2014

The same procedure is applied for the months January, February and March of 2014 to observe the variations in cumulative daytime heating and a nomogram has been developed.

Lapse rate, the rate at which temperature decreases with height, plays a pivotal role in the determination of PBL height. Lapse rate is the rate of change of atmospheric temperature. In other words, it is the slope of temperature. So, in order to calculate lapse rate, we need temperature versus altitude profile. It can be calculated using the expression

‘Ɵ’ is the temperature and

‘z’ is the altitude.

The real-time environmental applications and display system (READY) model of the National Oceanic and Atmospheric Administration (NOAA) provides archived, current and forecast meteorology around the globe (Rolph et al 2017). Hence for calculating lapse rate, the temperature profile of Gadanki (13.45°N, 79.17°E) has been acquired from the READY model. Later, from the above equation of lapse rate, lapse rate is calculated for every three hours in a day. ​Fig 5​ shows diurnal variations of lapse rate during January, February and March which depicts a near-Gaussian shape. The same procedure is applied for the months January, February and March of the year 2014 and a nomogram for lapse rate is prepared. 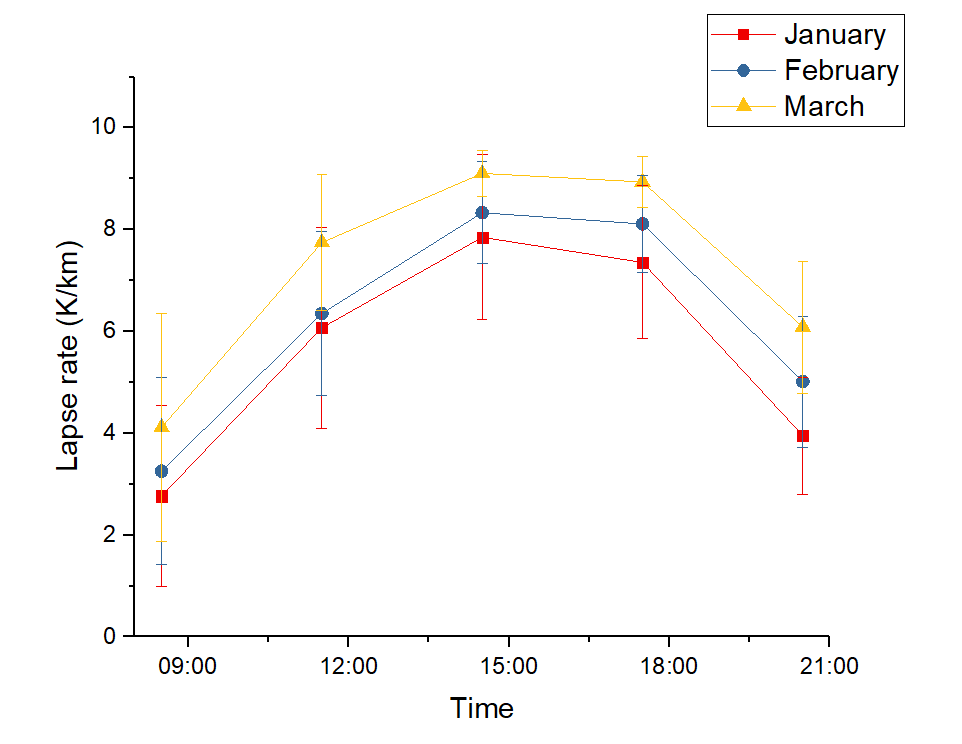 Lapse rate of the months January, February and March 2014

By substituting all the parameters in equation (1), PBL height is calculated for every three hours in a day. Likewise, height of PBL has been calculated for all the days in March, 2014. A diurnal variation of MLH has been observed in the case of PBL height. 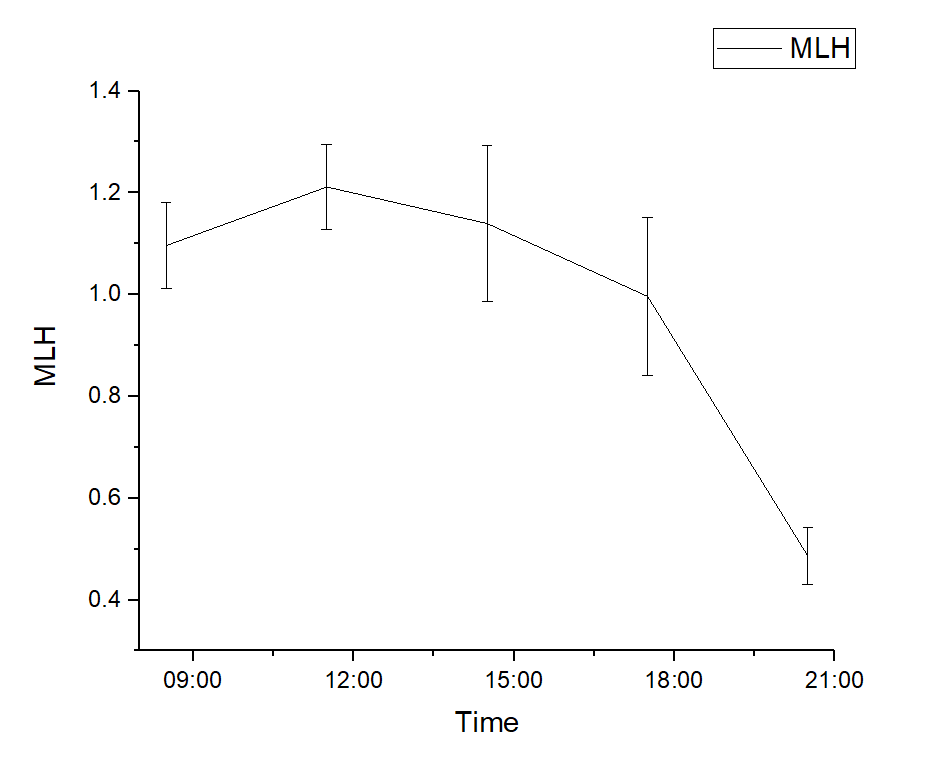 Nomogram of PBL height in the month March of 2014

Later a nomogram is prepared for comparing PBL height values of January, February and March of 2014. 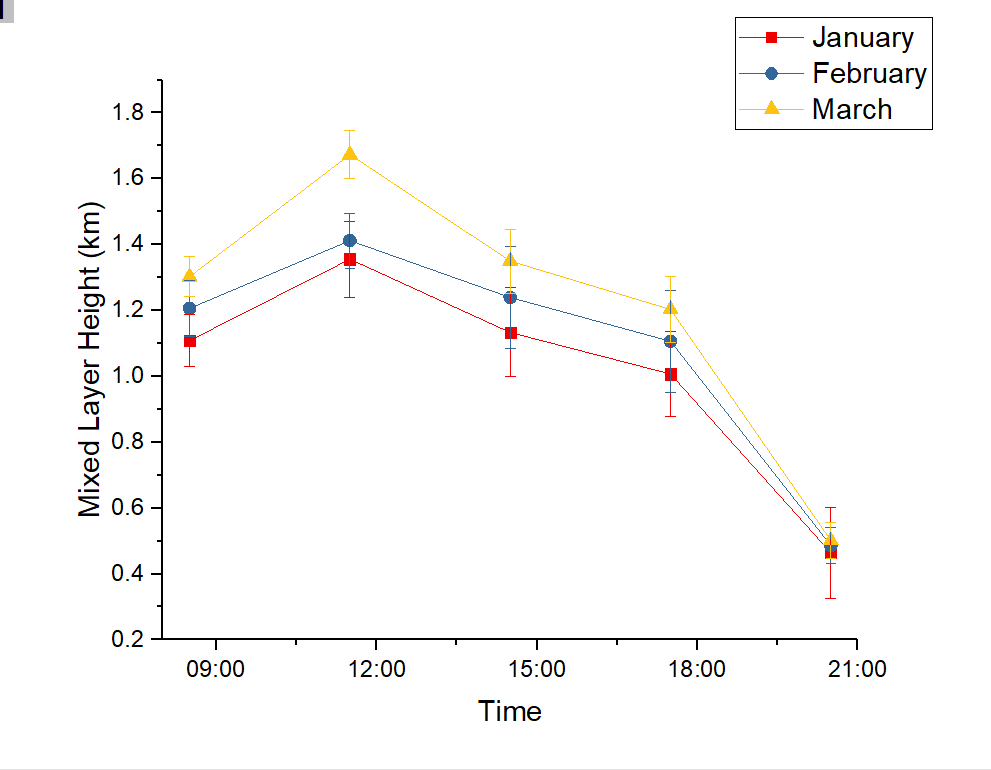 Nomogram of MLH during January, February and March 2014

After noise correction and path correction, different methods can be applied to estimate PBL height.

In the gradient method, numerical gradient (derivative) is applied to the path corrected signal (PCS) of LIDAR data. The altitude at which the gradient is minimum is considered as the PBL height. 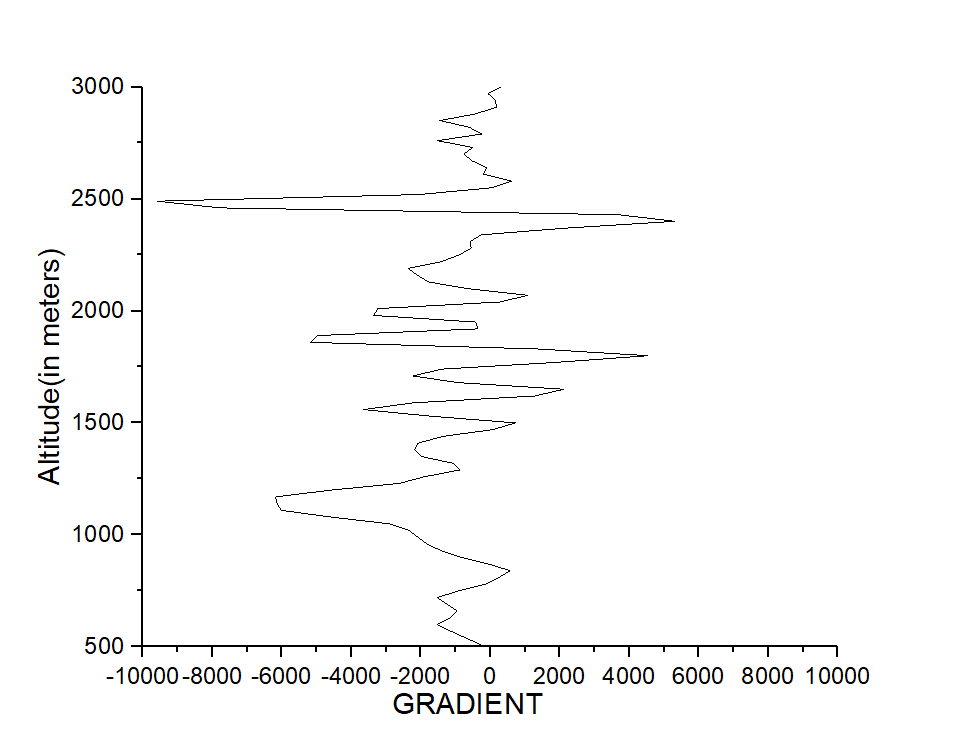 The gradient method applied on LIDAR data on 14th March, 2014

In applying the double gradient to the path corrected LIDAR signal, the altitude at which the gradient is minimum is considered as the PBL height. 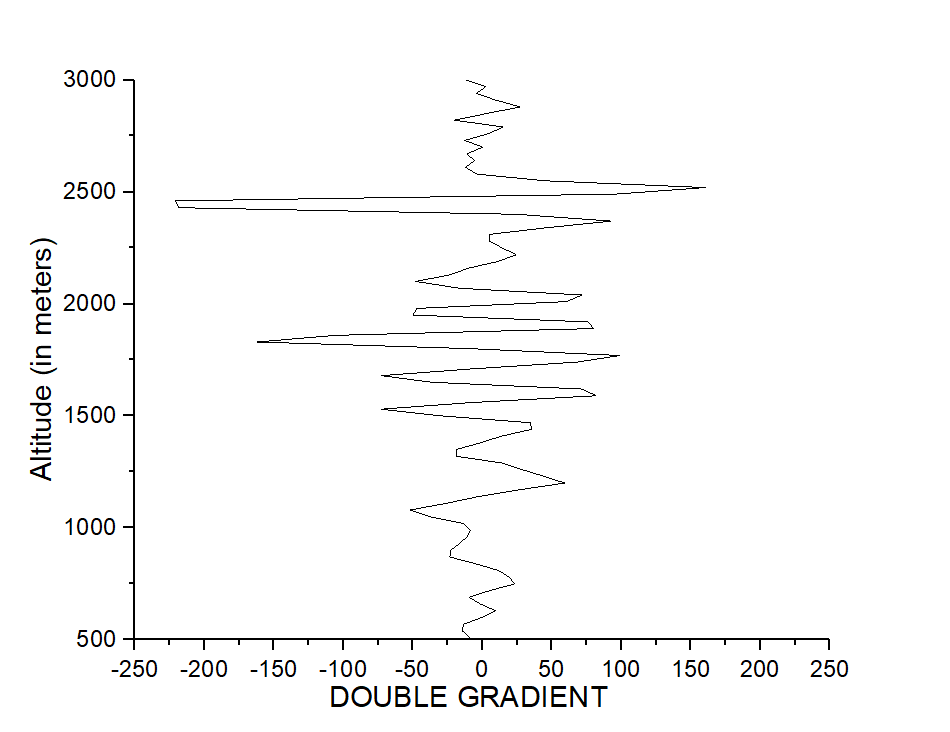 Logarithmic gradient method of PBL estimation involves applying gradient to the logarithm of the path corrected signal. The altitude at which the value is minimum is taken as the PBL height. 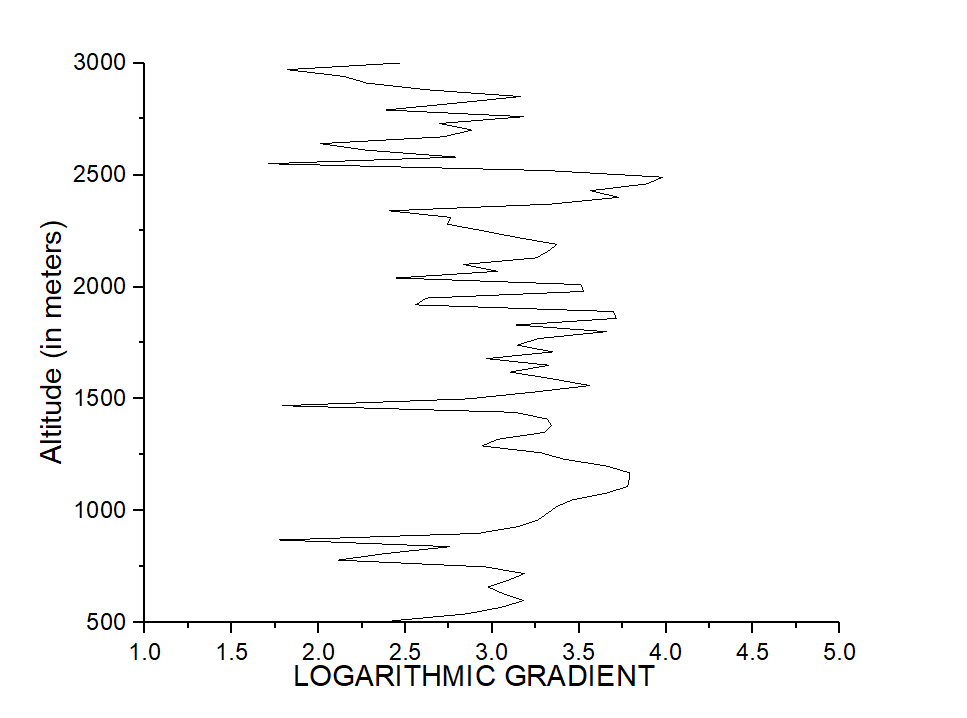 The variance method of PBL estimation is a statistical method in which variance is calculated for a set of path corrected LIDAR backscatter signals. The maximum variability determines the PBL height. 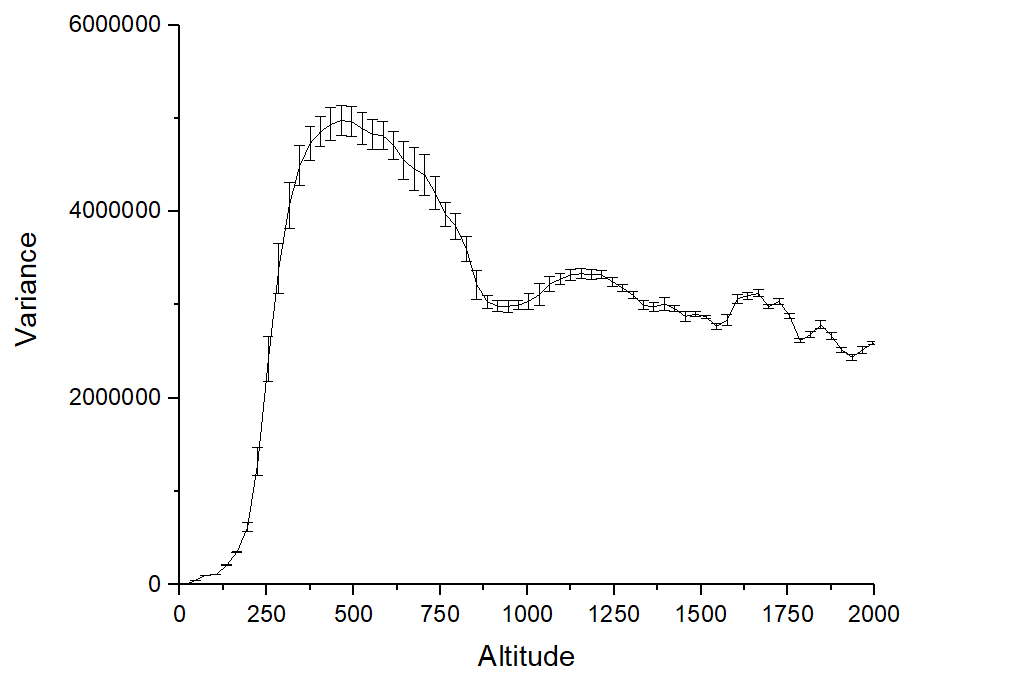 Wavelet Co-variance Technique is a wavelet based technique in which the Haar function is applied to the path corrected LIDAR signal.

Where, ‘d’ is dilation and

where ‘zl’ is the lower limit and

‘zu’ is the upper limit of the LIDAR backscatter profile.

Application of WCT method on LIDAR data on 14th March, 2014

During the two months (01 May – 28 June 2018) of my summer fellowship tenure at NARL, I have learned how to apply various analytical methods on LIDAR data and successfully calculated theoretical values and made a comparative study between them. Some of the important results out of this project are summarized hereunder.

The different analytical methods including, gradient, double gradient, variance, logarithmic gradient and WCT show excellent agreement with each other in terms of diurnal variations, although there exists a moderate difference with theoretical values.

There exist moderate differences in theoretical values, particularly, during post-sunrise and post-sunset timings, which clearly indicate that there is a need to develop better and appropriate theoretical models.

A Gaussian-shaped response has been detected in different datasets while presenting them in terms of diurnal variations, which implies that stable and convective boundary layers existed during night and daytime periods.

Further, a near-Gaussian-shaped response can easily be detected in different datasets while presenting them in terms of diurnal variations, which implies that stable and convective boundary layers have existed during night and daytime.

I am grateful to my parents who supported me morally in completing this fellowship. I am also thankful to the management of Shri Vishnu Engineering College for Women (SVECW), Bhimavaram, India, for allowing me to report to this project and thanks are also due to Dr. P S Brahmanandam (Professor of Physics) and Dr. G Uma (Associate Professor of Physics), Dept. of Basic Science, SVECW for their moral support and constant encouragement that enabled me to apply for this prestigious summer research fellowship. I am extremely thankful to Indian National Science Academy (INSA), Govt. of India, for selecting me for this research fellowship. Finally, I would like to thank Authorcafe for helping me in improving my writing skills and also for its author-friendly writing environment.